“There is no story. It’s just a question of shapes and light”
– Harry Gruyaert

Russia and the USA in the 1980’s- rivals, parallel universes, two places seeped in political turmoil and technological revolution- on opposite ends of the spectrum. But, what better way to paint a portrait of an era than to show the full palette of disorder- in Kodachrome, of course. 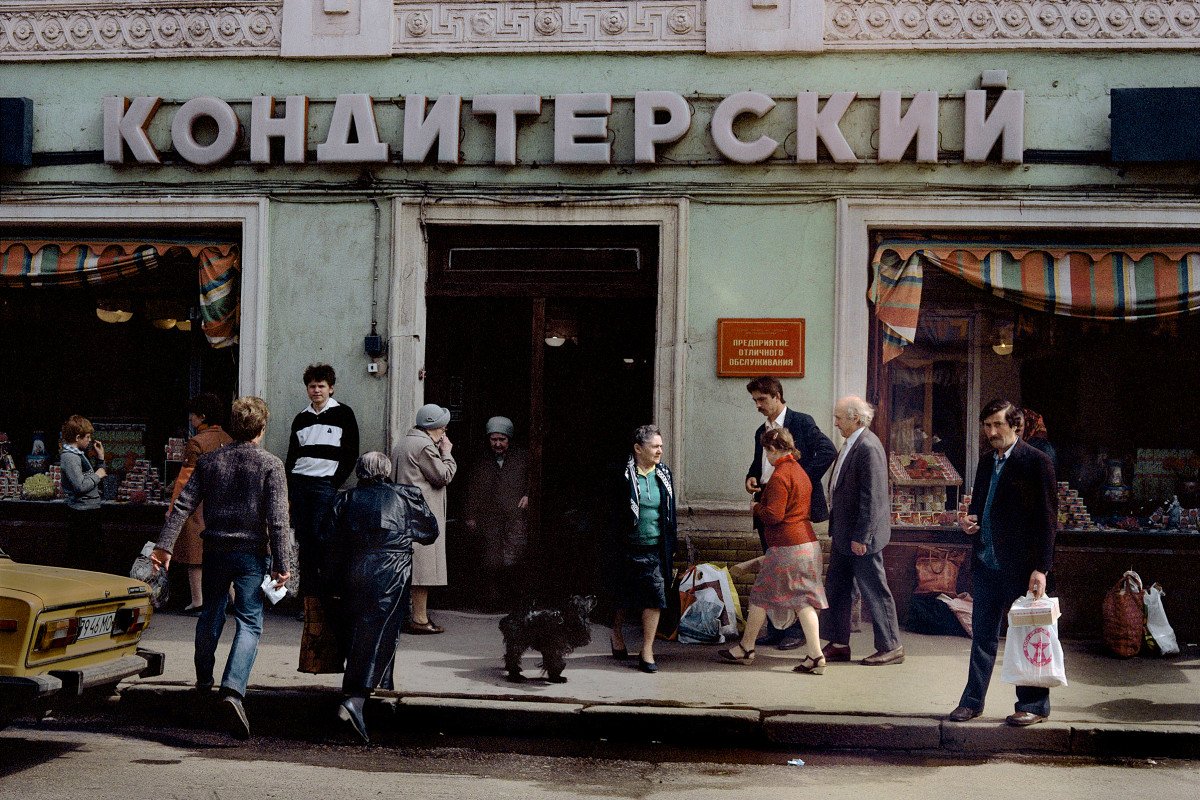 With no intention to document current affairs, Gruyaert set out in 1981, on a quest for color and sensuality, one which led him to create a collection of photos that preserve a pivotal moment in history in vibrant tones.

Capturing the austere restraint of Moscow in 1989 and the glitzy kitsch of LA and Las Vegas in 1981, these places reveal themselves in different ways. The dull blue glow of a Russian hotel lobby can say as much about society as the person who silently occupies the space. 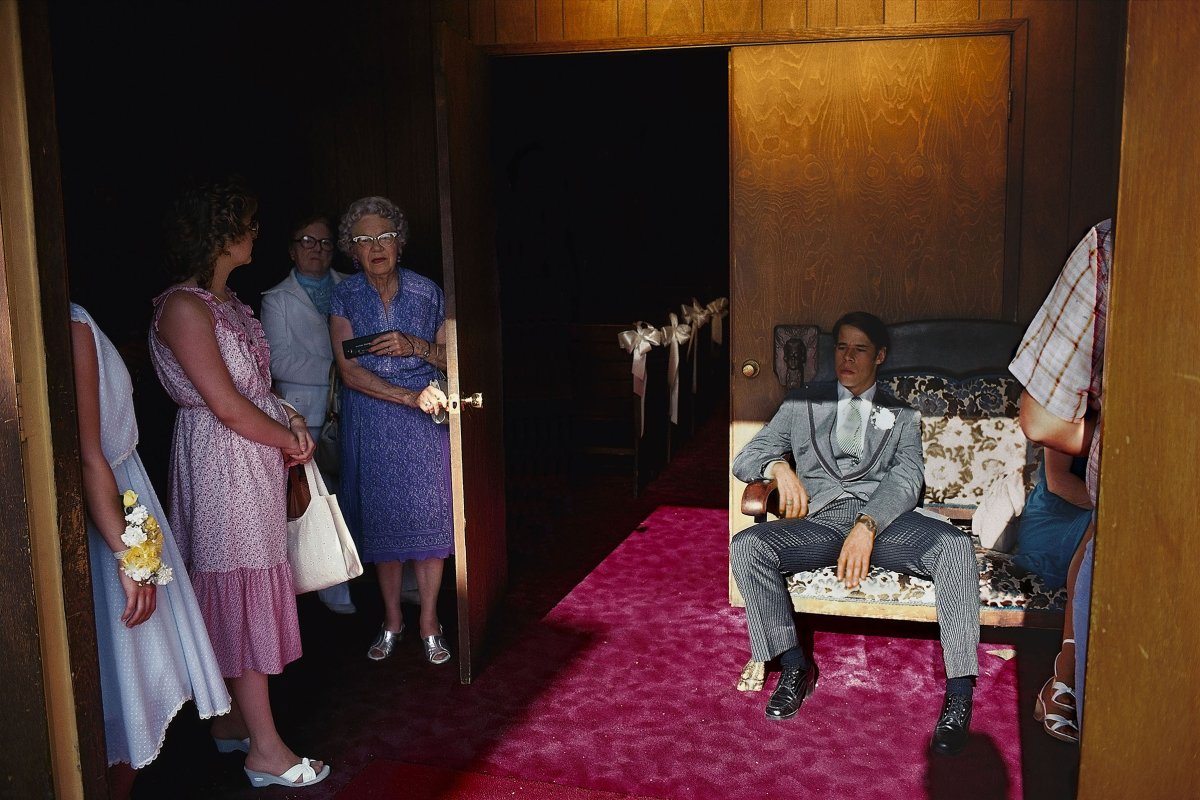 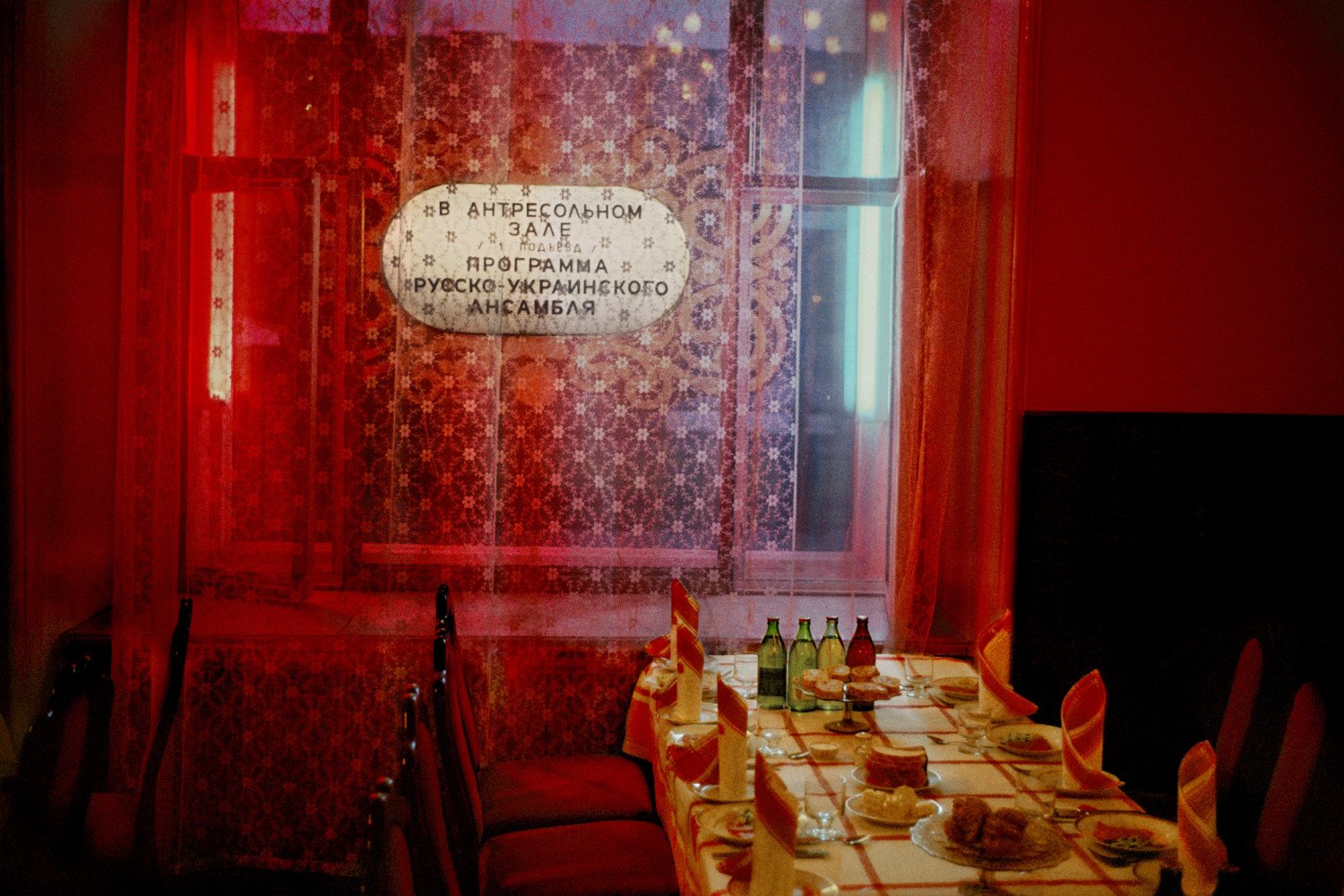 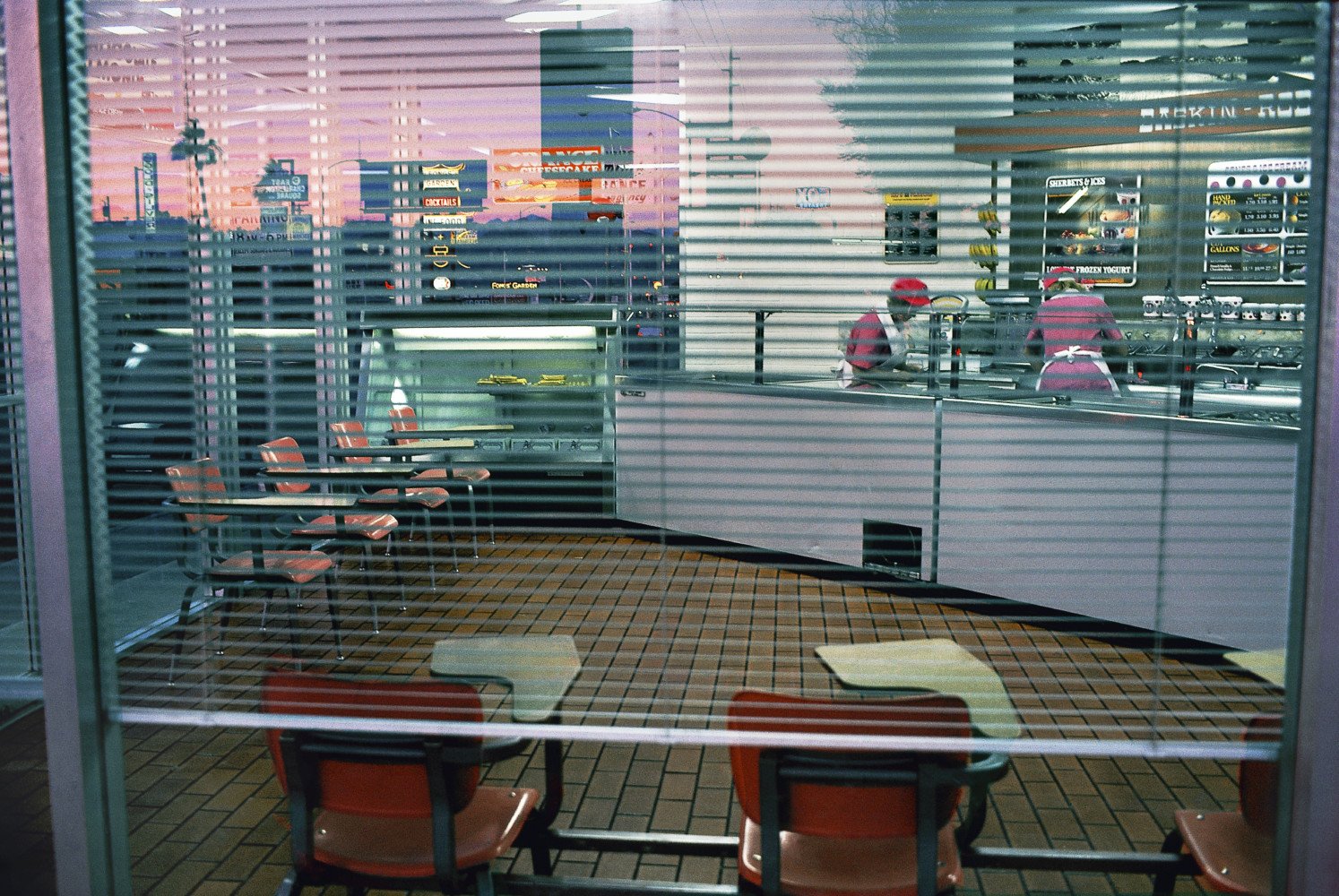 “I believe very much in physical attraction. There are things which attract me and I attract things as well. That’s really the magic of photography which really interested me; these mysterious moments and strange accidents and how certain people always attract the same situations.” – Harry Gruyaert

Gruyaert is famed for his obsession with color but is also a master in selecting landscapes, arranging shapes and knowing exactly when the light is right to shoot. These photos are an appraisal of a period, chosen involuntarily, and intuitively by their dramatic distinctiveness. 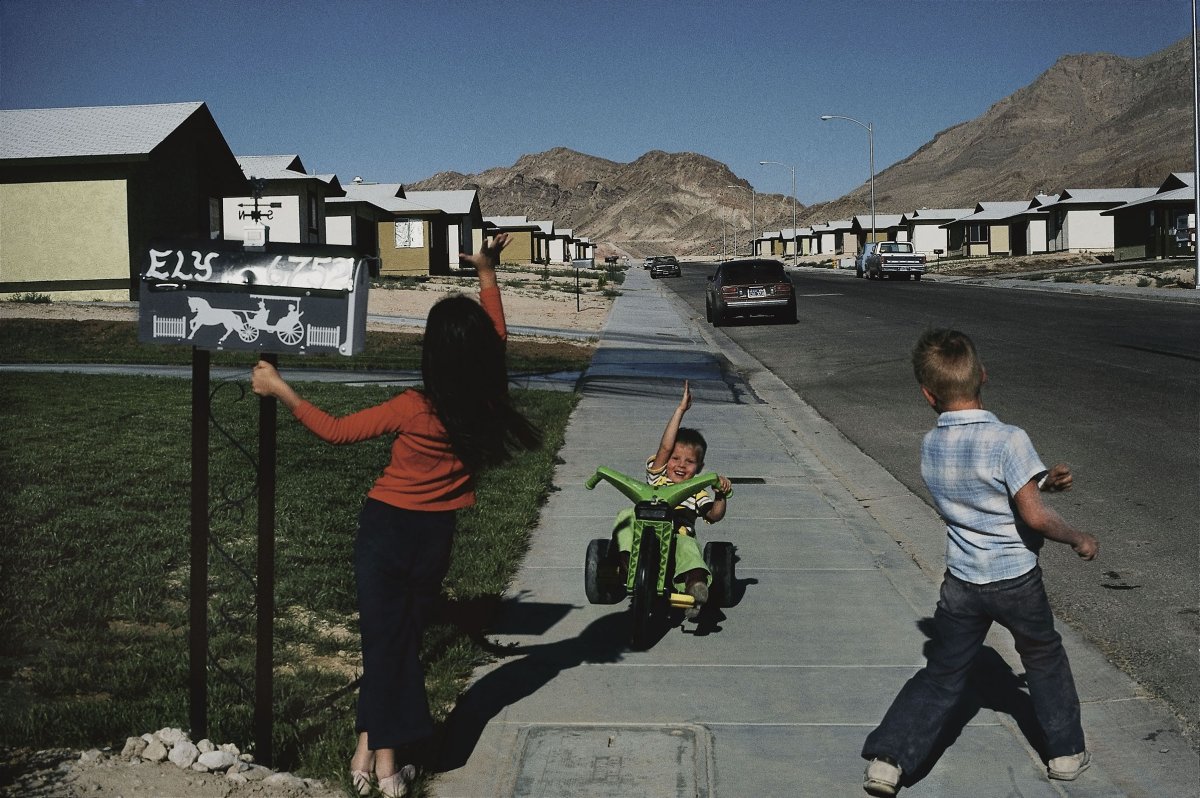 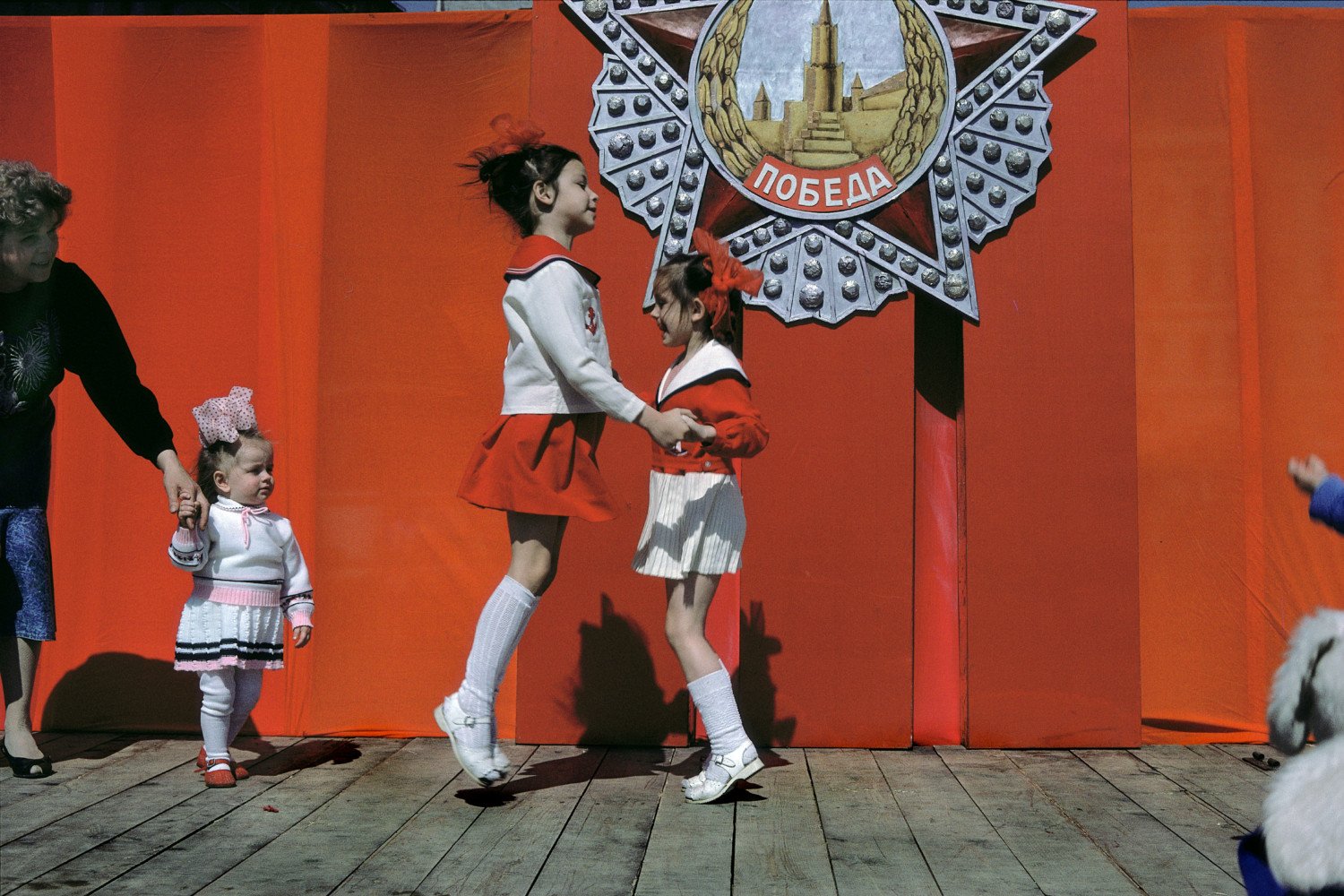 With the eyes of a painter, rather than those of a photojournalist, Gruyaert’s Russia and the USA express themselves through color and say more about the time than many of the era’s most iconic news photos. The serendipity of Gruyaert’s East and West fills each of his chosen frames; each person and object is merely part of the scene, while the real protagonist in his photos is the place.

Gruyaert’s USA pops with shiny tanned bodies and glimmering open-top cars, each tableau gleams with superficial modernity and the fragile promises of the American dream. In contrast, Gruyaert’s Moscow tells a different tale, the modest-looking streets bustle with life despite being flanked by grey buildings, the palette is dampened browns and greys with frequent surprise bursts of soviet red. 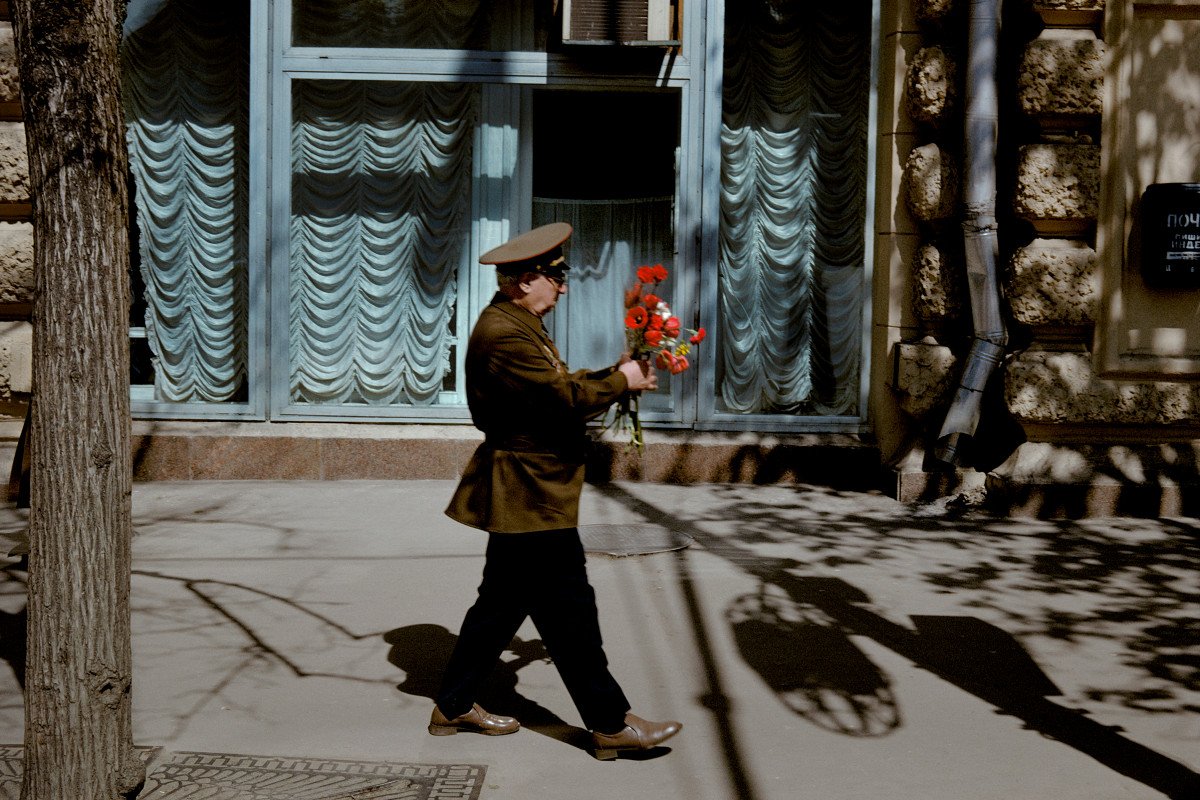 Where Gruyaert’s America is a cacophony of carefree promises and loneliness, his Moscow is a restrained and surreal playground of unpredictability. Though Cadillacs and Ladas populate each street respectively, Gruyaert manages to avoid all cliches.

The visual tropes that fill each photo just serve to reinforce the scene, as though the streets were merely set waiting for strange, serendipitous occurrences to happen. 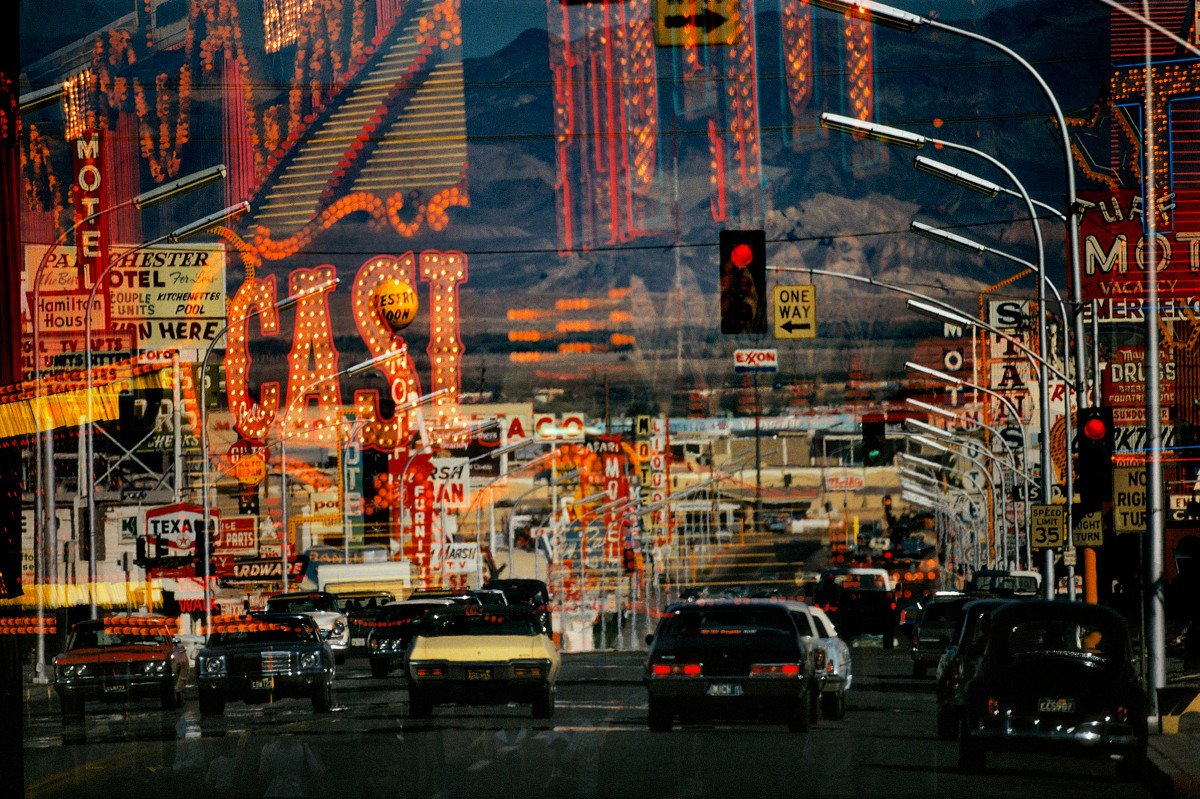 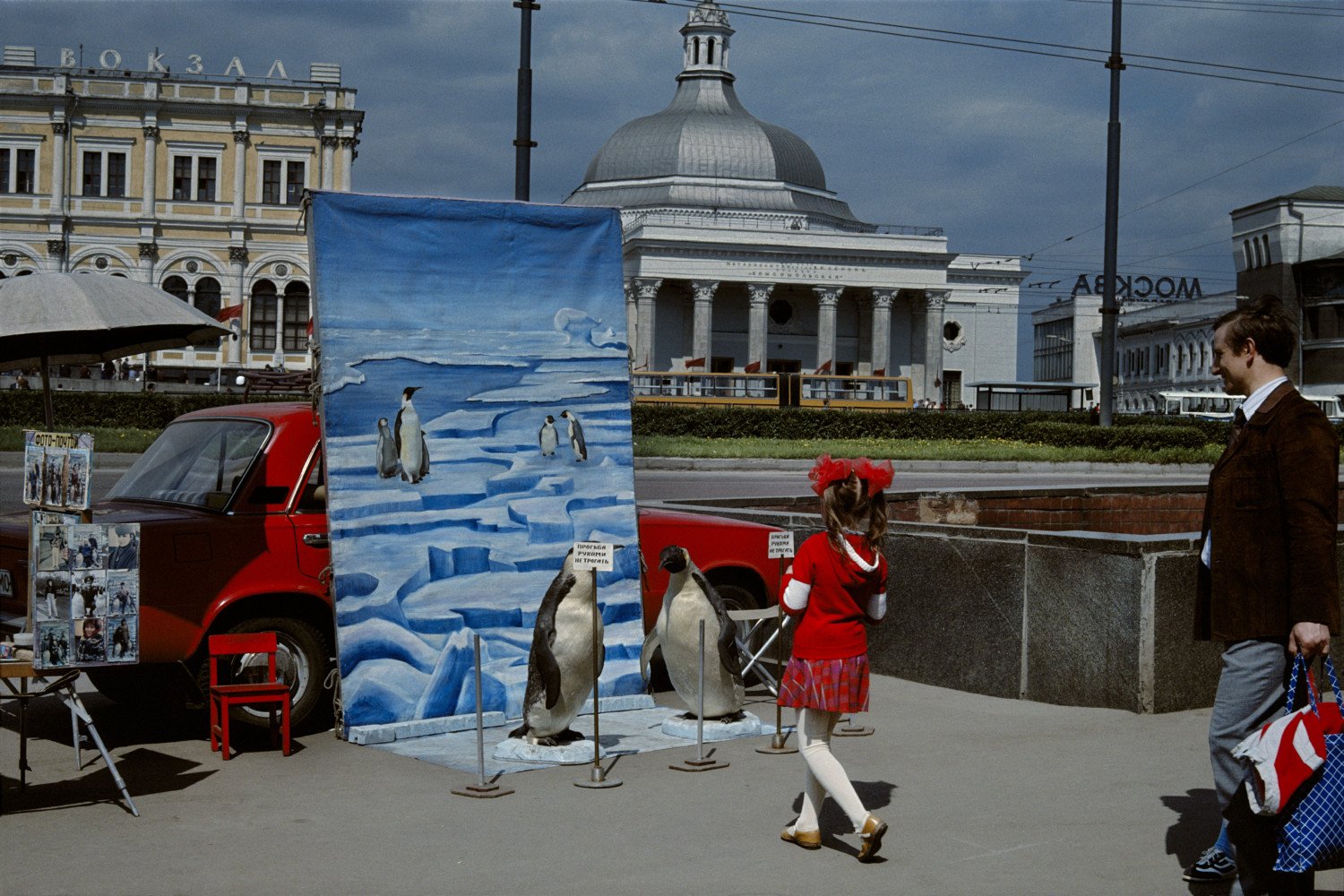 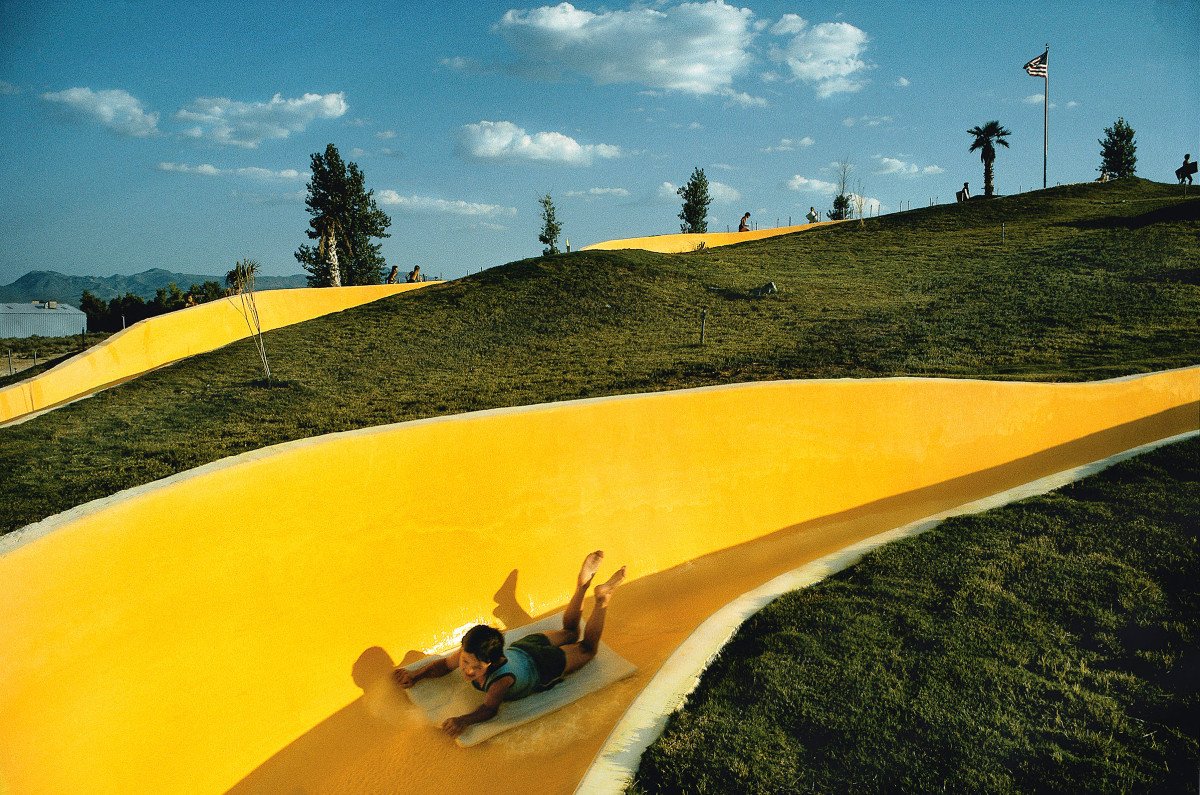 Gruyaert’s playful road trip adds layers of understanding to places which are defined in public memory through news imagery and sensationalist stories. Here, the palette, not the politics shows the drama of reality.

Gruyaert, though adept at documenting humans in bizarre situations, is by no means a humanist photographer- for him, humans are no more important than a deck chair by the pool or a trash can on the sidewalk. 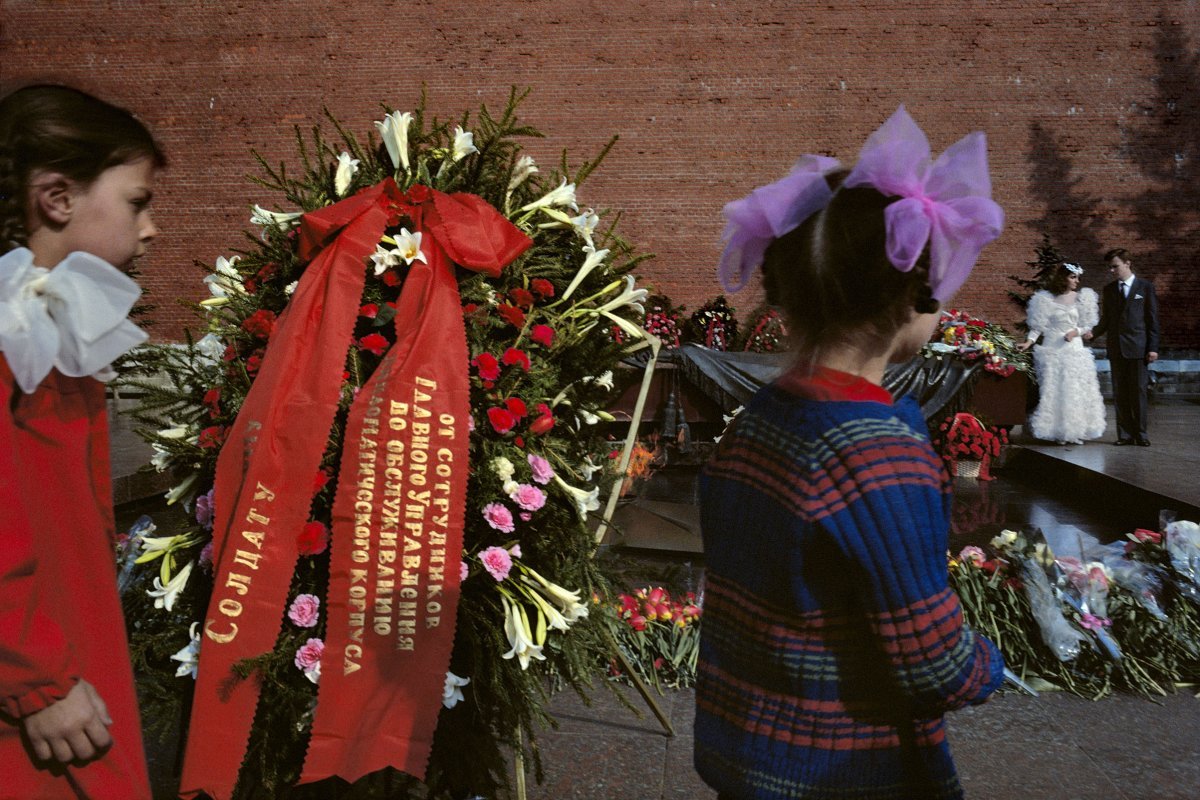 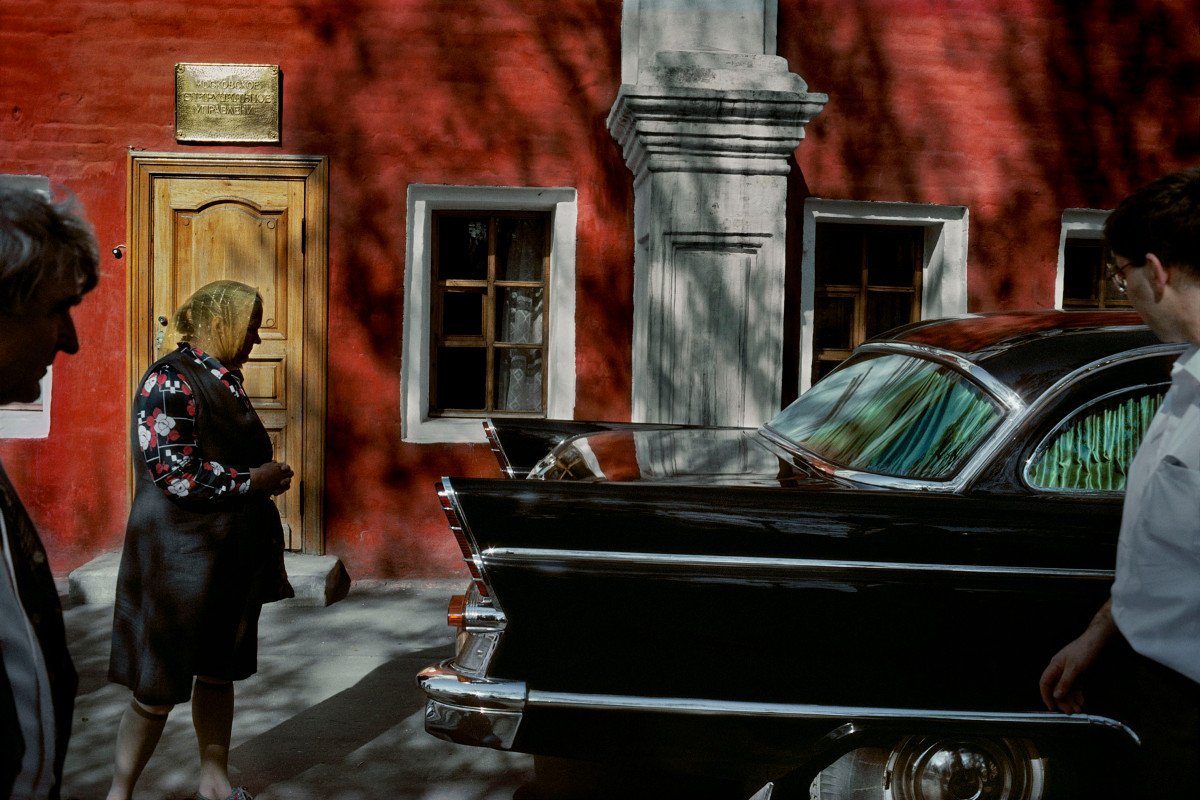 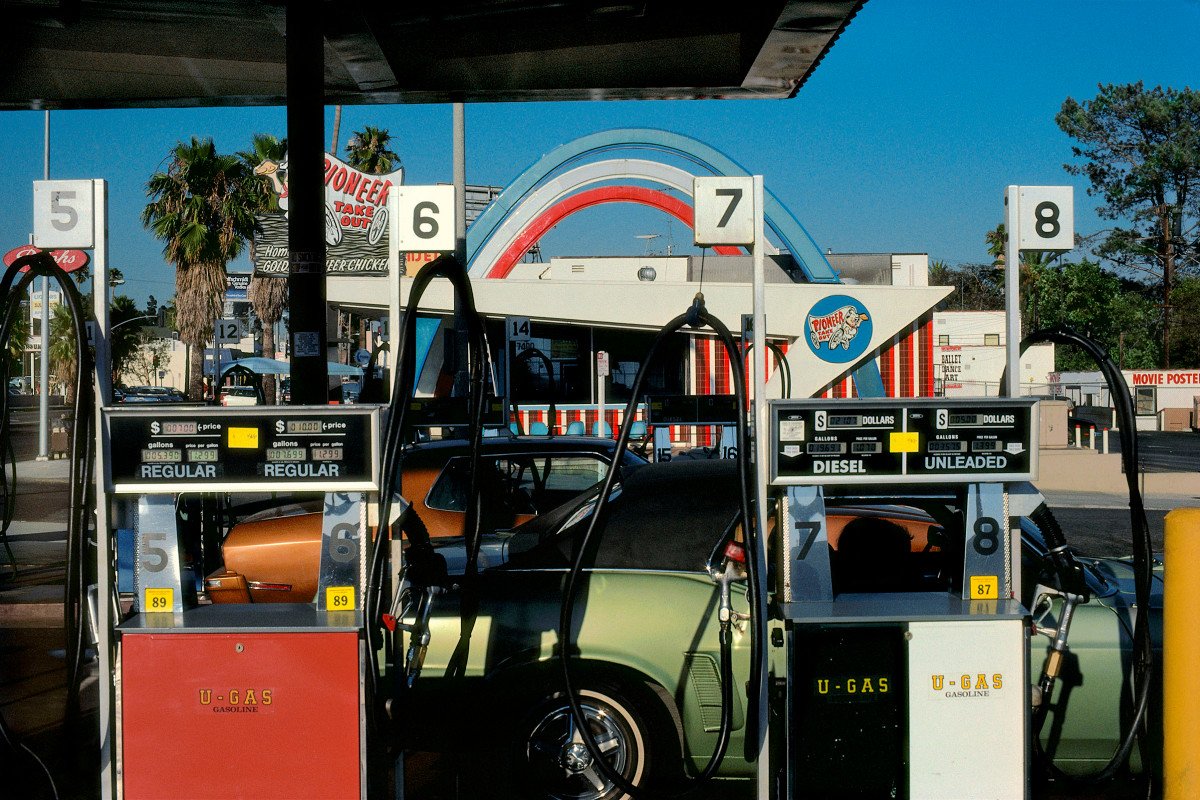 East and West is presented in a  two-volume set that divides 100 photographs between the books; each volume segregated by place, capturing life on both sides of the iron curtain. The editions also include an introductory essay by critic David Campany and each volume is housed in a slipcase emblazoned with a photo from its respective country.

“Beyond the visual attraction, there is an unmistakable feeling of melancholy here, as there is in much of Gruyaert’s photography. And a sense of disappointment too. There is some kind of elegy, to a promise lost or squandered for the day’s distractions.” – David Campany, from the foreword of East and West. 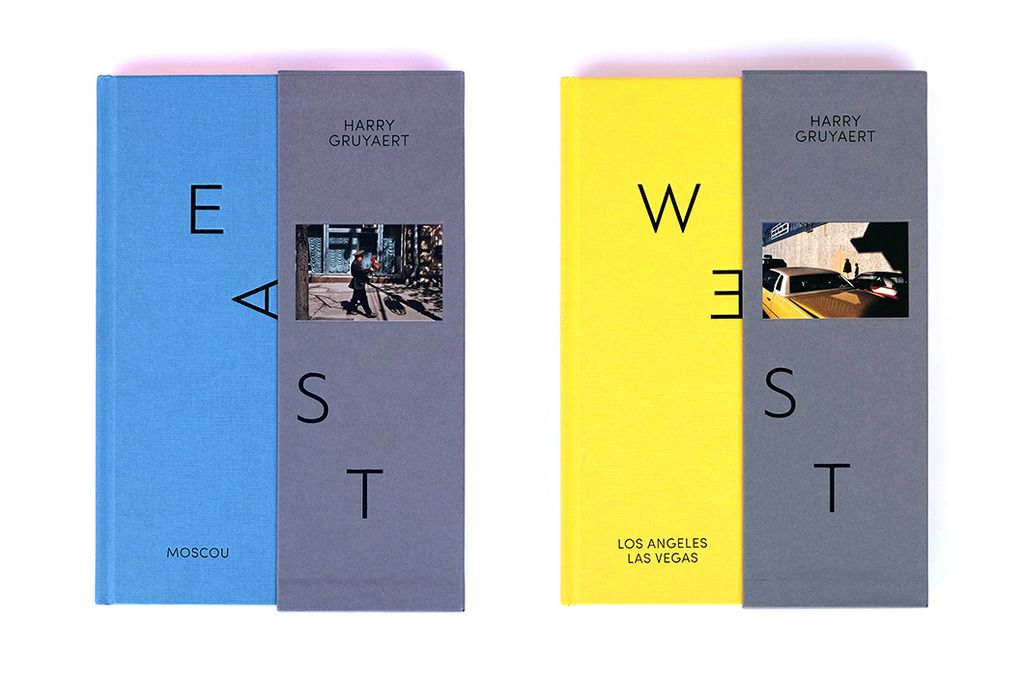 Regardless of its divided subjects, Gruyaert’s sensual intuition conjures a mass of information as well as emotion where every ephemeral moment has a cinematic quality, with something radiant extracted from even the most ordinary of objects. These photos are merely evidence that few photographers speak the language of color quite as well as Harry Gruyaert.

East/West is published by Thames & Hudson.