Throughout history, great photographers have sought to capture the essence of the human condition, exploring the questions inherent within us all. It is perhaps natural therefore, that death is a subject so often examined.

Photojournalism, in particular, is intrinsically linked with the subject, as it has, since its inception, been firmly grounded in war, with Roger Fenton’s, Valley of the Shadow of Death, (one of over three hundred he captured during the Crimean War) the first iconic depiction of this kind. Like all of his images, human death is not portrayed, but the hundreds of cannonballs which carpet the road, emblematize the bloodshed which took place there. 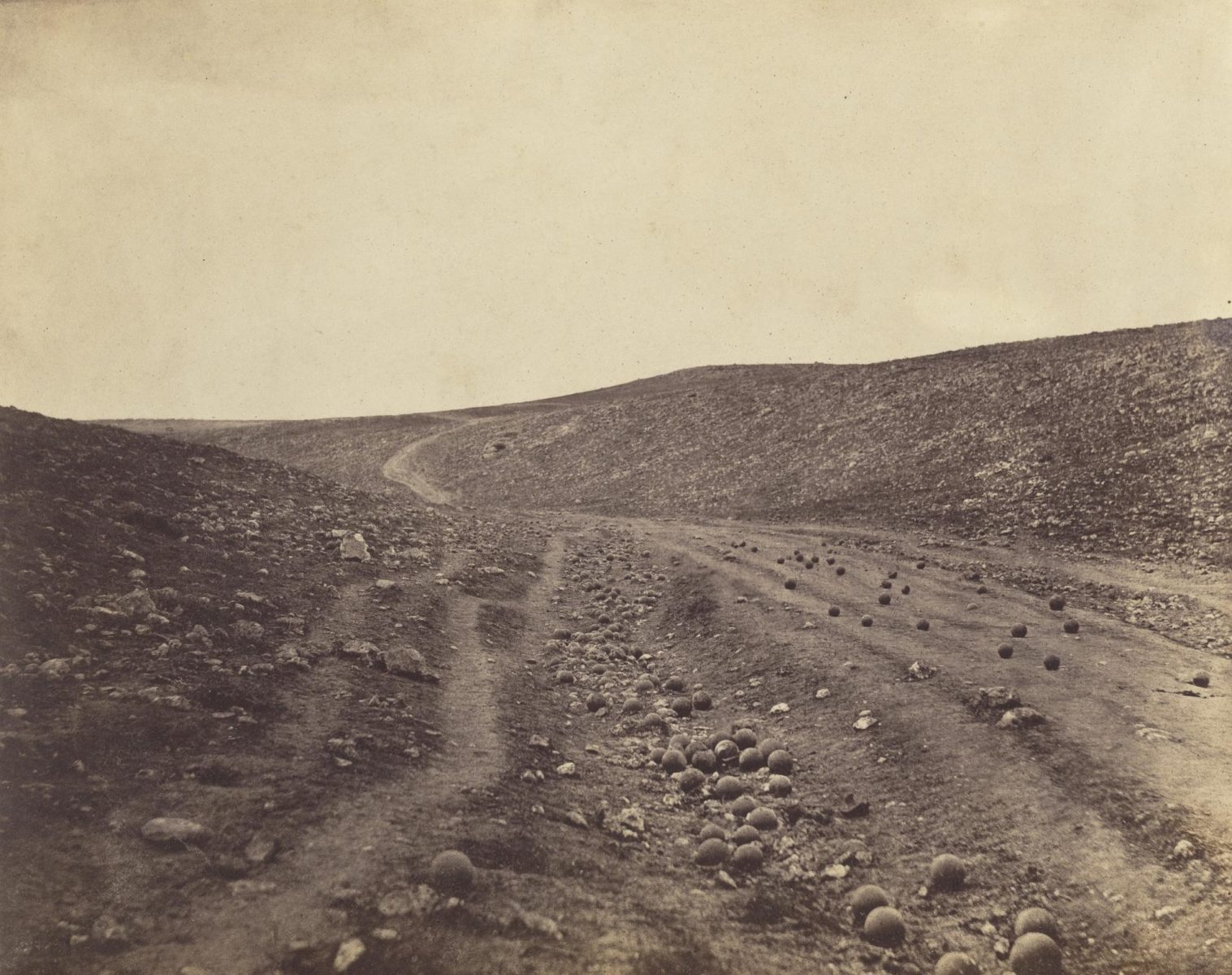 Robert Capa, one of the founders of the prestigious Magnum agency, is undoubtedly one of the greatest photographers of all time, renowned for his compelling images of war. His most iconic depicts the precise moment a Republican soldier is fatally struck by an enemy bullet during the Spanish civil war, an image that displays Capa’s virtuosity, and synchronously embodies both the intense drama and the desperate tragedy of war.

Remarkably, Capa claimed he captured it unsighted, lifting the camera above his head as he lay in a republican trench during the battle of Cerro Muriano, though there has been, since the 1970s, some debate as to its authenticity, with some critics claiming it was staged.

Despite this, The Falling Soldier (as it has become known), undoubtedly remains one of the most exceptional and influential war photographs ever produced, encapsulating the ‘close-up’ style, for which Capa (who famously once said “If your pictures aren’t good enough, then you aren’t close enough”) became synonymous, and setting the foundations for photojournalism thereafter.

Tragically, this dedication to his craft, regardless of his perilous surroundings, ultimately led to his demise; in 1954 he stepped on a landmine whilst documenting the French war in Indochina. 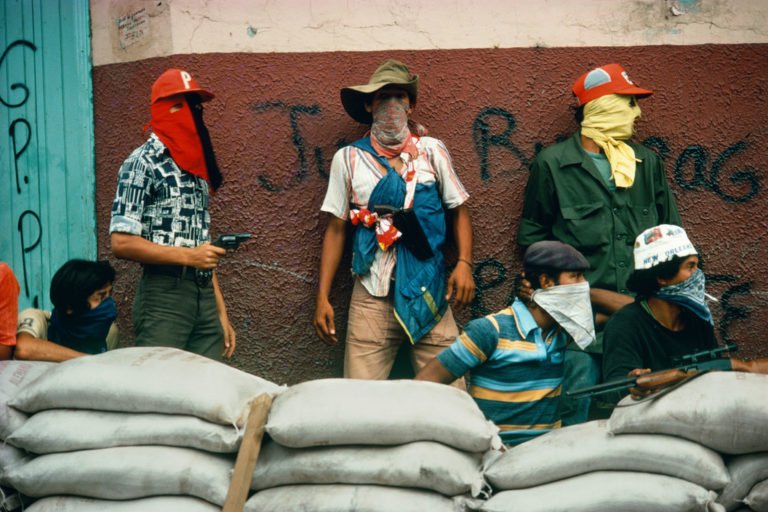 George Strock, like Capa, was tenacious in his dedication to capturing the brutal realities of war, often putting himself in harm’s way in the process. His disquieting portrayal of three American soldiers, their dead bodies half-buried in the sand of Papua New Guinea’s Buna Beach, is undoubtedly one of the most important war photographs ever taken, though one which very nearly never made into the public domain. 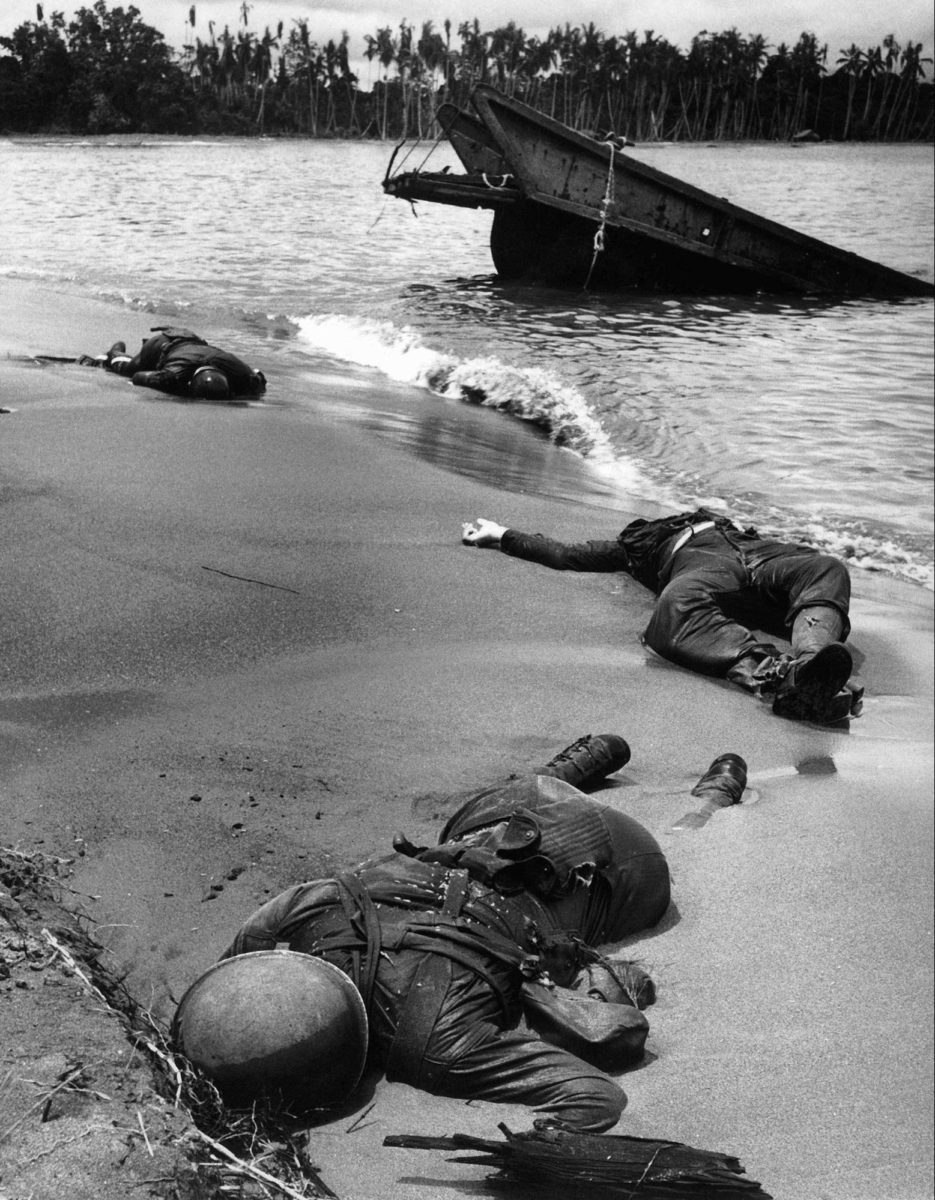 Life magazine, for whom Strock was working at the time, was initially blocked from publishing the image by the US government’s military censors, who had, up until that point, guarded all images of dead American GI’s from public view. However, the magazines editors, (adamant that the image should be viewed by the American public, who were in their opinion, largely ignorant of the brutal realities of the war in the Pacific), mounted a campaign to overturn the ban, one which, after nine months, and largely due to the intervention of Roosevelt himself, was a success.

In September of 1943, the image was published, along with an editorial which concluded with the following: “So here it is. This is the reality that lies behind the names that come to rest at last on monuments in the leafy squares of busy American towns.”

Death and the horrors of war have rarely been as palpable as in the images documenting the Vietnam war, many of which altered the course of the conflict in unprecedented fashion.

Phillip Jones Griffiths series Vietnam Inc., a sobering collection of monochromatic images documenting the human cost of the conflict, includes many such examples. Likewise, Horst Faas’ portrayal of a farmer, holding the small body of his dead child in his arms, a heartbreaking image that seems to epitomize the futility of the conflict. 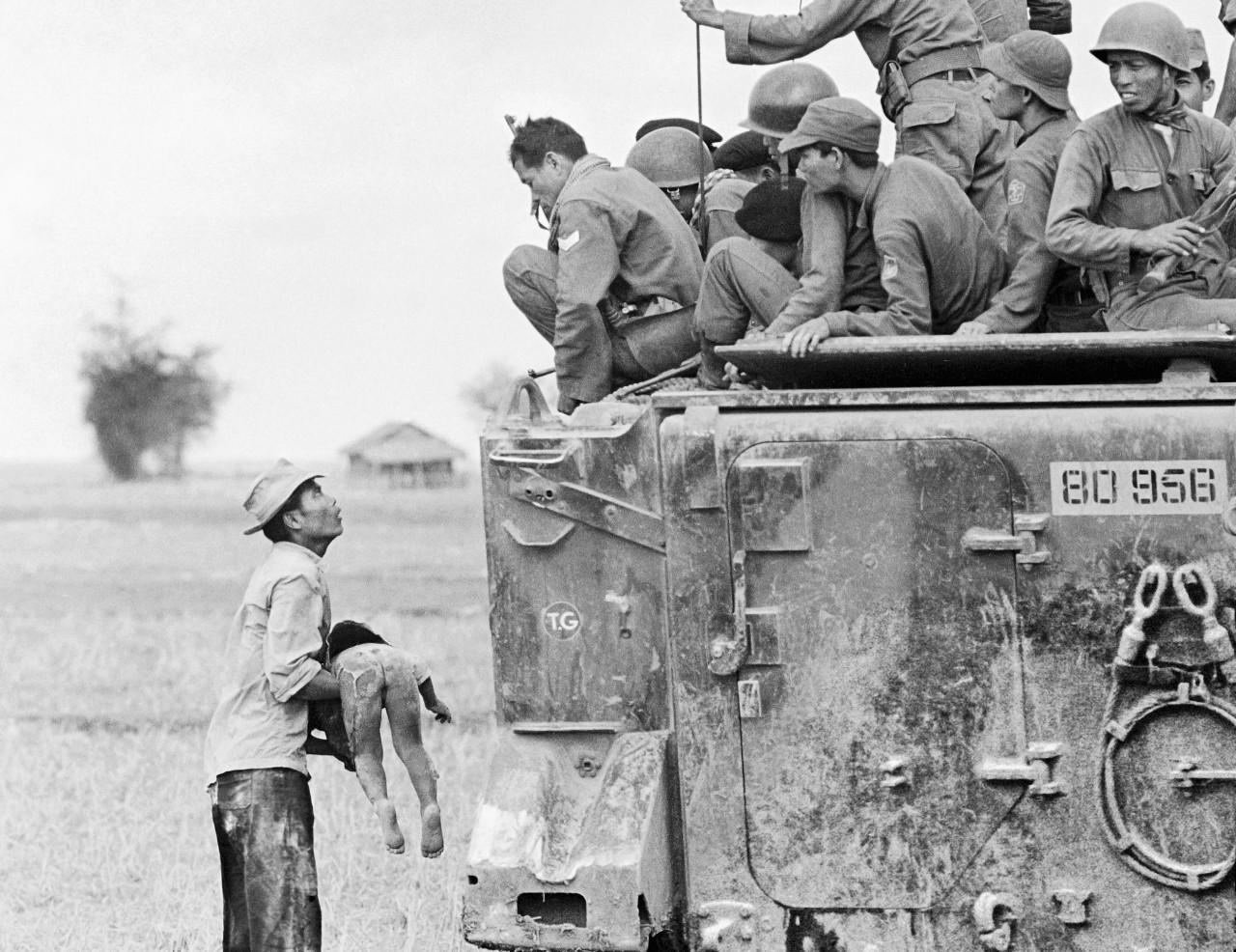 Though perhaps the image which best embodies the horror of the war, and is undoubtedly one of the most infamous, is Eddie Adams’ depiction of the execution of a Viet Cong soldier by the head of the South Vietnamese police, Gen. Nguyen Ngoc Loan.

Thoroughly distressing, Loan’s calm expression belies the brutality of his action, and contrasts with that of his victim, his face contorted with agony as the bullet enters his skull. It adorned the pages of newspapers worldwide, causing widespread shock and fury and leading to questions surrounding the narrative which portrayed the South Vietnamese, (the US’ allies), as the good guys, and ultimately the legitimacy of the war as a whole.

It later won the Pulitzer Prize and was also included in Time magazine’s top 100 most influential photos of all time, but Adams later expressed regret on the inexorable ramifications it provoked, specifically the widespread vilification of the executioner Loan. Unbeknown to most, including, at the time, Adams himself, the victim had recently murdered the family of one of his deputies.

Writing in Time shortly before his death in 2004, Adam’s reflected on his most famous image “Two people died in that photograph: the recipient of the bullet and Gen. Nguyen Ngoc Loan. The general killed the Viet Cong; I killed the general with my camera. Still, photographs are the most powerful weapon in the world.”

Few images induce such emotion as that of Alan Kurdi, a 3-year-old Syrian refugee of Kurdish descent, whose small, lifeless body washed up on the beach in southern Turkey on the 2nd of September 2015. Within hours of its conception, the image, captured by local photojournalist Nilüfer Demir, was plastered across almost every news platform worldwide, generating an unprecedented social media storm, and bringing shame on European governments, many of whom had, up until that point done little to accommodate refugees.

One of the many thousands who met a similar fate whilst fleeing their war-ravaged homeland, Alan Kurdi’s image remains an enduring symbol, both of the conflict in Syria and the ongoing refugee crisis. 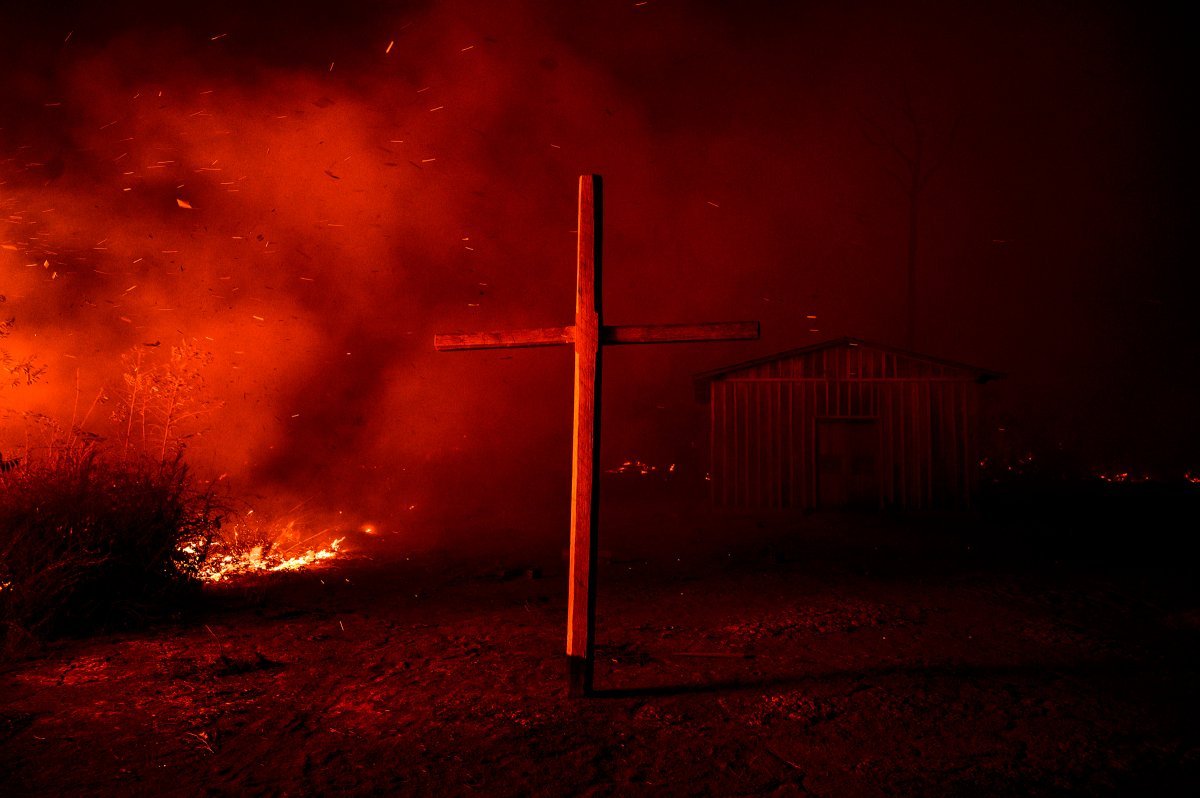 A church is enveloped in smoke from nearby flames in the region of Vila Nova Samuel, Brazil © Sebastián Liste / NOOR for TIME

Recent years have seen startling imagery representing the death of a different kind: that of our planet. Few regions exemplify this ecological destruction more vividly than the Amazon rainforest; the world’s largest, it encompasses over half of the earth’s remaining rainforest but is in rapid decline, accelerated dramatically by the recent fires which enveloped much of the region.

Spanish photographer Sebastián Liste documented much of the devastation, including, this striking image of a church overcome by flames. Imbued with apocalyptic symbolism: the hellish glow of the flames as they penetrating the gloom; the lone cross; it acts both as a somber testament of the fires, and as powerful metaphor of the destruction of our planet as a whole. 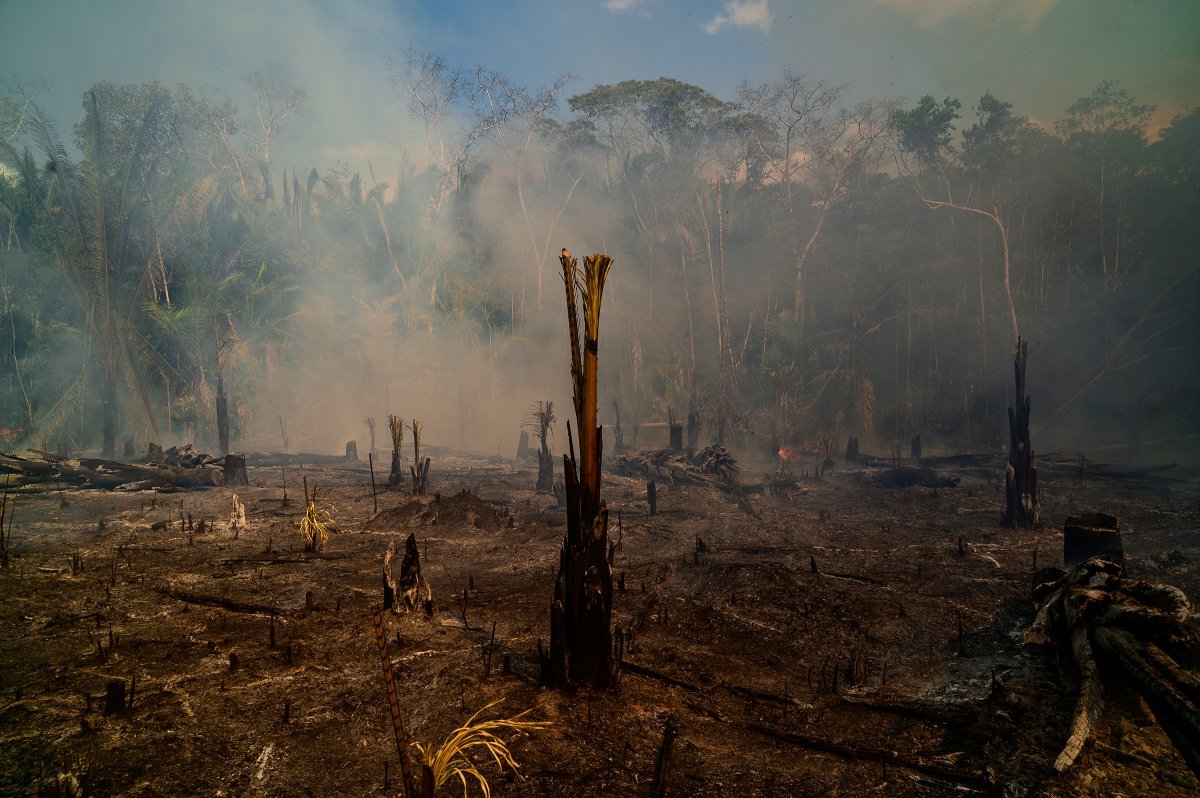 As we have witnessed, photography’s relationship with death is both long and storied; a relationship that has produced some of the most important images in history, and one which will undoubtedly continue. The looming inescapability of death makes it a subject that resonates deeply with us all.

“Life is a movie; death is a photograph.” — Susan Sontag