1968 – Remembered as the year the world went mad, fifty years have passed since some of the most pivotal events in modern history, but still the world seems to be left with scars that are yet to heal.

In 1968 high-profile assassinations dominated the news, whilst the war in Vietnam raged with no end in sight. Political protests erupted in various continents with riots wracking the streets of Paris, the USA, Mexico and various other countries. Out of this chaos emerged some of the most telling and important photography of the 20th century, images which have cemented this fateful year as a radical year of change.

The US support of the Vietnam war, which was a costly and divisive conflict that pitted the Communist ideologies of the North Vietnamese government against South Vietnam, resulted in the death of more than 3 million people. Opposition to the war in the United States fractured the nation and led to huge protests all over the world. The conflict was intensified by the ongoing Cold War between the US and the Soviet Union.

Photojournalists used the backdrop of the war to produce some staggering images, such as the execution of Viet Cong officer Van Lem, an image now famous for its incredible timing and brutality; capturing Lem just milliseconds before he died.

An anti-Vietnam war demonstration in London on March 18, 1968. Hundreds were arrested as they demonstrated outside the United States embassy © Corbis

Though the US government completely backed the Vietnam war, protesters all over the world took politics into their own hands and gathered to show their opposition to the conflict. Some staggering images of the huge crowds were captured in 1968 in the US and London. Riots often broke out following these protests and protesters were known to be brutalised by the police on numerous occasions. 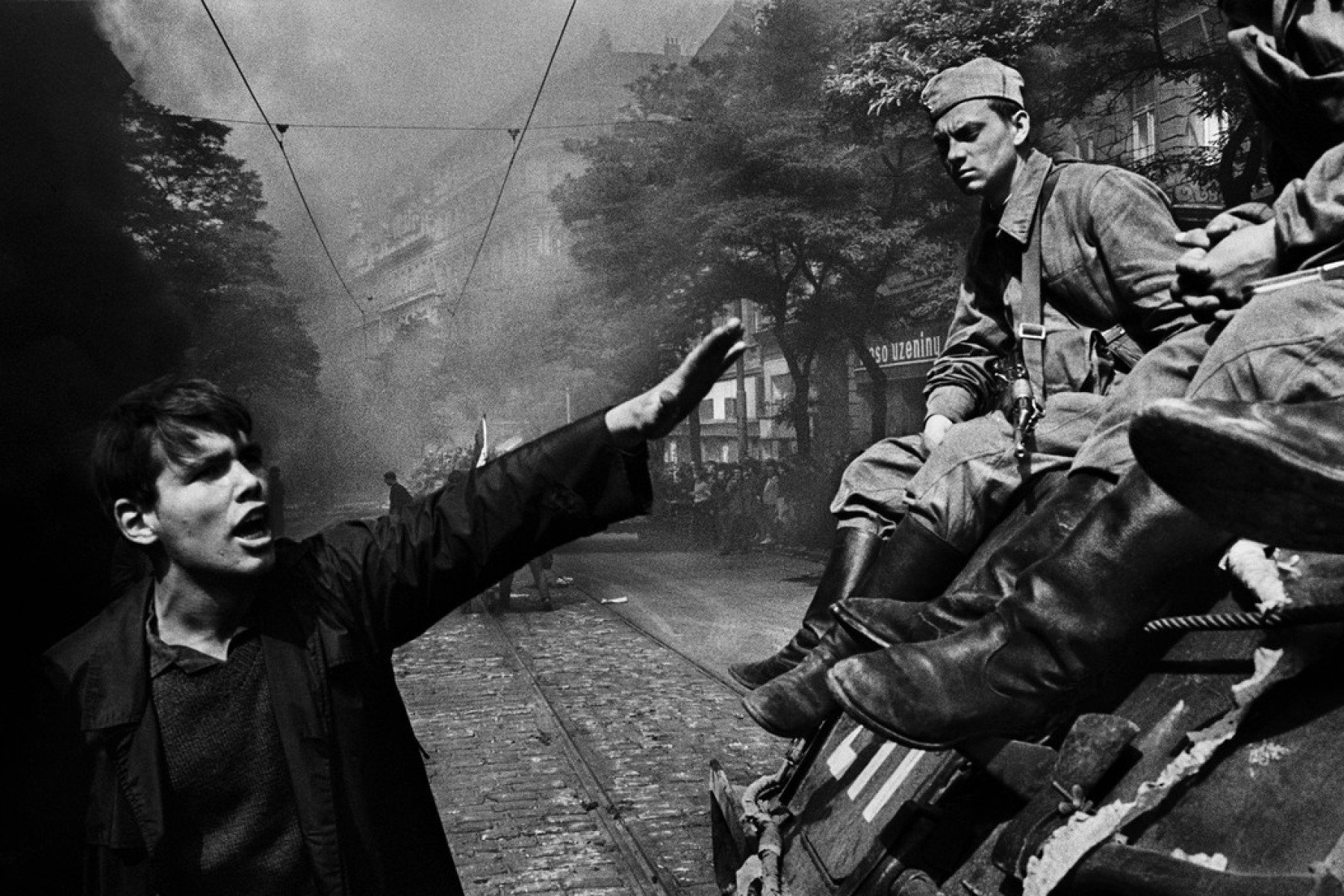 In other parts of the world, civilians were facing war on their doorstep. The Prague Spring in Czechoslovakia was born from disagreements between the Soviet and Czech leaders. With contrary views on how Czechoslovakia should be governed, the Soviet Union sent 2,000 tanks and soldiers to occupy the country in August.

Huge numbers of civilians gathered to protest the occupation in what became known as The Prague Spring. Magnum photographer Josef Koudelka was there documenting the event, and produced a hugely important photo series that has become one of the most seminal political series of our era.

The Civil Rights movement in America gained huge amounts of momentum in a short time as people of colour were extremely frustrated at the way society had treated them for so long. At this time, segregation still existed and it was not until the vocal personalities of civil rights activists such as Martin Luther King Jr. and Malcolm X, that these people felt like they had the strength to stand up to the nation. Though Martin Luther King Jr. is now remembered as a hero, in the sixties these right-wing fascists saw him as a threat.

However his death left a hole in the hearts of Americans hoping for a better future. To this day people of colour are fighting the same battle they were in the sixties.

Though 1968 was a year marked by tragedy, Apollo 8, the first manned mission to the moon, gave humanity hope for a brighter future. On Christmas Eve Commander Frank Borman held a live broadcast from lunar orbit, showing the world pictures of the earth they’d taken from their spacecraft.

Astronaut Jim Lovell  said of the photos: “The vast loneliness is awe-inspiring and it makes you realize just what you have back there on Earth.”

Large crowds gathered to bid farewell to Robert F. Kennedy, who was also assassinated in 1968, not long after Martin Luther King Jr. Taking up the mantle from his assassinated brother, John, Robert Kennedy gave hope to a distressed and mourning nation, but his untimely death destroyed all hopes of a new liberal government in the USA. Here, families gathered on the railroads as his coffin passed by, still feeling the proximity of this man’s large presence.

Huey P Newton, a co-founder of the Black Panther movement had also been arrested in 1968, accused of killing a police officer in Oakland, California. His arrest drew hundreds of his supporters to the street, marching under the Black Panther banner. Emblazoned with the words “Free Huey” they were a sight to behold, in their uniform military berets and leather jackets. Newton was convicted on manslaughter charges, but he was released from prison in 1970 after his conviction was overturned.

On the eve of the Mexico City Olympics, paramilitary forces who were hired to provide security for the event, participated in the massacre of 300 student protesters. The Tlatelolco massacre as it came to be known is now considered part of the Mexican Dirty War, when the government used its forces to suppress political opposition.

Claiming the governmental forces had been provoked by protestors wielding guns, they used their forces to silence the students. The killings fueled a series of guerrilla movements that disrupted Mexican society throughout the 1970s.

The events of May ’68 affected French society for decades afterwards- considered by historians and sociologists as a cultural and social turning point in the history of the country. The volatile period of civil unrest led by student protests and general strikes brought the entire economy of France to a halt.

Students were protesting capitalism, consumerism and American Imperialism in such a radical manner that the country feared civil war. Bruno Barbey was under assignment from Magnum Photos to record the demonstrations and took this historic image of young students throwing stones at the police.

One of the most memorable photographs of the civil rights movement is this image of black (and one white) protestors marching against a line of bayonet-wielding soldiers. Wearing placards reading “I AM A MAN”, their message couldn’t be clearer. Perfectly framed to show the divided nation, the single white protestor in the line of marchers emphasises the disparity between black and white citizens in American society, and across the world.

Although the revolutionary spirit of the late sixties harkened the dawn of a new era, viewing these images with the power of hindsight reminds us that times are still turbulent, and that history is in danger of repeating itself. However, these images are a good reference point for the times ahead, and demonstrate the power of the people.

Don't miss out when we
add news & editorials.

On which email do you want to receive them?

Subscribe to get access to drops ahead of the public,
and receive latest news about NFT photography.

Sign up to our newsletter – Don’t miss out
when we add news & editorials!

To support photographers, each month we are
offering 10 FREE ENTRIES to the competition.

Enter your email and join our newsletter to be considered.