“In photography there is a reality so subtle that it becomes more real than reality.”

If photography paints what we largely consider to be a true picture of our world, can a medium so grounded in ‘reality’ ever display the workings of the subconscious?

Since the dawn of time, artists have tried in myriad ways to interpret and explore what happens in their minds as they sleep, in a quest to comprehend the irrationality of their dreams. Photographers, naturally, are no exception. From the surrealists to fashion photographers, dreams are a constant source of fascination and inspiration and manifest themselves in the work of a multitude of artists who approach the subject as a scientific exercise, through the doctoring of imagery, or by focusing on the act of slumber itself. 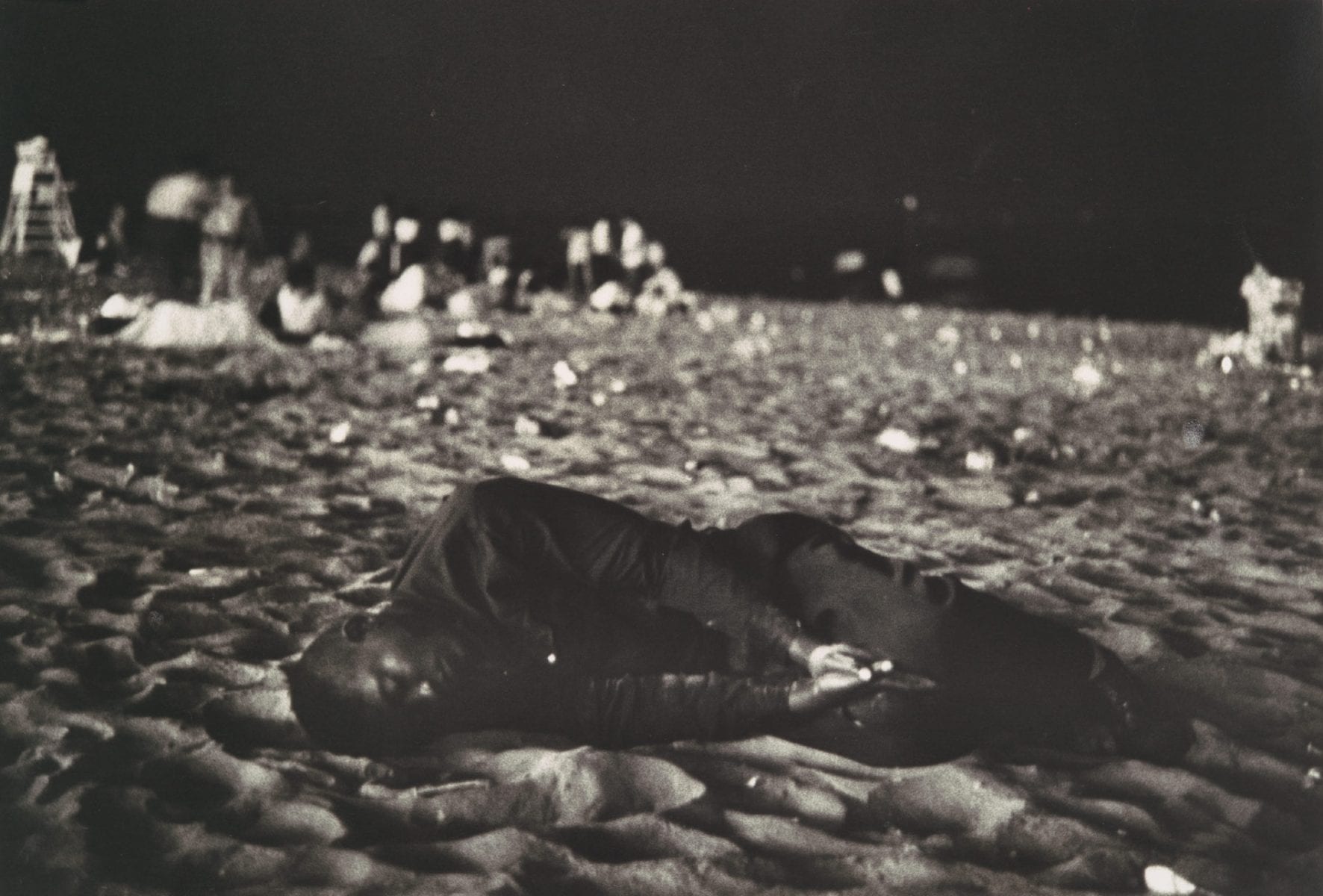 Since as early as 1904, photographers have been attempting to use simple techniques to visualise their thoughts. Today, Photoshop is used to distort reality, but a handful of pioneering turn-of-the-century scientists (and pseudoscientists) believed the camera lens was a portal to an unseen world. Inspired by the first X-rays, experimentalist Louis Darget developed a portable radiograph that he claimed could imprint images of thoughts and dreams onto photographic plates.

Comprising of a photographic plate attached to a headband, Darget maintained that “when the human soul produces a thought it sends vibrations through the brain, the phosphorus it contains starts radiating, and the rays are projected out”. Later exposed as a fraud by the French Academy of Sciences, he nonetheless continued interpreting the eerie, ghost-like images produced by his radiograph convinced that this was the key to understanding his dreams. 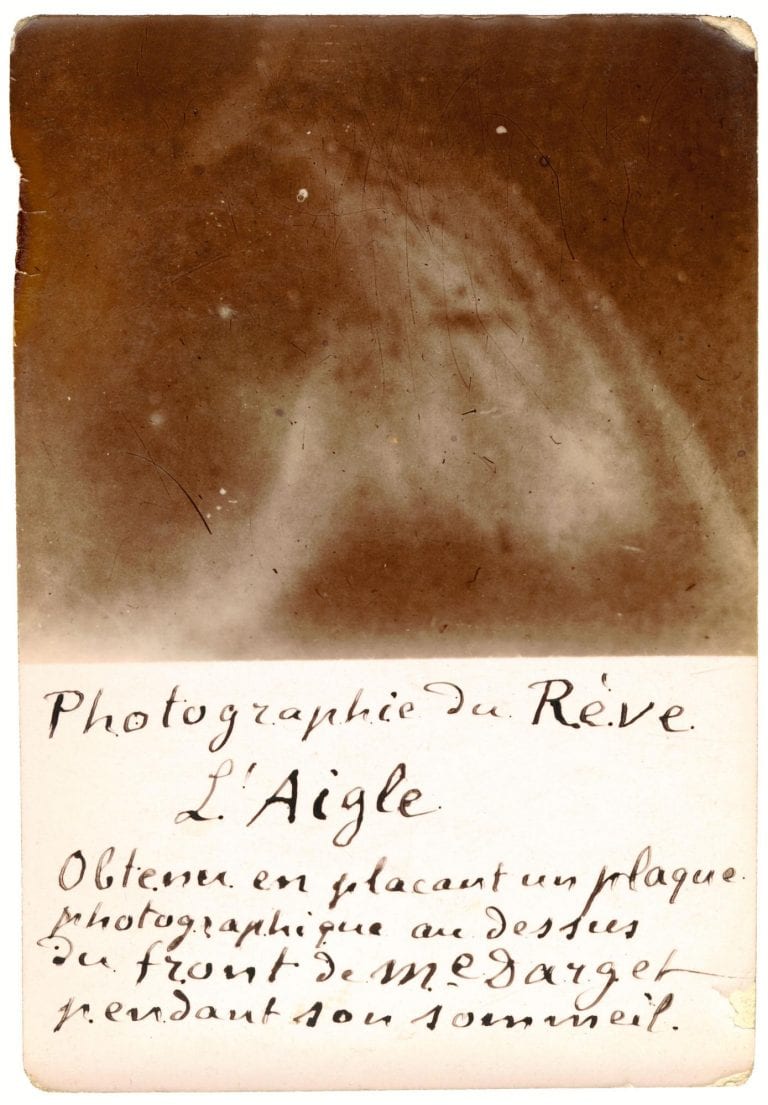 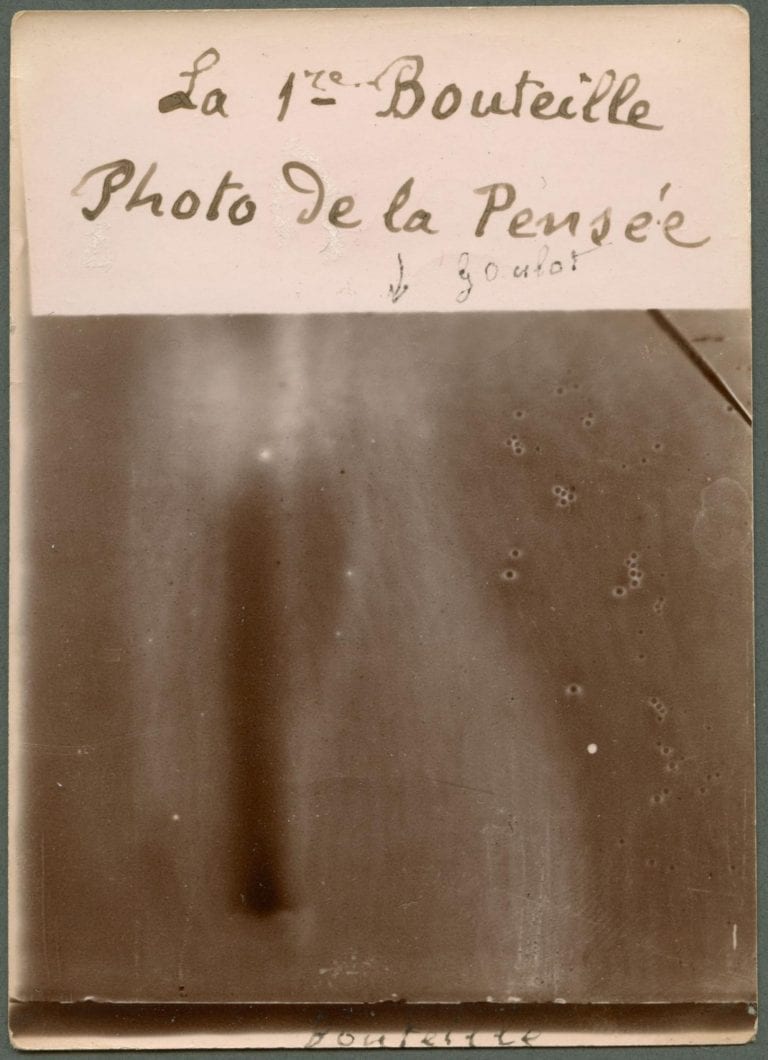 Taking a similar approach grounded in scientific method much later, artist Arthur Tress explored and documented the dreams of children. In the late 1960s, Tress began a project which combined audio-recordings of children recounting their dreams and nightmares with staged reenactments of those accounts, culminating in the publication of his book The Dream Collector in 1972.

Through his interviews, Tress realised that common themes punctuated the nightmares of these children, whose feelings of loneliness or fears of abandonment would manifest in scenarios such as falling, drowning, being trapped, chased by monsters, or being humiliated at school. In the image below, which could almost pass as a work of documentary, Tress depicts a young boy clinging to the roof of a home ravaged by a great flood. The desolate landscape evokes a sense of an imagined non-place characteristic of dreams. 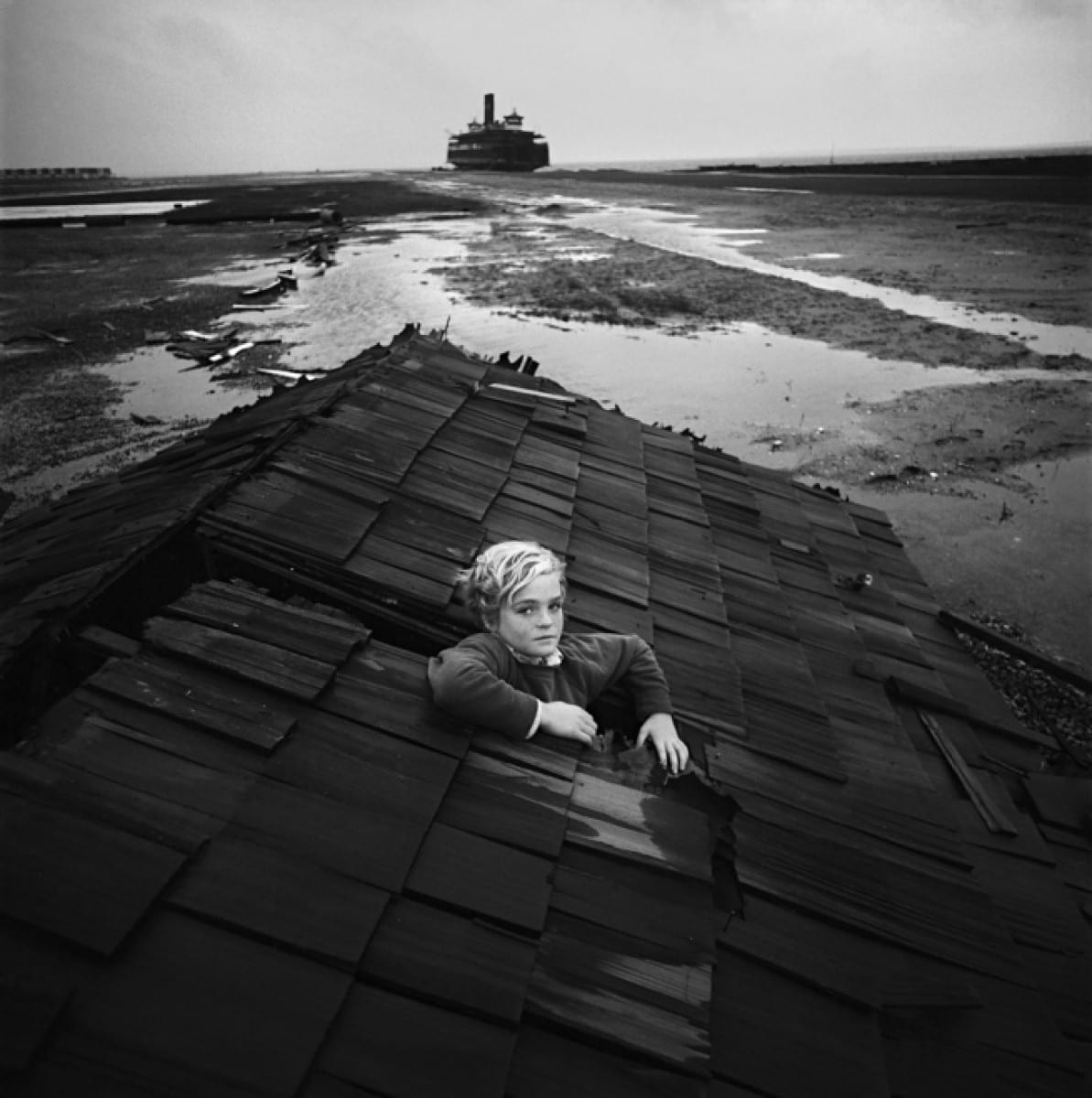 Dreams still inspire contemporary photographers to doctor images in order to create imagined scenarios. Whilst this is mostly seen in the work of fashion photographers, notably Viviane Sassen who claims her work is directly inspired by dreams, there are also documentary and fine art photographers who use imagined landscapes to illustrate a subjective experience.

Gregory Halpern for example, describes the nature of photography as duplicitous and questions the “ability/problem of being able to focus on and select such a narrow set of things, and then put them next to each other as if they represented some version of reality.” Halpern’s recent series, ZZYZX, is rooted in documentary but aims to exhibit photographs that give the viewer scope to build their own story. 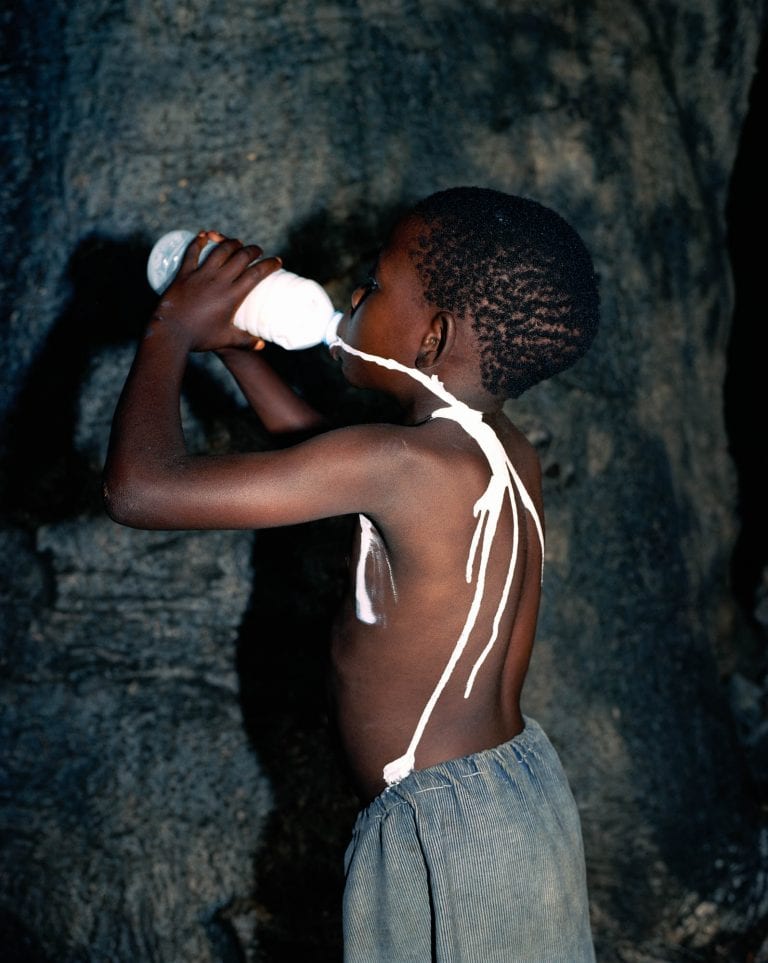 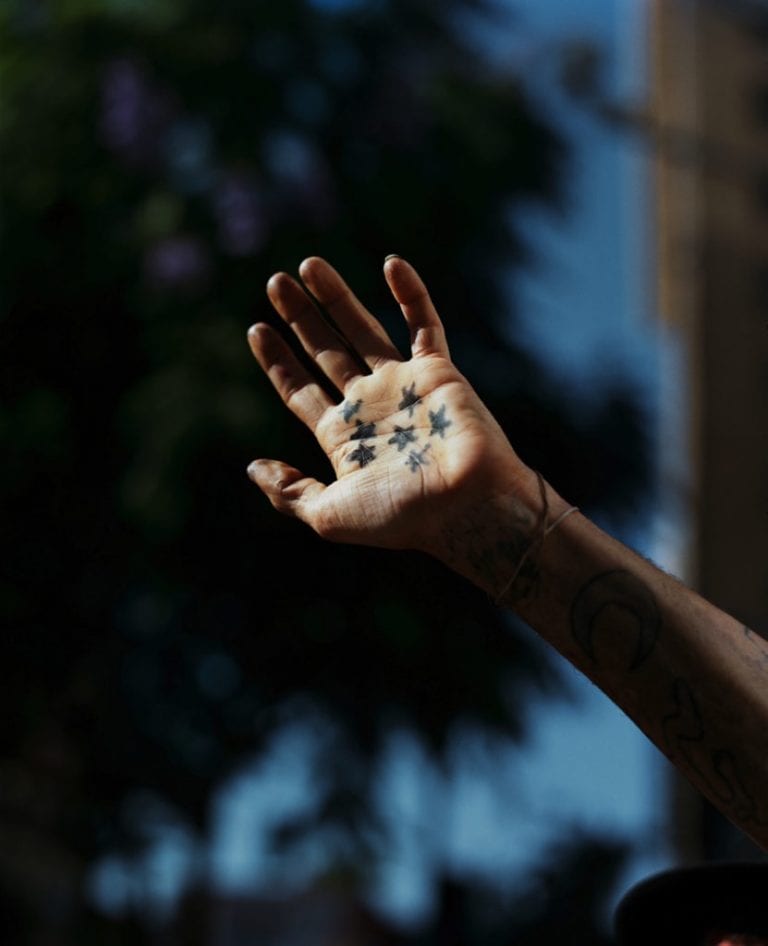 Other photographers have focused on the act of sleeping itself in an effort to understand the fabric of dreams. In an iconic shot by Brassaï, the photographer suggests explicitly that a homeless, hungry man lying on the street under a billboard advertisement is dreaming of an improbably large salad. 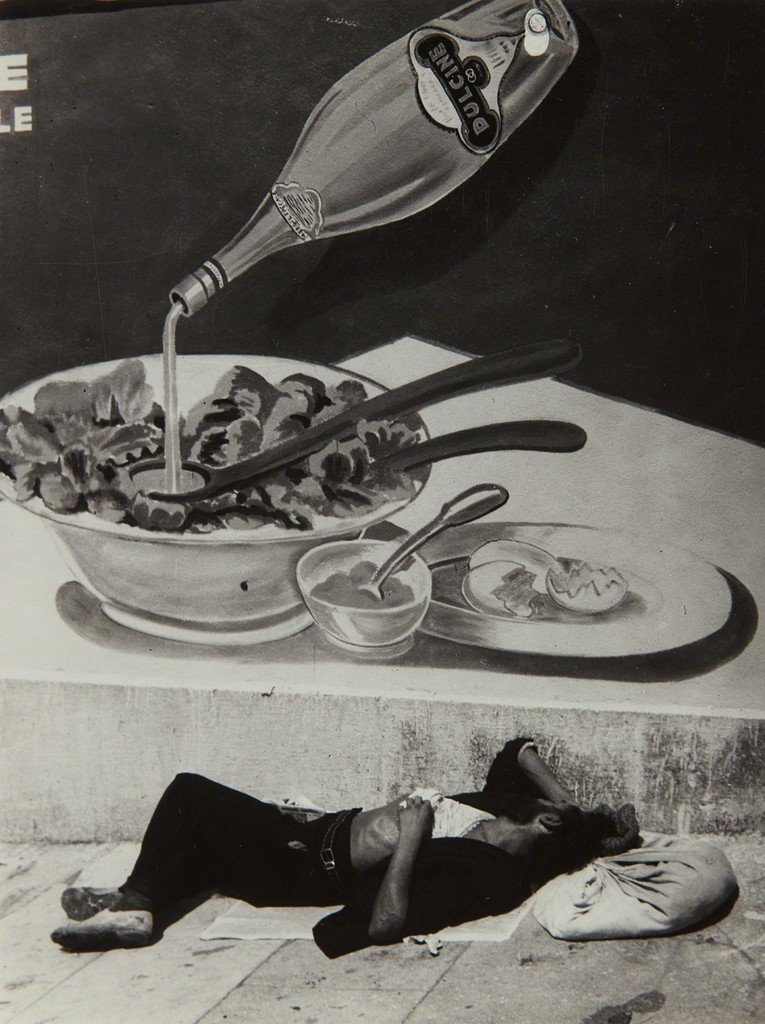 A vagrant asleep in Marseille © Brassai

“I don’t invent anything. I imagine everything… most of the time, I have drawn my images from the daily life around me. I think that it is by capturing reality in the humblest, most sincere, most everyday way I can, that I can penetrate to the extraordinary.” – Brassaï 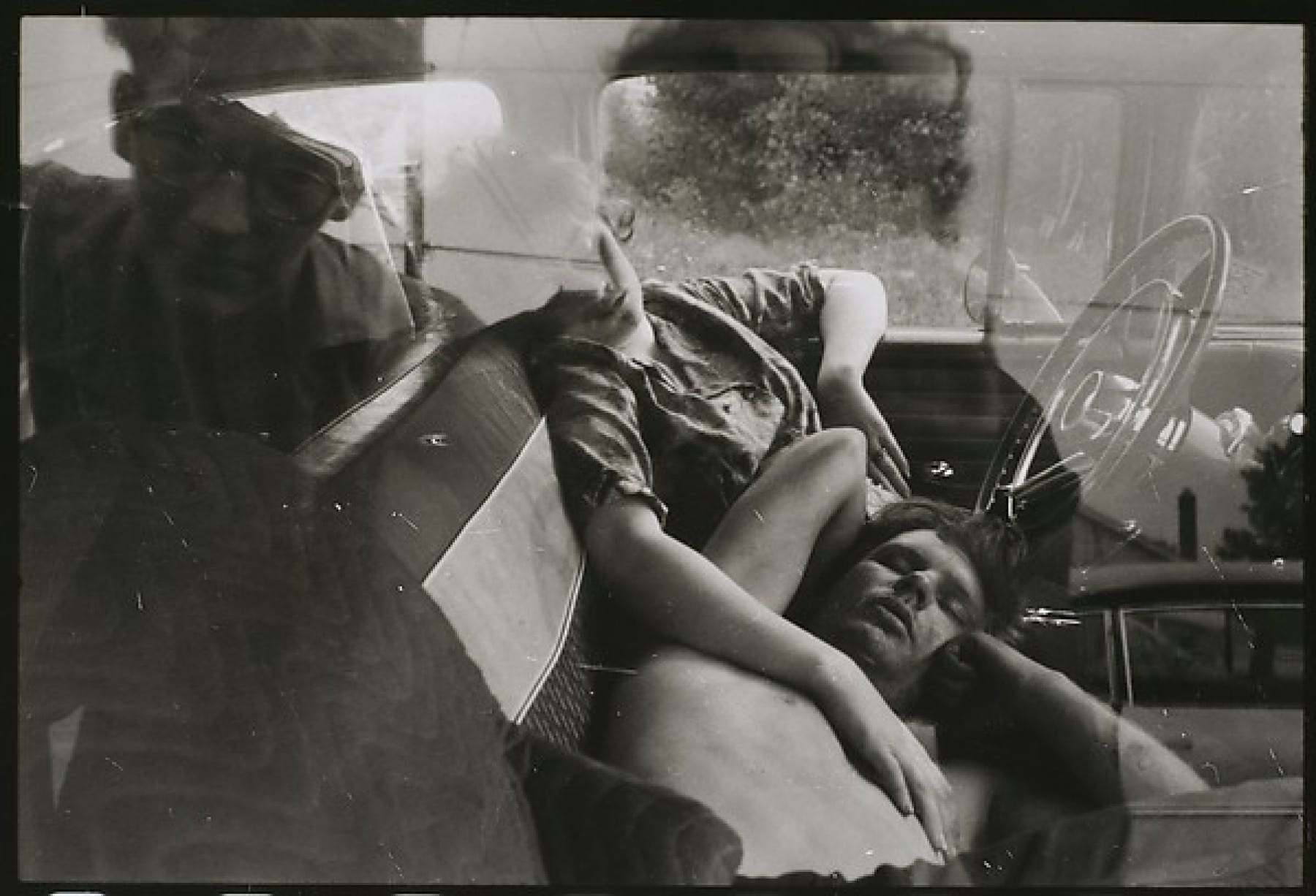 An image by Danny Lyon that captures a moment of pure tranquility between two lovers juxtaposes two layers to add extra meaning to a simple street photograph. With great subtlety, the car becomes a metaphor for their contained reality adjoining the outside world, as the sleeping couple is trapped in the confines of their slumber. The hazy reflections of the observers could be apparitions from their dreams.

Likewise, Robert C. Wiles’ memorable photo of Evelyn McHale, who committed suicide by jumping from the 86th floor of the Empire State Building on 1 May 1947, reveals the inner torment of a young woman but renders it beautiful. Despite plunging 320 meters, the body of the 23-year-old woman landed on a United Nations assembly Cadillac limousine parked on 34th Street in an intact, even serene, pose, as if she were merely sleeping. 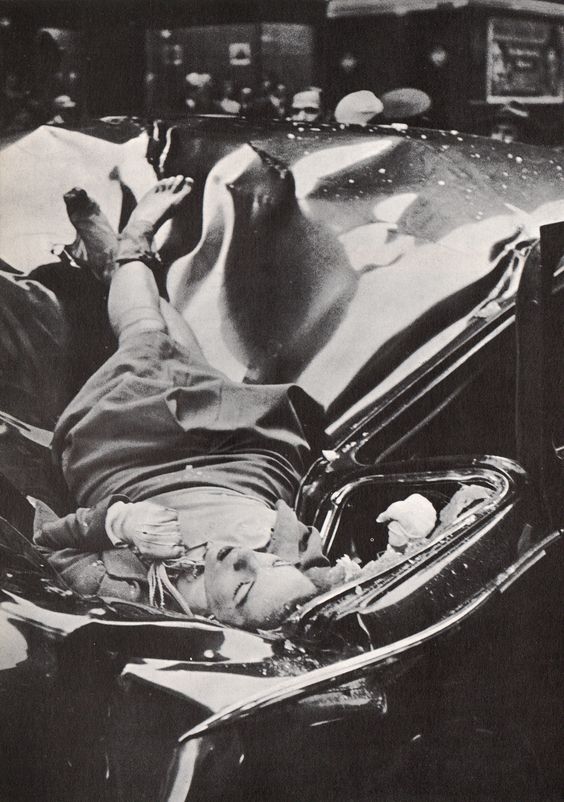 In a similar vein, the work of Francesca Woodman – a late 20th century American photographer known for her dramatically staged black and white self-portraits – offers a complex insight into a tormented mind. Despite committing suicide at the early age of 22, Woodman produced an unexpectedly large and diverse body of work.

Her photographs resonate deeply because of their claustrophobic atmospheres and blurred, anonymous faces, recalling the haziness of dreams that evaporate as soon as we wake. Woodman’s images seem to capture the torment she faced in her waking life, and by doctoring them or manipulating them in-camera, she created a vision of a world that was the stuff of nightmares. 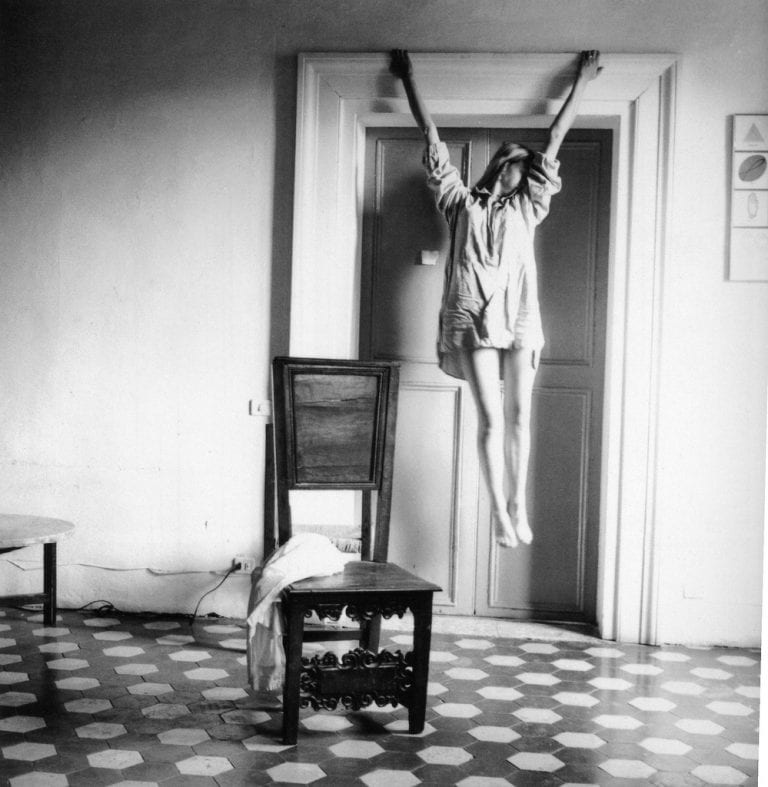 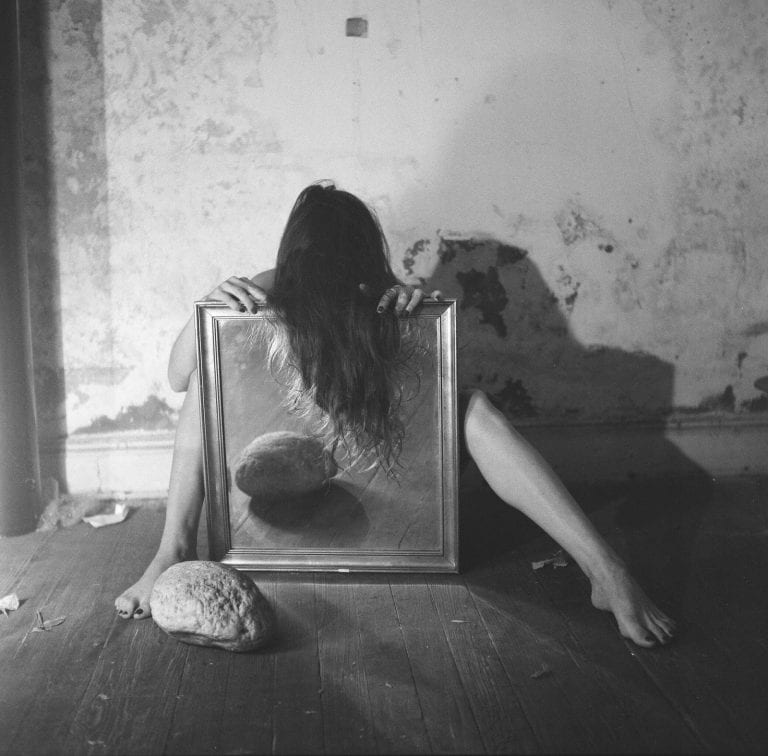 German-Argentine photographer Grete Stern also used post-production techniques and manipulation in her Suenos (Dreams) series to give her images a dreamlike quality. Her photomontages – produced on a weekly basis for the women’s magazine Idilio from 1948–51 were meant to accompany the column ‘Psychotherapy will help you’ which invited readers to share their dreams, which were then analyzed by a psychologist.

Stern’s richly imaginative photomontages truly grasped the unrivalled feelings at work in the dreams of her correspondents. In one memorable shot, a masculine hand leans in to “turn on” a lamp whose base is a tiny woman- an electrically-charged manifestation of female objectification. Stern’s photomontages follow in the tradition of the surrealists whose art sought to release the creative potential of the subconscious. 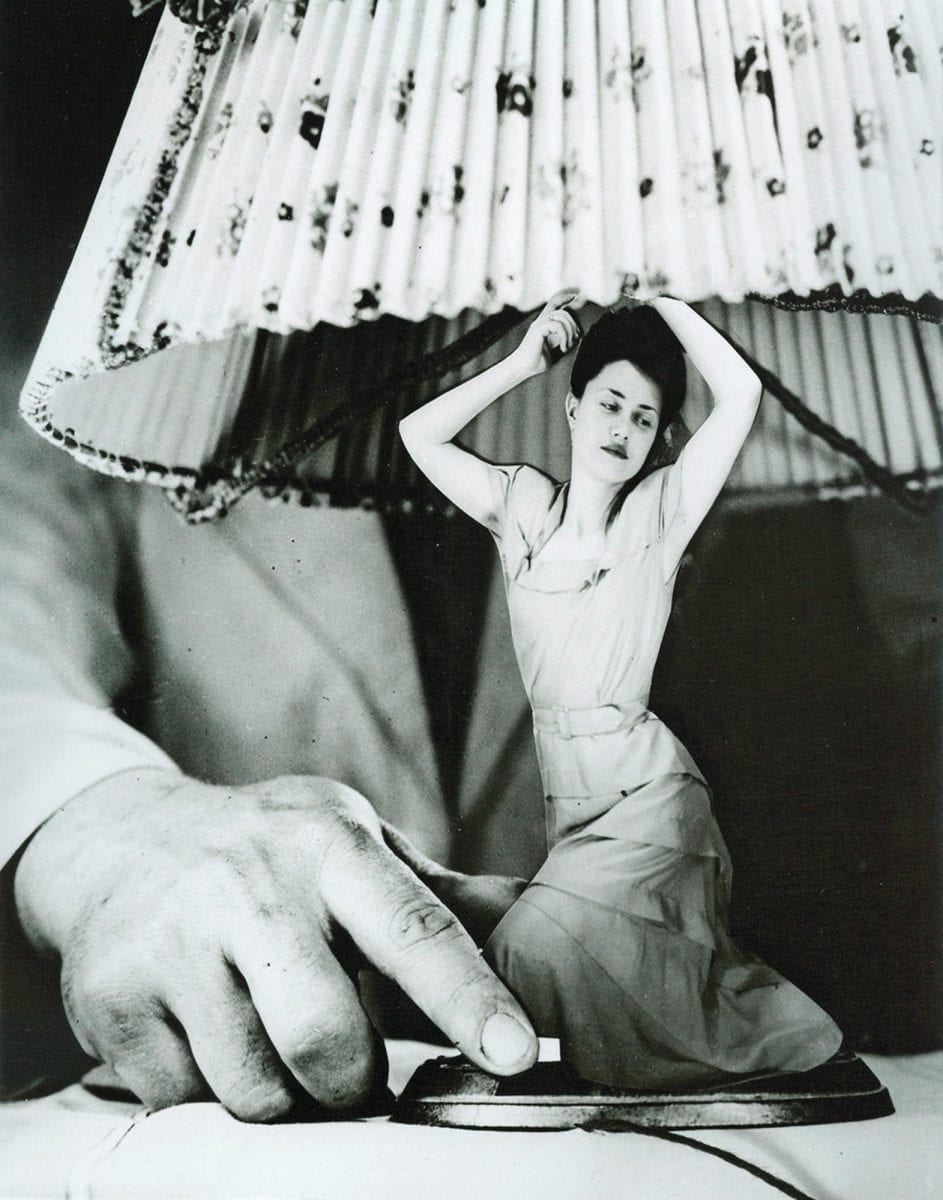 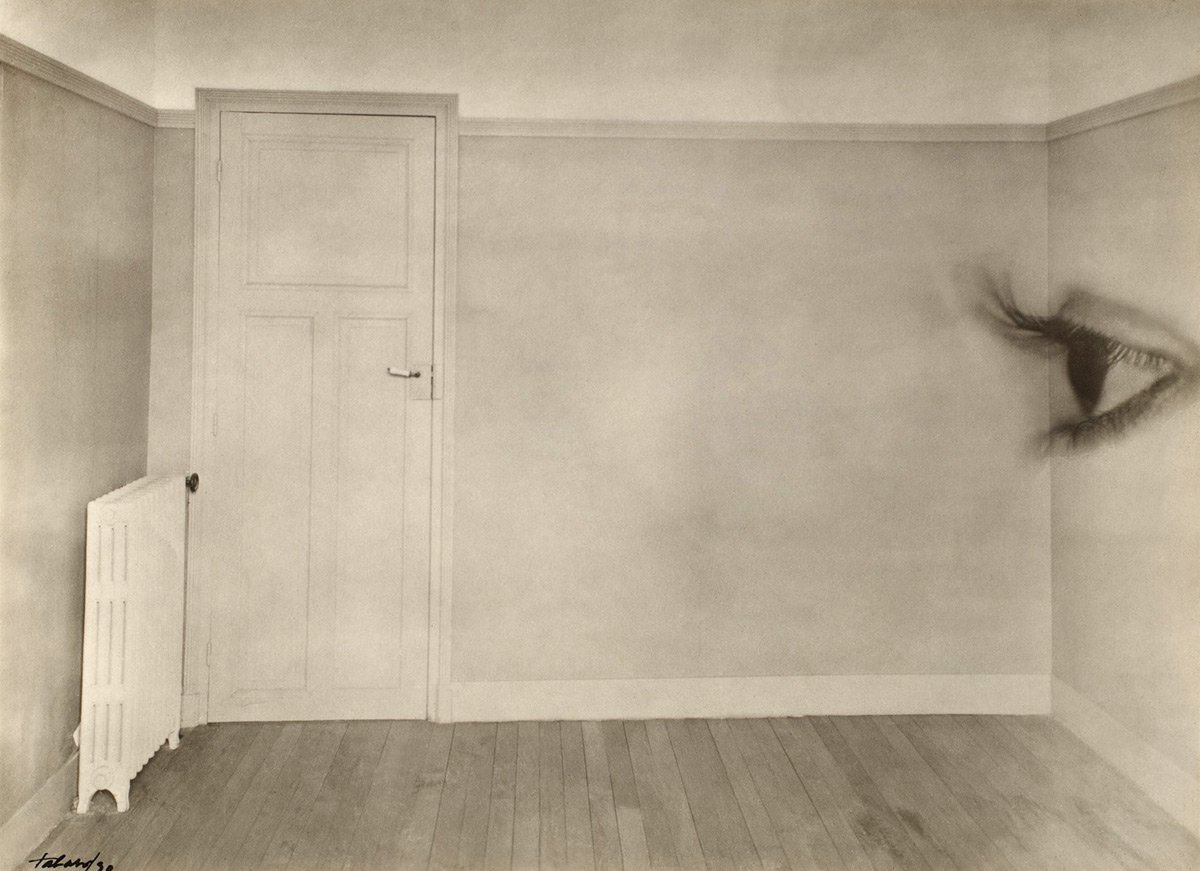 Photographers have used multiple methods to explore the hidden world of sleep and dreams, but if these indicate something in common it is that photography has always offered an unrivalled portal into our subconscious.

Photography can help us digest the often frightening, nonsensical scenarios which play out in our sleep. The surrealists began a long tradition which continues in hybrid forms today. Though scientific advancements have progressed tremendously in the 20th and 21st century, science can still not offer us the answers we look for- for this we have art as a respite.