“I am forever chasing light. Light turns the ordinary into the magical.”

Traveling 90,000 kilometers across his homeland with his partner Narelle Autio, Australian photographer Trent Parke documented his experiences and produced a body of work which he came to call Minutes to Midnight.

Workers on George street in the city centre. Sydney, Australia. 2002.

“Witnesses reported watching a ball of light move across the sky for up to five minutes at about 5.50 am Saturday. – “It was a perfect spiral of light”, one Redcliffe witness told The Sunday Mail. – “I realized soon it was not the moon but that it was shooting like a comet from the southern sky and off into the northwest.” Another Brisbane resident said: “There was absolutely no sound in a perfectly clear, darkened sky before dawn.”

The weather bureau said there were no weather conditions that would explain the light. A defense spokeswoman also said she had no explanation. – The Sunday Mail, June 5th, 2010, Queensland, Australia (excerpt from Minutes to Midnight)

Australia has long seemed somewhat insecure about its place in the world. A proud country consisting of conflicting identities and cultures; contrasting landscapes and lifestyles; and a country, like so many others, in a state of rapid change.

Parke had long suffered from an existential sense of unease, but it was a newspaper article, claiming more than half of Australians felt the country had lost its innocence, that resonated with him, and ultimately inspired the epic journey. 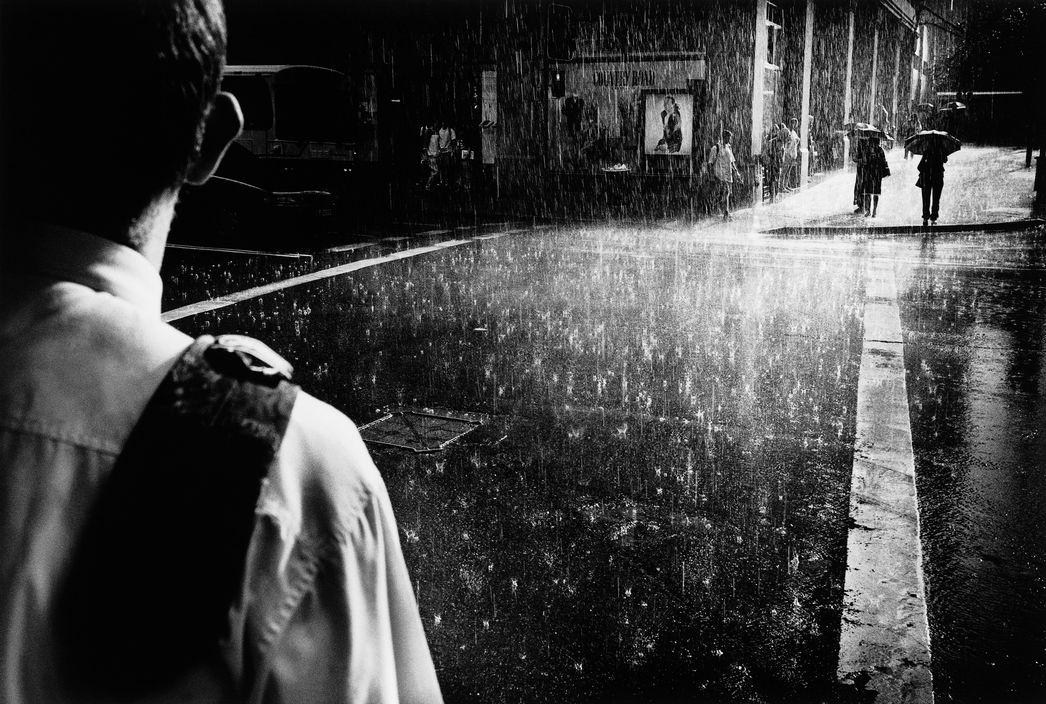 A man stands huddled under awnings with his tie thrown over his shoulder after running through a thunderstorm. Sydney, Australia. 1998

For many, Australia conjures up images of a bright, and serene paradise, but Parke presents an altogether different view. Through his monochrome imagery, he explores the key issues affecting the country: racism; inequality; natural-disasters: presenting Australia as a microcosm of the world as a whole.

He combines traditional documentary techniques with striking symbolism and avoids fixating on a single, discernible narrative, encouraging the viewer to construct their own meaning from the images. 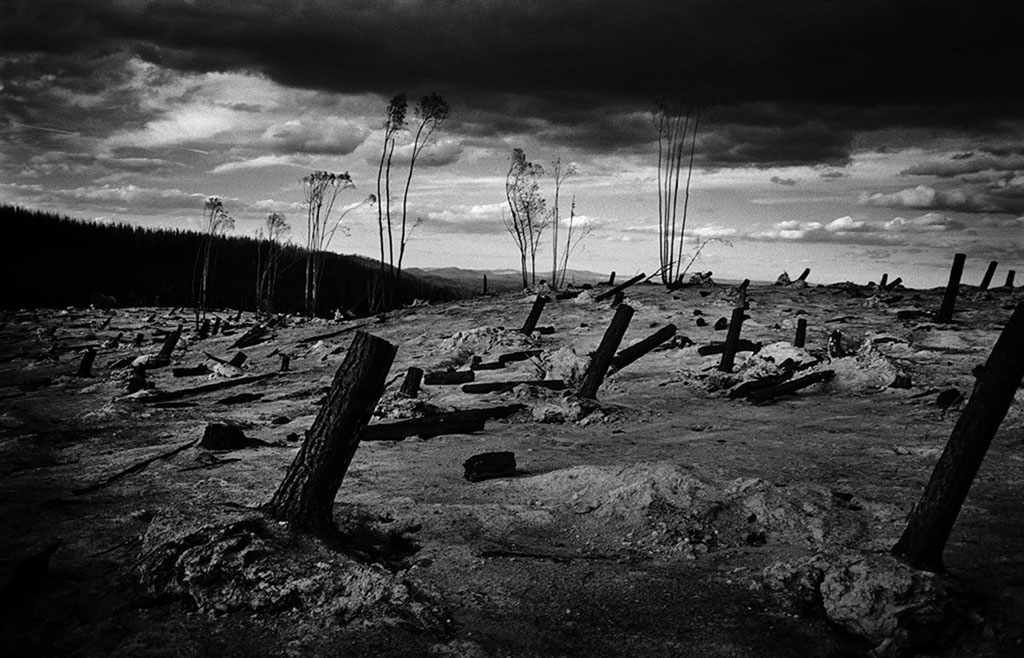 Remains of a forest on the western suburbs outskirts of Canberra after a firestorm, 2004 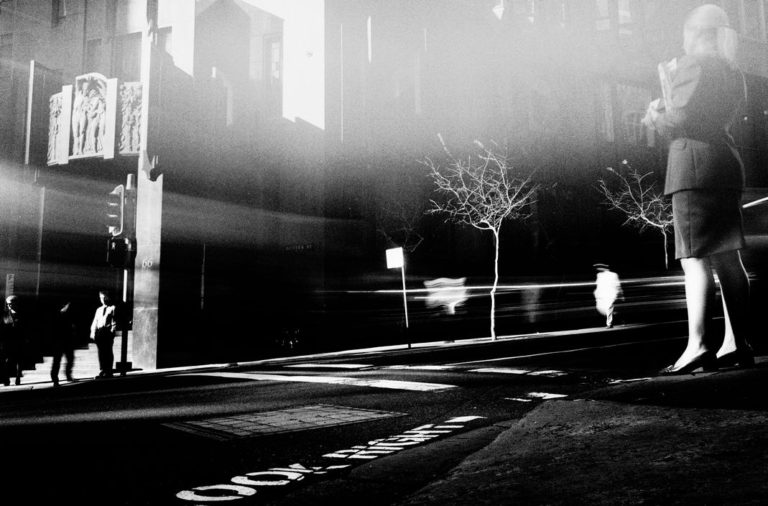 At times, Parke uses juxtaposition to capture the contradictions of Australian society: suited traders stand below looming, modern structures in Sydney’s financial district: a stark contrast to the remote Aboriginal town of Wiluna, whose residents are slumped on the litter-strewn ground outside the local pub, on which a sign reads ‘Welcome to Paradise’.

Meticulous in his approach, Parke frequently shoots the same subject hundreds of times in order to capture the perfect image. His use of light is exquisite, with many of the images taken at night, the darkness boasting an almost overwhelming quality which contrasts dramatically with the hard glaring flash he uses to light the scene. 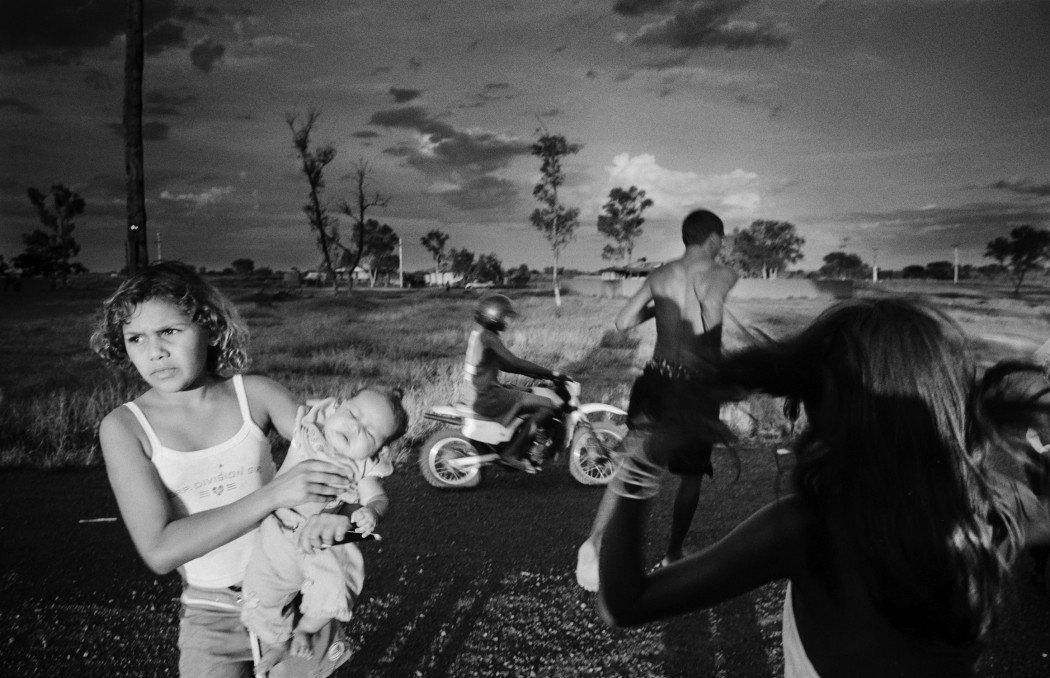 A child being carried. Wiluna, the Outback in Western Australia, Australia. 2004

Even images captured in daylight are pervaded with gloom, permeated by clouds or shadows, or possessing a drab, grainy quality. He flirts with abstraction: using long or multiple exposures, unusual angles, or at times shooting slightly off-focus to further confound the viewer.

The surreal imagery seems to exist in a reality different from our own, imbued with a sense of trepidation which is accentuated by the often macabre connotations of the subject matter: a corpse of a mutilated animal besides a glowing fire; the remains of a forest: its angular tree-stumps evoking headstones in a graveyard; human subjects depicted as ghost-like figures.

Portrait of a young girl in Berwick Suburbs. Victoria, Australia. 2004

Parke juxtaposes this morbidity with a number of images of young children, including, near the conclusion, a striking image depicting his son, just moments after his birth

Simultaneously beautiful and troubling: Minutes to Midnight is a truly unique accomplishment: a stunning visual portrait of Australia that captures perfectly the quintessence of the country.

Cooling off at the end of the day, Rooster, one of the feral pig hunters, takes the plunge into a windmill-driven water tank in the desolate outback landscape. The Outback in

“This body of work is about the emotion of the time that we live in—it is not a physical sense but an emotional sense and the subconscious, and the thought of what might happen. It is a document but a fiction as well. So Minutes to Midnight is an apocalyptic book, but they’re real documents as real events—real moments in time that have happened.” – Trent Parke 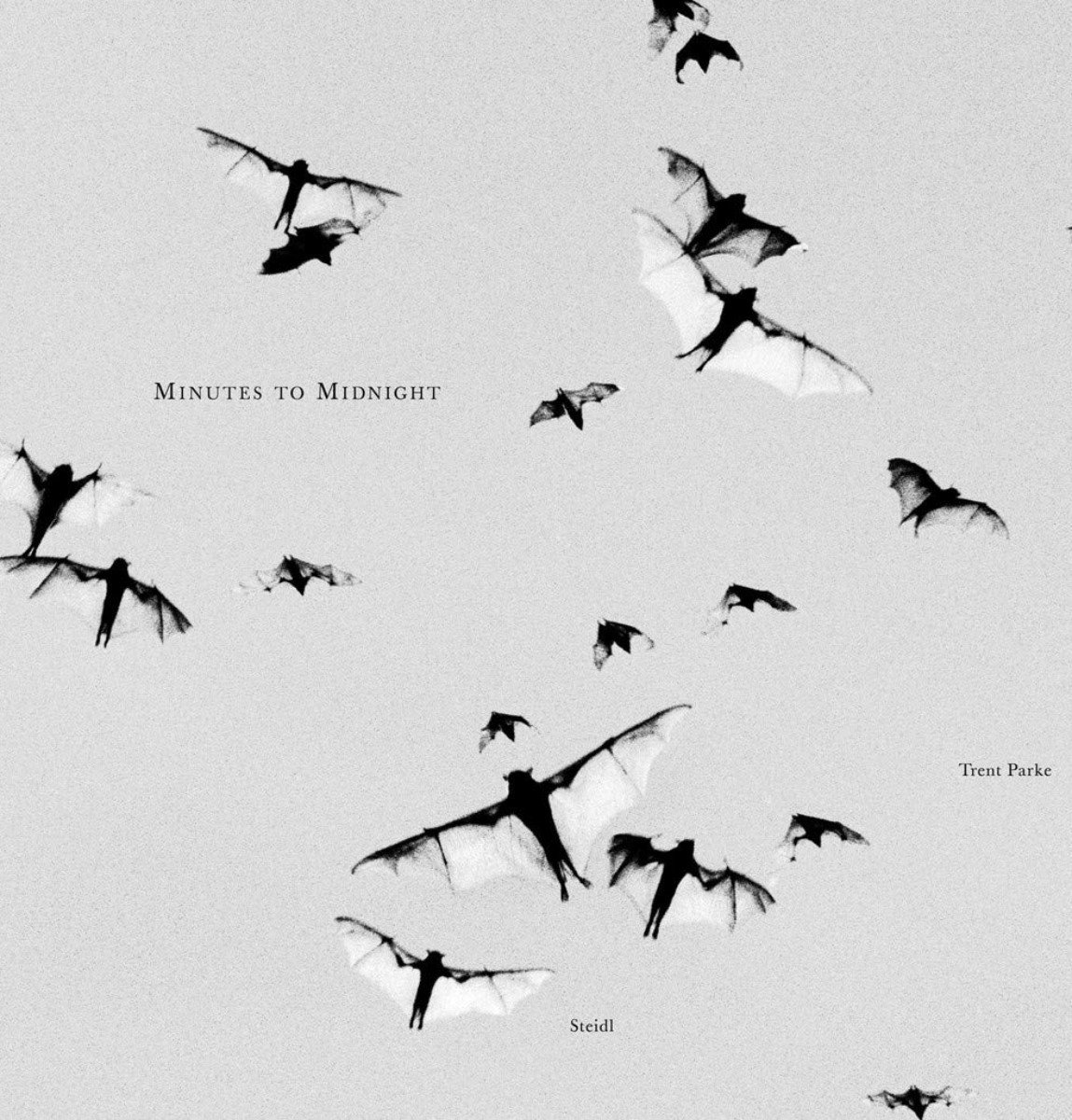 Minutes to Midnight is published by Steidl and available here