“Don’t worry about the world coming to an end today.
It is already tomorrow in Australia.” – Charles M. Schulz

In the 1840’s and 50s, Australia’s photographers were mainly from the US or Europe and travelled around the nation selling portraits to those who could afford it. George Goodman, an Englishman, established the first professional studio in Sydney in 1842, having taken lessons from Frenchman Louis Daguerre. This was essentially the beginning of the rise in demand for photography in Australia and quickly blossomed into a tool for all kinds of artists to express themselves. 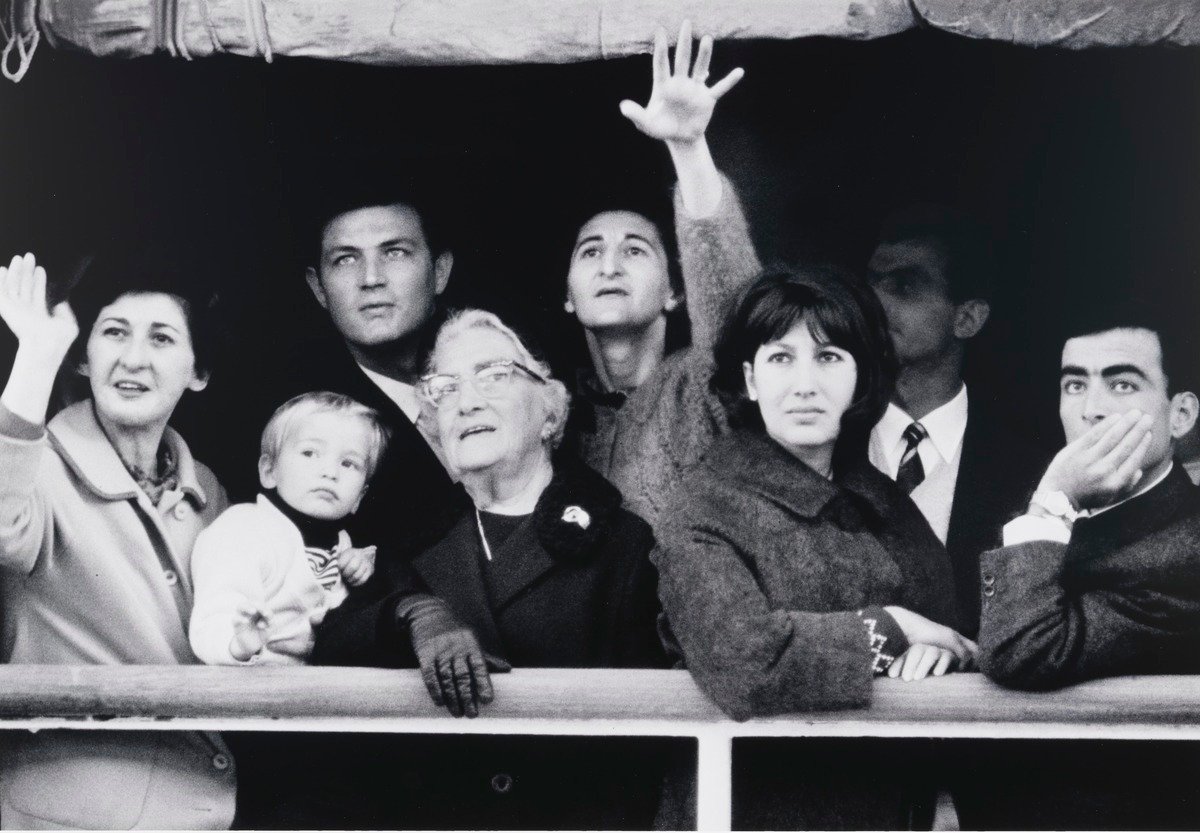 Eight migrants crowd round the rail of an ocean liner, the Galileo Galilei, as it arrives at Sydney’s Circular Quay in 1966.

Spanning 3 generations, their expressions reflect the mixed emotions of cohorts of immigrants searching for a life in postwar Australia. A symbol of changing national identity, David Moore’s famous image has since become an emblem of Australian multiculturalism. 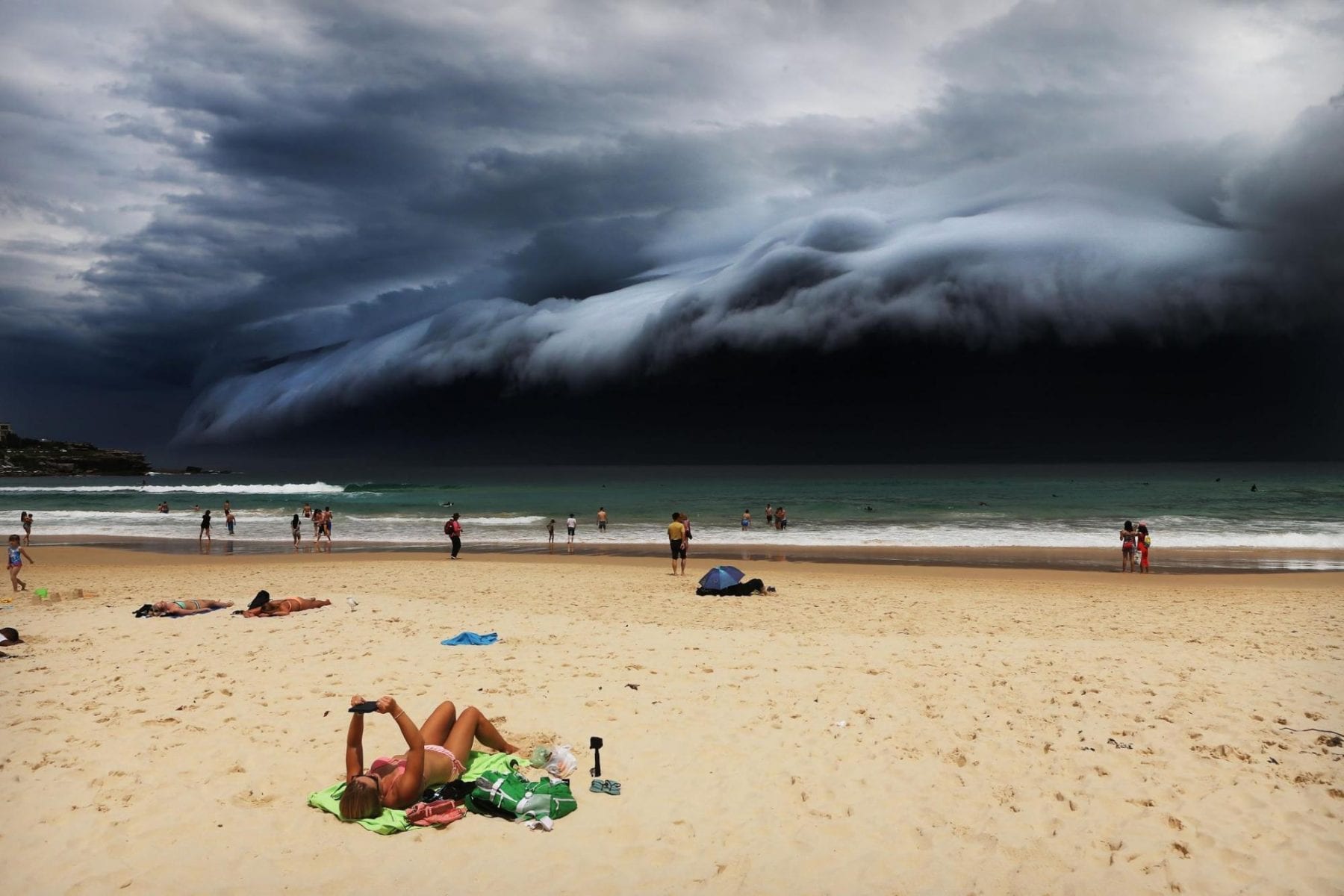 This image speaks for itself, demonstrating the immense power of nature and the awe it inspires in man. Rohan Kelly won first prize in the Nature, singles category at the World Press Photo Awards 2015 for his dramatic photograph of a storm on Bondi beach. The cloud was part of a weather front that brought violent thunderstorms, with local media reporting damaging winds, hailstones the size of golf balls, and heavy rainfall. Shelf clouds are low cloud banks often with smooth or layered surfaces, and black, turbulent bases.

An image well representative of the landscape’s  ‘grandeur’ and of the power of the natural elements in Australia, here we see people standing fearless and awe-stricken in the face of the incoming storm. 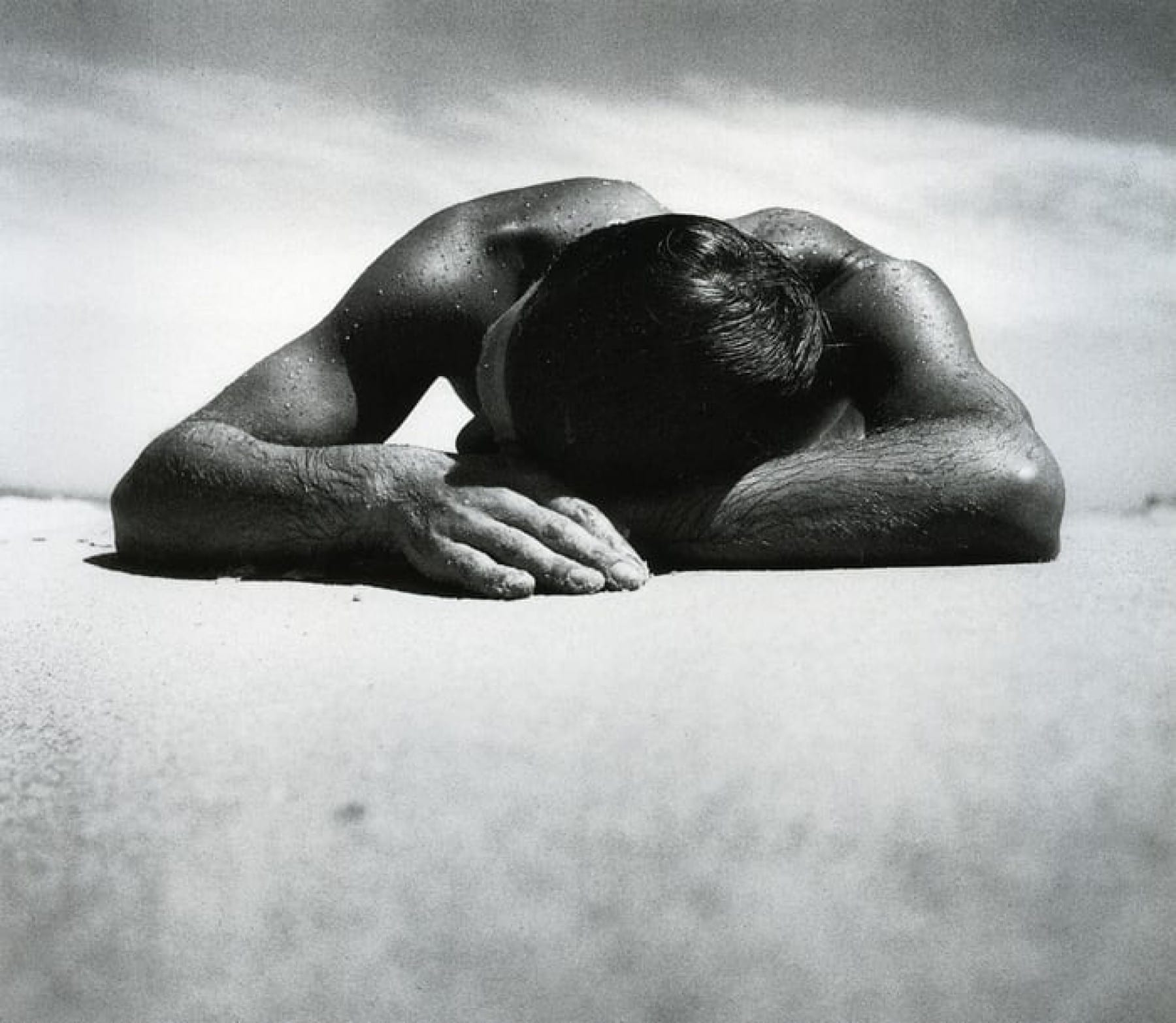 The Sunbaker is Australian photographer Max Dupain’s most famous work, and Australia’s most famous photograph. A low-angled, black-and-white image of a man’s head and forearms as he lies on a New South Wales beach this picture symbolizes the sun’s presence as an elemental force of physical and spiritual wellbeing.

From this image, the memories of bronzed Australian and New Zealand army corps are conjured, enough to give Dupain’s shot a nationalist resonance. Dupain has positioned his camera level to the ground in order to emphasise the Sunbaker’s unity and domination of the land he is laying on. 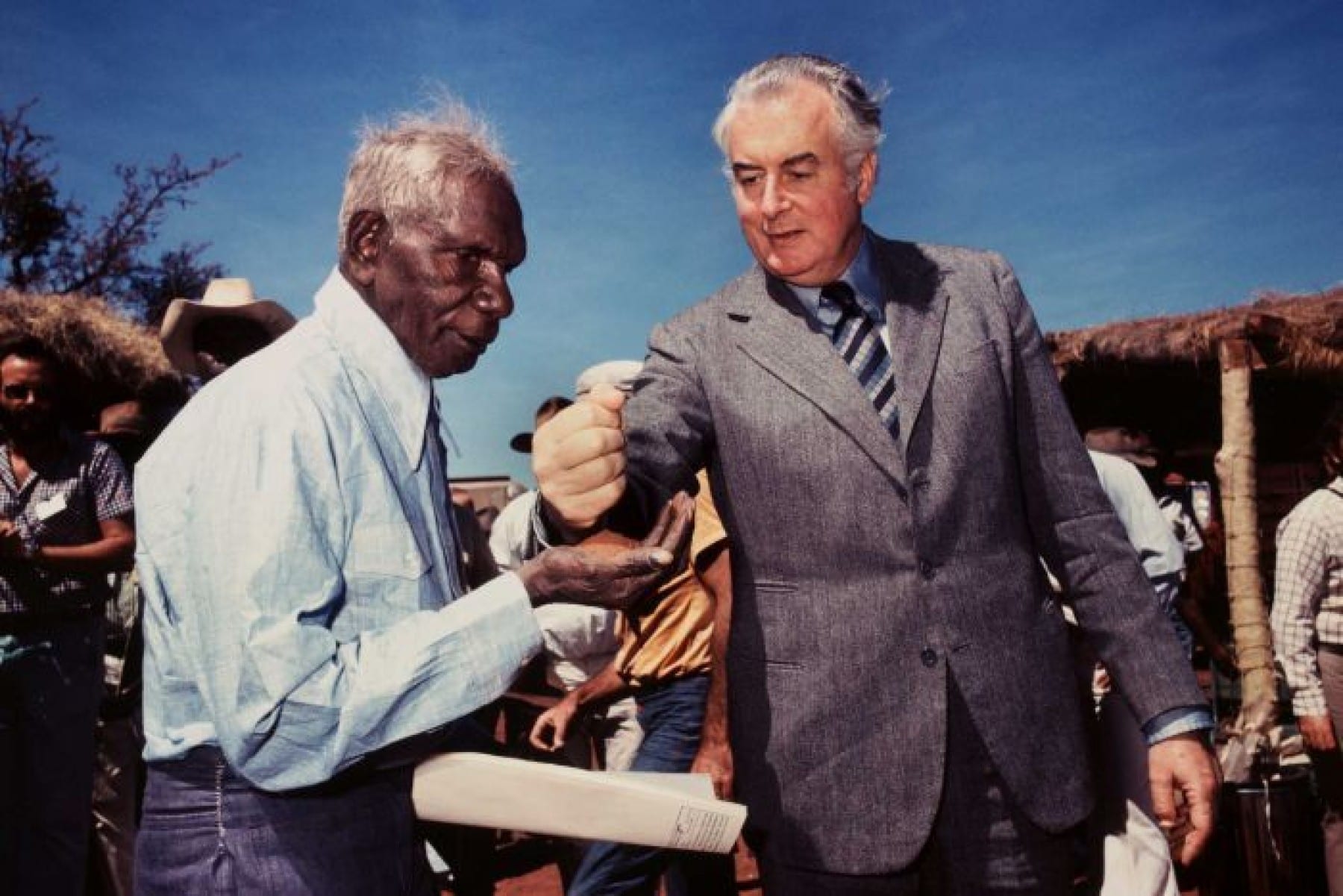 The 1970’s was an important era for Indigenous self-determination in Australia. From 1974 onwards, Mervyn Bishop held the position of staff photographer at the Department of Aboriginal Affairs in Canberra. In this iconic shot, Bishop documents the historic moment in August 1975 when Prime Minister Gough Whitlam handed over the deeds of Wattie Creek back to the Gurindji people. The physical action of the dry red earth falling from Whitlam’s hand into the Gurindji elder and traditional landowner, Vincent Lingiari’s palm, became an icon of the lands right movement in Australian photography.

The years of struggle are present on Lingiari’s face, but the motion of the two hands exchanging soil symbolically rectified the years of injustice for the Gurinji people by giving them back their ancestral lands. Mervyn Bishop was the first Aboriginal Australian to work on a metropolitan daily newspaper. In 1971 he was named Australian Press Photographer of the year. Bishop is a member of the Murri people. 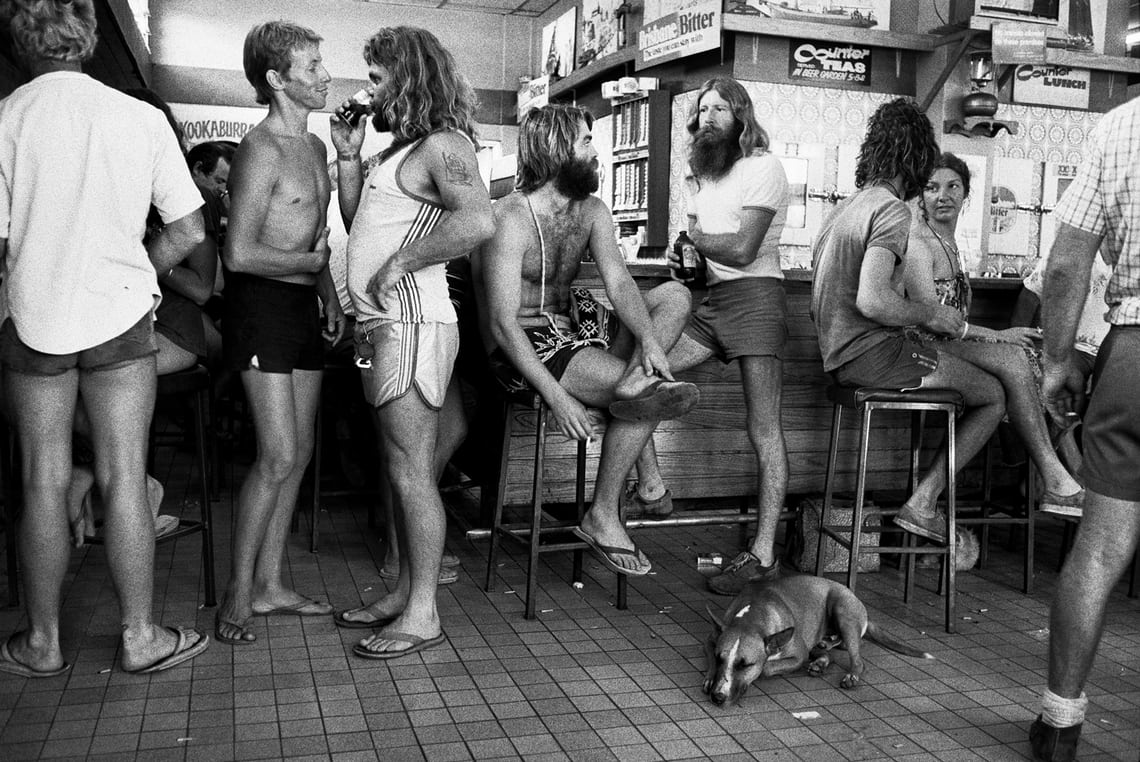 Reynolds “Rennie” Ellis was a social-documentary photographer who is best remembered for his observations of Australian life. Invariably shit with his own wit, personality and empathy for the Australian people, his works have become icons of “Australiana” and now form an important historical record of Australian life in the 1970’s and 80’s.

Exploring the nascent subcultures of the time as well as small-town life as Australia developed as a nation Ellis captures the quintessential Australian character in this light-hearted picture ‘At the Pub’ which singularly sets the tone for the rest of his work. 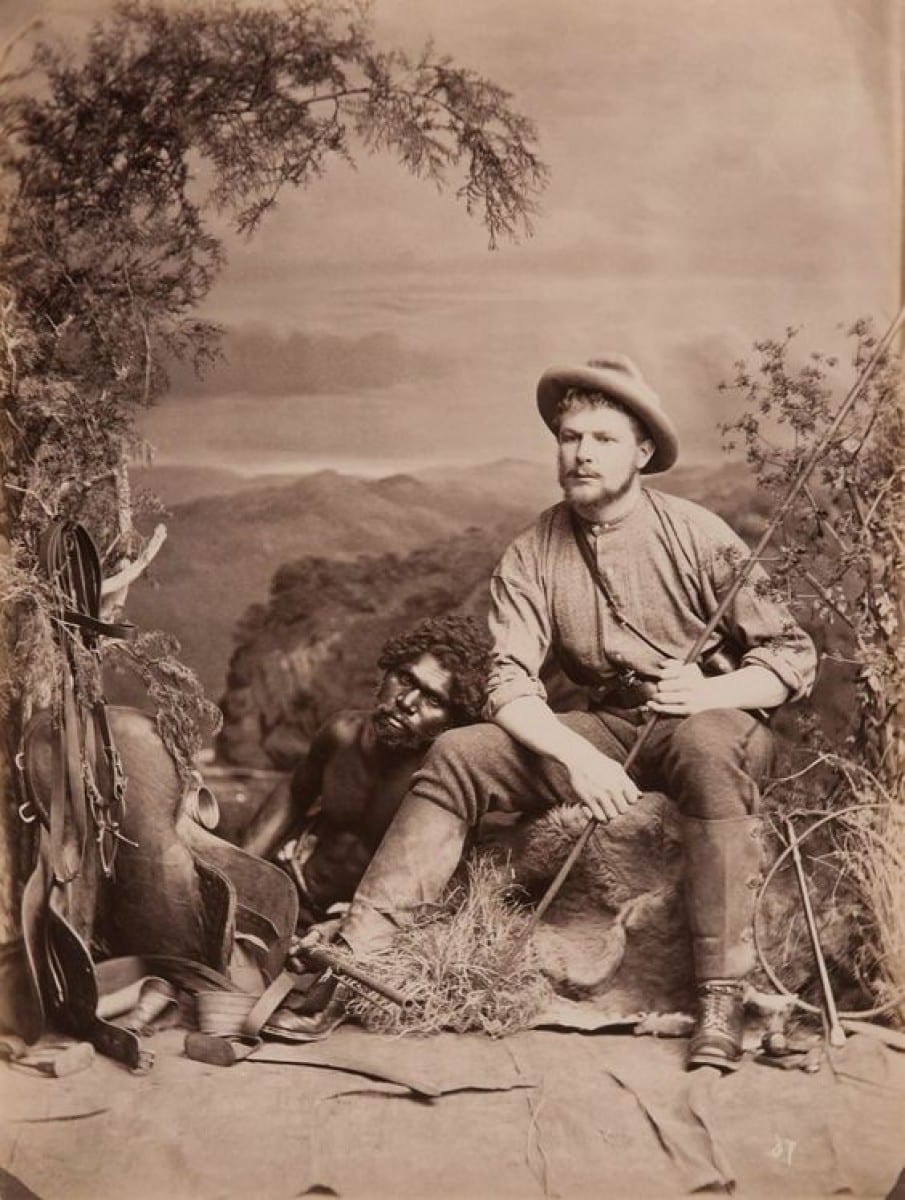 Frankfurt-born John William Lindt came from a wave of photographers who travelled to Australia determined to document this new, strange land. Lindt took carefully posed tableaux images in his Melbourne studio in the 1870’s. One unusual image shows a settler holding a spear and a local man holding a rifle and suggests an exchange of cultures which is not usually seen in Australian history. Without attempting to whitewash history, Lindt was optimistically suggesting a union that wasn’t just about capture and exoticism.

However, one must not forget the decision of the photographer to place his subjects in their respective positions- though Lindt is suggesting a union, the fact that the aboriginal man is seated at the feet of the white man still suggests a deep slave owner mentality. These images are hugely important artistic relics from a bygone era. 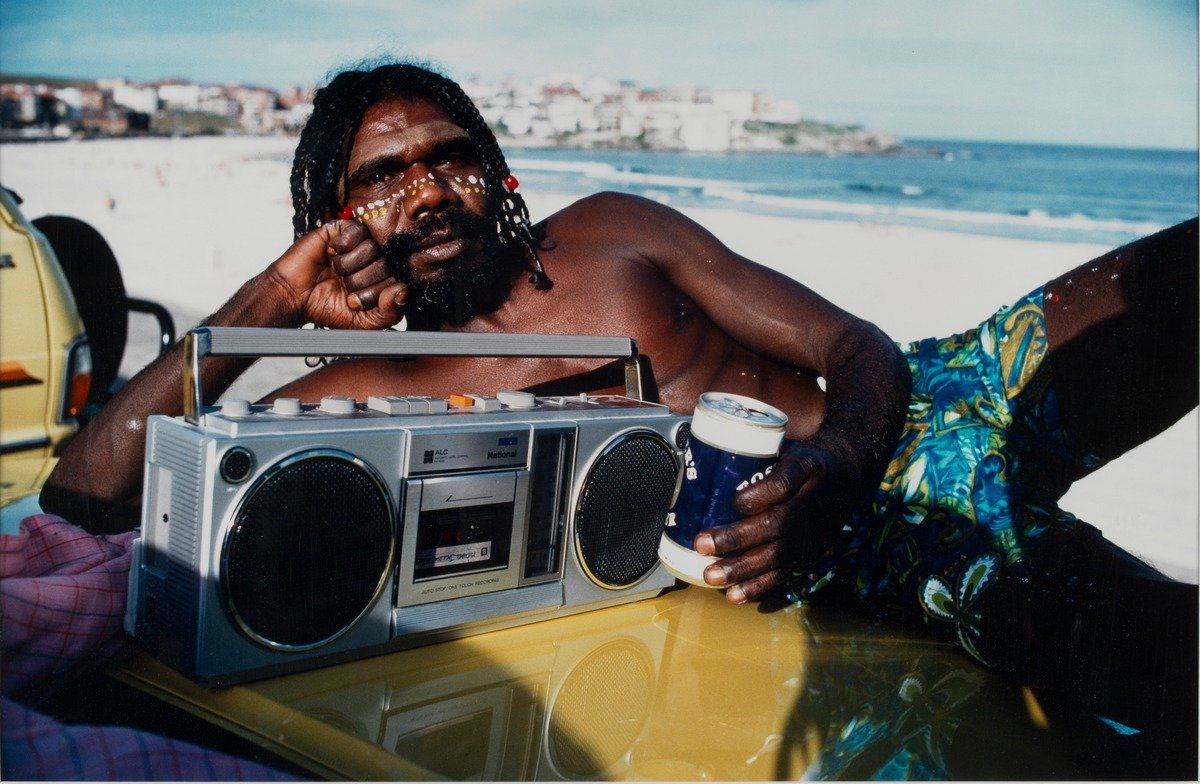 David Gulpilil is a Yolngu man who was raised in the bush and educated in the customs of his people. At sixteen, whilst filming his Australian film Walkabout, British film director Nicholas Roeg “discovered” Gulpilil whilst he was performing a traditional dance. Roeg carved out a role for Gulpilil in his film and subsequently Gulpilil was cast in more roles including Mad Dog Morgan, The Last Wave and Crocodile Dundee.

The portrait of Gulpilil exemplifies the early work of photographer and filmmaker, Tracey Moffatt whose work often focuses on Australian Aboriginal people and the way they are understood in cultural and social terms. Her ambivalence about being categorised as an Indigenous artist is at odds with her commitment to the fostering of Aboriginal culture and she often explores deep-seated issues such as the wounds of Imperialism. 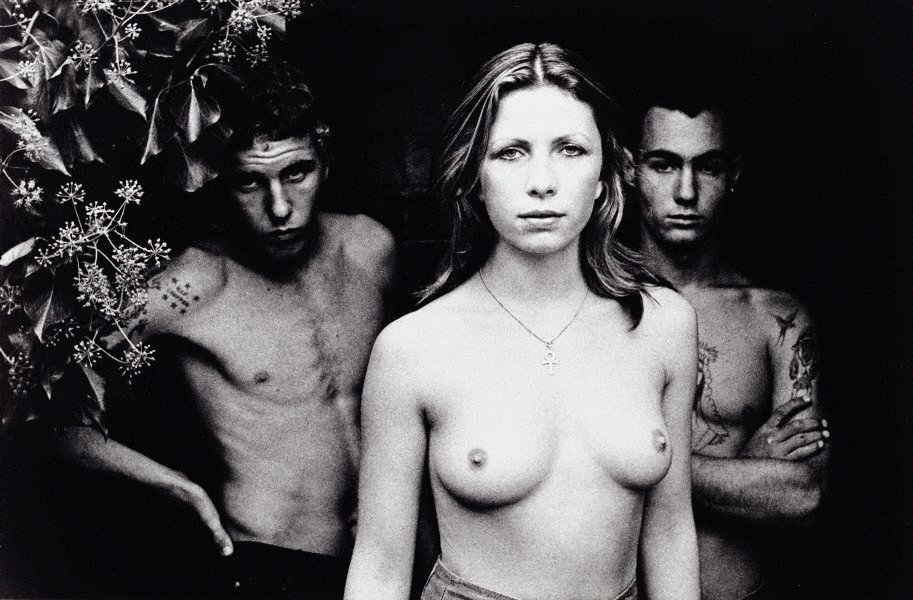 Carol Jerrems’s photographs are emblematic of 1970’s counter cultural optimism. Her work captures friends and acquaintances and emerged from her strong commitment to feminism and broader social change.

A quintessential image of the 1970s, Vale Street can be read both as a sociological document and as a wholly subjective work of art.  As the individuals respond to the presence of Jerrem’s lens, the figures compose themselves into their natural states. Vale Street suggests the struggle between gender relations, adolescent sexuality and suburban mores that governed the early 20th century and were overturned in a decade of radical thought. 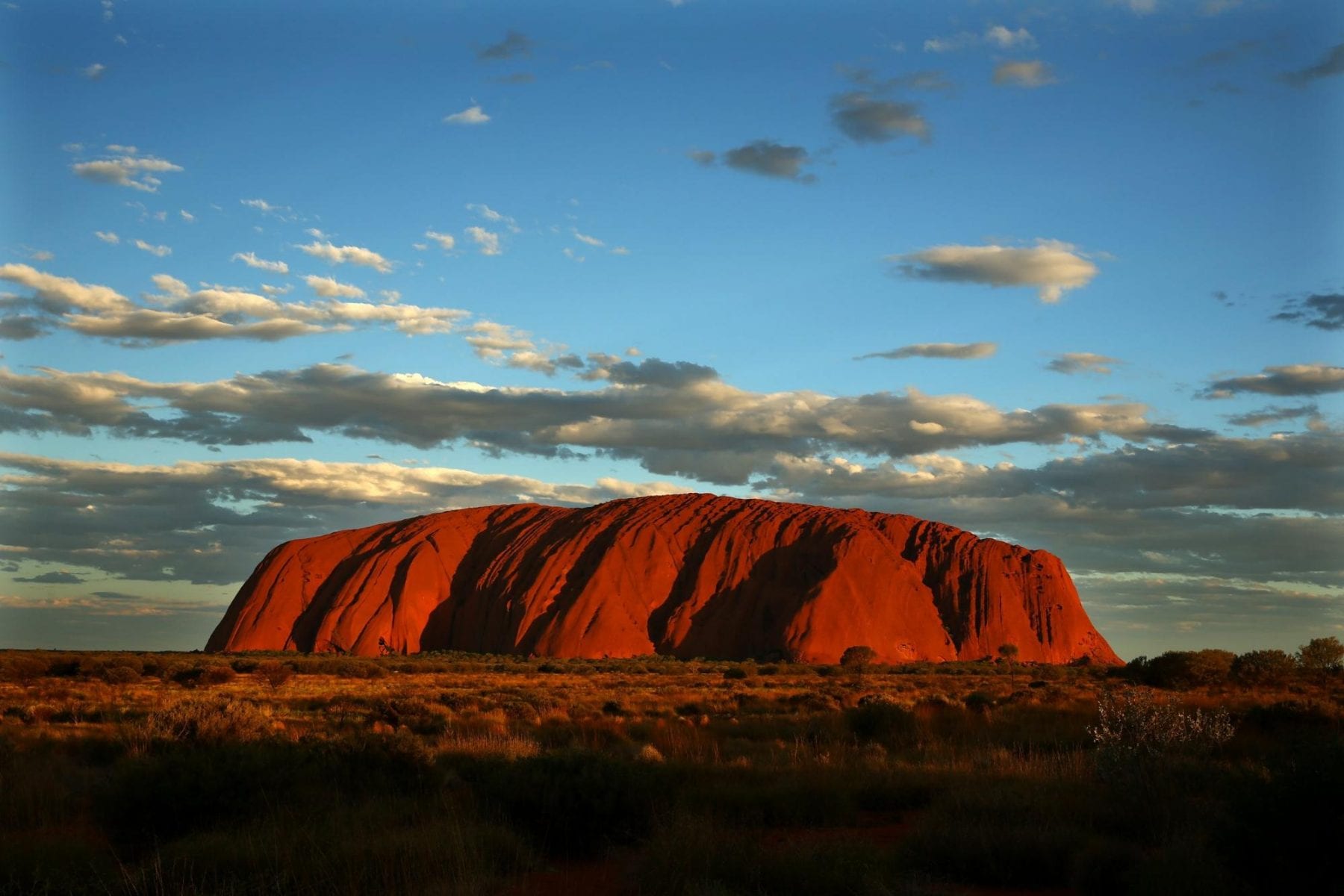 They call it the heart of Australia. Uluru, otherwise known as Ayers Rock, is a 348m tall rock formation which dominates the heart of Australia’s Red Centre- a behemoth on the horizon, geographically and spiritually the country’s greatest landmark. Because of its spiritual connection to the Dreamtime narratives (the Aboriginal stories of creation), it is considered their most sacred mountain. There have been extreme conflicts of interest between the Anangu people and tourists, and in 2019 a ban on climbing the mountain will be implemented, so as to keep the landmark sacred for the people who have lived in the region for centuries.

In this image, Mark Kolbe has successfully captured Ayers Rock at its reddest peak. One can completely understand why people have marvelled at its magnitude throughout time. Imposing and stoic, it speaks of the power of nature, and is a humbling thing to see on the horizon. 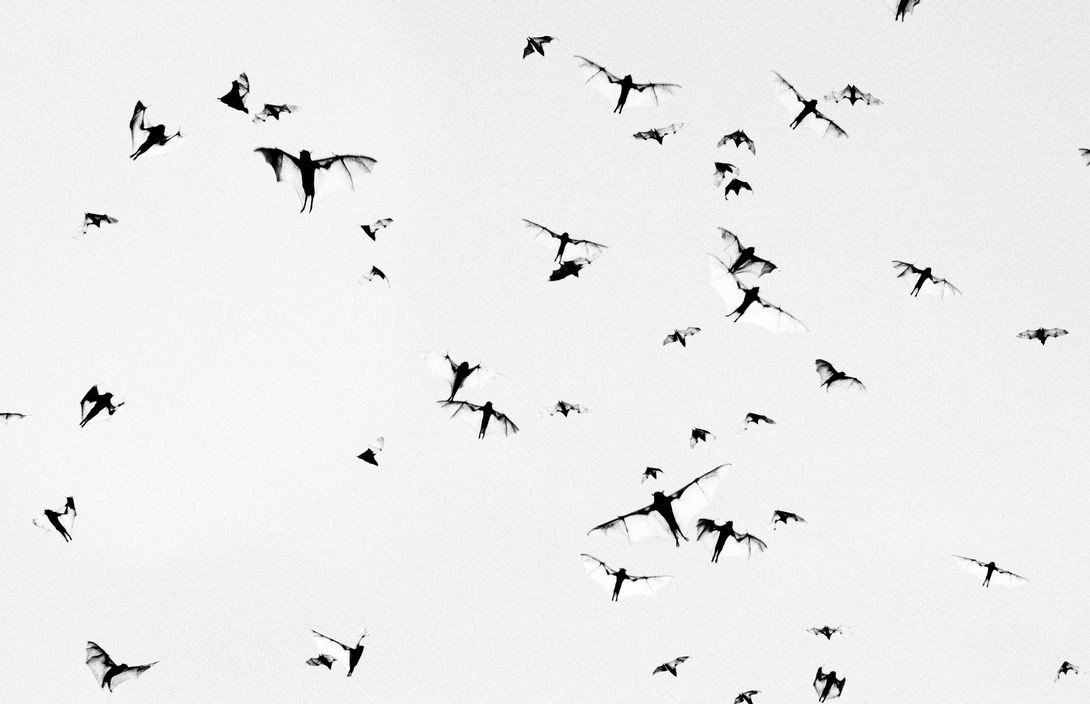 Trent Parke’s visually stunning series Minutes to Midnight has become a seminal series in Australian photographic history. Travelling 90.000 km across the country to document the nation, struggling to define its place in the world, Parke covers suburban and rural areas, capturing bizarre moments that look like they belong in a work of fiction with his radical perspective.

This image, which is only one small example of his exhaustive and fantastical work, represents Australia’s unique fauna and rich ecosystem for which it is world famous.