Directing photographs as though they were movies, Gregory Crewdson plays god with his surroundings, meticulously arranging every detail to create uncanny suburban scenes which are completely detached from reality.

The godfather of large-scale cinematic tableaux, Gregory Crewdson has made a name for himself by inventing a way of shooting that is so inherently unique. 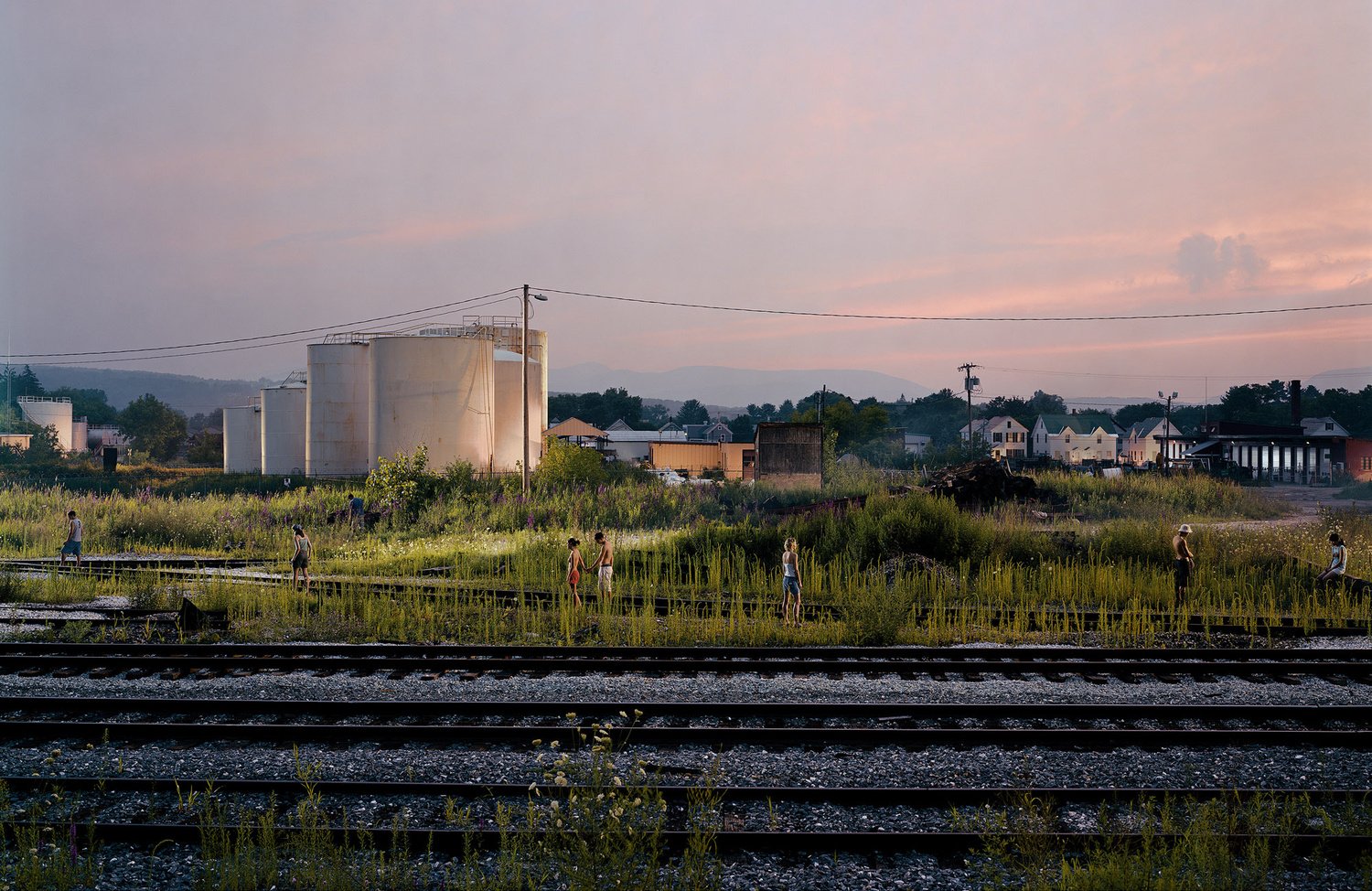 Born in Brooklyn in 1962, Crewdson had an early brush with photography, visiting the Diane Arbus retrospective at the Museum of Modern Art with his family at the age of 10.
Clearly impressed by photography’s potential, Crewdson later played in a teenage garage band called The Speedies whose first single was “Let Me Take Your Photograph.” 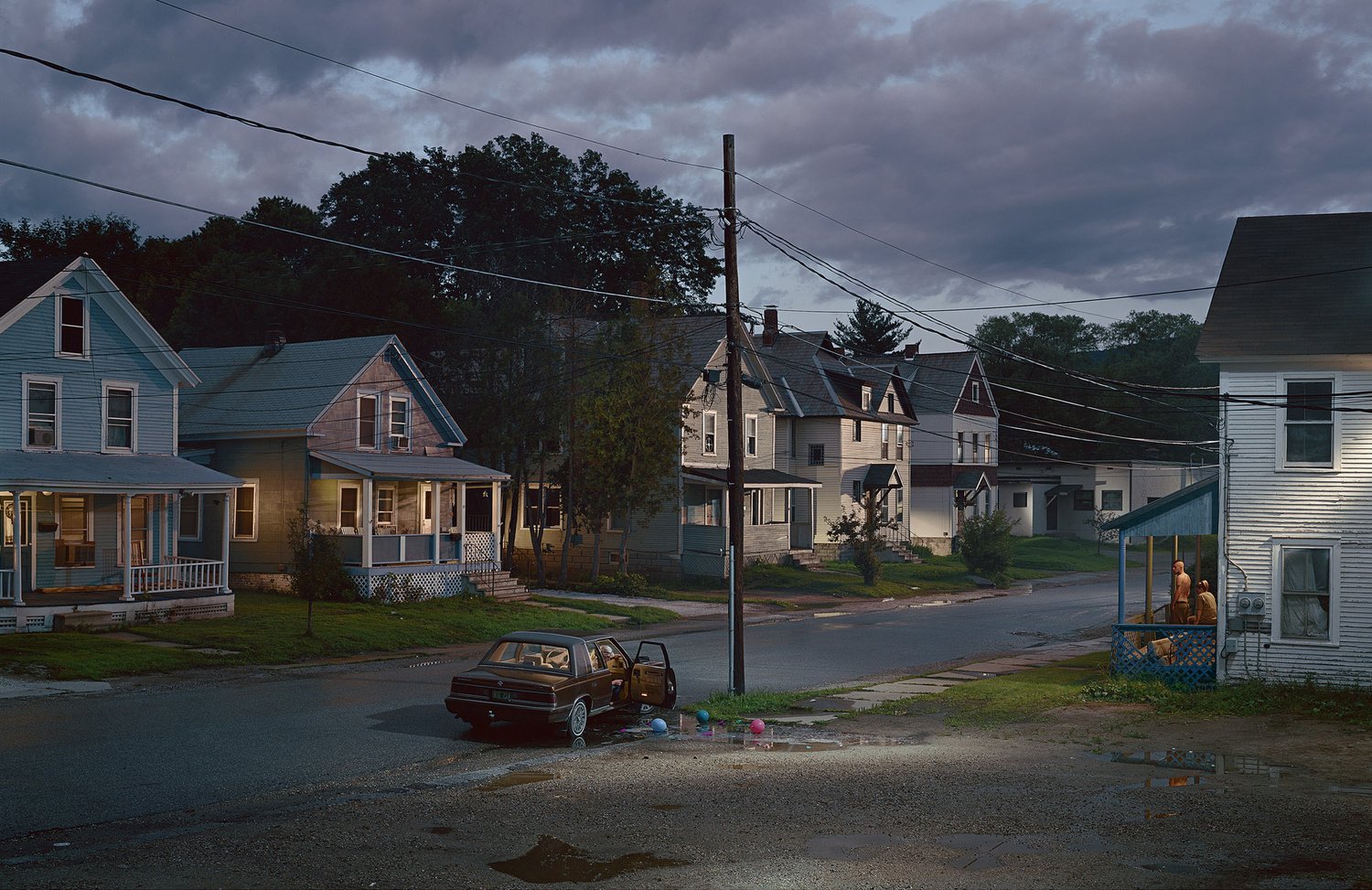 For his Master’s thesis project he took portraits of the residents of the area of Lee, Massachusetts, where his family had a holiday cabin. It was whilst shooting this project that Crewdson imagined what would later become his Natural Wonder series (1992–97), which consisted of photos of birds, insects and mutilated body parts presented in a surreal manner in domestic settings. This clash of domestic, suburban and surreal is what Crewdson would become known for. 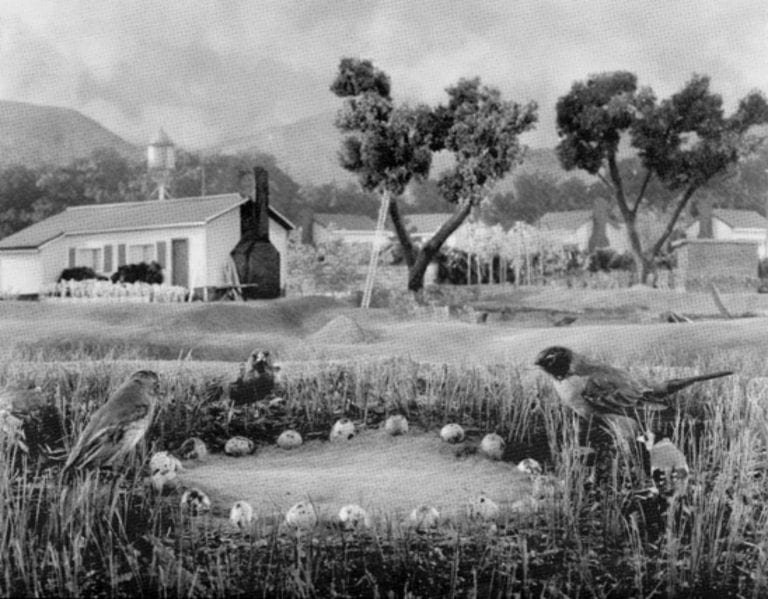 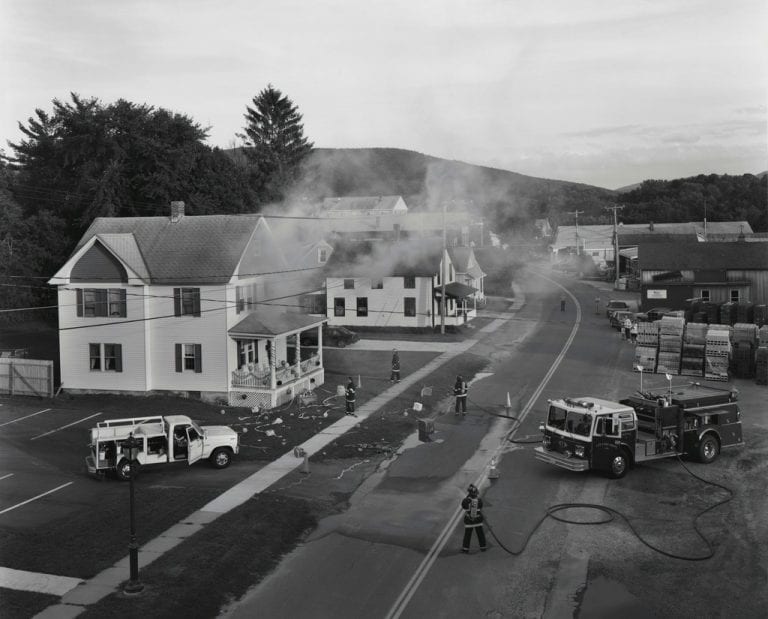 Moving away from close-ups and towards birds-eye-views, Crewdson also set his following series in the backyards of Lee. Once again focusing on strange scenarios, but working in monochrome, Hover (1995-1997) shows the darker side of suburbia by observing uncanny scenes in which the neighbourhood residents are observed by some omnipresent being.

“I’m interested in the question of narrative, how photography is distinct from, but connected to, other narrative forms like writing and film. This idea of creating a moment that’s frozen and mute, that perhaps ultimately asks more questions than it answers, proposes an open-ended and ambiguous narrative that allows the viewer to, in a sense, complete it. Ultimately, I’m interested in this ambiguous moment that draws the viewer in through photographic beauty, through repulsion, through some kind of tension.” – Gregory Crewsdon

Untitled (The Father) from the series ‘Beneath the Roses’, 2005

His following series continued with these themes, but Crewdson developed his work by introducing colour and enlarged scale to his work. Twilight and Beneath the Roses are extremely cinematic bodies of work which recall the 80’s suburbia-set films of Steven Spielberg and other genre auteurs. 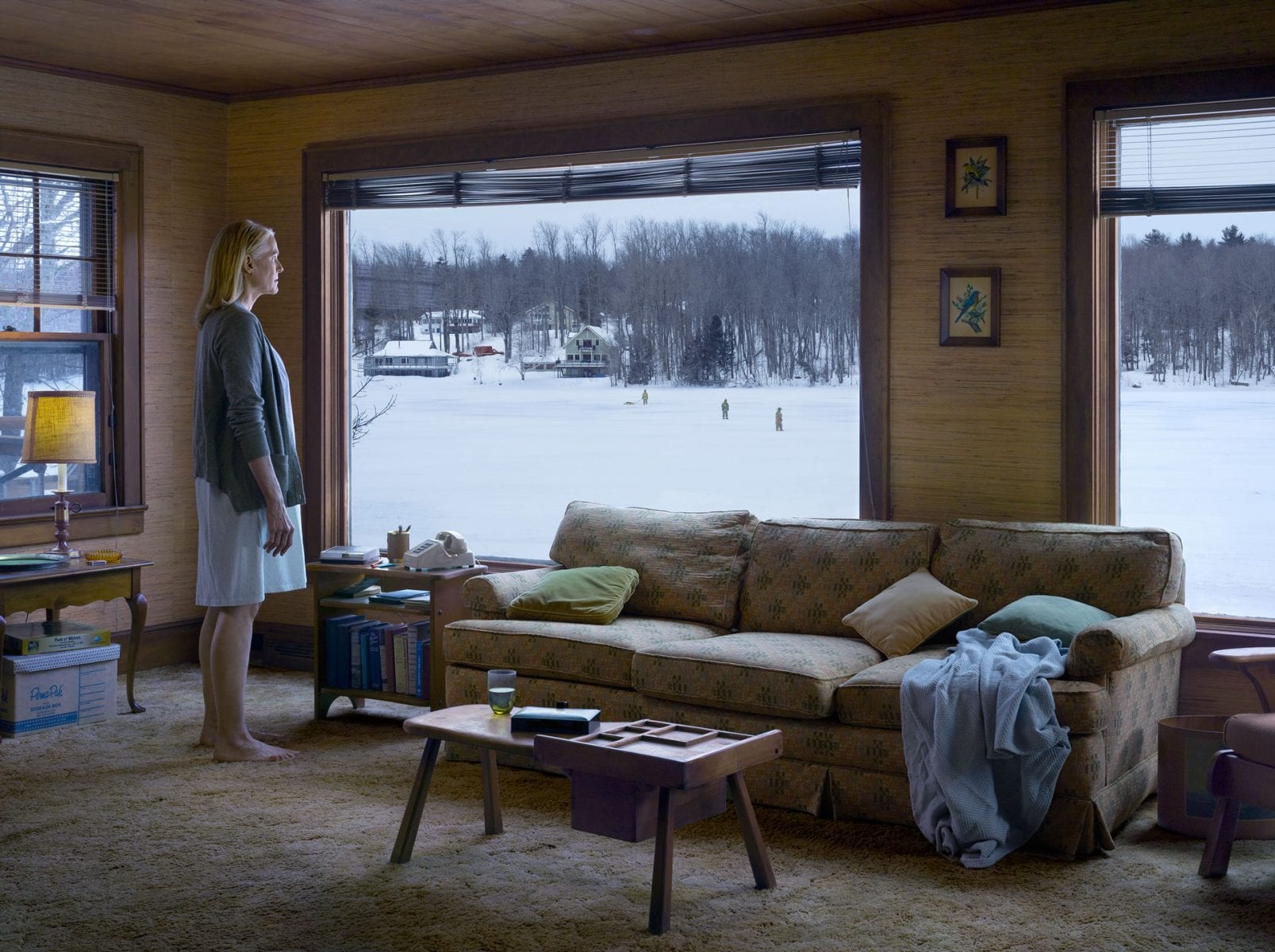 His ambitious photographs have become increasingly ambitious, and take a long and complex procedure to be born.

Crewdson usually employs a team of dozens of assistants, Hollywood-esque lighting, meticulously made sets and has even photographed some of the most memorable actors of modern cinema. He plans to direct a feature film in the future. 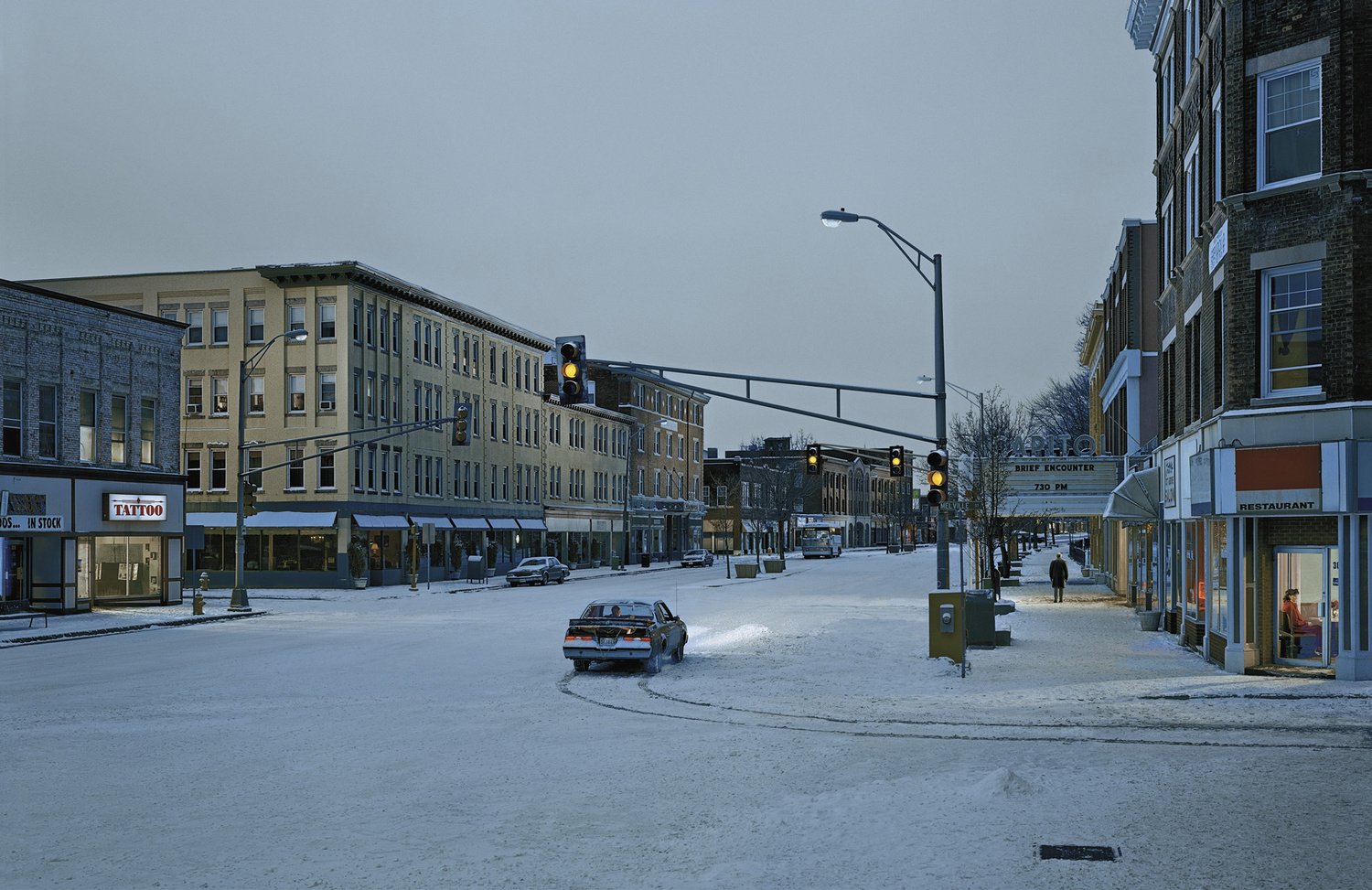 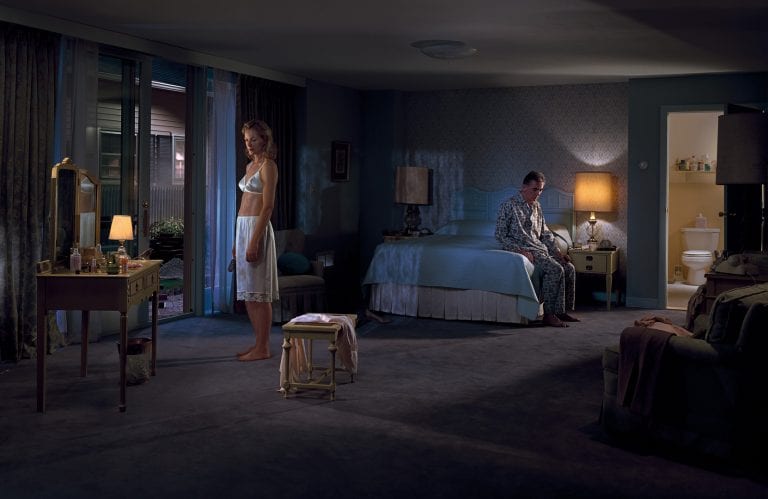 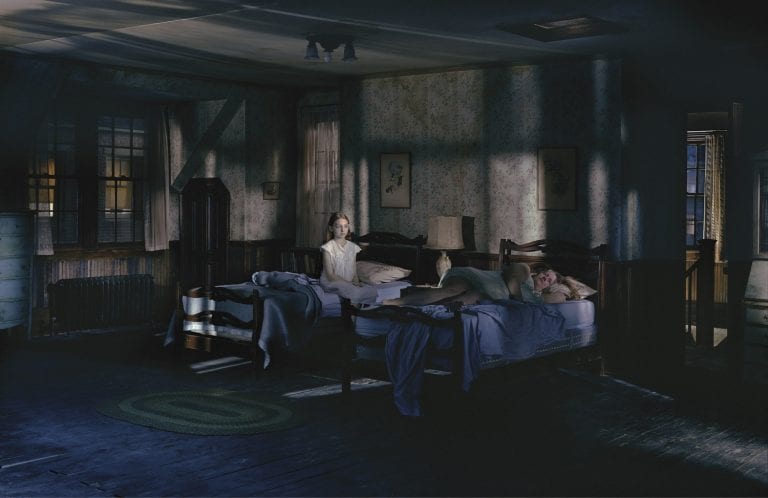 Crewdson has justified his attraction to the uncanny by claiming “ultimately, probably what scares me most is reality. When it’s a representation, when it’s separate from the world, it more effortlessly becomes poetic or beautiful.”

The son of a psychoanalyst, who grew up in suburbia, Crewdson clearly spent much of his youth imagining macabre scenarios to escape the monotony of young adolescence. It’s refreshing to see the work of an artist that employs a young imagination, tainted with the metaphorical fears and concerns of adulthood. 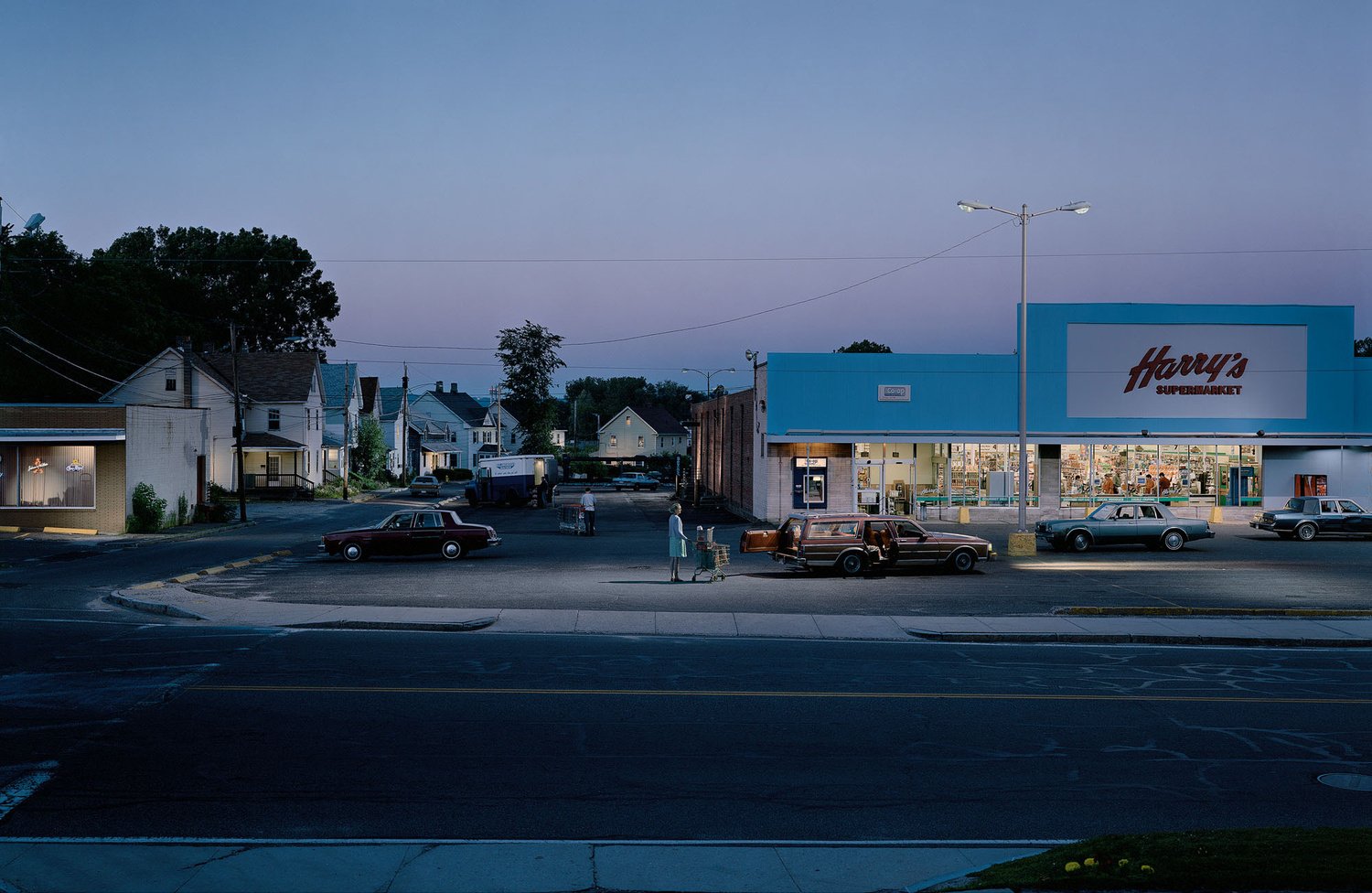 Best seen as prints, where one can pick out the details, his work is incredibly rich, complex and offers new narratives on repeat viewing.

Left open to the interpretation of the viewer, his photographs exist in a realm of metaphors influenced by the theatricality of the masters of cinema such as David Lynch, Stephen Spielberg and Alfred Hitchcock.

Untitled (Debutante) from the series ‘Beneath the Roses’ 2006

Infused with a sense of Americana reminiscent of the paintings of Edward Hopper, Crewdson merges the strange with the familiar, claiming to “choreograph” light in the imaginary plotless landscape of Massachusetts.

Crewdson’s numerous accolades include a National Endowment for the Arts Visual Artists Fellowship and the Aaron Siskind Foundation Fellowship, making him one of the most prestigious lens-based artists working today.