Mack publisher just released the second opus of Alessandra Sanguinetti’s following of two girls she met when they were 5 around her family farm in the Argentinian countryside.

In this second volume, “The Illusion of An Everlasting Summer”, we follow Guillermina and Belinda from ages 14 to 24 as they negotiate the fluid territory between adolescence and young adulthood. 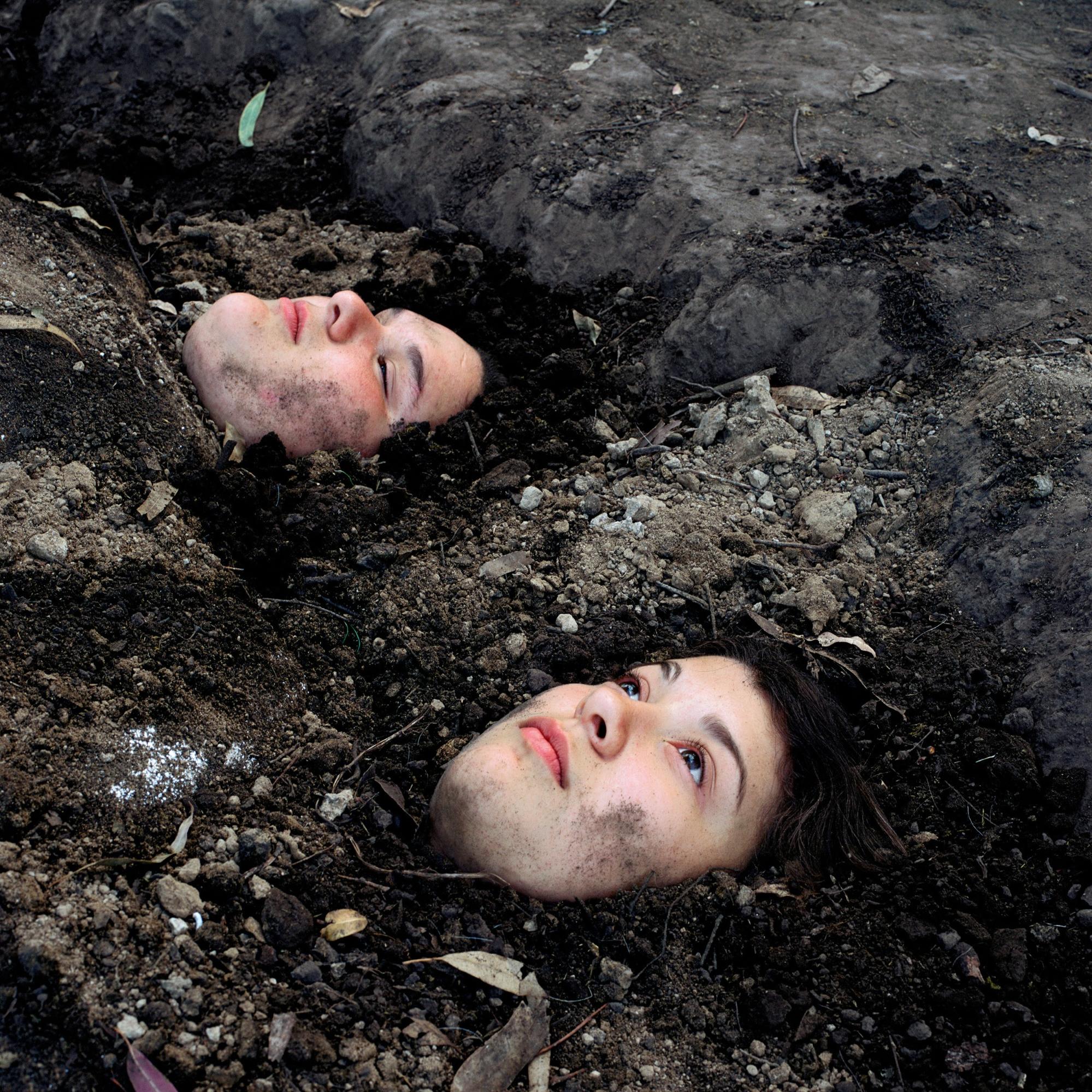 When we think about Argentina’s countryside, and especially the Pampas, mythological images immediately arise – gauchos riding freely, tough independent men in an empty land, with houses drawing dots on the vast plains. The reality that photographer Alessandra Sanguinetti portrayed is a different one; one that looks closer at the universes hidden inside these dots.

While working on a project about countrymen’s relationship to the land in the region where her family had a farm, she met two shiny little girls, Belinda and Guillermina, whom it soon became clear would be the heroines of a life-long project. “From the start, it was important to be telling the story of two girls. Because in Argentina, and especially in the countryside, women are invisible though they work as hard as men do. I took pleasure and was aware that I was paying attention to people that are never paid attention to”, Sanguinetti explains. 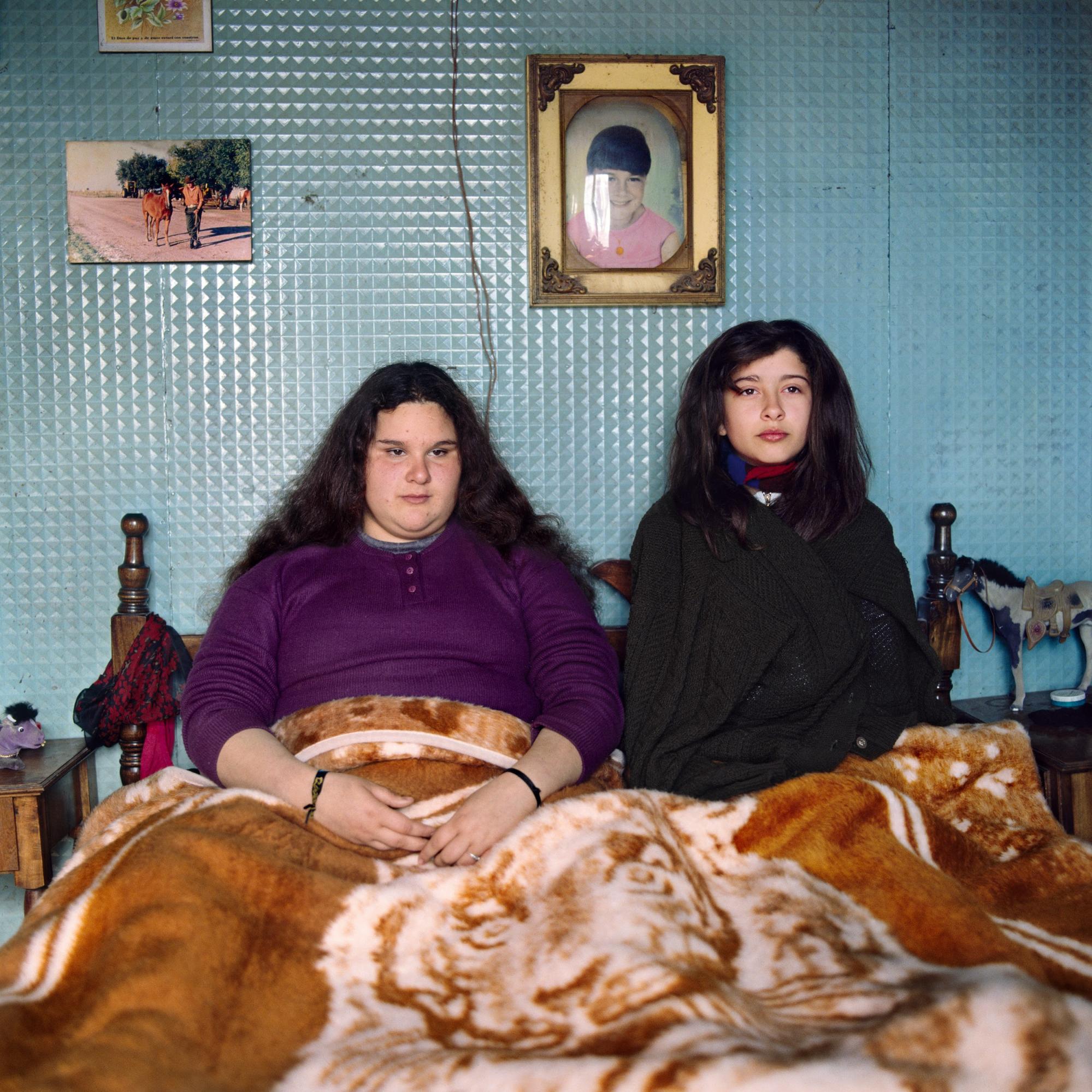 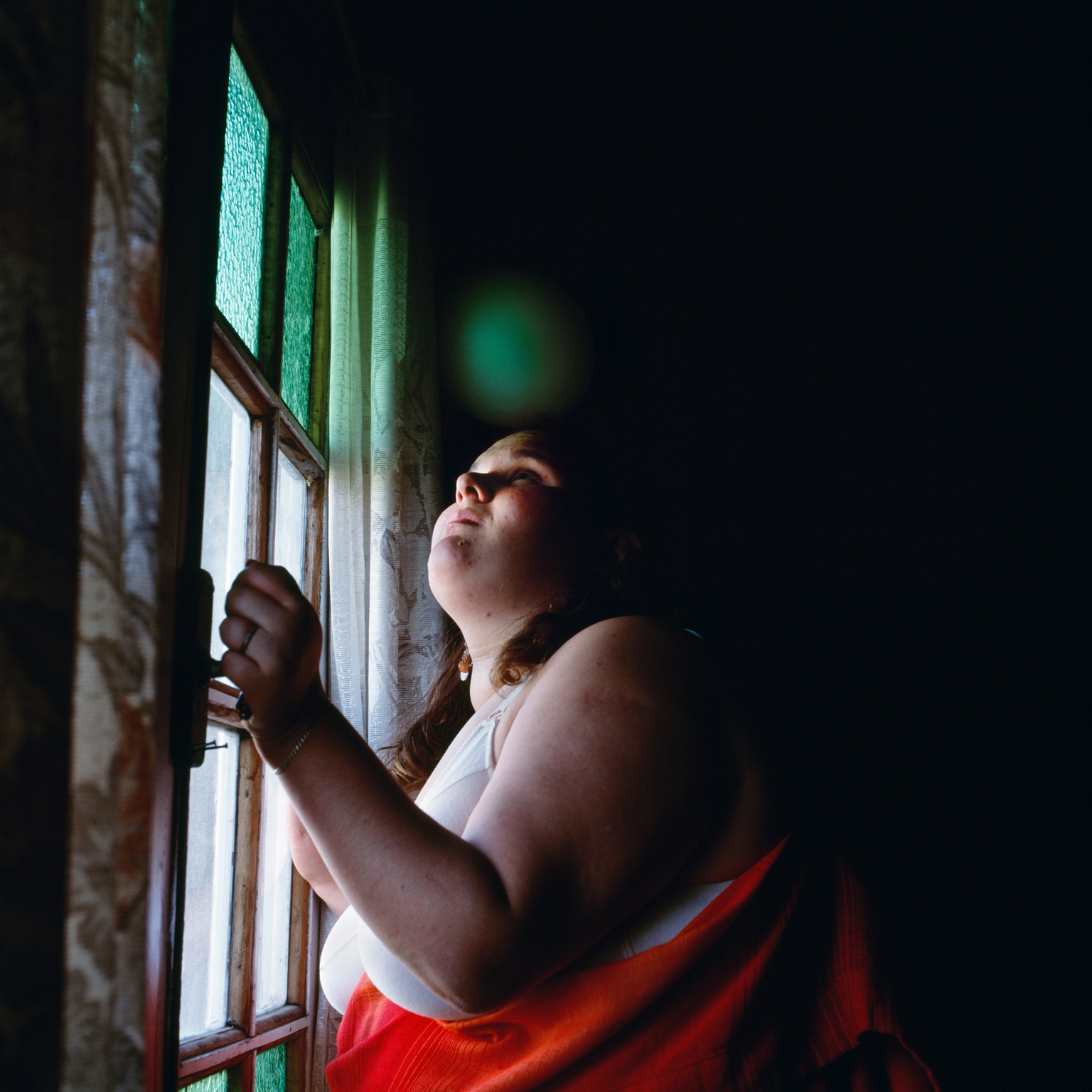 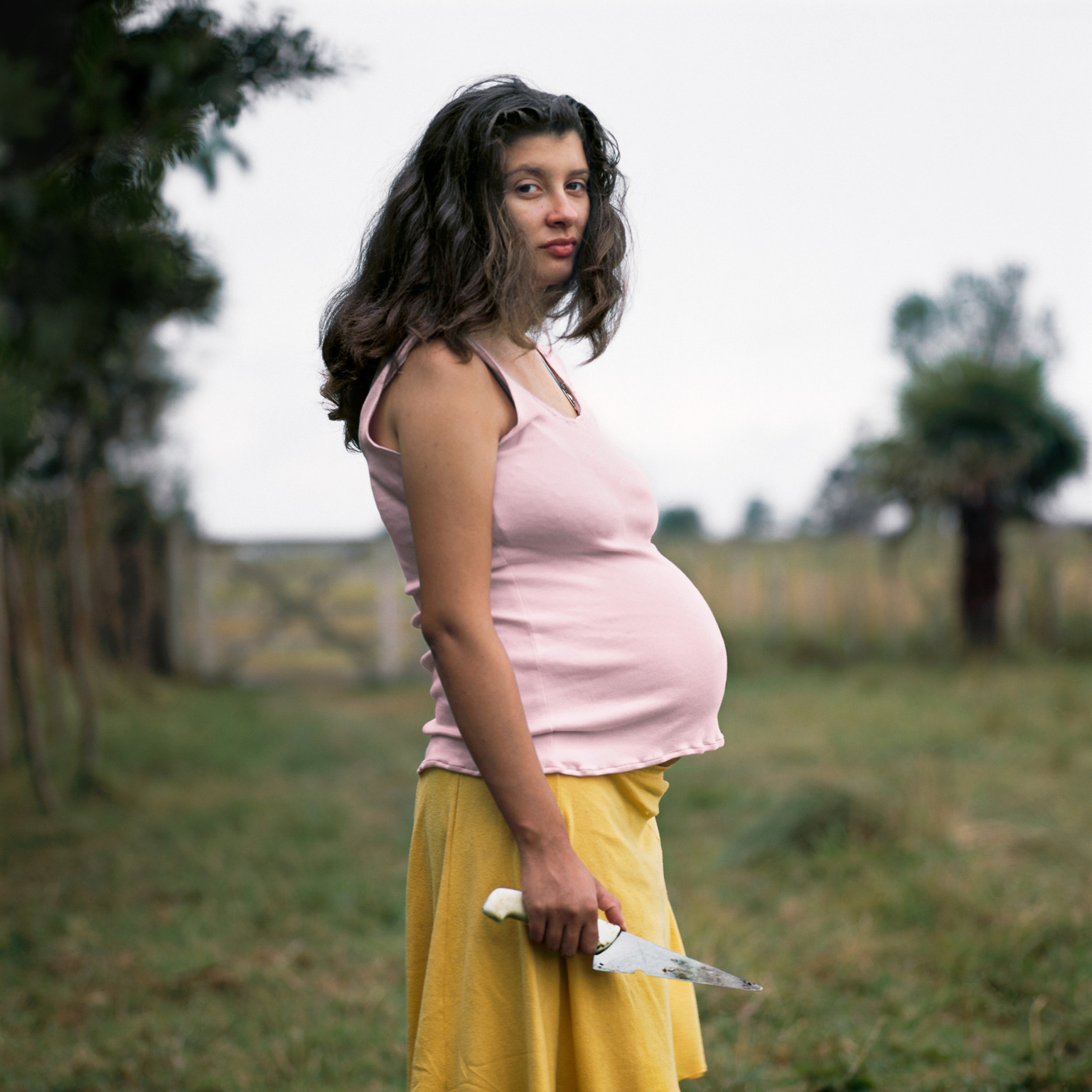 Twenty years on, the peppy girls have become women. They got married, had children, moved to their own houses, lived new adventures. Mack just published a new chapter of their life – one that roughly covers the past 15 years.

The process hasn’t changed. Sanguinetti co-creates a fable with the pair by setting up portraits evocating both their dreams and their reality. « There is an element of dreaminess because I think that’s also the way I see the world. I wasn’t interested in just photographing in an objective way. Whenever you tell a story it’s your own way of telling and interpreting reality”, she notes. 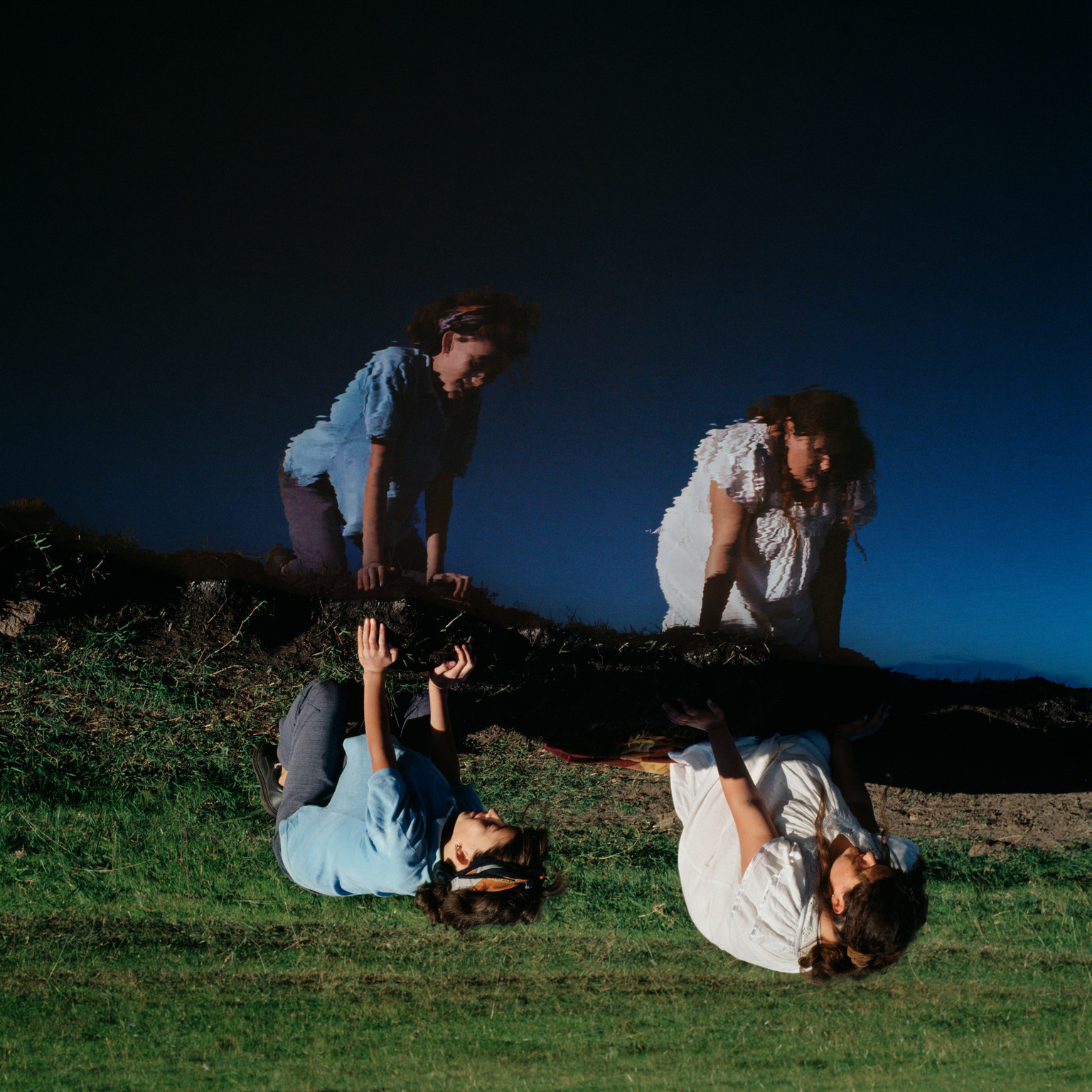 Sanguinetti would come up with an idea, inspired by a conversation they had, from a situation they experienced, or from a painting she wanted to imitate and the women would react to it, interpret it in their own life. “They’ve always had a say in how they’re photographed”, she says. “I can come with a very clear idea and then, it changes once I’m with them, and once they react to it. It’s an organic thing that happens between us and a lot of times it might be recreating something that they’ve done before, or exaggerating something, making it more important.” 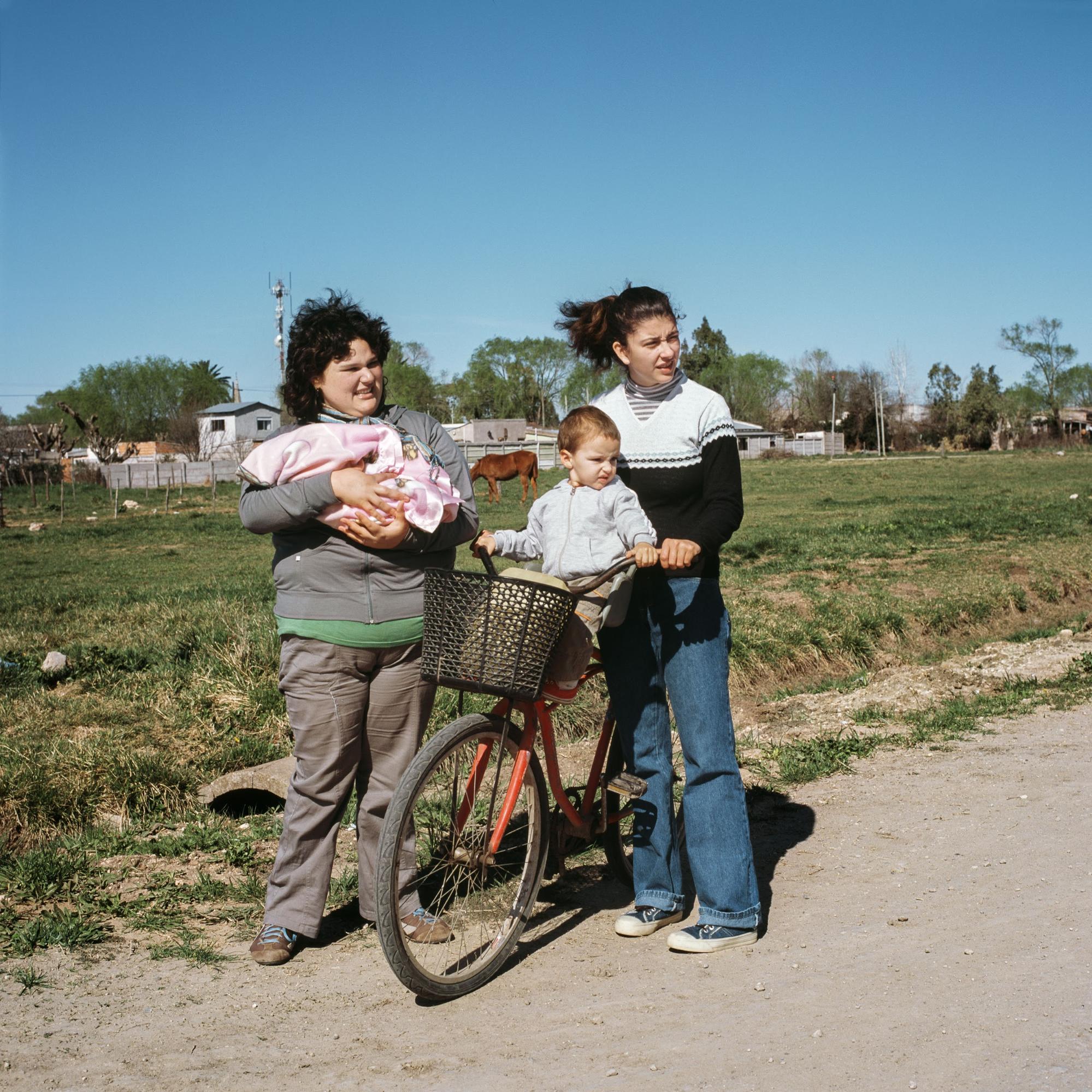 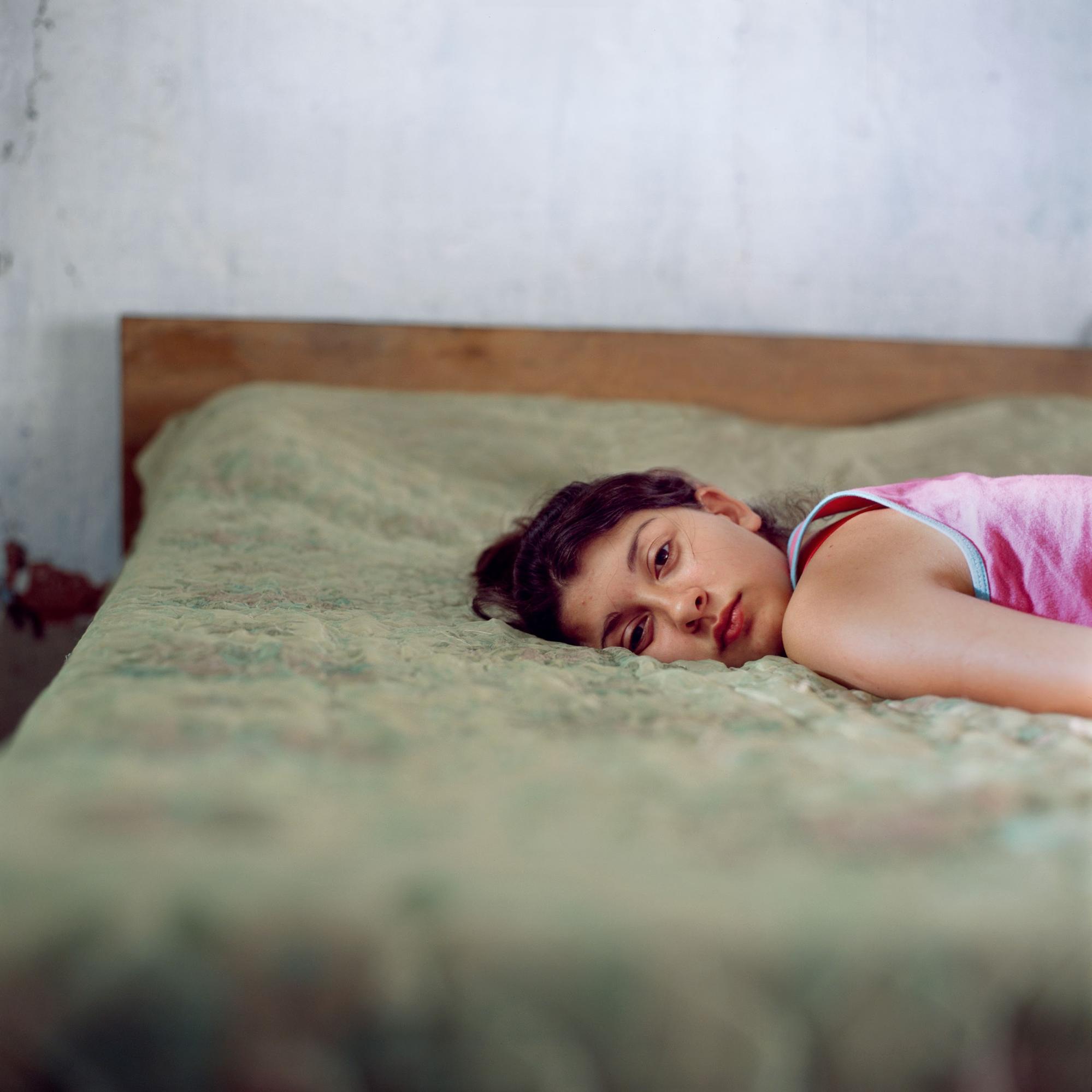 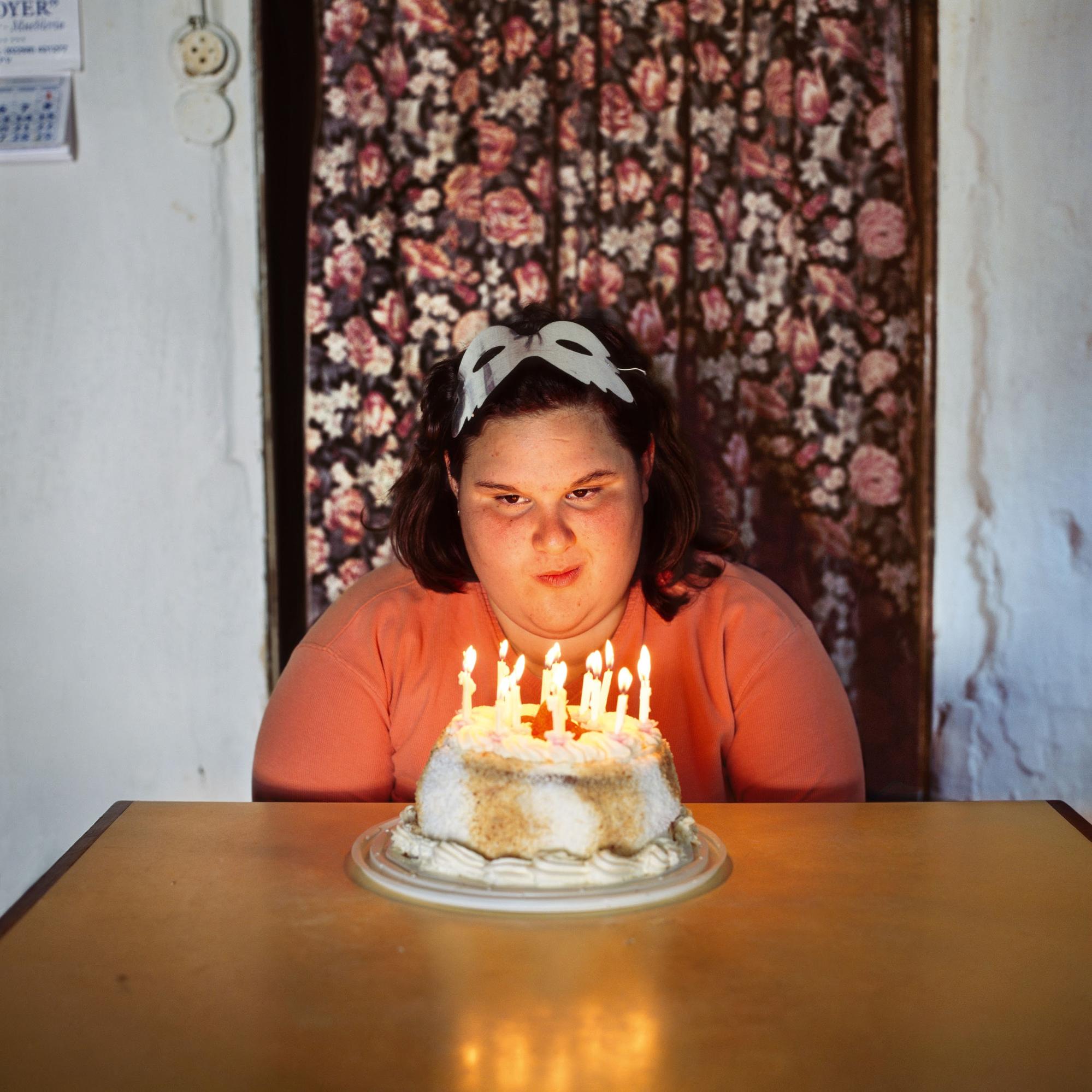 This sincere, spontaneous collaboration infuses the work with some dreaminess that doesn’t prevent their social context to emerge. We witness two teenagers losing the freedom of childhood, with many photographs working as metaphors for this passage: horses are a recurring theme, though always trapped in a poster; one photograph shows Belinda walking down the dirt road, her hands filled with blood; another captures them buried, with only her faces uncovered.

“As we all know adolescence can be really joyful but also really tough. You get into moods, you’re trying to understand what your life is going to be, what you’re going to do with yourself. It’s a very different reality than when you were a little kid. I wanted to speak to that as well because they have to get on with their life, they didn’t have the privilege of just figuring out what they wanted”, Sanguinetti comments. 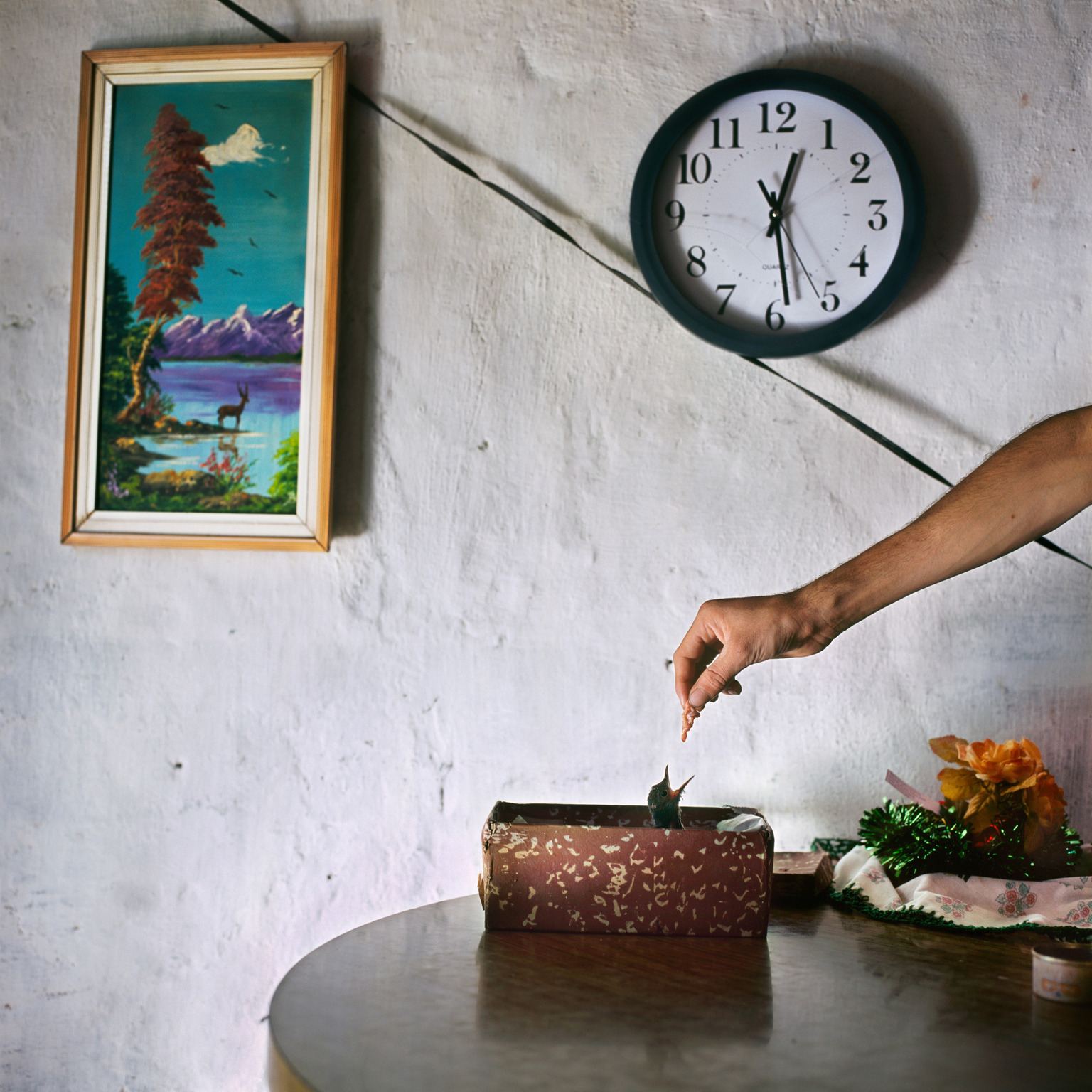 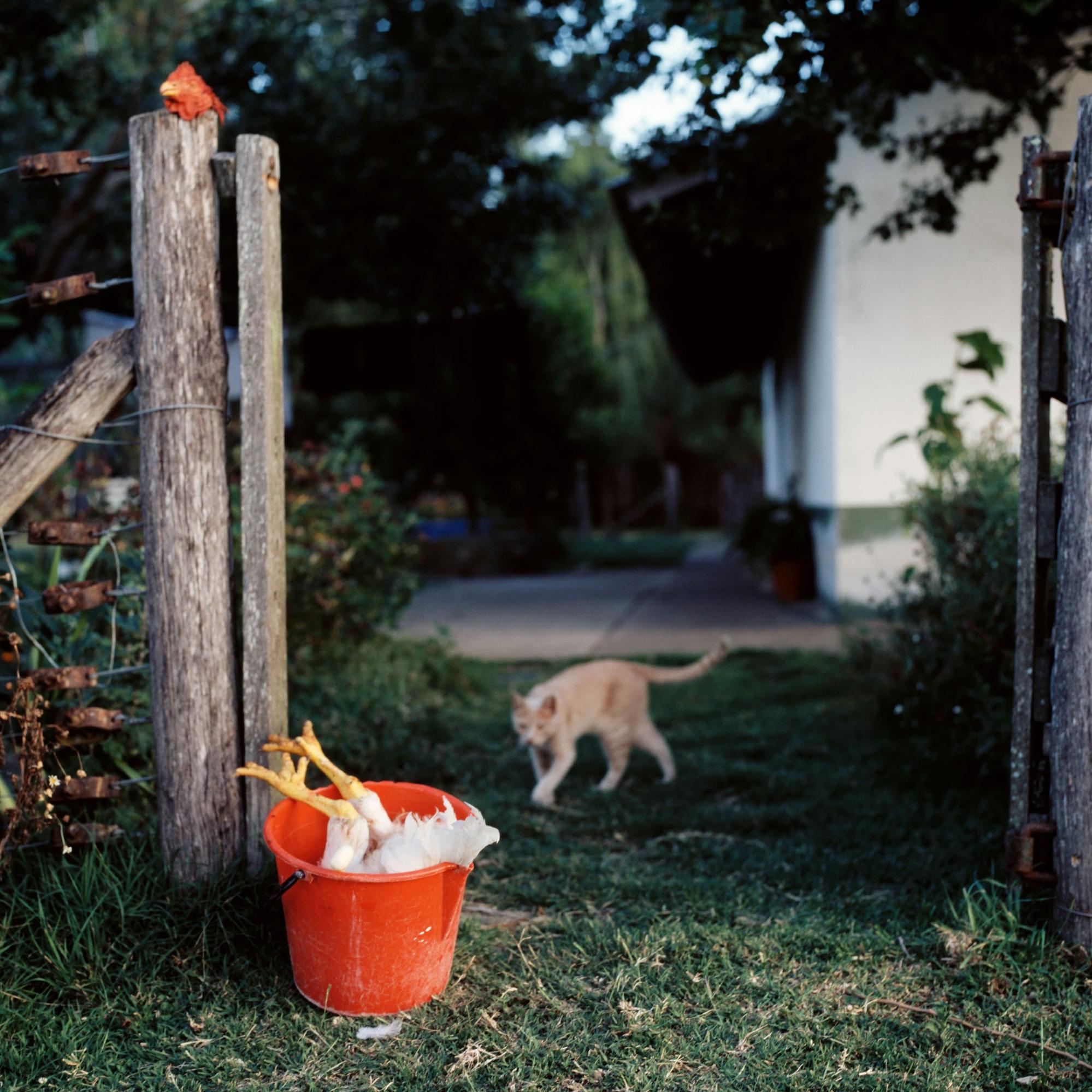 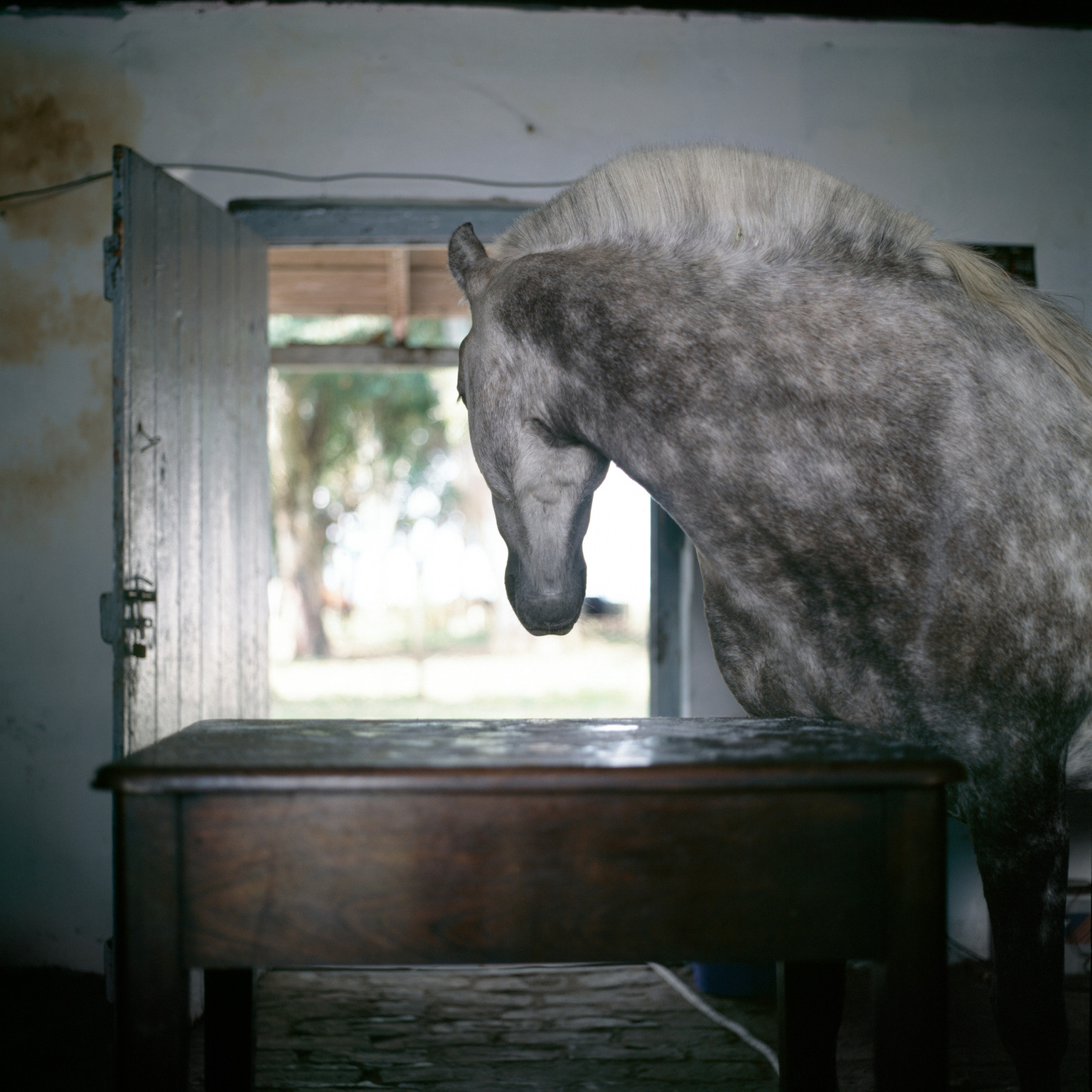 Pages after pages, they are not the children of the book anymore – Belinda became a mum at 16, Guillerma a few years later. Elements of the surroundings are discrete yet more present than in the previous book. “There is a bit more context of how they live than in the first book because when you get older, where you live and what your house looks like matter to you”, Sanguinetti explains. These details also introduce their growing responsibilities.

Yet, they still play the game of pose, as if somehow prolonging childhood. In a photograph, Guillermina even drinks from the baby bottle in a both melancholic and humorous way. “The only one who is really nostalgic about being a child is Guillermina. That’s why that picture has a reason to exist”, Sanguinetti recounts. The title of the book – “The Illusion of an Everlasting Summer” – also comes from something that she said to me about how she misses being a kid.” 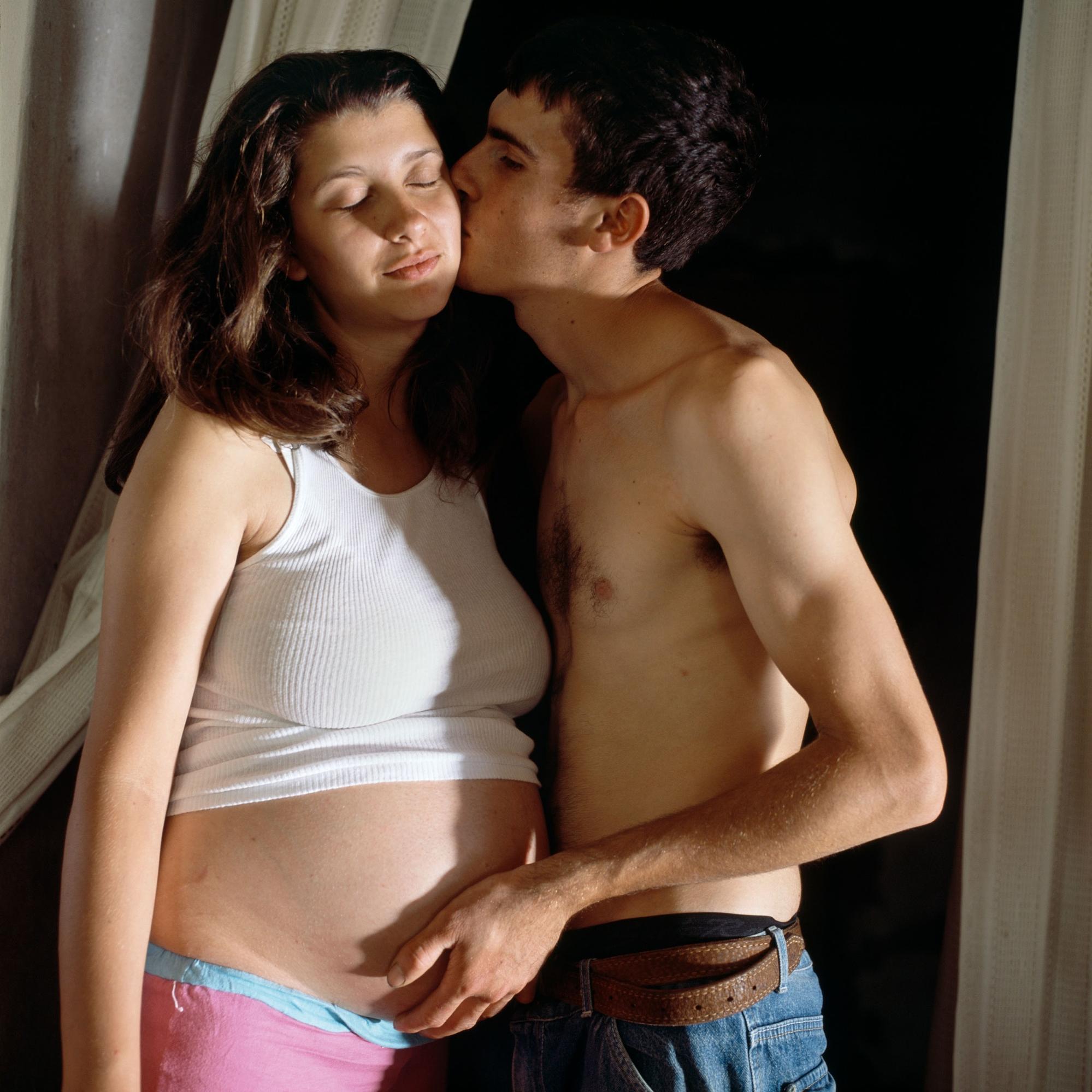 Beyond the overall narrative, each photograph works as a tableau, with multiple details that we notice when looking closely. Each of them is a story by itself. “If you let time go by you see things that you don’t notice at first”, Sanguinetti says – “That’s what makes it magical.”