Canon Inc. is the world’s largest camera manufacturer with a history spanning over 80 years, during which time they have made some of the most important innovations within both photographic and video technology.

Their beginnings, however, were humble: a small street-side workshop in Tokyo where a man by the name of Goro Yoshida repaired motion picture cameras and projectors.

A natural tinkerer, with a keen interest in the inner workings of machines, Yoshida was fascinated by the 35mm cameras of the German manufacturers
Leica and Contax, specifically the Leica Model II, and the Contax Model 1, released in 1932 and 1933 respectively. The iconic pair were, at the time, considered to be the finest 35mm cameras on the market, and had expensive price-tags to match their grandiose reputation. 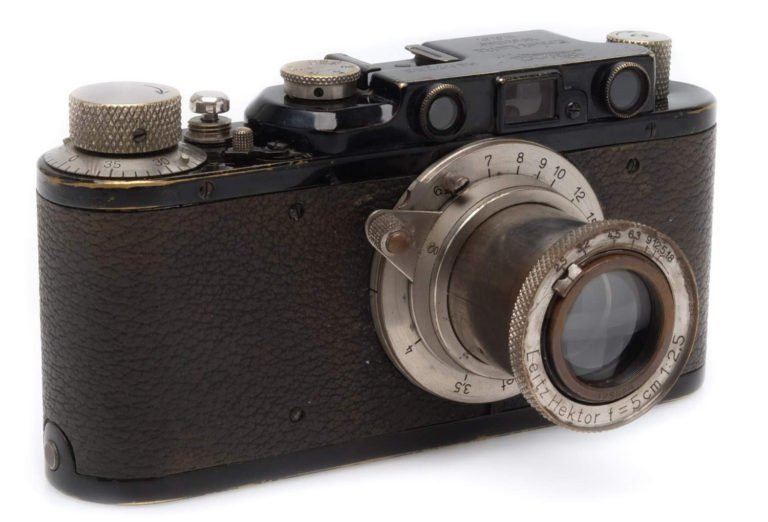 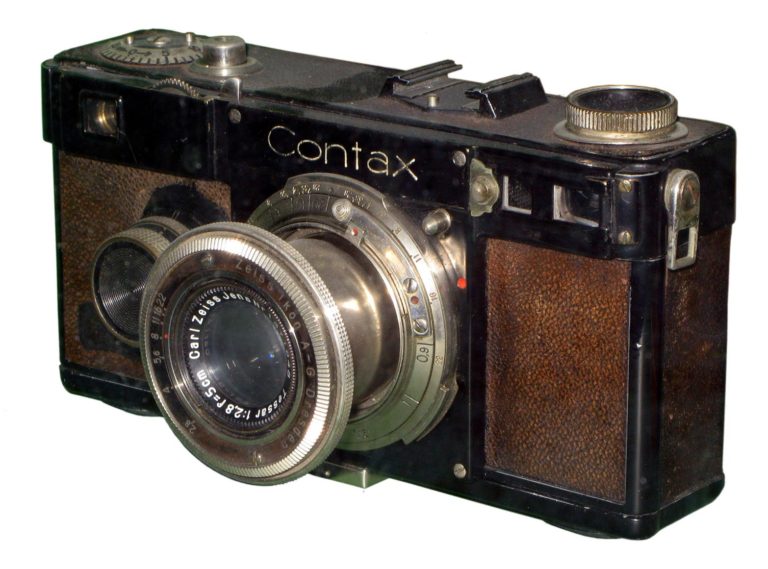 Eager to unearth the secrets of its inner-workings, Yoshida de-assembled the
Leica and was thoroughly underwhelmed: “I just disassembled the camera without any specific plan, but simply to take a look at each part. I found there were no special items like diamonds inside the camera. The parts were made from brass, aluminum, iron, and rubber. I was surprised that when these inexpensive materials were put together into a camera, it demanded an exorbitant price. This made me angry”.

His discovery inspired him to investigate further and in 1933, he, along with his brother-in-law, Saburo Uchida (1899-1982) and another man, Takeo Maeda (1909-1977), formed the Precision Optical Instruments Laboratory, its purpose: to conduct further research into the mechanics of cameras. A year later, the result of their research was manifested in the form of the first Japanese made 35mm focal-plane shutter camera, The Kwanon, named after the Buddhist goddess of mercy.

The Kwanon was merely a prototype, but its successor the Hansa Canon was released in February 1936 (although there is some dispute about this date, with some claiming it was actually released in late 1935). The first high-quality 35mm rangefinder camera to be designed and produced in Japan, the Hansa Canon was based on the Kwanon, and was sold exclusively by Tokyo’s Omiya Shashin Yohin Co. Ltd. (Omiya camera and accessory shop). Hansa was the store’s trademark.

Precision Optical Instruments Laboratory lacked the means to produce some of the essential components of a camera, specifically lenses and rangefinders, so instead turned to Nippon Kogaku Kogyo, who was, at the time, Japan’s largest optical equipment manufacturer, primarily specializing in the production of military equipment and were planning to enter the civilian market, in the form of high-grade lenses. Nippon produced the lens, its mount, viewfinder and rangefinder mechanisms, with the Precision Optical industry laboratory responsible for the main camera body, including the focal-plane – shutter and rangefinder cover. Somewhat ironically, Nippon Kogaku Kogyo would later become Nikon Corporation, who remains one of Canon’s main competitors.

– 10th August 1937 is Canon’s official founding date and Takeshi Mitarai, the first president, began with the ambitious mission of “Catching up and surpassing the Leica”.  The second world war would put a halt to much of Japan’s manufacturing due to the chaos that enveloped the country.

The Canon SII (left) and the IIB © Canon Inc.

In October 1946, Canon released the long-awaited SII, the first 35mm camera to feature a combined viewfinder/rangefinder and in 1949 they released its successor, the IIB which included a three-way optical viewfinder, matched by interchangeable lenses.

The innovative design of both the SII and IIB greatly enhanced the companies reputation to such an extent that during this period, Canon cameras were viewed as being equal to those made by the previously peerless Leica. That was until 1954 when the German manufacturer debuted its M3 model, a 35mm rangefinder camera with a remarkably clear viewfinder and a rangefinder near-perfect accuracy.

The release of the M3 marked a pivotal moment in the history of camera production and indeed in the history of photography as a whole. Rather than try to develop a direct competitor to the M3, Canon, Nikon, and some of the other Japanese camera makers instead focused their attention elsewhere, specifically to the development of single-lens reflex (SLR) cameras.

SLR cameras had been in existence in some form since the late nineteenth century and typically combined a mirror and prism-system, presenting the photographer with a more accurate image than that of a rangefinder camera. However, up until that point, they were usually onerous and complicated to use, which hindered their popularity considerably.

A magazine advertisement for the Canonflex, 1959 © Canon Inc.

May 1959 saw Canon release the Canonflex, 35mm SLR, which contained numerous unique features, notably, on its base, a wind-on lever which aided rapid shutter-release. Its production only lasted for a year when it was usurped by the Canonflex R2000, but, along with a number of other Japanese made cameras released around the same time, including the iconic Nikon F, it played a significant role in the dominance of SLR cameras over the following 50 years.

1971 saw the debut of one of their most iconic cameras, the F1, their first legitimately professional level SLR camera. It was the first camera that allowed for full-aperture metering and was designated the official 35mm camera for the 1976 Montreal Olympics and the 1980 Winter Olympics in Lake Placid, USA, a pivotal moment for Canon, a brand now so synonymous with sports photography.

In late 1973 the first Auto Exposure SLR camera, the EF was released and then in April 1976, the world’s first microcomputer-controlled camera, the AE-1. Like it’s predecessor, it became a hugely popular camera for professional users, for whom it was designed, and in 1984, it was assigned the official 35mm camera of the Los Angeles Olympic Games.

In March 1987, in conjunction with their 50th anniversary, Canon debuted its EOS (Electro-Optical System) line in the form of the EOS 650, an autofocus SLR camera designed to rival the Minolta A-9000 and the Nikon F-501 released in 1985 and 86 respectively. They had previously produced an autofocus SLR in 1985 in the form of the T80, but its performance failed to rival that of its hugely popular competitors, and its production only lasted for just over a year.

The EOS 650, incorporated a microprocessor, a super high precision (ultrasonic) motor, and a highly sensitive base stored image sensor. As with the F-1 and New F-1, its high-quality performance made it popular amongst professional photographers, particularly those capturing live sports.

With a development goal of creating an even faster and more accurate AF mechanism, as well as high-speed continuous shooting and reliability, in 2000, they released the EOS-1V. It could shoot up to 9 frames per second, had a further refined version of the 45 point autofocus system, and a unique curved body design. This combination of form and function saw the camera win the Grand Prix at the Photo-Journalists Club’s 17th Annual Camera Grand Prix. 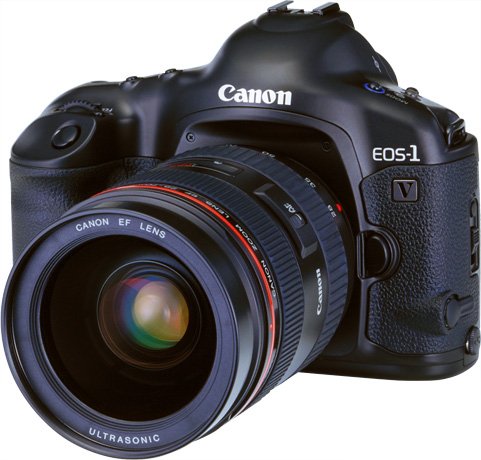 The late 90s and early 2000s saw dramatic advancements in the technology behind digital and video cameras in line with which, Canon continued developing both formats. The summer of 2000, saw Canon debut the EOS D30, their first DSLR entirely designed and built in house. Although they had previously released two DSLR’s, in the late 1990s, the Canon EOS D2000 and the EOS D6000, were compiled of Canon camera bodies with Kodak digital backs, as part of a contract between the two companies.

Up until that point, SLR cameras were used almost exclusively by professional photographers, predominantly due to their expensive prices,  and digital SLRs were usually large and cumbersome. The EOS D30, as well as being both the smallest and lightest DSLR on the market, was easy to use, possessing features such as fully automatic mode, a 35-zone evaluative metering feature, and a built-in E-TTL auto-flash, making it easy to capture natural and clear images, regardless of the conditions.

The foundation for the success of their DSLRs was Canon’s newly developed CMOS technology, which utilized large-area, high-sensitivity, CMOS image sensors. CMOS technology allowed for power usage and cost performance, but had previously experienced issues, such as low resolutions and susceptibility to noise, issues all but eliminated by Canon, allowing for high-quality images to be captured even at long exposure and high ISO sensitivity.

During the early 2000s Canon continued to improve its AF lenses and the production of its Powershot series. 2005, saw the release of the iconic EOS 5D, the first full-frame DSLR camera with a standard-sized body, similar to that of a 35mm SLR, and in November of 2008, the same year that the company produced its 500 millionth SLR camera unit, Canon launched the first DSLR with full HD video recording capability, the EOS 5D Mark II.

The result of their development of a 35mm full-size CMOS image sensor with its own high-speed signal readout circuit, the cameras brilliance was recognized in the form of numerous awards including, Camera of the Year at the Camera Grand Prix 2009; and the EISA European Advanced Camera Award 2009–10.

Canon continues to push boundaries in their pursuit of perfection. In June 2015, they debuted two models, the EOS 5DS and the EOS 5DS R, both of which have a pixel count of 50 megapixels, along with an approximately 50.6-million-pixel 35mm full-frame CMOS sensor, and Dual DIGIC 6 image processors that afford continuous shooting of up to approximately 5.0 frames per second and a maximum standard ISO of 6400.

Manufacturing quality-built cameras in a process of constant adaptation and continuous evolution for over 80 years, Canon has become a top choice of photographers ranging from amateurs: mothers, fathers (and kids) up to the highest-paid professionals in the business.