Cuba, the “Pearl of the Antilles,” a small country with a complicated backstory. Artists of all disciplines have been drawn to its shores. Famously the home to Ernest Hemingway, who wrote his Pulitzer Prize-winning novel The Old Man And The Sea whilst a resident of Havana; Sartre and Simone De Beauvoir were also inspired by this spirited nation with all its idealism and fervour.

Cuba has seen much change in the last century, known for its revolution, and later its poverty. However the Cuban life force prevails through all adversity, and it is remembered foremost as a vibrant isle; warm, vivid, spirited. These photographs paint a portrait of a steadfast nation, unpredictable from one moment to the next. 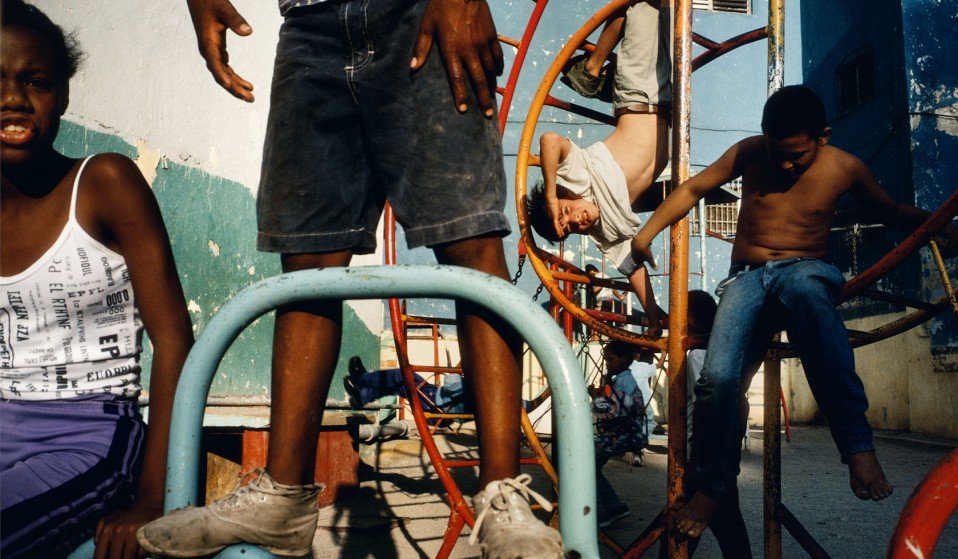 Alex Webb’s images of “the violet isle”, a nickname for Cuba inspired by the rich colour of its soil, presents an engaging multi-layered portrait of the vibrant land. Webb offers an intriguing vision inspired by Cuba’s existence over the last fifty years in an economic, political, cultural and ecological bubble virtually untouched by the rest of the world. Webb’s unique aesthetic is immediately recognisable, sparking many imitations, but always unmatched. 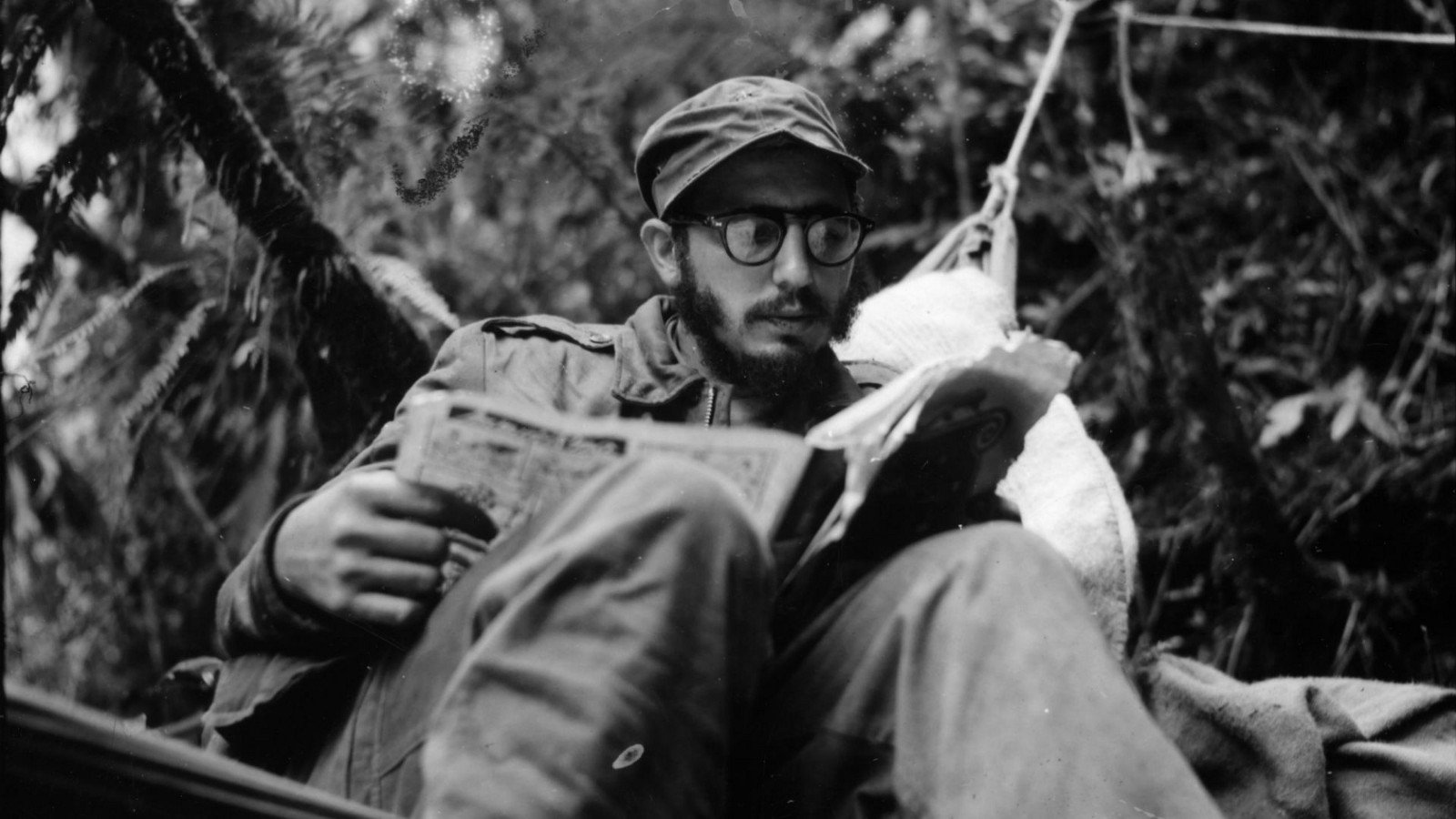 Spanish photographer Enrique Meneses had the rare privilege of photographing the Cuban revolution as it was unfolding in the Sierra Maestra. We’ve all seen the images of the triumphant revolutionary leaders celebrating their victory amongst the crowds of Havana, but these images from fields are much less seen.

In this photo, a young Fidel Castro “the Robin Hood of the Sierra”, takes a moment to read the news from the capital on a break from frequent outbursts of fighting that took place in the mountain range at the time. The lush Sierra Maestra mountain range served as permanent headquarters for the war against Batista and was the ultimate guerilla base with its rich greenery and heavy foliage. 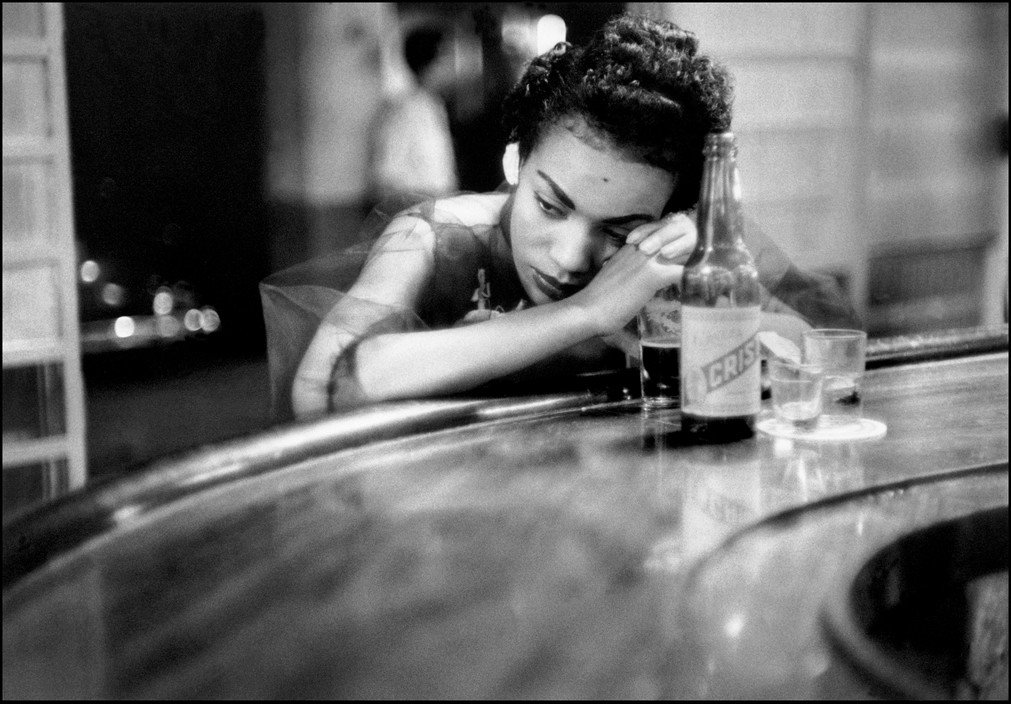 Studying for a short period in the 1940’s under the tutelage of Richard Avedon, Eve Arnold’s determination and talent led her to become the first female member of Magnum Photos agency. She is now remembered for her intimate shots of celebrities such as Marilyn Monroe, but Arnold also chronicled the lives of the poor and the dispossessed, travelling to Cuba, Afghanistan and Russia on assignment. In this photo Arnold was able to capture the quiet solitude of this woman, who radiates a star quality despite being someone who was no doubt living a hard, poverty-stricken life. 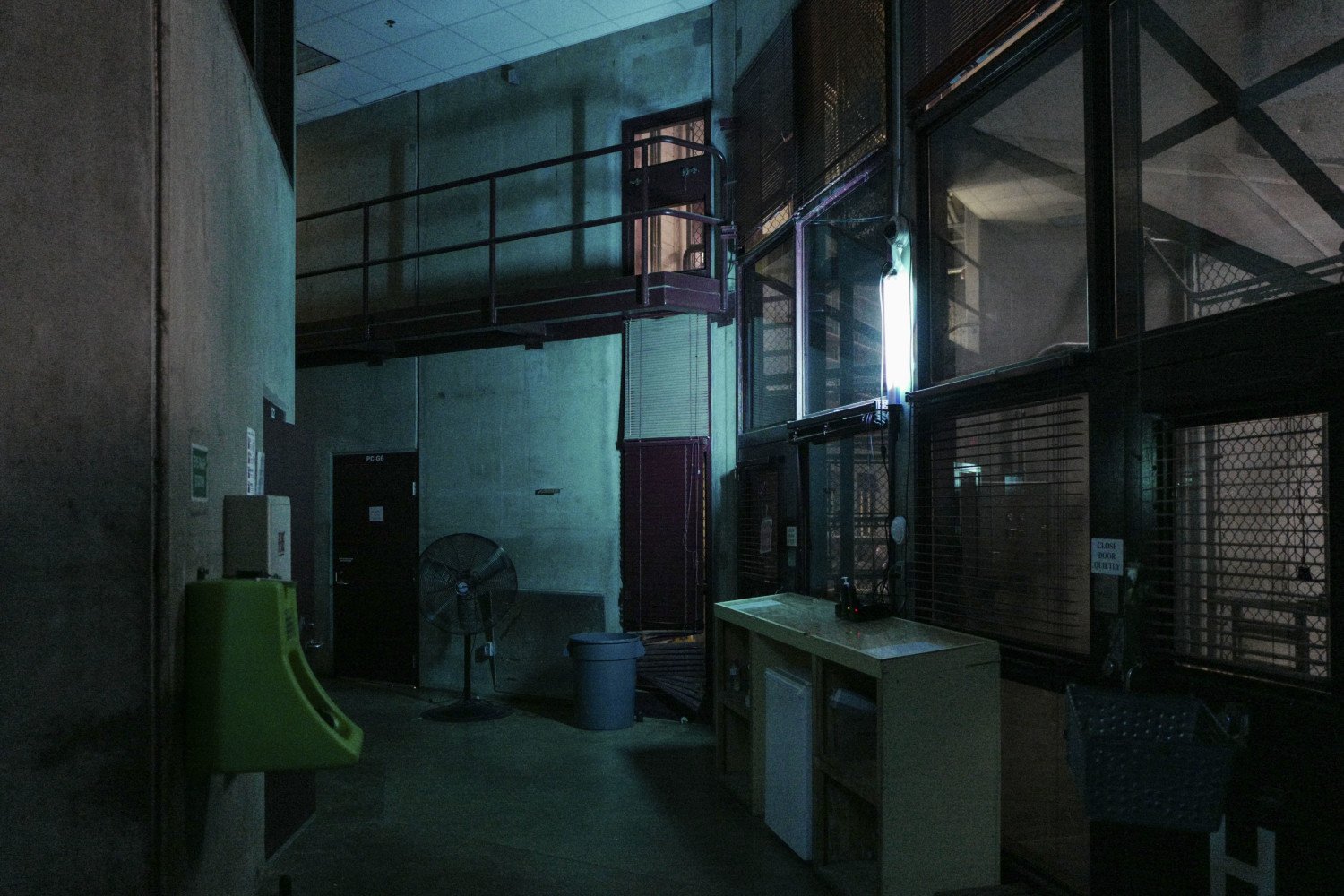 Guantanamo Bay is the most notorious and high-security military prison in the world, home to 40 detainees accused of crimes against the US. Established under the George W. Bush administration in 2002, President Obama pledged to close the camp during his time in office but was unsuccessful in doing so.

In January 2018 President Trump signed an executive order to keep the camp open indefinitely. The camp has been accused of using torture methods to retrieve information from detainees and is widely considered to be in violation of human rights laws by several human rights organisations. Peter Van Agtmael has been one of the very few photographers allowed to enter and document the prison. Instead of documenting the prisoners, his focus lies on the anonymity and ghostliness of the institution. 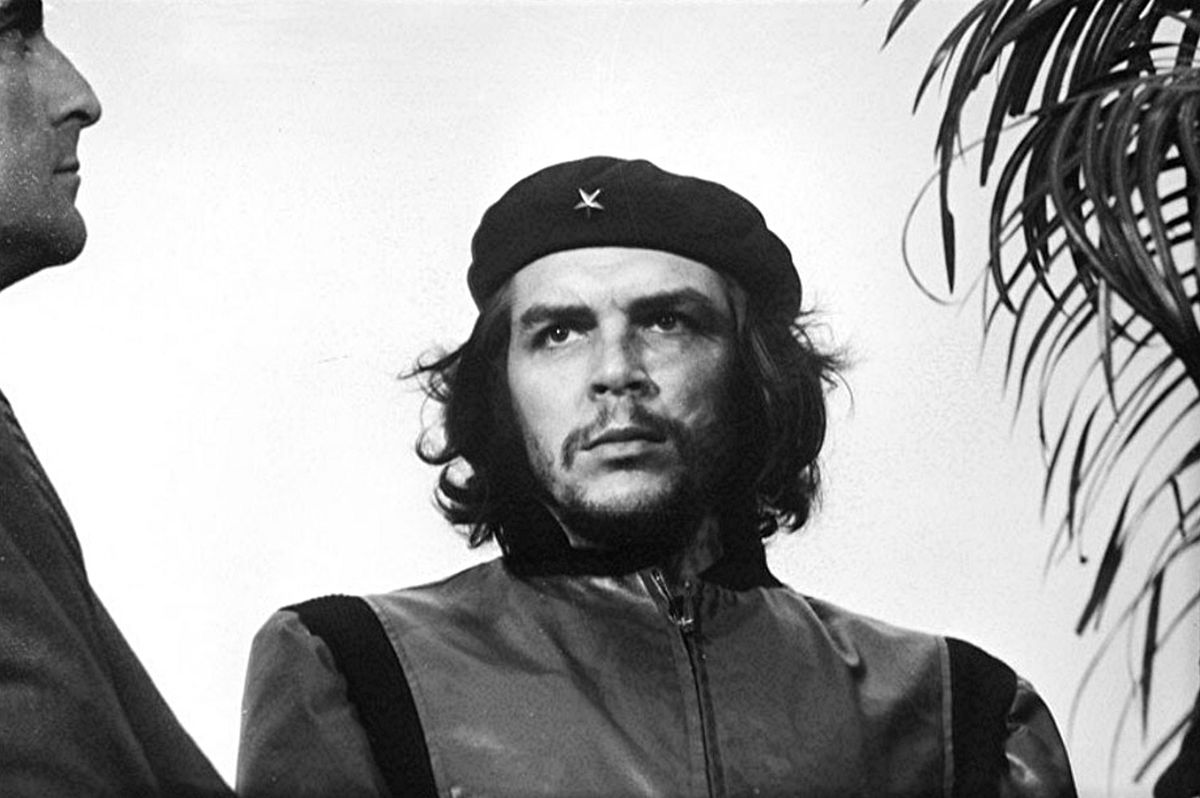 No photo is more recognisable than this one by Alberto Korda, a fashion photographer whose image of Ernesto ‘Che’ Guevara has become so prominent as an anti capitalist symbol that it is said to have been the most reproduced image in history, more so than the Mona Lisa or Marilyn Monroe with her skirts flying.

From Latin America to Vietnam to South Africa and the U.S.S.R. Che’s face became a household icon for social activism, littering dormitory walls and emblazoned on flags and protest signs. However, this image also teaches us a great lesson about commodification and globalization. Korda’s photograph no longer holds the same power it did in the mid-twentieth century. Once a symbol of a society struggling toward the ultimate abolishment of capital and inequality, Korda’s Che has now been converted into its own form of capitalist currency: a cool knickknack or keyring, a pin or poster or touristy T-shirt. 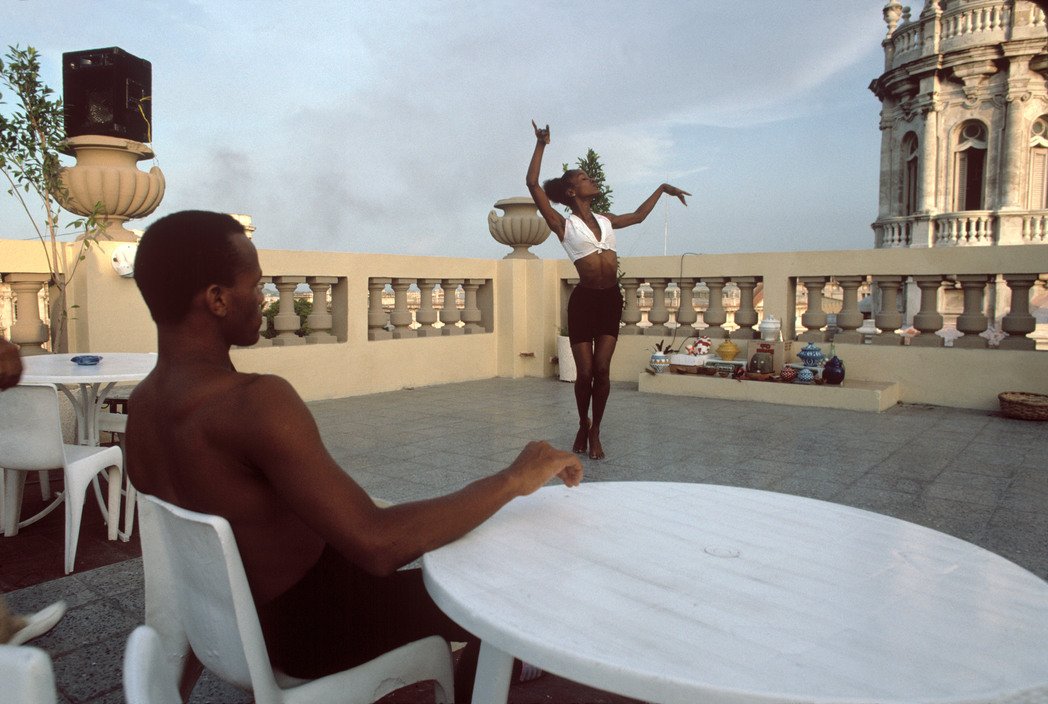 Rene Burri’s most famous photo is the iconic image of a pensive Che Guevara in his office, biting down on a cigar. Burri described the famous meeting as a Cock Fight, saying “Guevara stomped around in his office like a caged tiger.” However, Burri’s work in Cuba was more extensive than his meeting with the leaders of the revolution.

His pictures captured all facets of life, from the building of the Berlin Wall to JFK’s funeral. In this iconic image, a woman dances barefoot on a terrace at sundown, whilst a man watches. It captures the heat of the evening, and the freedom and love of music that we so often associate with Cuba. 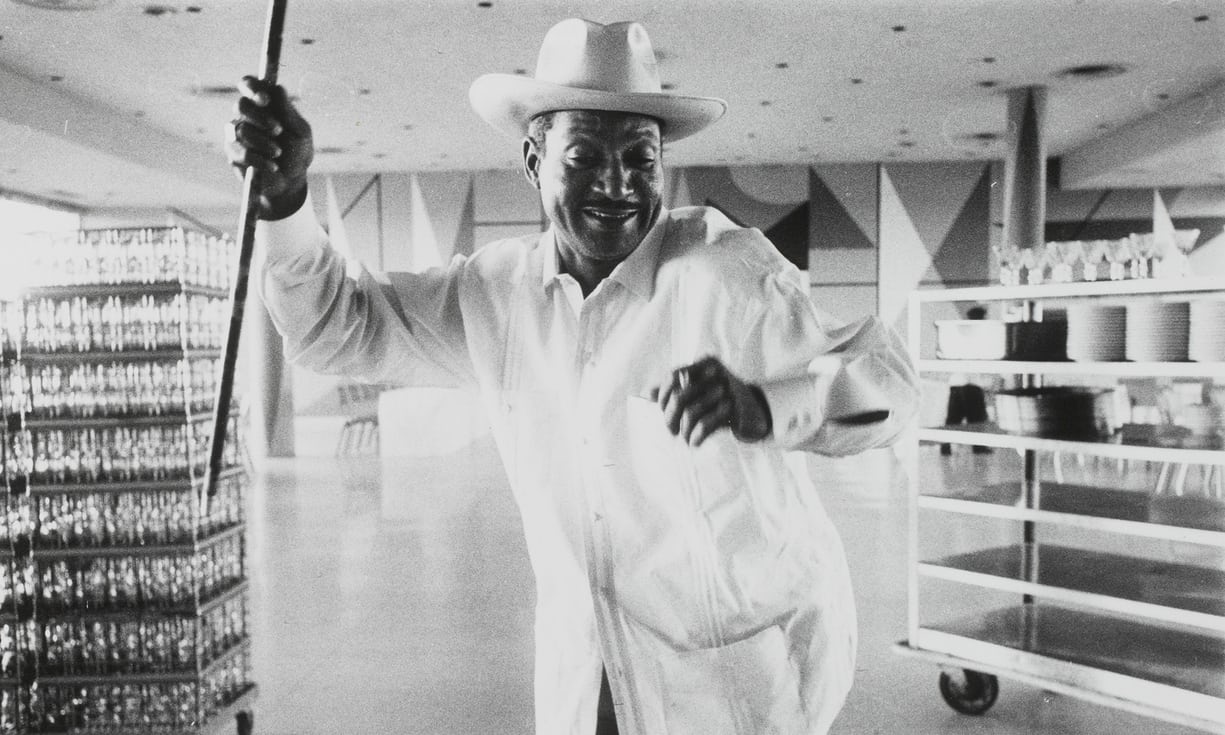 “When you’re in a place, what you’re doing can’t be confused for anywhere else – it should be an indication of the country and the epoch,” – Agnès Varda

Part of a series of photographs shot during the making of Varda’s essay film “Salut Les Cubains” (Hello Cubans) In this frame we see Benny “El Rey” Moré, a beloved Cuban tenor, do an impromptu performance for Varda amongst restaurant carts.

It perfectly encapsulates the Cuban love of music and dancing that Varda had set out to capture in her film, and its energy still fizzles today. This image serves as a relic of a fervent, joyous nation. Her reason for making her film from still images was inspired by the French artist and filmmaker Chris Marker, but was also to avoid lugging around 16mm equipment and dealing with bad sound. 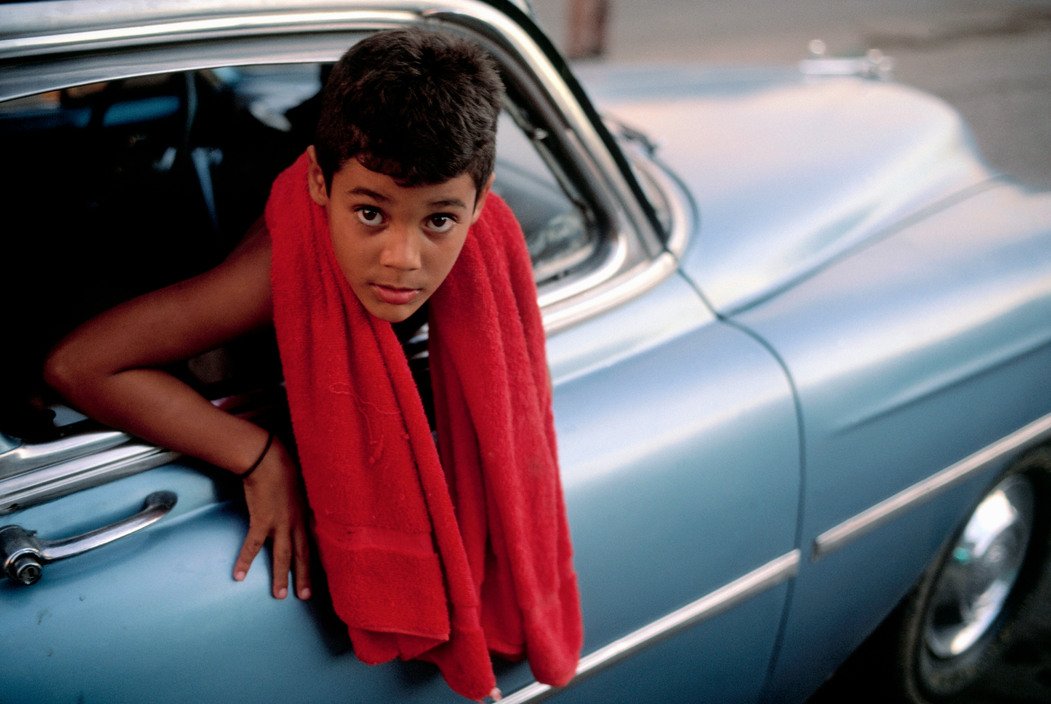 Commissioned by National Geographic in the 90’s, “Cuba: Island at a Crossroad”  has become hugely famous, pulsing with the national spirit of a nation in transit. In perhaps the most memorable image from the series, which was to become a cover image for the June 1999 issue of te magazine, a young boy leans out from the window of a Chevy, and gazes into Harvey’s lens inquisitively. The series offered a fresh and modern perspective on Cuba, in all its vivacity.

“One thing that really does need to be made clear is that there isn’t abject poverty in Cuba,” Harvey said. “You’re not going to find people sleeping in the streets or kids that look malnourished. But they don’t have a lot of material possessions, and there is a lot of inconvenience—standing in line is what you do in Cuba for everything.” 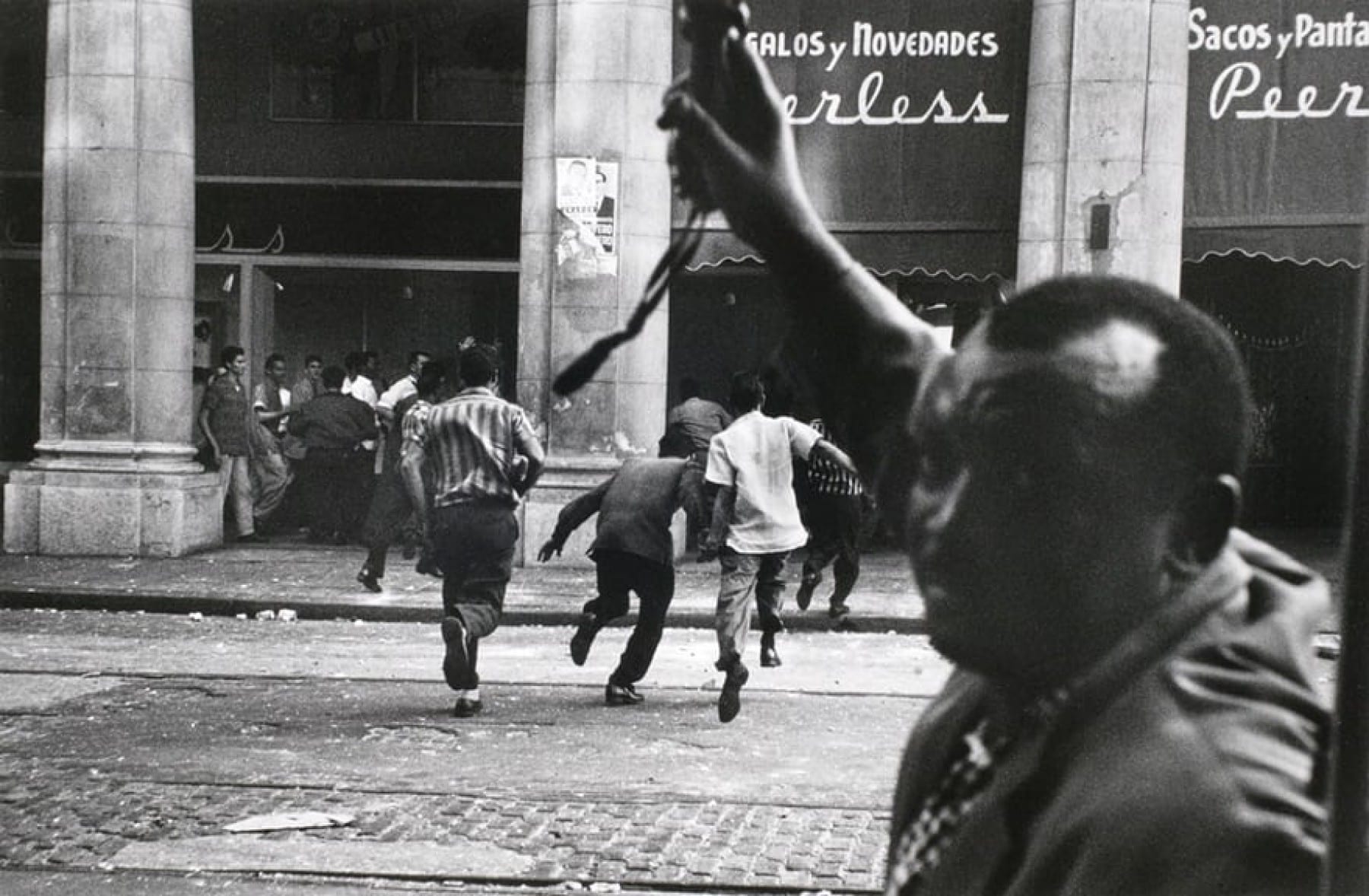 9. Burt Glinn – Civilians taking control of the streets before Castro’s people arrived from the hills, 1959

Burt Glinn is a master of seizing the moment. As he was celebrating New Years Eve at a party in New York in 1958, whispers were going around that Fulgencio Batista, the US-backed dictator of Cuba was making preparations to flee Havana because Castro’s revolutionary army were advancing on the city. Glinn immediately took his chance to be part of history and borrowed some money from Magnum president Cornell Capa, scooped up his camera and raced to the airport, just in time to make a last flight.

By the time he arrived, Batista had already escaped; as Glinn said, “you just can’t hail a taxi and ask the cabbie to take you to the revolution.” But he was still in time to capture some of the most defining moments of the revolution as they unraveled in Havana, and his historic document Cuba 1959 plays out like a thriller. 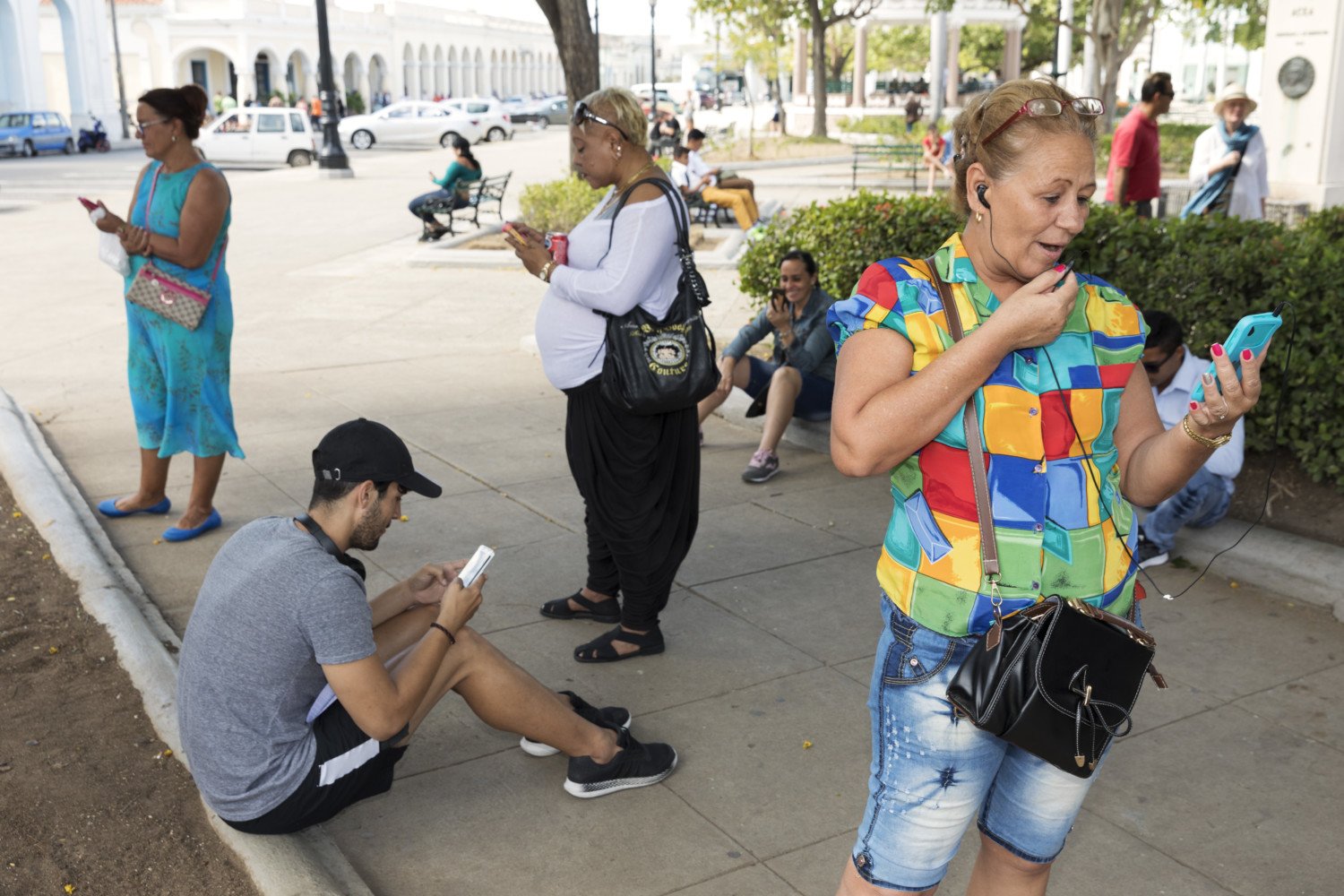 The internet in Cuba was unavailable to the general public until fairly recently. Available mainly to the few who could afford it (a irony under communism) this was due to government restrictions and the US embargo. The situation slowly began to change in 2007 but it was not until 2015 that the Cuban government opened the first public wifi spots.

Since January 2018, there are now public hotspots in around 500 locations nationwide, connecting Cuba to the rest of the world. British photographer Martin Parr documents here what he calls “the second revolution” an image we are more than used to as we enter train carriages and public parks in our native countries. Cuba may have been one of the last places to have access to the web but this series shows a fast-changing landscape; a Cuba that we knew would eventually come to pass.