“By seeing London, I have seen as much of life as the world can show.”
– Samuel Johnson

Few cities conjure up such an array of evocative yet paradoxical imagery as London, a proud and eccentric city brimming with a myriad of cultures, and one, which over the years, has drawn some of photography’s greatest to its storied streets. 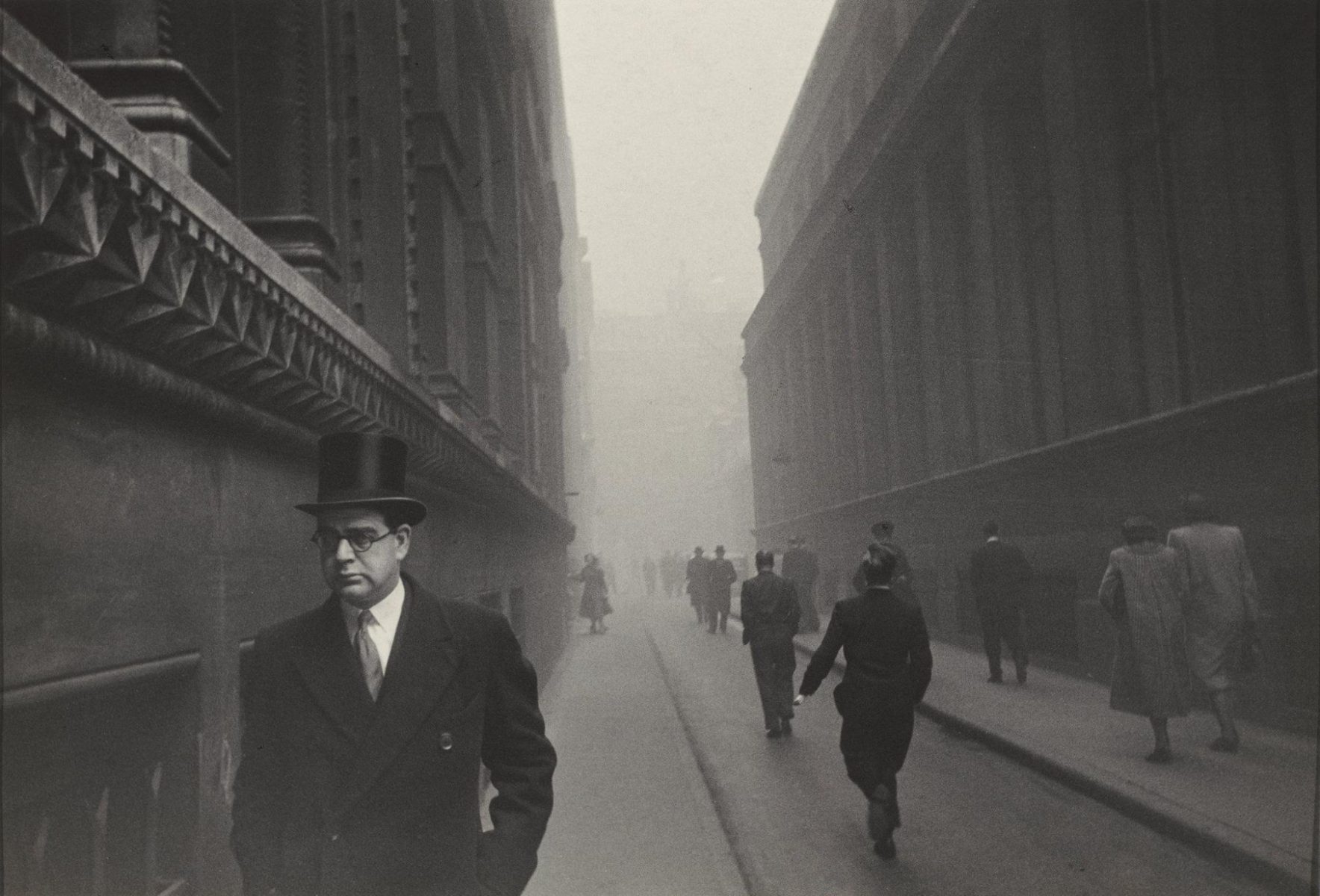 “…London was black, white, and gray, the elegance, the style, all present in front of always changing fog… ” – Robert Frank

Swiss-born photographer Frank visited London several times during the early 1950s, bringing with him his trusty Leica which he used to capture the contradictions of a city in which wealth and extreme poverty coexisted in restless juxtaposition.

His depiction of suited traders, walking hurriedly beneath the shadowed profiles of monolithic buildings in London’s financial district, permeates with an edgy, cinematic intensity, which, along with the granular aesthetic, typifies the intuitive style for which he would later become renowned, following his defining 1959 series ‘The Americans’, which dramatically altered the course of documentary photography thereafter. 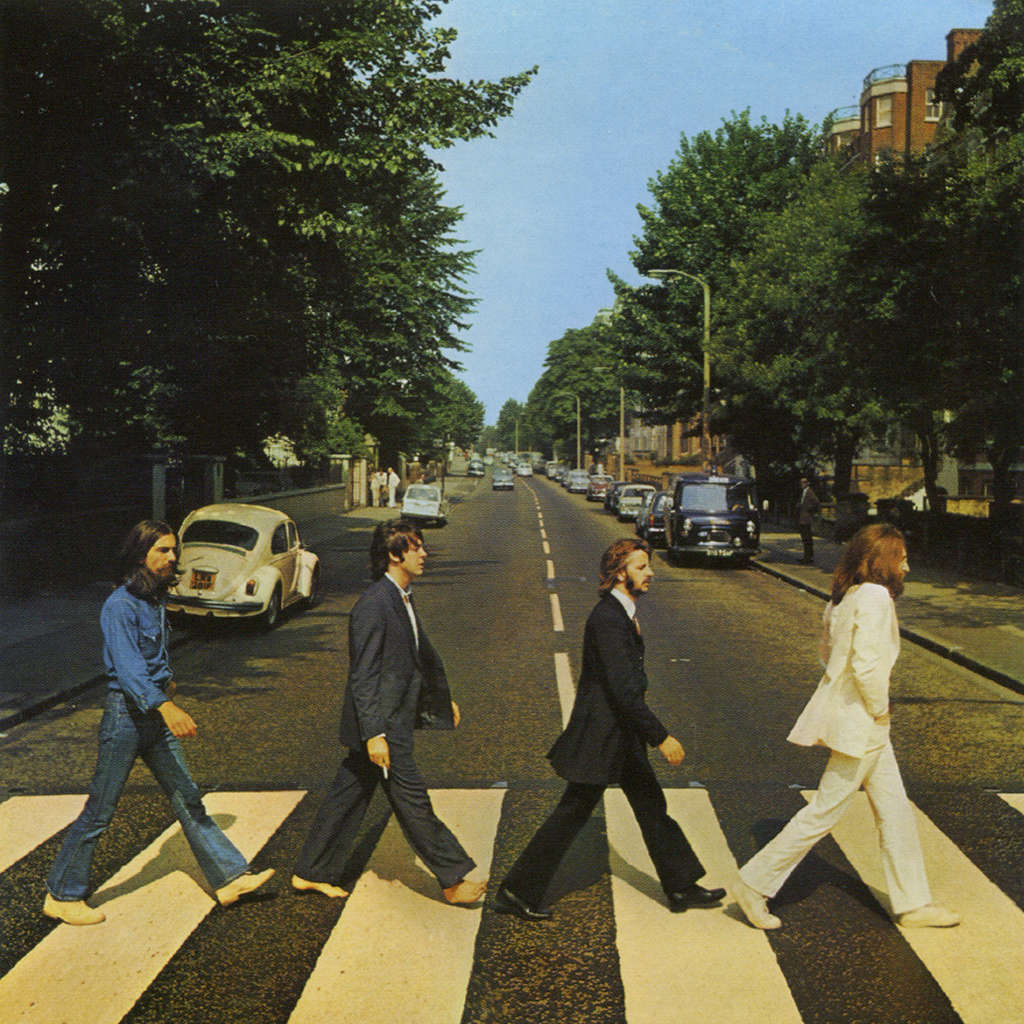 Undoubtedly one of the most iconic images in music history, Scottish photographer Iain Macmillan captured John, Paul, George, and Ringo from atop a stepladder, for the cover of their eleventh studio album; and, in the process, forever immortalized an unassuming street in North West London. 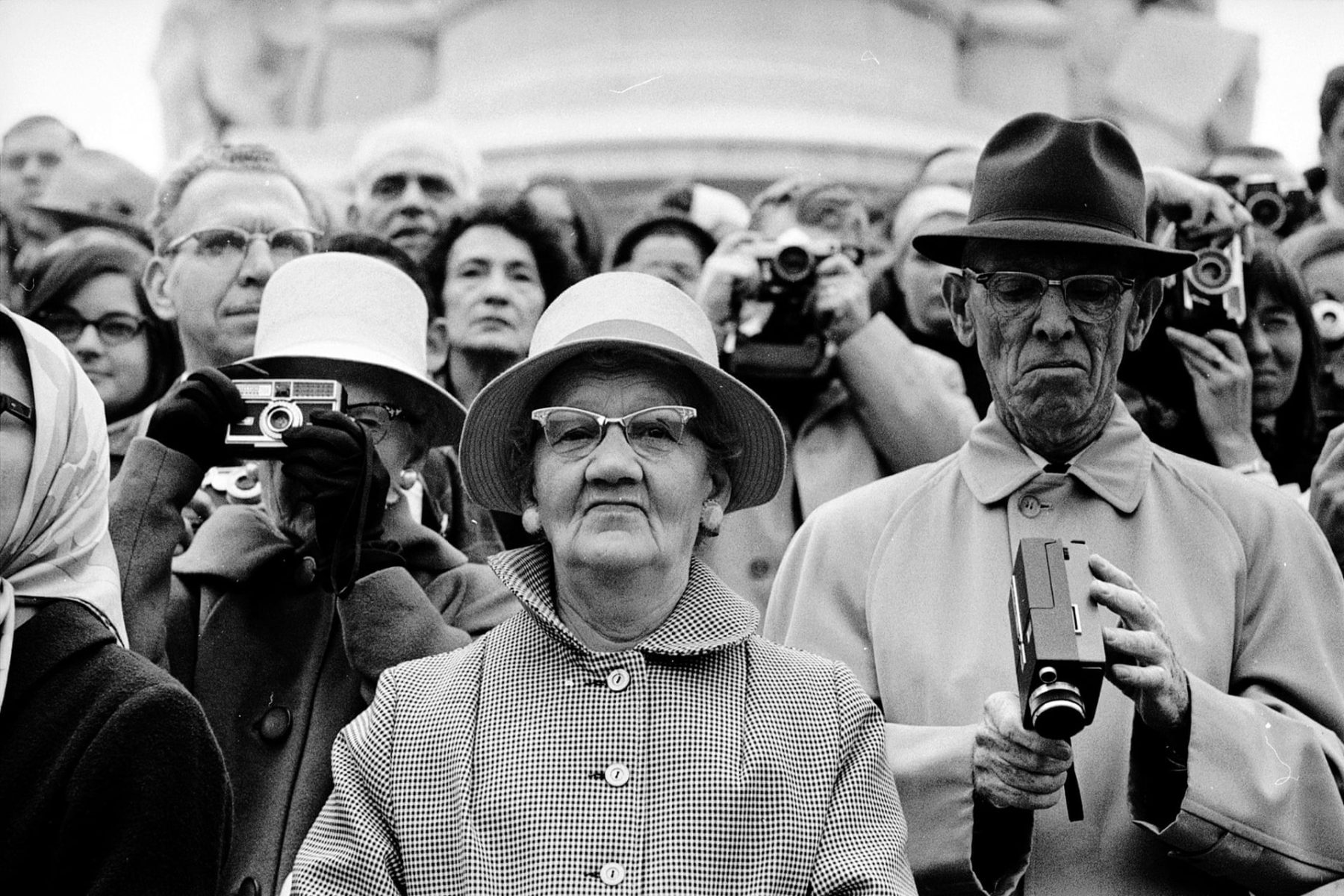 Deemed ‘a kind of English Cartier Bresson’ by Lord Snowdon, Jane Bown is one of Britain’s greatest ever photographers. A master of portraiture, with a profound understanding of light, her insightful and unobtrusive approach mirrored her modest temperament and allowed her to capture subjects with a rare candor, exemplified in her 1968 portrayal of some of London’s ubiquitous American visitors. 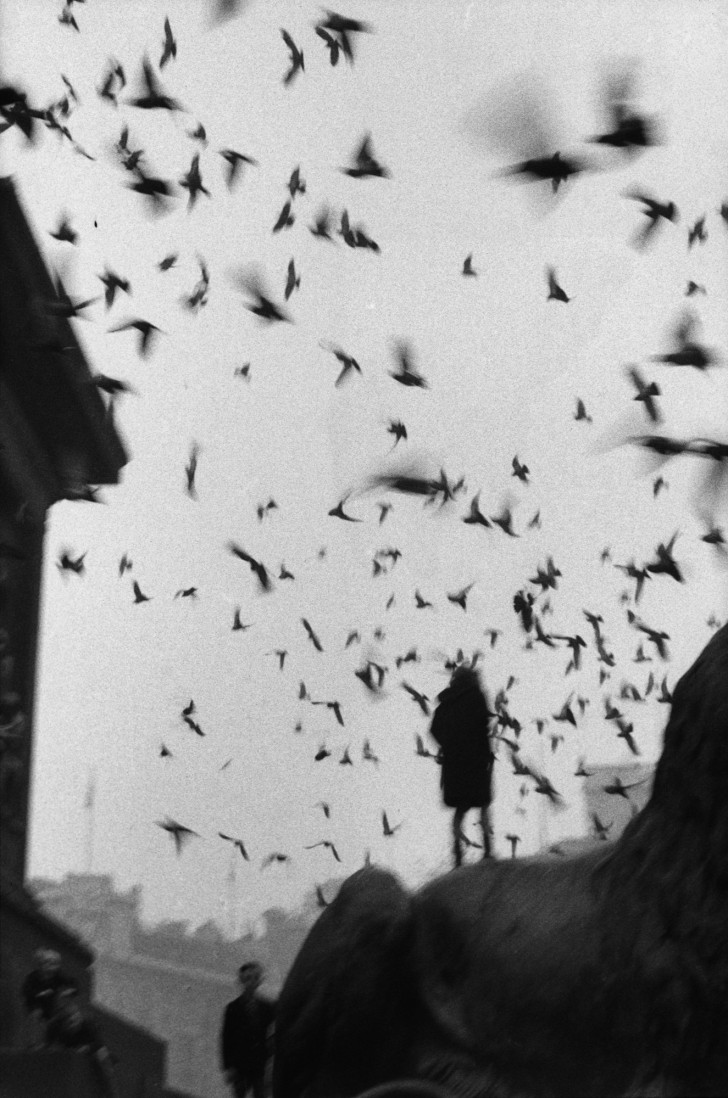 Sergio Larrain was truly a remarkable photographer, a master of light who portrayed fleeting moments of beauty with a delicate balance of grace and spontaneity.  His depiction of dispersing pigeons in Trafalgar Square exemplifies these sensibilities exquisitely; a seemingly quotidian scene assumes a poetic ambiance when viewed through his lens.

Part of a series commissioned by the British Council in 1958, it led to his recognition by Henri-Cartier Bresson, who subsequently signed him to the Magnum Agency. However, in the early 1970s, following an encounter with Bolivian mystic Oscar Ichazo, the enigmatic Chilean abandoned his camera and dedicated himself to a reclusive life of meditative and spiritual practices thereafter. 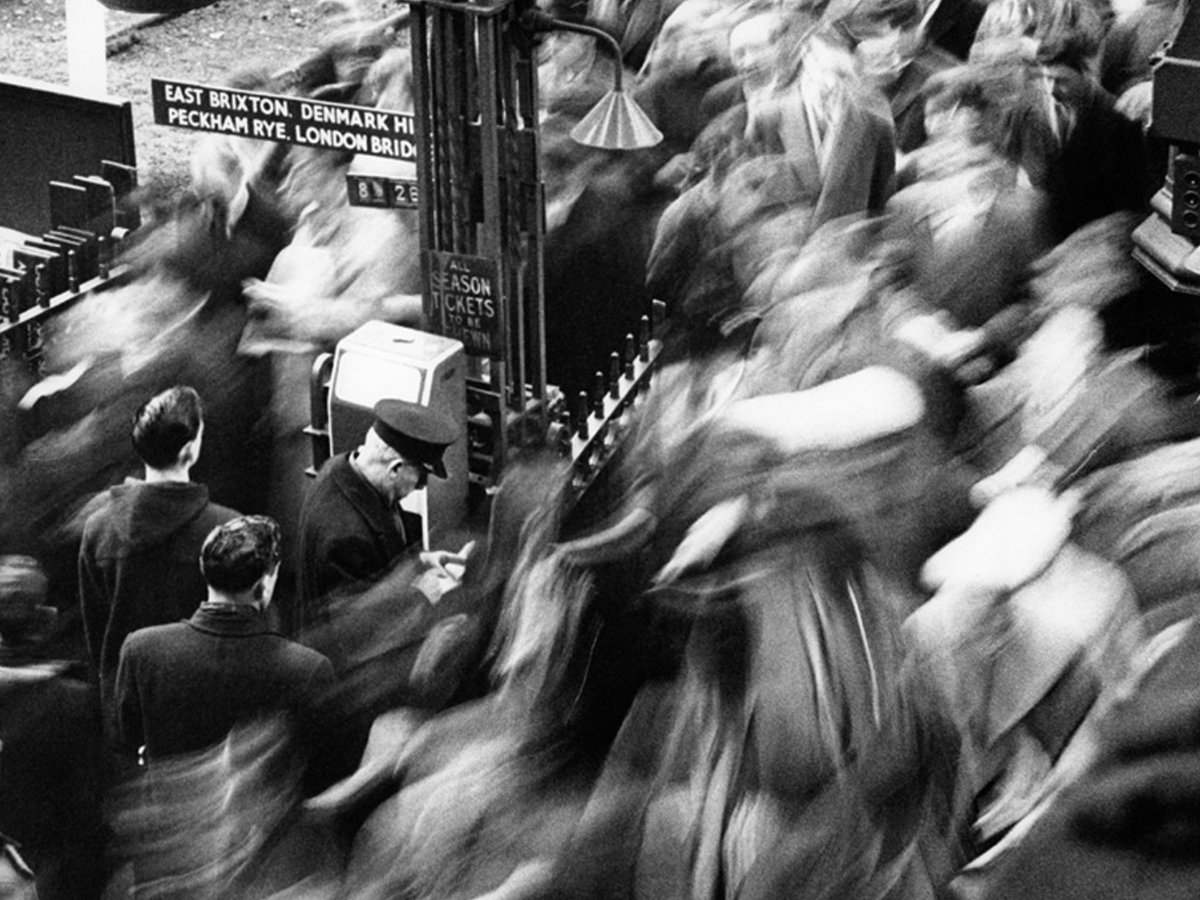 © Estate of Bob Collins/Museum of London

Although perhaps best known for his intimate portraits of acclaimed musicians and artists, Bob Collins was, at his core a street photographer, who spent much of his time wandering the streets of his home city capturing scenes of everyday life.

His portrayal of commuters at Victoria Train Station is a remarkable one, permeated with an expressive dynamism that conveys the essence of the scene brilliantly, and one which, although captured some sixty years ago, continues to resonate with those who traverse London’s busy stations during rush hour. 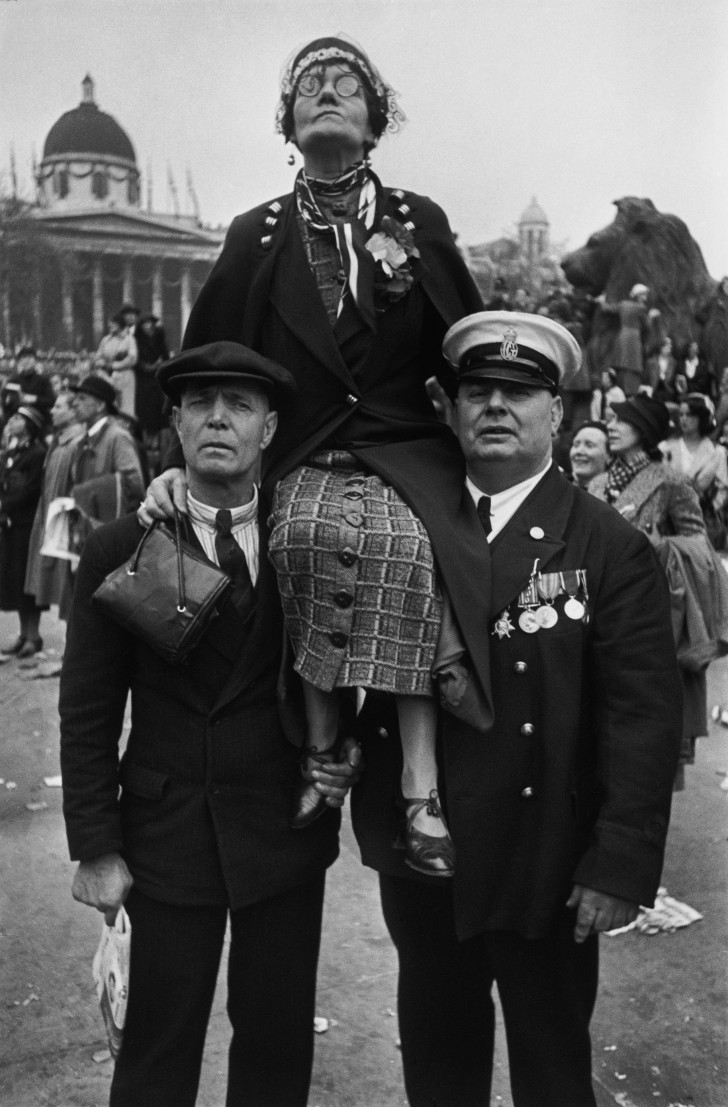 It is a testament both to the prolifically of Henri Cartier Bresson and to his remarkable virtuosity, that so many of the greatest images from cities across the world were captured by his lens. One of his series of portraits made during the coronation of King George VI in 1937, Bresson, as was typical of his approach, ignored the actual crowning, instead focusing on the ardent faces of the spectators in attendance, capturing here, a quintessential snapshot of British patriotism with a humour and skill that typifies his work. 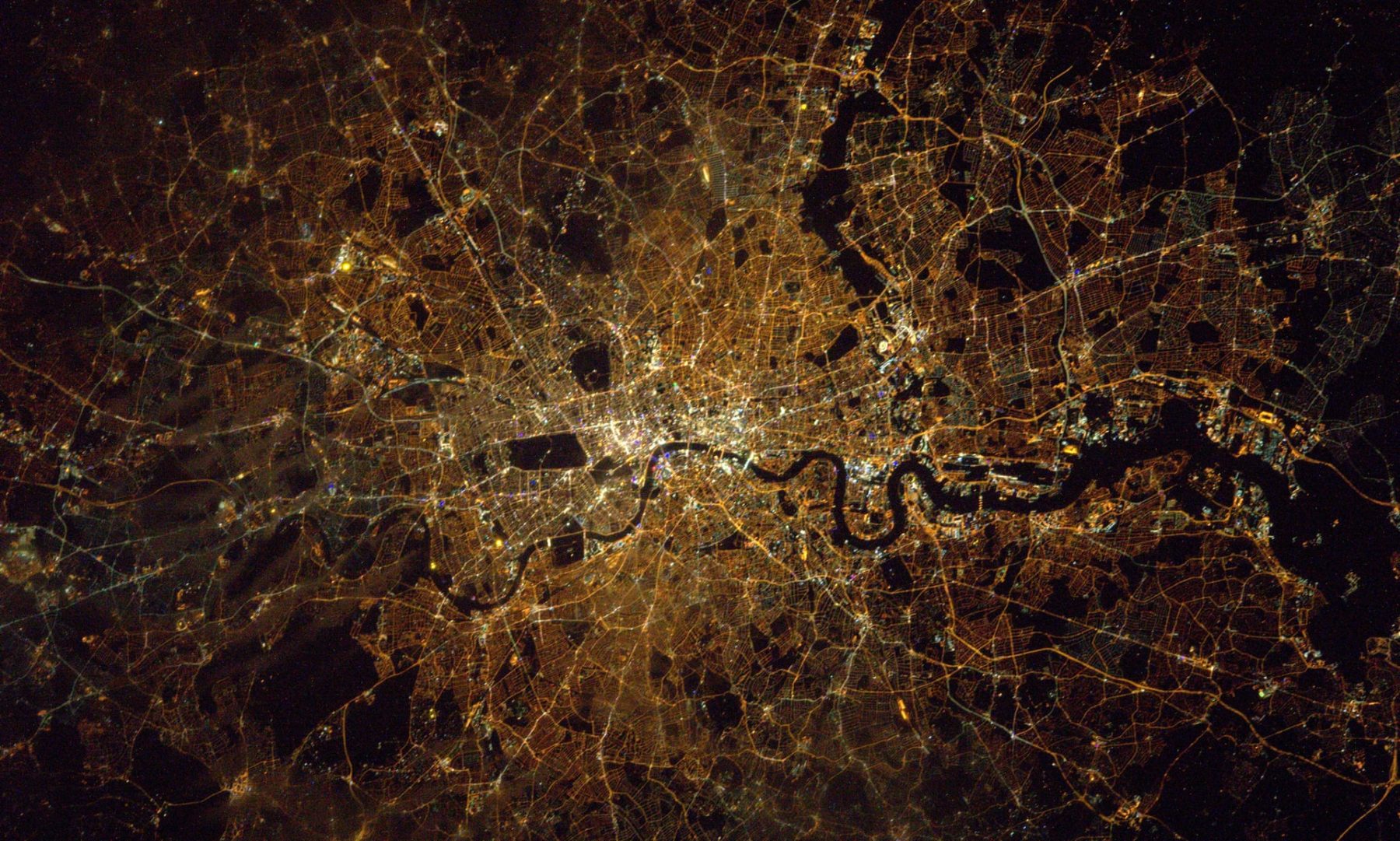 British Astronaut Tim Peak’s image of London taken from the international space station on midnight of 31st Jan 2016, presents the city from a rare aerial perspective. Seen from 400KM above, the myriad streets appear as strands of shimmering light which crescendo dramatically as they reach the center; a wonderful embodiment of the interconnected essentiality of the city.

Since its inception in the mid-1960s as a celebration of the city’s diversity and, as a means of promoting tolerance amongst the local community, Notting Hill Carnival, the annual two-day event held on the streets of West London, has been drawing crowds from across the globe.

Ian Berry’s iconic image captures members of the city’s police force dancing with revelers at the 1981 edition; a scene which encapsulates the unifying power of the event, and one since emulated numerous times to the extent where it is now regarded as somewhat of a tradition, although it belies the often tumultuous relationship between London’s police force and the carnival. 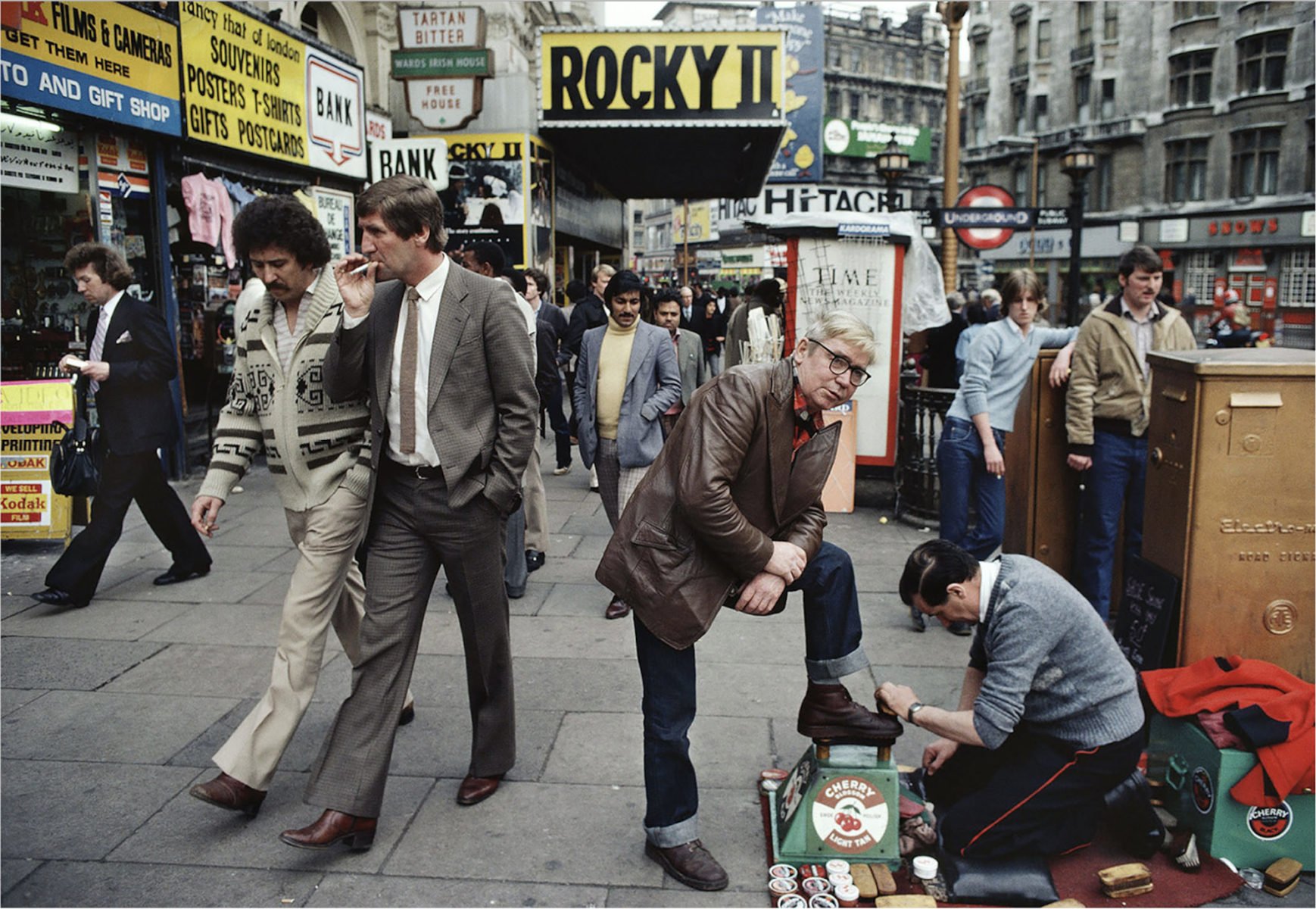 Renowned for his subversive approach to the medium, William Klein’s depiction of London’s Piccadilly at the turn of the 1980s is typically instinctive and multi-layered.  The exclusively male clientele perhaps attests to the then seedy composite of the area, and, along with the collage of brazen advertisements, creates a palpable sense of brash masculine energy that, in many ways, epitomizes the period. 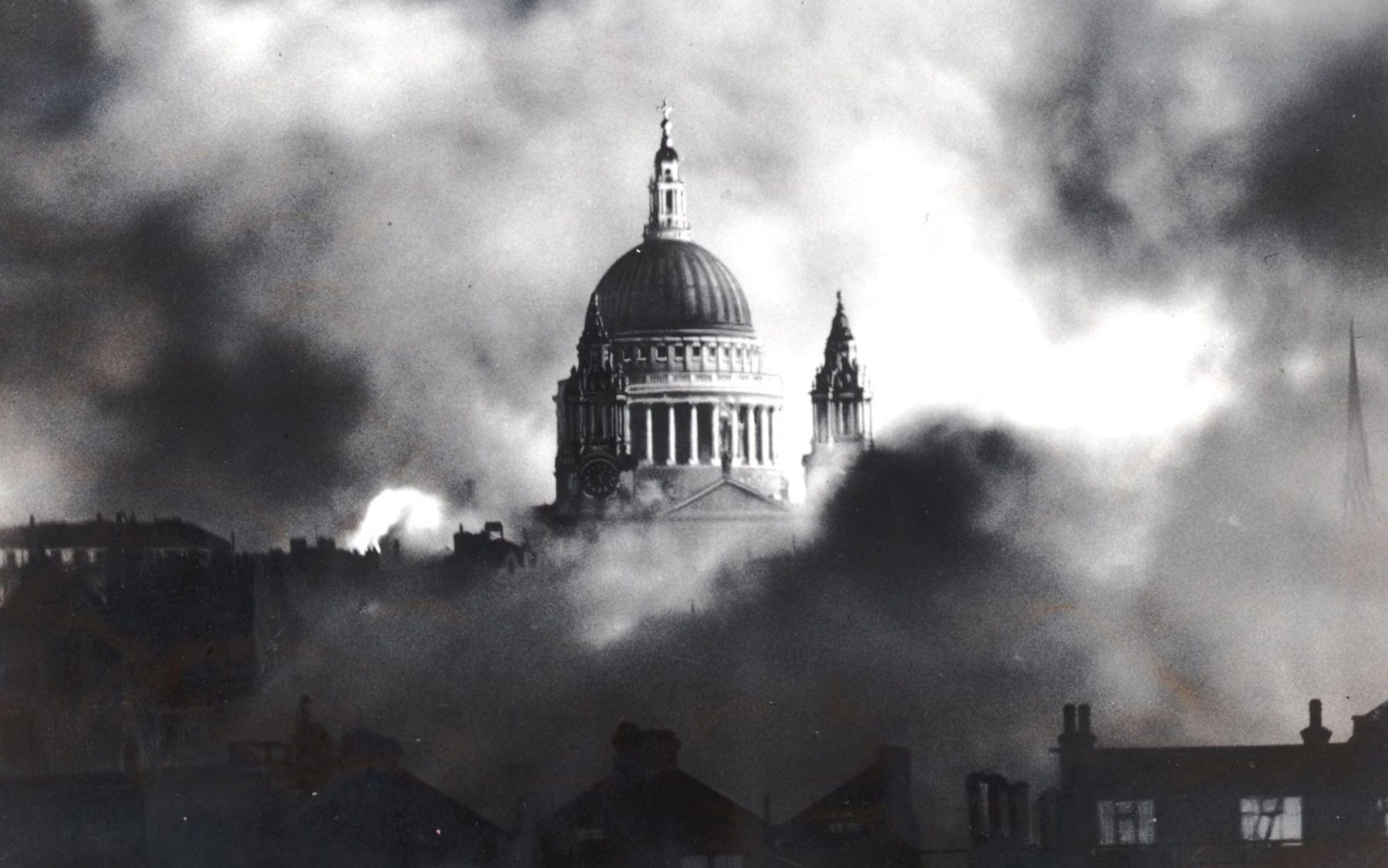 On the night of 29 December 1940, the German air force carried out the most violent of their 71 attacks on London (collectively known as the blitz), dropping 120 tons of explosives, and in the process, destroying hundreds of buildings, thus changing the face of the city forever.

Amidst the chaos, Daily Mail staff photographer Hebert Mason captured this image from the roof of the paper’s offices, as an ephemeral gust of wind parted the smoke revealing the looming shape of the iconic St Paul’s Cathedral, its domed roof and solitary cross illuminated dramatically by the hellish inferno. Observers, including Mason himself, believed they were witnessing the demise of what was, at the time, London’s most prominent edifice but it survived, and Mason’s masterpiece was published two days later (the delay due to the prudence of the government censors) under the headline: “War’s Greatest Picture; St Paul’s Stands Unharmed in the Midst of the Burning City”.

A defining photograph from the war, for those living in Britain at the time it became a symbol of the country’s resilience and remains one of the most iconic representations of London, ever made.