“Photography is a love affair with life.” – Burk Uzzle

Love is a theme that has been widely explored by artists throughout the ages, and photographers are no exception. Many of the greats were natural romantics dedicated to capturing moments of beauty amongst the ordinary. 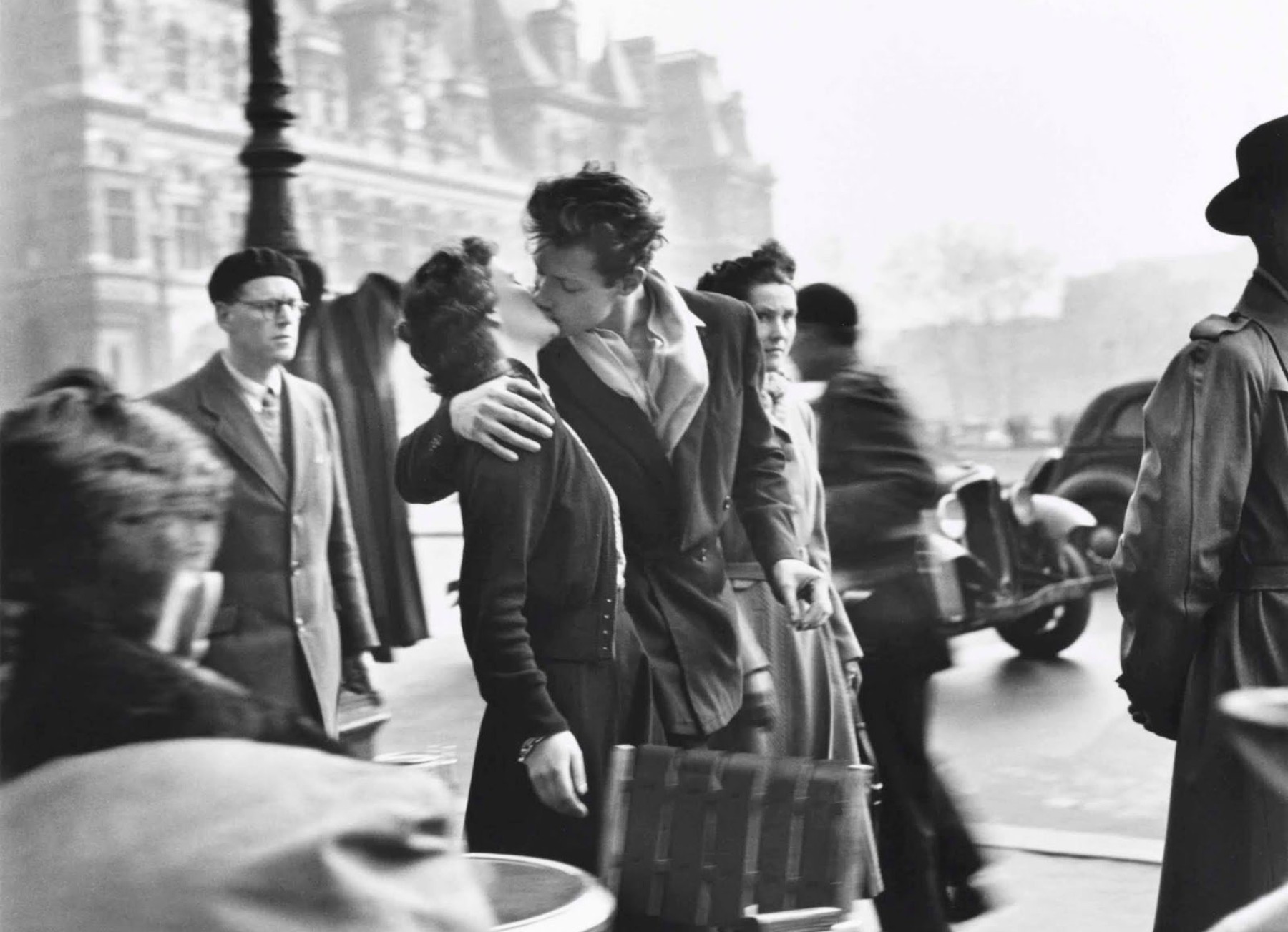 Few exemplify this more exquisitely than Robert Doisneau, a master of humanist photography, whose charming images of everyday Paris embody the romanticism so synonymous with the city.

Kiss by the Hotel de Ville is undoubtedly his most iconic and is perhaps the most quintessential photographic depiction of love ever captured and, though the image itself was staged, (part of a lovers-themed series for Life Magazine)  the couple, and the passion they display is genuine. 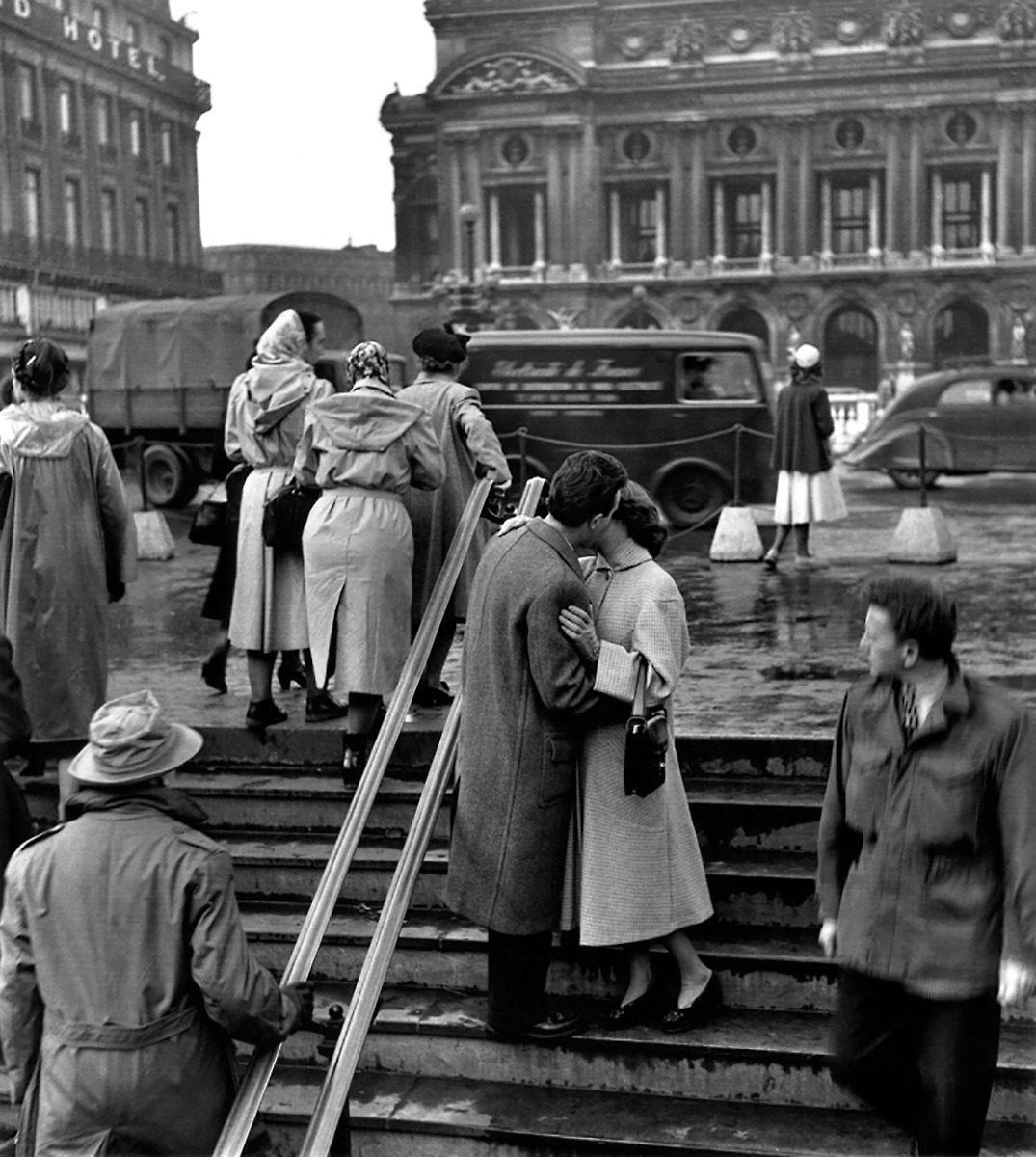 Kiss at the opera , Paris 1950 © Estate of Robert Doisneau

Undoubtedly one of the most iconic photographs of the 20th century, German/American photojournalist, Alfred Eisenstaedt’s image of an American sailor embracing a nurse in New York’s Times Square, was captured during the celebrations of Japan’s surrender in 1945, officially marking the end of the second world war. 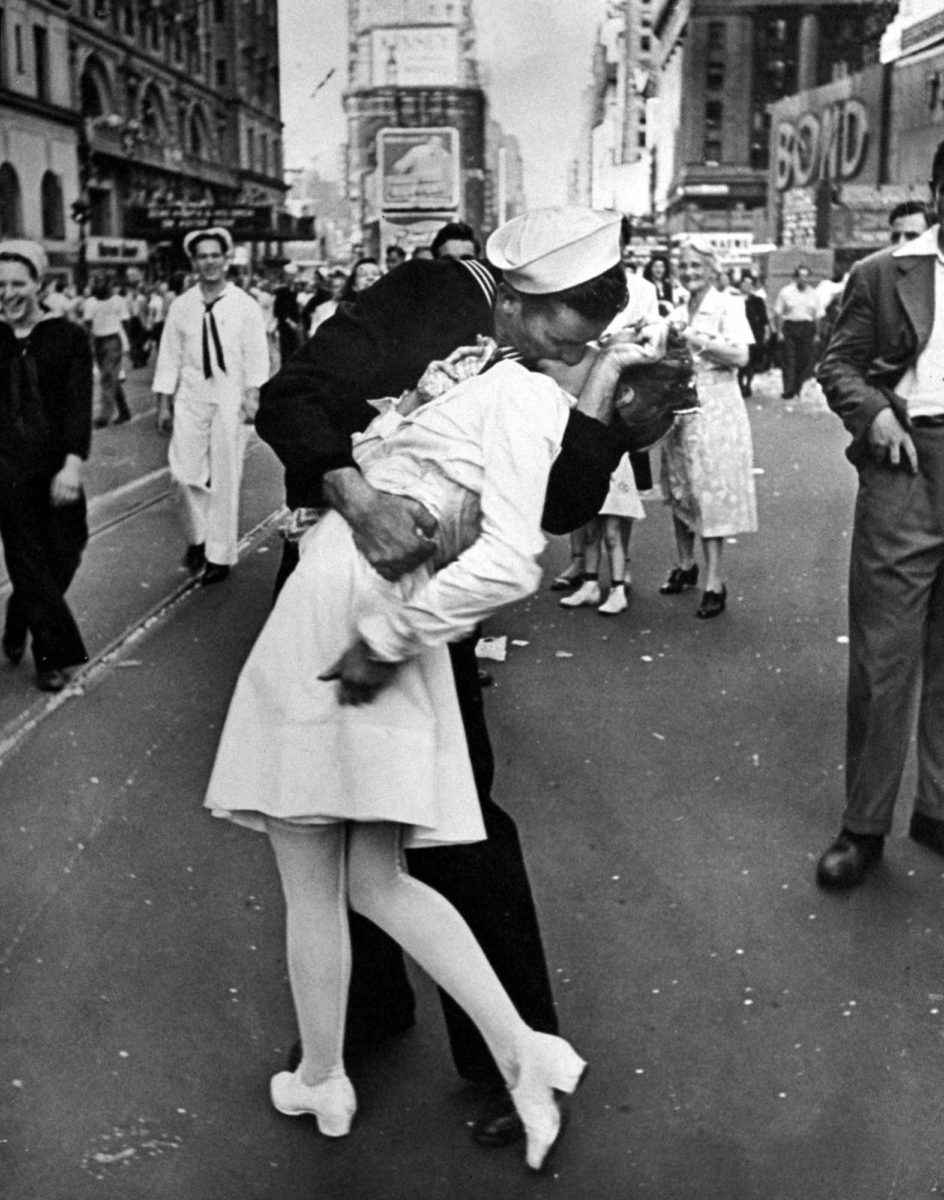 Epitomizing the elation that engulfed the country, it is often cited as a quintessential depiction of romance, though in fact, it would later emerge that the subjects were strangers, and the kiss not reciprocal, which has understandably led to significant controversy surrounding the image.

Less well known, though truer in their depictions of love, are Eisenstaedt’s 1943 series portraying young soldiers at New York’s Penn Station as they bid farewell to their lovers before departing for Europe. 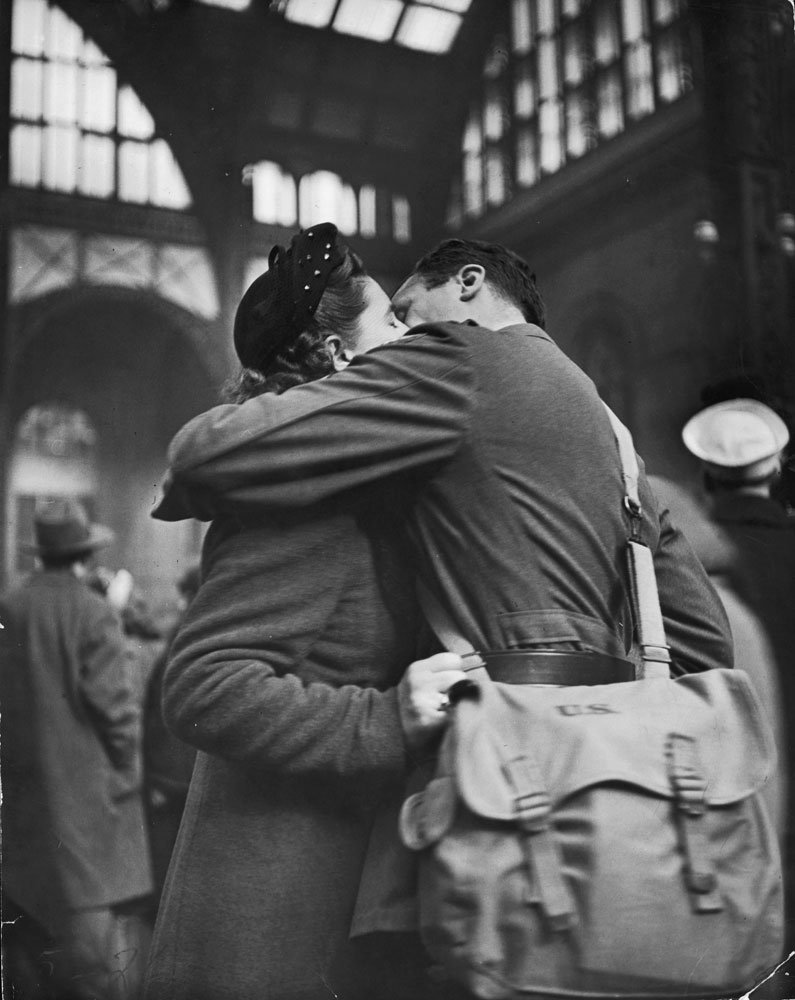 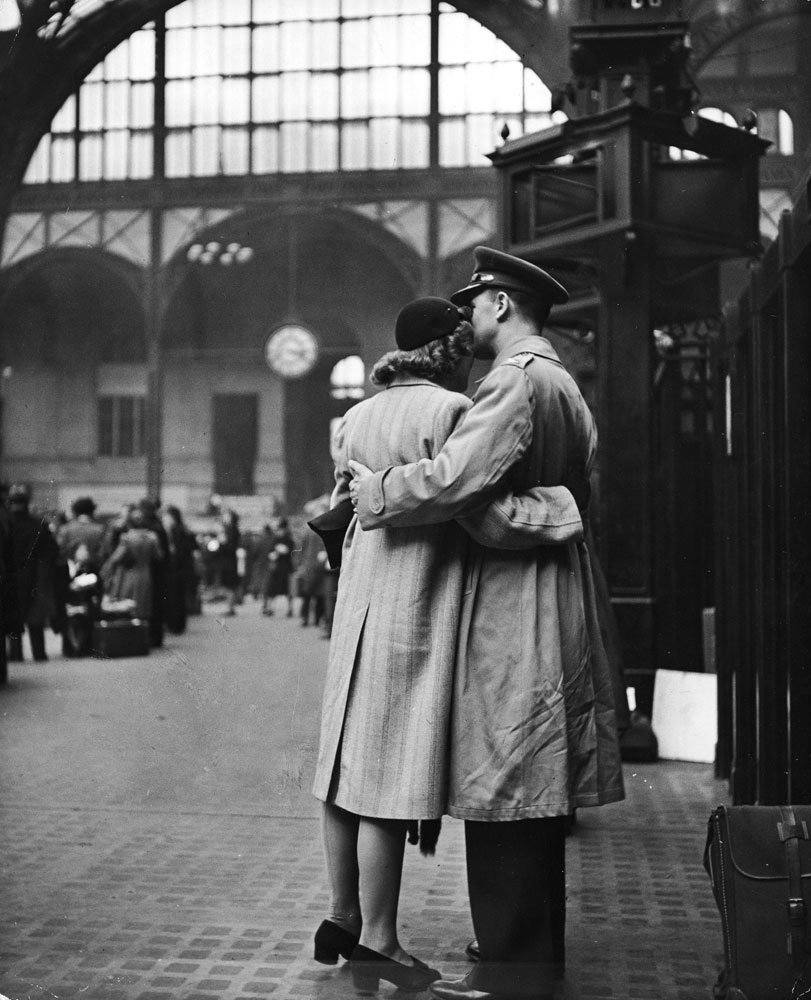 Fraught with sadness, it is obvious that the subjects are acutely aware that it may be the last time they lay eyes on one another, and so, express their feelings with intensity and tenderness befitting the occasion.

Like his contemporary Doisneau, Elliot Erwitt is considered one of the most important photographers of the 20th century, famed for his earnest, yet the often convivial approach to documentary photography. “I observe, I try to entertain, but above all, I want pictures that are emotion. Little else interests me in photography.” he once said. This ideology is personified brilliantly in California Kiss: a young couple reflected in the side mirror of the car in which they sit, overlooking the coastline, a beautiful image, and one that brilliantly conveys the joy and warmth of their affection.

Prominent lovers throughout history have had their mutual devotion immortalized by photographers. Marcel Sternberger’s intimate series depicting his close friends, Frida Kahlo and Diego Rivera, at their Mexican home in 1952, are such examples.

The most striking of which displays Kahlo gazing reverently up at her husband as he cradles their dog, a delicate moment that belies the sometimes tumultuous nature of their relationship, whilst Jim Marshall’s tender depiction of Johnny Cash and June Carter relaxing at their Tennessee home in 1969, is an eternal tribute to their relationship.

However, perhaps the finest example, and one which truly epitomizes the often bittersweet nature of love, is Annie Leibovitz’s 1980 portrait of John Lennon and Yoko Ono. Widely regarded as one of the finest portrait photographers of our time, Leibovitz was commissioned by Rolling Stone Magazine, to capture a portrait of John for the cover of their upcoming issue.

At the time, Yoko was a hugely polarizing figure, blamed by many for the break up of The Beatles and it was for this reason that the editors decided not to include her. However, John insisted they be photographed together, or not at all. 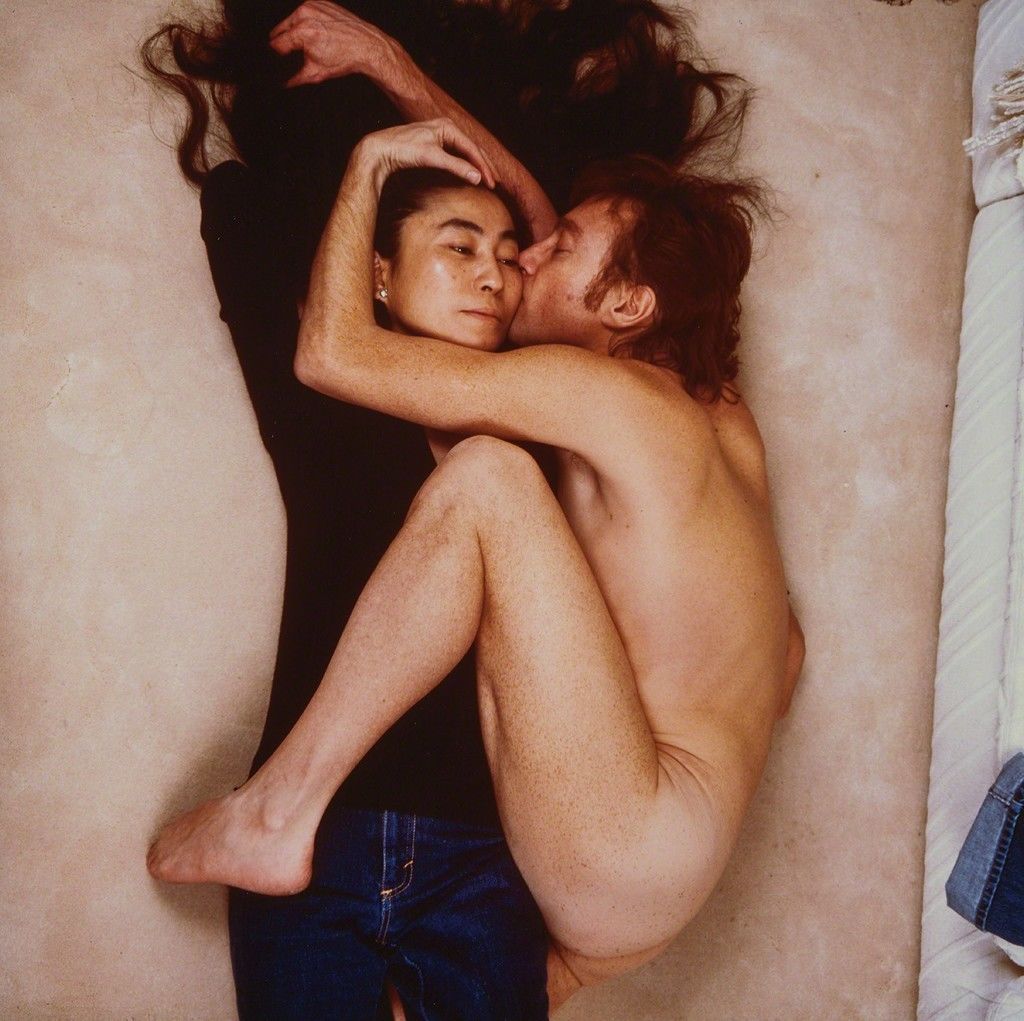 Inspired by the naked portrait of the pair which adorned the cover of Unfinished Music No. 1: Two Virgins (the seminal collection of their shared musical experiments, released in 1968), Leibovitz initially asked them both to remove their clothes, but Yoko refused, and so the image portrays John naked and vulnerable curled up in an almost fetal like position, clinging lovingly to the contrasting, elongated figure of his darkly clothed wife.

Utterly compelling, and strikingly intimate, it acts as a profound symbol of the intense love the couple shared and carries particular significance as it represents the final photograph of them together. Just hours later, John was shot and killed as he left his apartment. 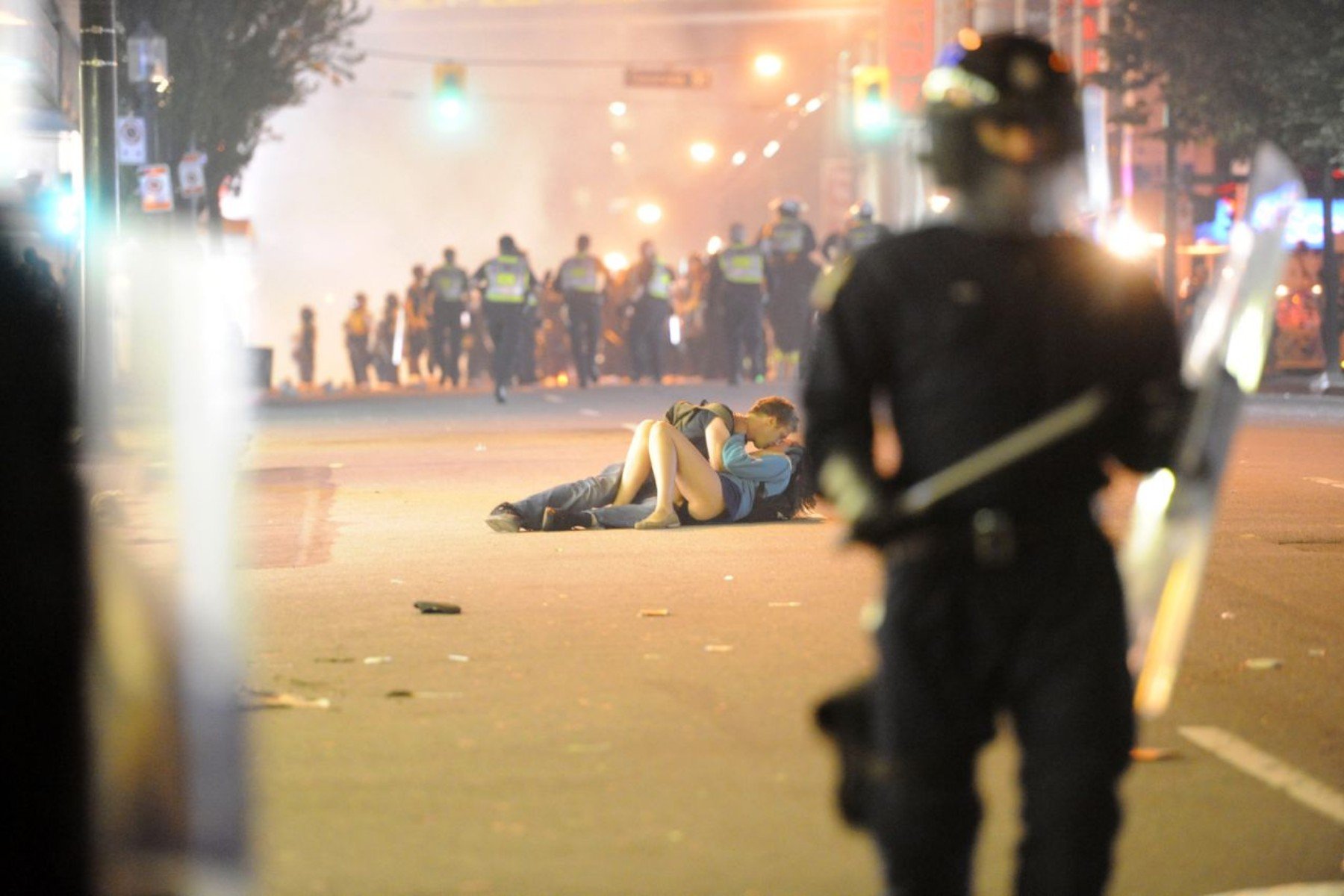 One of the most widely shared photographs of recent years was taken by photojournalist Richard Lam during the 2011 riots in Vancouver. Lam was covering the Stanley Cup hockey game between the Vancouver Canucks and the Boston Bruins, a game the local team lost, sparking the now-infamous disorder amongst which, Lam captured a young couple lying on the ground in a passionate embrace, unperturbed by and apparently blissfully unaware of the chaos surrounding them;