“I became a surrealist because I kept walking around the same blocks, and I started taking a picture of a guy’s shoe. I didn’t know what I was doing exactly. I was just being led by whatever I would see.” – Mark Cohen

Mark Cohen left his house in Wilkes-Barre, with his Leica in one hand and flashgun in the other, everyday for over 30 years, with absolutely no pretences. Living in a small mining town in Pennsylvania could be a source of creative frustration for most photographers, but Cohen learned to look for the details during his frequent walks around the neighbourhood. 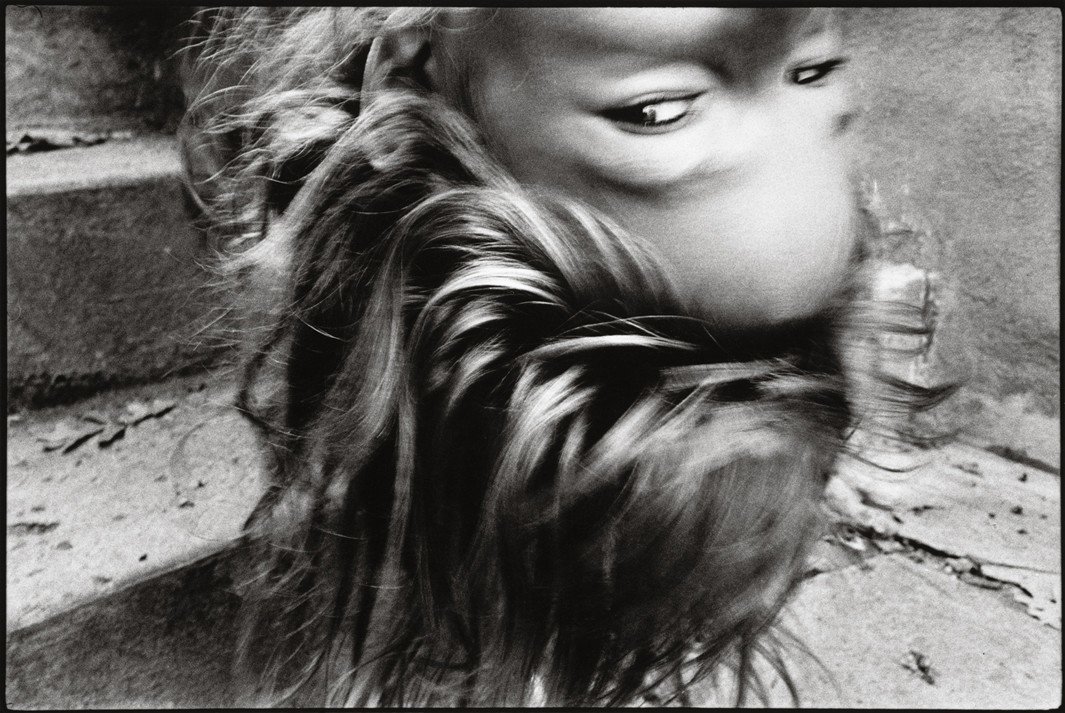 Roaming around with no intent, he developed a unique way of capturing bizarre fragments of life in his hometown. His entire career has been spent trying to manufacture happy accidents.

“I’m in my backyard making these. The whole country is my studio. I used to go work under a certain bridge if it was pouring, because people used to hide there from the rain. If it was a cloudy day, I would go to a different place. So I used these neighborhoods like a set. And I still use them like that. There are certain places I know that, if I go there in the evening– I like to take pictures at dusk– they will have a certain flavor even today.” 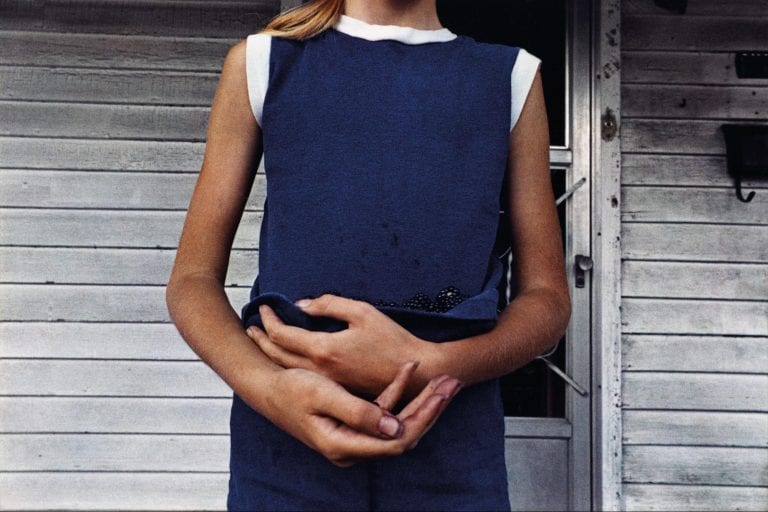 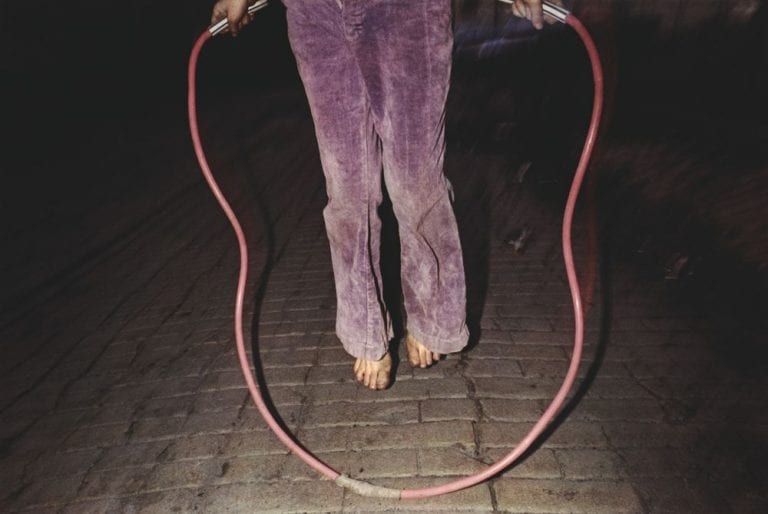 Dark Knees collects decades of work in Wilkes-Barre and the nearby area of Scranton. Though uninterested in depicting a social portrait of the regions, Cohen nevertheless succeeds in capturing the gritty reality of his surroundings.

His protagonists, or rather their limbs and midriffs, are often those found in works of social realist photographers like Dorothea Lange; the poor and working classes, people more likely to live out their lives on doorsteps or street corners. However, rather than approaching these subjects with humanistic or empathetic intent, he approaches them like a paparazzi, like a muted-Weege, all flash and fascination. 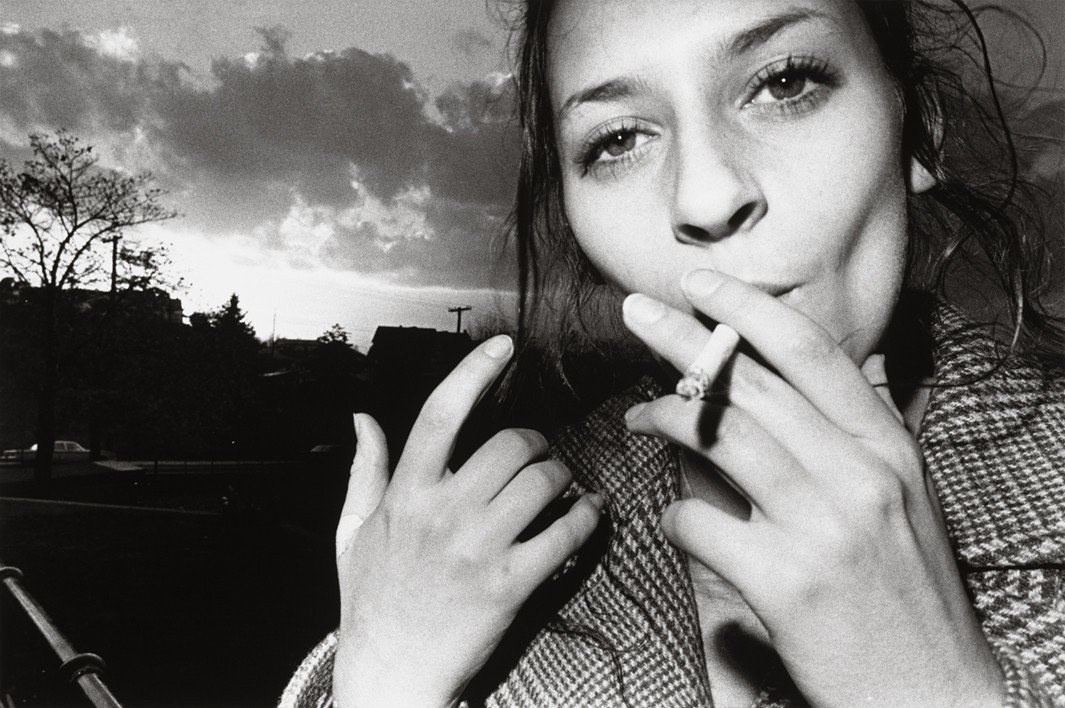 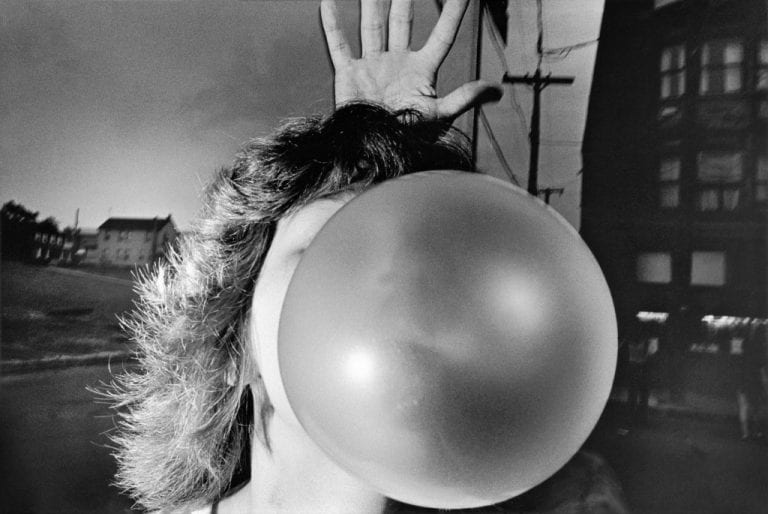 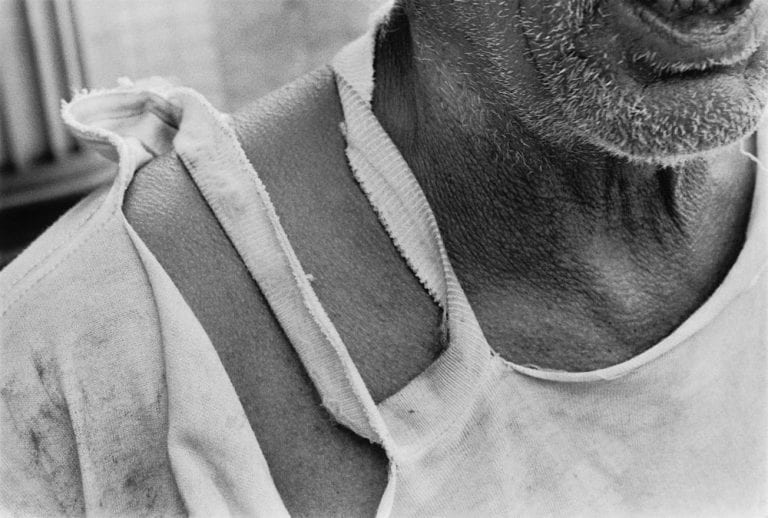 Cohen works on impulse, moving uncomfortably close to his subjects, to take what he calls “grab shots” – pictures taken at arms length without looking through the viewfinder, a technique that is just as much about the apprehension as it is about the release.

Not knowing how his photos will come out, Cohen discovers them in his darkroom. Before that, he approaches what he’s immediately drawn to, ankles, teeth, zippers, elbows, and other small details we tend to overlook. 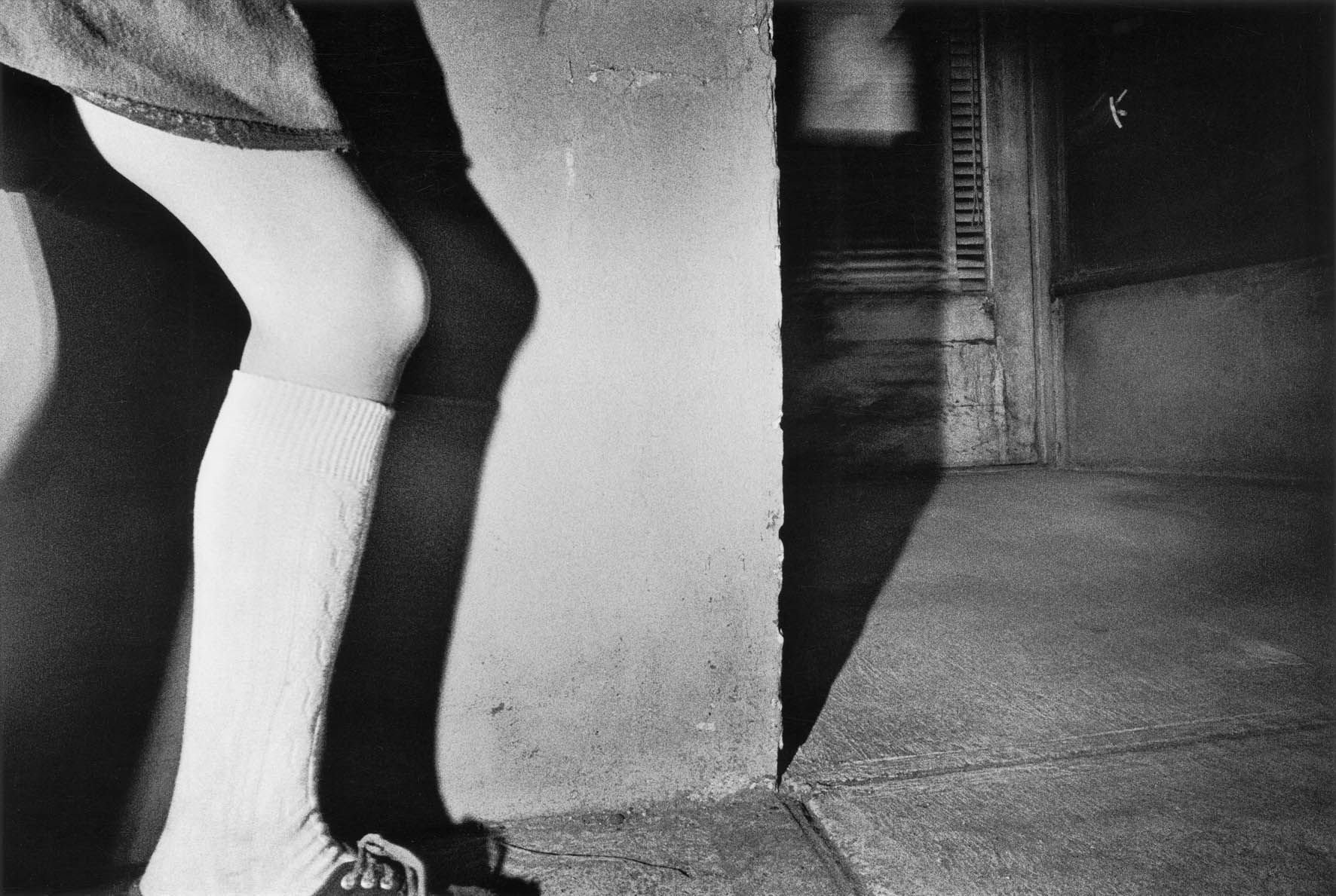 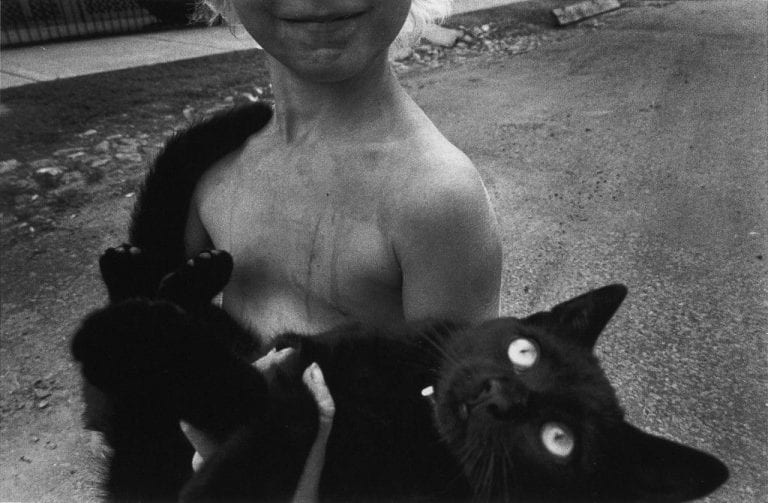 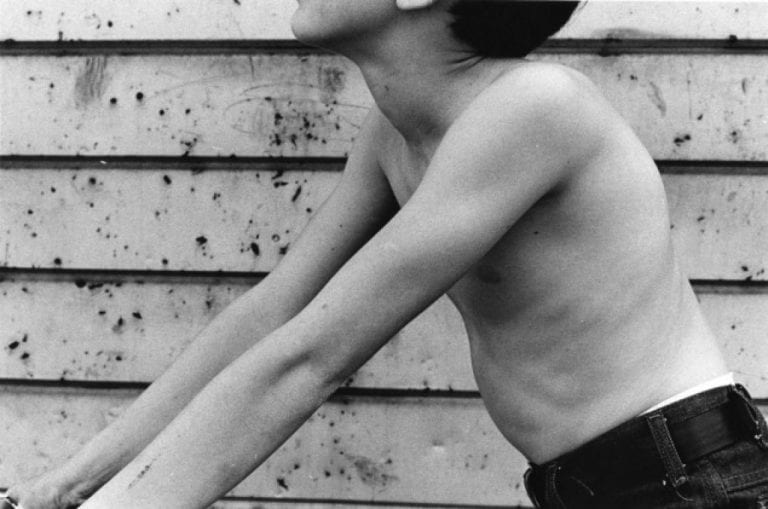 But Cohen’s ‘accidental’ style was no accident itself. He had owned a camera since he was a child and worked in his own basement darkroom at 14. It was after a high-school encounter with Cartier-Bresson’s seminal book “The Decisive Moment” that Cohen realised he’d found his calling in photography.

Obsessed with the transient power of the photograph thereafter, Cohen began to work on his own signature “decisive moment”, one which is now almost as distinctive as that of Cartier-Bresson. 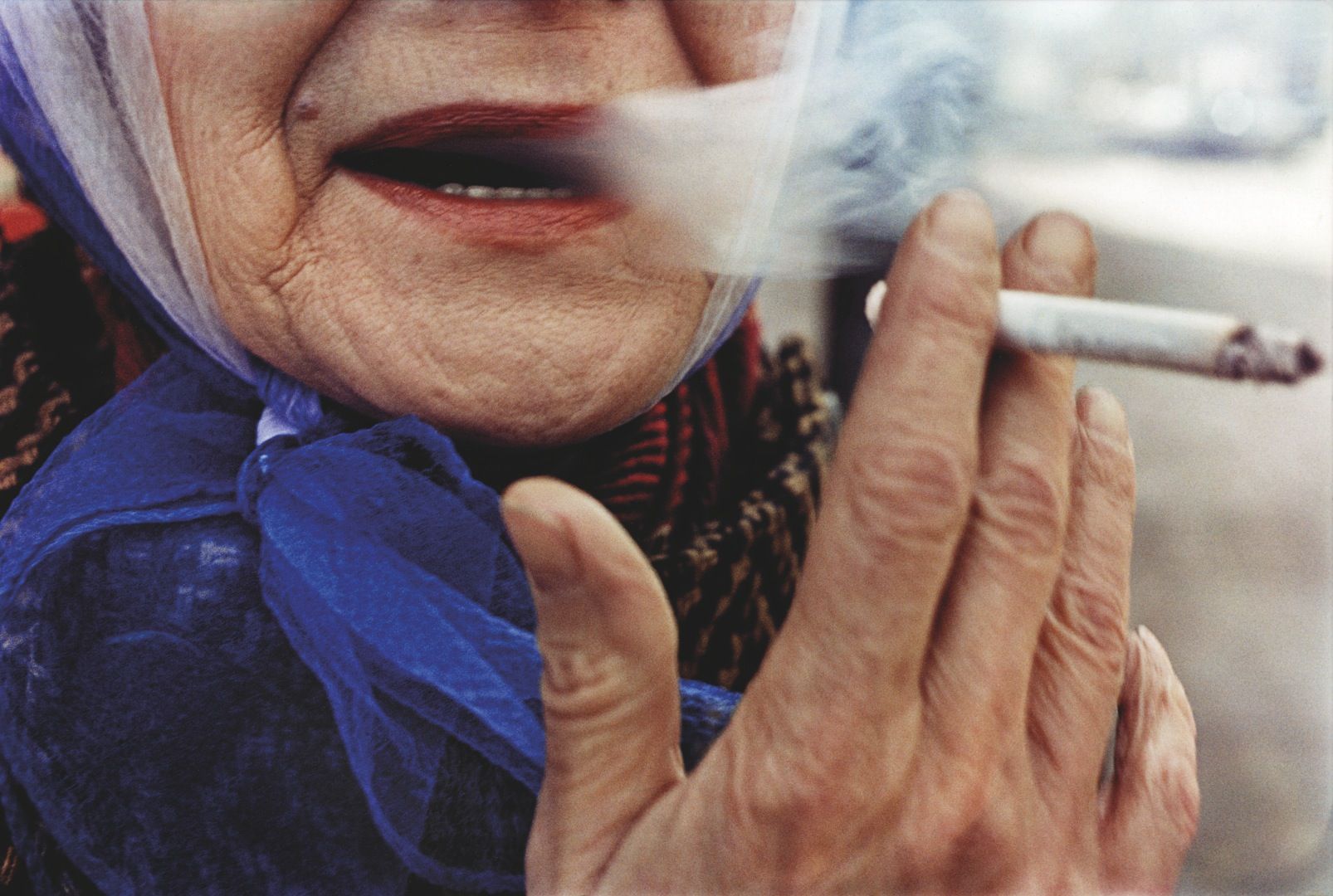 The work in this book speaks of the strangeness of mundane things. It is frenetic, raw and captivating, and conveys something hallucinatory, that only Cohen has the ability to capture.

Accompanied by banal descriptions of his photos in his own childlike handwriting only serves to emphasise Cohen’s innate restless energy. As they are noted, the descriptions look almost like a shopping list, written by a frenzied consumer, in a wild hurry to collect all the items and rush back home. 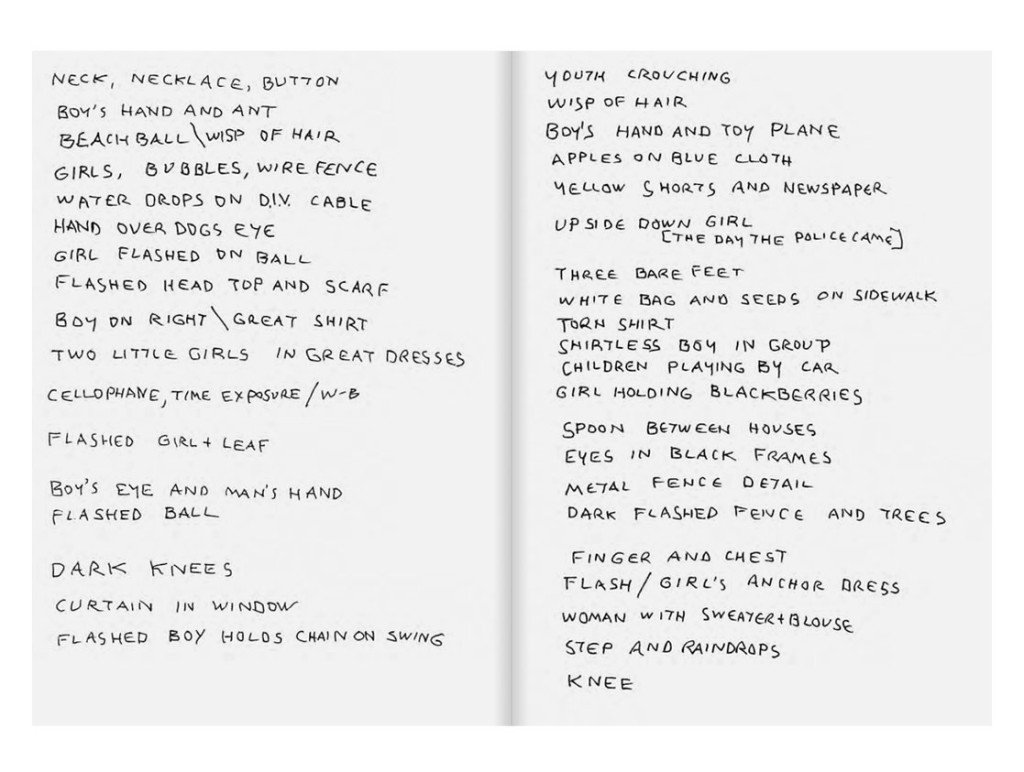 Dark Knees’ frantic rhythm translates to almost every image. The pictures bear no stillness whatsoever, it’s almost as they’re vibrating, waiting to slide out of frame. His brutal cropping and alarming closeups hint towards Cohen’s desire to make photos that never intended to please anyone but himself. 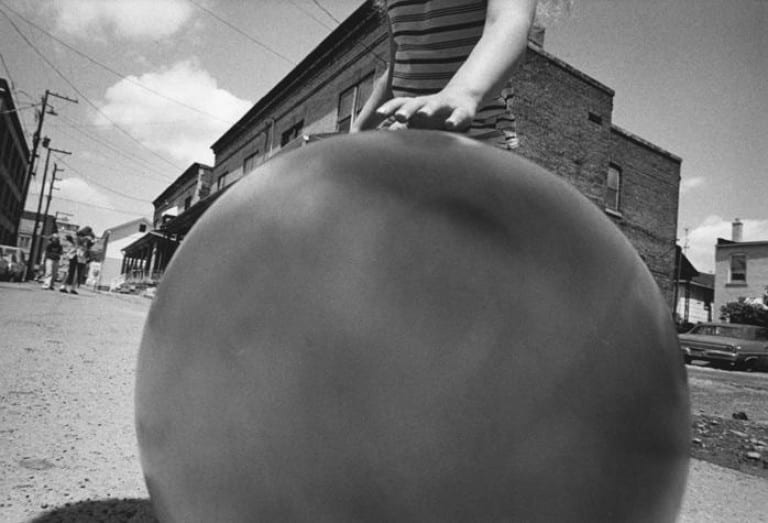 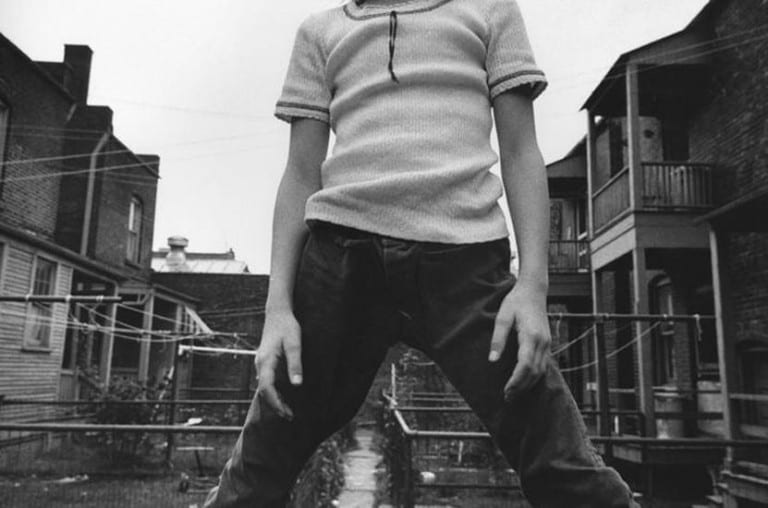 A darkly humorous contemporary eye that rudely hints towards our modern voyeuristic consumption of images, the images may have been strange in their day, but are now strikingly current.

Like any great surrealist, Cohen’s work transcends the spatio-temporal confines that limit artists working in other genres. Our focus falls on the abstract geometry, angles, and lines of of the body as though we are looking at extraterrestrials. 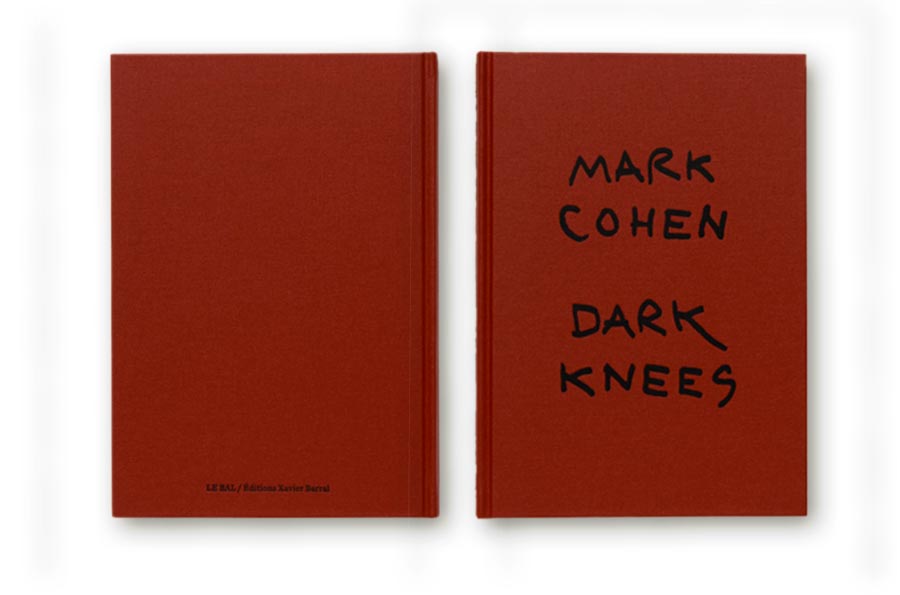