NB: This article contains images which may be distressing to some readers.

The “rainbow nation”, South Africa, a country still healing from the wounds of apartheid, has endured international isolation, armed opposition and decades of mass protests. Yet despite these hardships, South Africa has set about societal reconciliation processes since the democratically-elected leadership of Nelson Mandela was established in the nineties. South Africa exists as a unique place on the continent, with a strong identity and a big story to tell, making it one of the most fascinating places for photographers to shoot.

Goldblatt’s primary aim was to show the world the injustices of the apartheid regime, but he took a behind-the-scenes stance rather than marching towards the picket lines. His focus lay on the complex realities of daily life under the apartheid. His photos are incredibly empathetic, photos which beautifully strip down his subjects, revealing their humanity.

This striking photograph by Magnum legend, Abbas, is a perfect visual metaphor for life under Apartheid-era politics. It depicts a Police training academy for aspiring black officers, but also demonstrates the oppressive power structures inherent within greater society.

As rows of black men stand half naked behind their commanding officer, their faces betray traces of discomfort, anger, and anguish whilst their general stands proud and stern. Abbas’ image could almost be staged, and immediately reminds the audience us once again about the history of racial oppression, suggesting that one white life is always seen as more valuable than multiple black lives.

Until June 16th 1976, the international media had largely ignored the atrocities of apartheid. On this day, several thousand Soweto students joined together in protest to oppose the introduction of mandatory Afrikaans-language instruction in their local schools. Gathering momentum and crowds from other schools, the police began to retaliate with teargas. Photographer Sam Nzima who was covering the protests for The World, a Black focused and run newspaper in Johannesburg, was present.

Shooting photos as bullets rained on the crowds, Nzima witnessed the police killing of Hector Pieterson, a young boy. As Nzima continued to photograph, high schooler Mbuyisa Makhubu picked up Pieterson’s body and ran to safety with Pieterson’s sister. The image of Pieterson and Makhubu shocked the world, demonstrating that the South African regime had killed its own people- and children at that. Nzima was forced into hiding amid death threats after publishing the image, but the effects of the photograph were not easily silenced. The opposition that would eventually topple the racist system had been generated by a photograph.

Pieter Hugo, a white South African photographer who has lived in the country all his life, has made controversial work in Nigeria and the rest of the African continent. Yet his photographs are well-balanced juxtapositions of tenderness charged with a fervent political energy. Hugo has frequently vocalised his frustration with the political climate of South Africa, saying “Look at South Africa now… it’s all about self-enrichment. The opportunists have taken over. You want to know what makes me despondent? These problems could be solved. But they aren’t.”

His portrait of two brothers is reminiscent of the iconic picture taken by Sam Nzima during the Soweto Uprising of 1976. Yet Hugo’s intention was to reverse the power roles in his photograph: “I wanted them to feel empowered in the pictures, not just victims.”

Bourke-White was the first American female photojournalist, covering conflicts all over the world, and now famous for her brave and shocking images of some of the world’s greatest atrocities. Her contact with Communist party activists in South Africa led her to a protest against pass laws, held on the outskirts of Johannesburg, where she photographed the crowd and individual speakers, including carpenter Phillip Mbehle, pictured here. In this iconic photo you can almost hear his shout of anger, his demand for equal rights, and feel his outrage at the conditions black South Africans were subject to under the new laws.

Ponte City, a residential tower envisioned in the 1970’s and built during Johannesburg’s economic boom, was an architectural fantasy promising its residents every amenity they could imagine and claiming people could “Live in Ponte and never go out.” The 54-story behemoth now stands like a failed science-fiction utopia, crumbling into decay, dreams dashed as it becomes home to illicit activity. Now notorious as a crime-hub, the tallest residential skyscraper in South Africa has been documented in an encyclopaedic manner by South African photographer Mikhael Subotzky and British artist Patrick Waterhouse.

Drawn to investigate the dilapidating building, their exhaustive approach covers every aspect of the tower, including every door, television set, every window and each resident, in the hope of uncovering what lies at the core of the lives of the citizens of Johannesburg. Their mammoth project was the winner of the Deutsche Borse prize for photography in 2015. 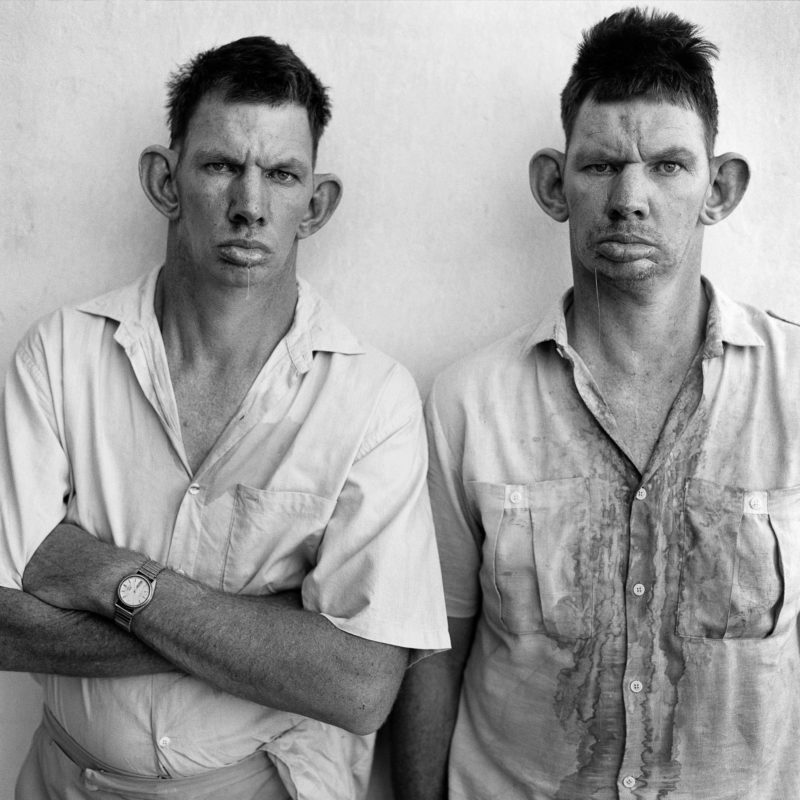 Roger Ballen’s bizarre and extreme works have every intention of confronting their audience. As a leading figure in modern fine art photography, American-born Ballen has spent over 30 years living and working in South Africa. Since the 1990’s he has developed a style he calls ‘documentary fiction’ – a confrontation of the deep recesses of his own mind engineered through powerful fabricated psychodramas. His style is distinct and unsettling; stark black and white square format photographs, usually depicting people living on the margins of society, who appear, as actors, to create unnerving and discomforting scenarios. These images merge ideas of social critique with interpretive visual metaphors which explore the movements of the mind.

Practitioners of African medicine in Southern Africa fulfill different social and political roles within their communities. In many towns they are responsible for the physical, emotional and spiritual wellbeing of their townsfolk, performing rituals of protection, divination and directing the spirit after death. The two main types of traditional healers within the Nguni, Sotho-Tswana, and Tsonga societies of Southern Africa are the diviner (sangoma), and the herbalist (inyanga).

Healers are highly revered and respected in a society where witchcraft is believed to be the primary cause of illness. Magnum’s Chris Steele-Perkins documented all facets of South African life from day-to-day occurrences to moments of great change. This quieter image of his demonstrates some of the rich cultural history alive within a complex and divided nation. 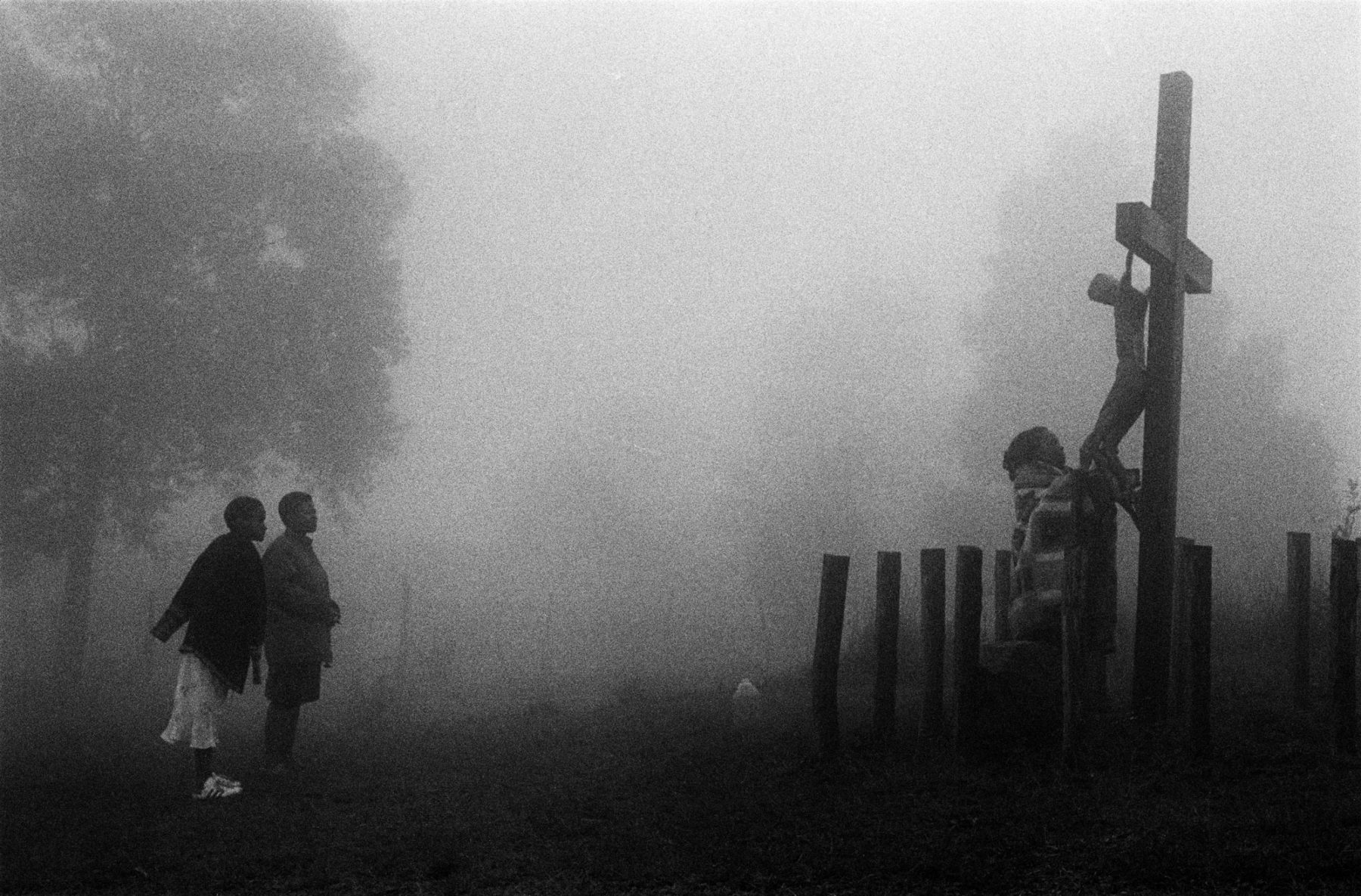 Andrew Tshabangu’s haunting black and white images suspend South Africa in an ethereal realm that we are unused to seeing. Coming of age as the aftermath of the Soweto uprising reared its ugly head, Tshabangu did not flee like many youths his age, but instead took refuge in Catholicism, hoping to enter the priesthood.

When he was not accepted into the order, his only other means of respite was the camera, the only item aside from a crucifix that he felt had the power to change the world.

Nelson Mandela, the leading figure in modern South African history, was an anti-apartheid revolutionary, political leader, and philanthropist who served as President of South Africa from 1994 to 1999. The anti-apartheid fighter who spent 27 years as a political prisoner before becoming his nation’s first democratic leader – and first black president elected in a fully representative democratic election, is here pictured raising a clenched fist, the sign of black triumph, to supporters in Mmabatho, South Africa, upon his arrival for his first election rally. On 10 May 1994 he was inaugurated as South Africa’s first democratically elected President.

“There is no passion to be found playing small -in settling
for a life that is less than the one you are capable of living.”
– Nelson Mandela