From social documentary through to high-end fashion, the history of England as told through photographs is as complex and divided as the nation itself.

A nation of pagans and punks, royalists and refugees, there is no single facet of life on the isle that cannot be disseminated through a thousand images. Here we celebrate the diversity of genres, photographers and peoples that have contributed to our image of modern-day England.

Billingham, the pioneer of ‘squalid realism’ began shooting his seminal series Ray’s a Laugh when he was only 19. Originally, Billingham thought that he would use his pictures as studies for art school paintings, but didn’t finish any. Eventually his photos were discovered in his student room by a professor at his art college, who urged Billingham to submit them to galleries.

The series documents the lives of Ray and Liz, Billingham’s parents whom he called by their first names. It reveals the chaos which they were forced to live in as a result of Ray’s alcohol addiction. Billingham chose to shoot the images on the cheapest film he could find and used a harsh flash to add to the candidness of the series. Between the rawness and disarray, Billingham’s images still manage to show tenderness, and even joy. In 2001, Billingham was shortlisted for the Turner prize. Ray and Liz, in pictorial form, entered the photographic history books without ever leaving their  small town of Cradley Heath. 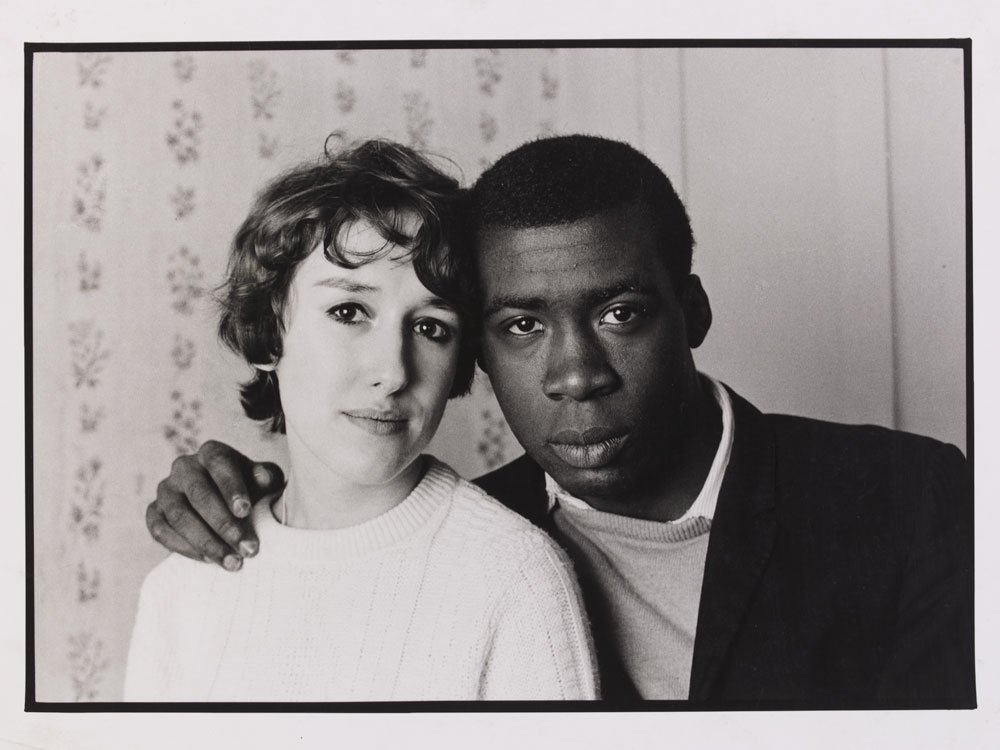 Charlie Phillips was given a Kodak brownie camera by a black American serviceman in his native Jamaica. After immigrating to London, England in 1956 he began to document life in his local community of Notting Hill, an area which had a large British Caribbean community following mass migration in the immediate post-war period.

This image was taken in 1967, a decade after a period of intense racial hostility in North London. In 1958 Notting Hill and the surrounding areas had been plagued by the eruption of violent and divisive attacks instigated by racist white youths. The events which later became known as the Notting Hill race riots began when a group of white men assaulted a white woman on the basis of her marriage to a black man. The disturbances, rioting and attacks continued every night for a week. Phillips’ beautiful image recalls the turbulence of the time, but hints towards a promising future, one of unity and acceptance. 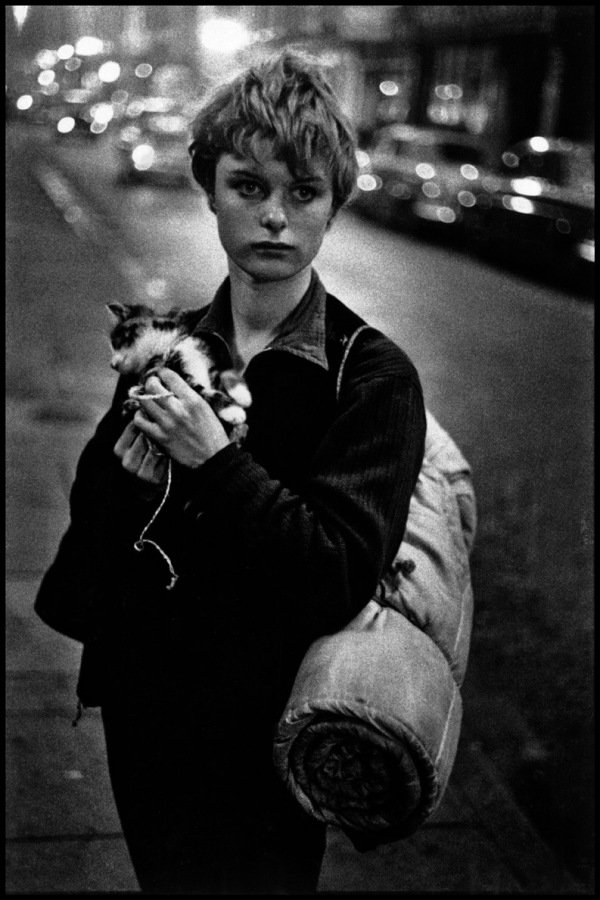 Bruce Davidson, who is known for his intimate photos of American youth also spent some time in England, cruising the streets in his cheap Hillman Minx convertible, with the top down. Davidson, who had always found teenagers intriguing, came across a London gang by accident one day when he was driving, and struck up a conversation. With his particular charisma, it didn’t take long for Davidson to be invited to come and dance with them at a dancehall. Davidson recalls that he had to move on quickly from place to place so only stayed with them for one night.

Of the group, Davidson picked out one girl, and took one of his most iconic shots. “There was a great deal of mystery to her. I didn’t know where she had come from, and I didn’t get her name, but there was something about that face – the hopefulness, positivity and openness to life – it was the new face of Britain.” 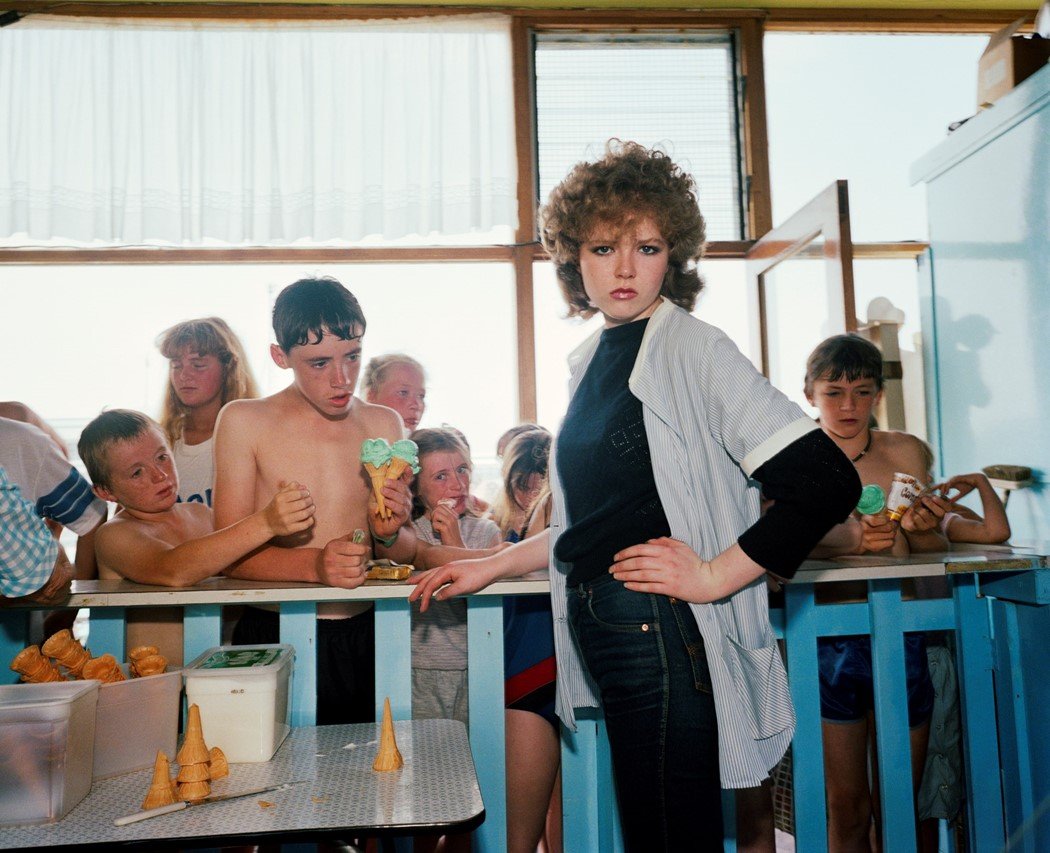 One of the first British photographers to embrace the new trend in colour photography adopted by American photographers such as Stephen Shore and William Eggleston was Martin Parr. His series ‘The Last Resort’ has become both famous and infamous, acknowledged as one of the most quintessential representations of the British public, but likewise criticised for its portrayal of the working classes as uncouth and disorderly.

Yet, Parr claims it was not his intention to portray the people in his photos in a bad light. His entire career has been spent developing a new tone in documentary photography, projects that critically analyse modern life. He uses humour to understand his surroundings in an anthropological way. He is now represented by Magnum, much to the initial disdain of many other Magnum photographers at the time of his initiation. However, his work is now recognised as some of the most important in British photographic history. 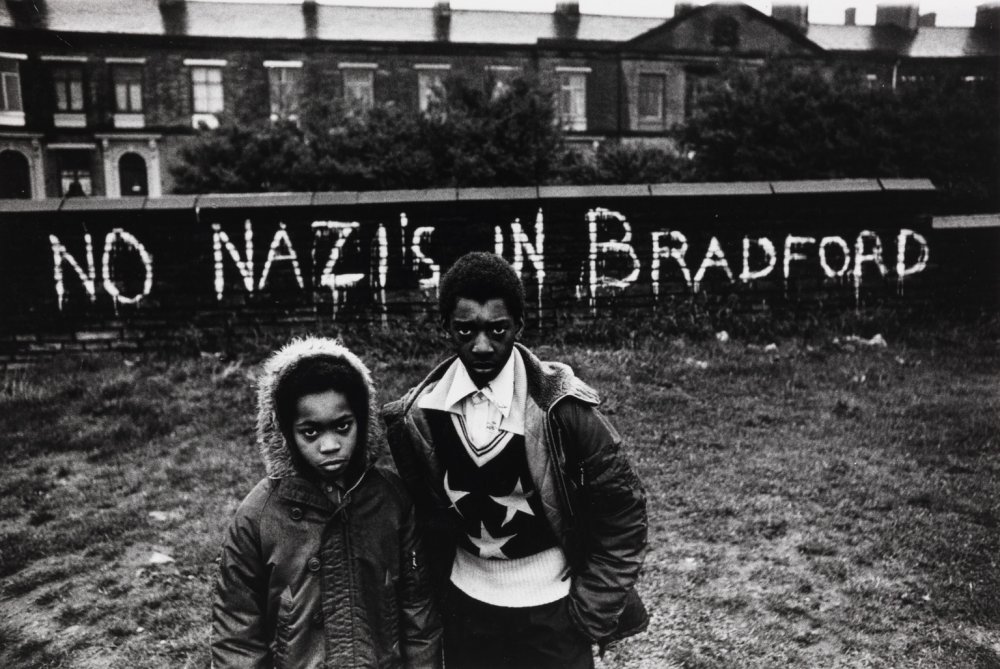 McCullin is famed for his images of conflict on the frontlines of international wars, but he also shot extensively in England. This poignant photograph speaks of times when tensions were high and the disenfranchised youth expressed their anger and feelings towards authorities of the era.

McCullin’s focus on the UK grew after studying the work of Billy Brandt, whom he idolised. Brandt photographed both the rich and poor, with equal respect. McCullin, who came from a working class background, found that he could relate more to those struggling under the Conservative government of the time, and turned his lens on the impoverished. This image speaks a thousand words; the faces of the children expressing fear, dissatisfaction, anger, rebellion and innocence all at once. 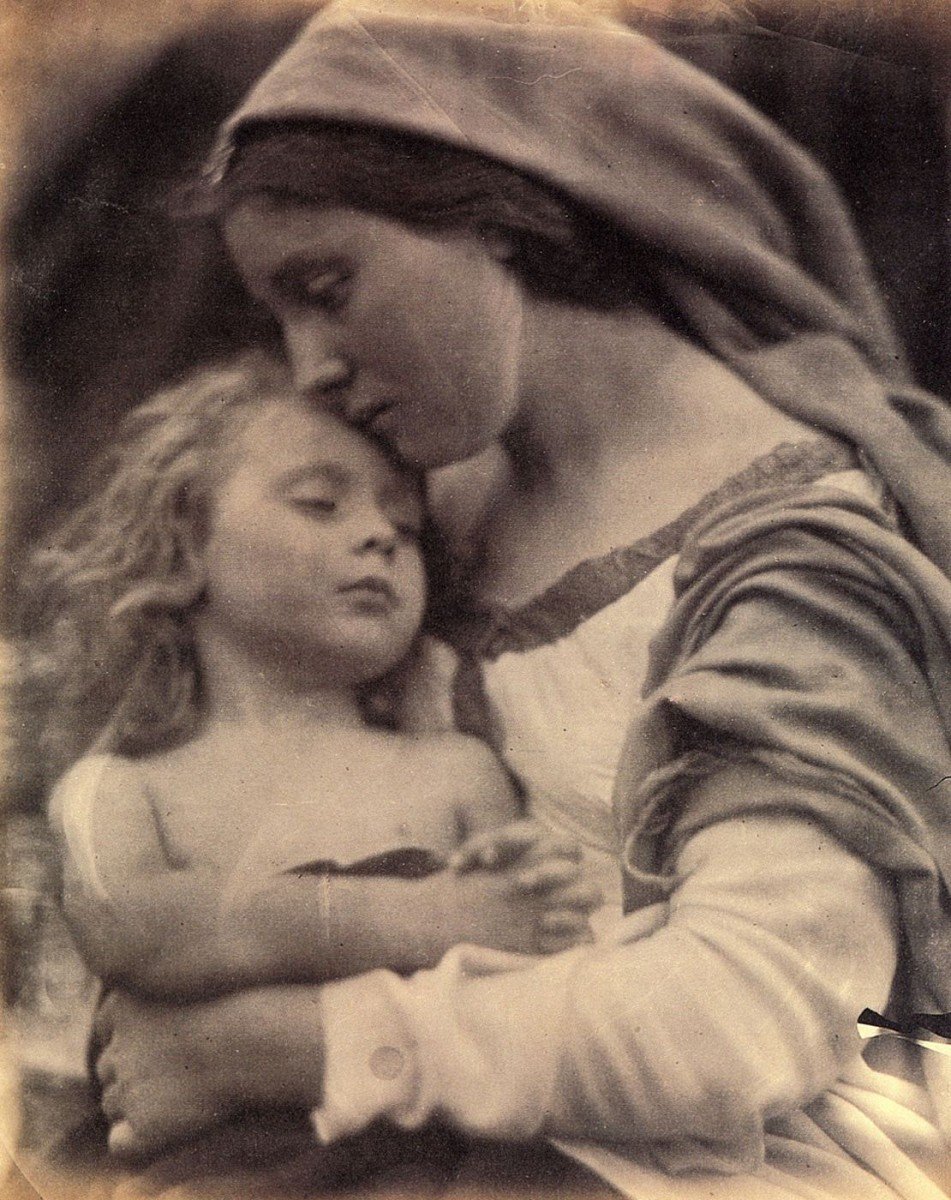 Photographing between the period of 1863 till her death in 1879, Julia Margaret Cameron was one of the most important and creative photographers of the 19th century, a true pioneer. Shooting prominent figures in the arts and sciences of her time, amongst them, Charles Darwin and Alfred, Lord Tennyson, Cameron is famous for her use of atmospheric lighting, soft focus and long exposure techniques.

Her work is immediately distinctive from her peers; trends in photography at the time were rigid and traditional, whilst she chose to portray her subjects in a more enigmatic and allegorical light. Cameron made her work on glass plates, the necessary long exposures resulting in her photos having spiritual and romantic qualities. Cameron claimed to have been inspired by scenes from religion and literature, and her hugely influential work is now recognised as having huge artistic significance. 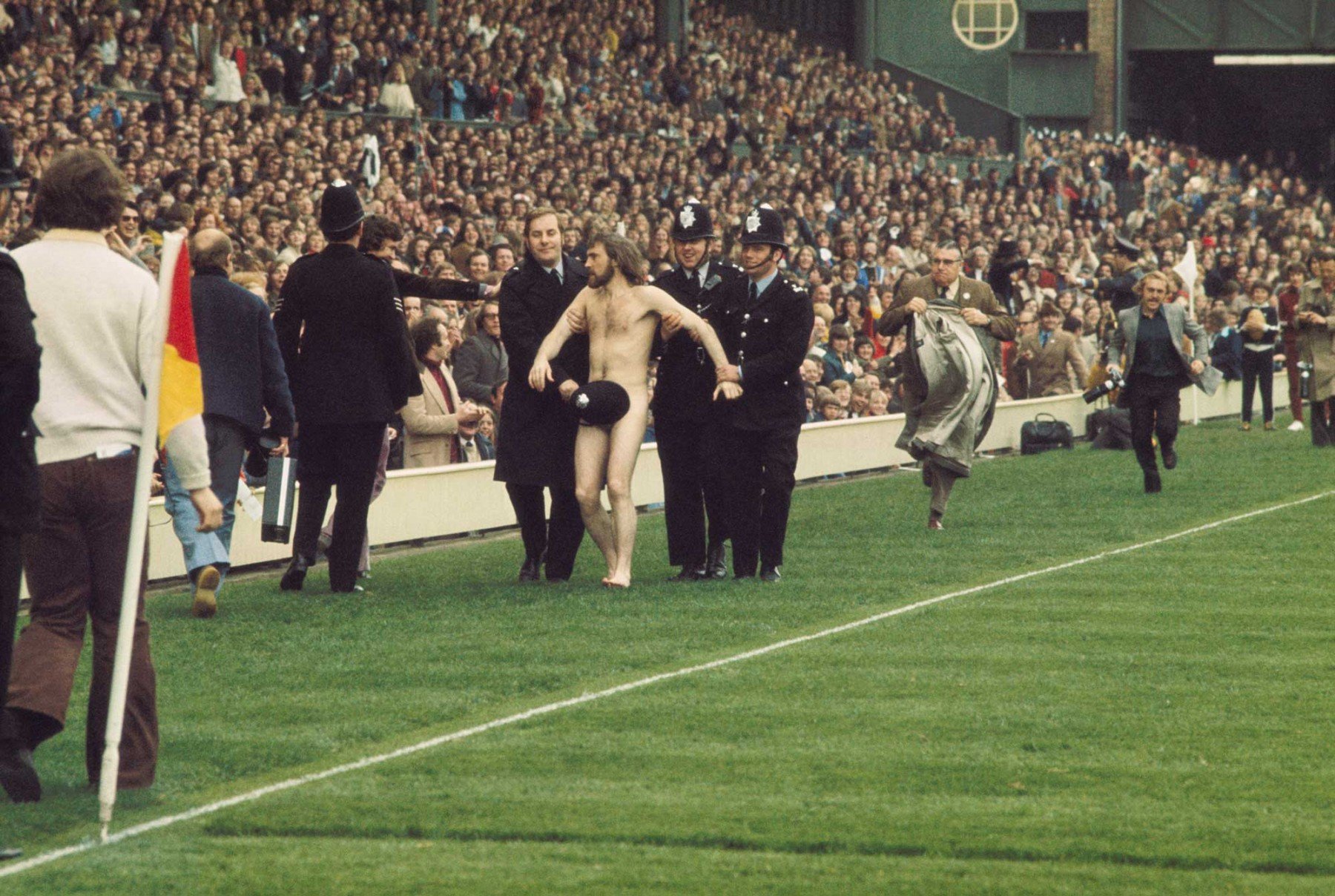 7. Ian Bradshaw – Streaker Michael O’Brien is arrested at an international rugby match between England and France, 1974

Michael O’Brien started the trend of streaking at sports matches, a tradition that still, somehow, continues to this day. The Australian stock broker was dared £10 to run naked across the field at an England vs. France rugby game. In an extremely fortuitous moment, press photographer Ian Bradshaw managed to capture the instance policeman Bruce Perry covered O’Brien with his helmet. “It was a cold day and he didn’t have anything to be proud of, but I didn’t think twice about using my helmet.”

Bradshaw’s image shares a striking resemblance to a religious or renaissance painting, with the naked O’Brien playing the role of a persecuted Jesus. The photograph won numerous awards including the World Press Photo of the Year. It was also chosen as the “Picture of the Year” by the Life Magazine and “Picture of the Decade” by People magazine. 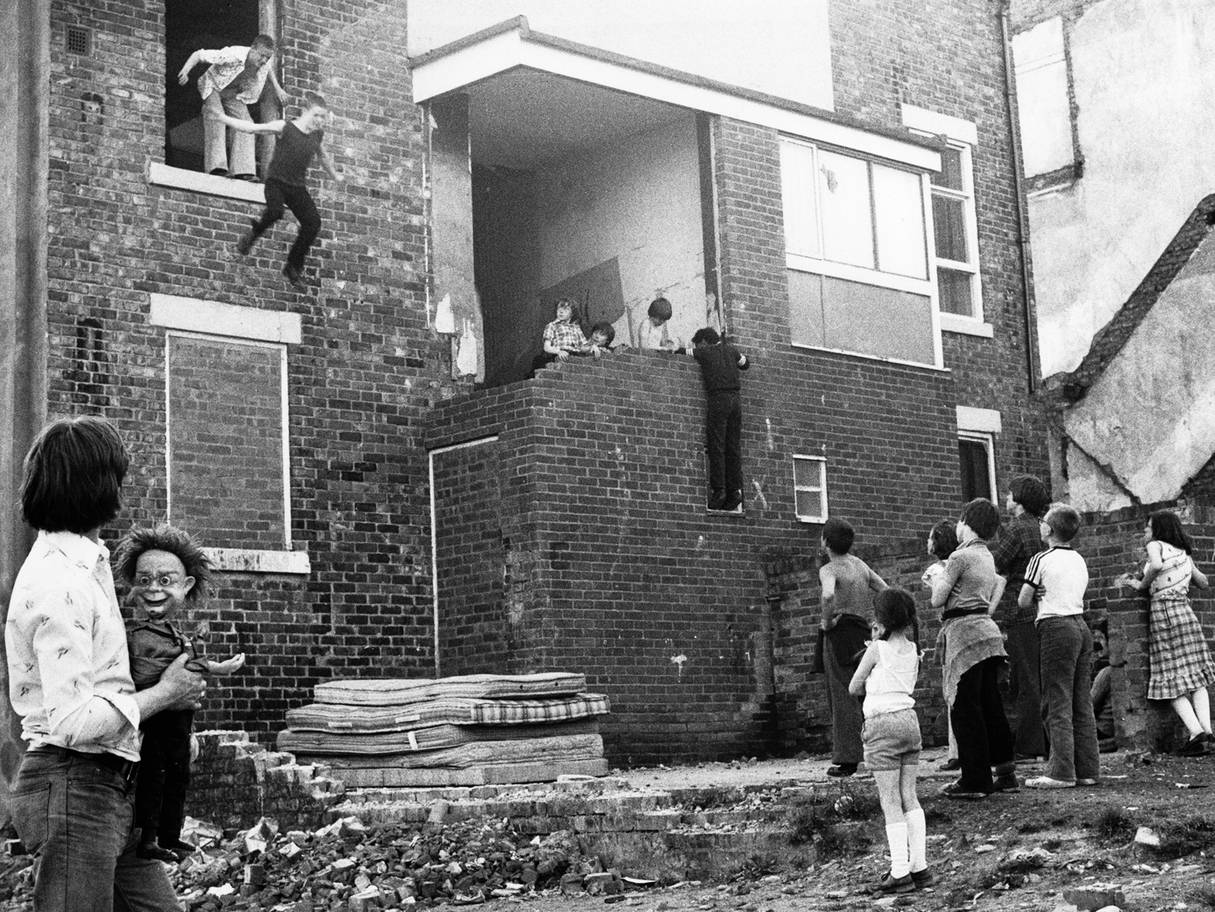 In the times of mass factory and mine closures, Tish Murtha’s sharp social observation and lyrical sense of place drove her to depict the social dereliction that was sweeping certain areas of the nation in the hopes that her work could potentially be used help those being offered little political assistance.

Her series Youth Unemployment has become key in showing the social and economical division present during the times of Margaret Thatcher. Murtha’s photos are populated with friends, family and neighbours. Her strong personal ties to the subject matter compelled her to create work that could confront the reality and impact of political decision making of the day. In February 1981, Murtha’s work was raised as a subject for debate in the House of Commons. 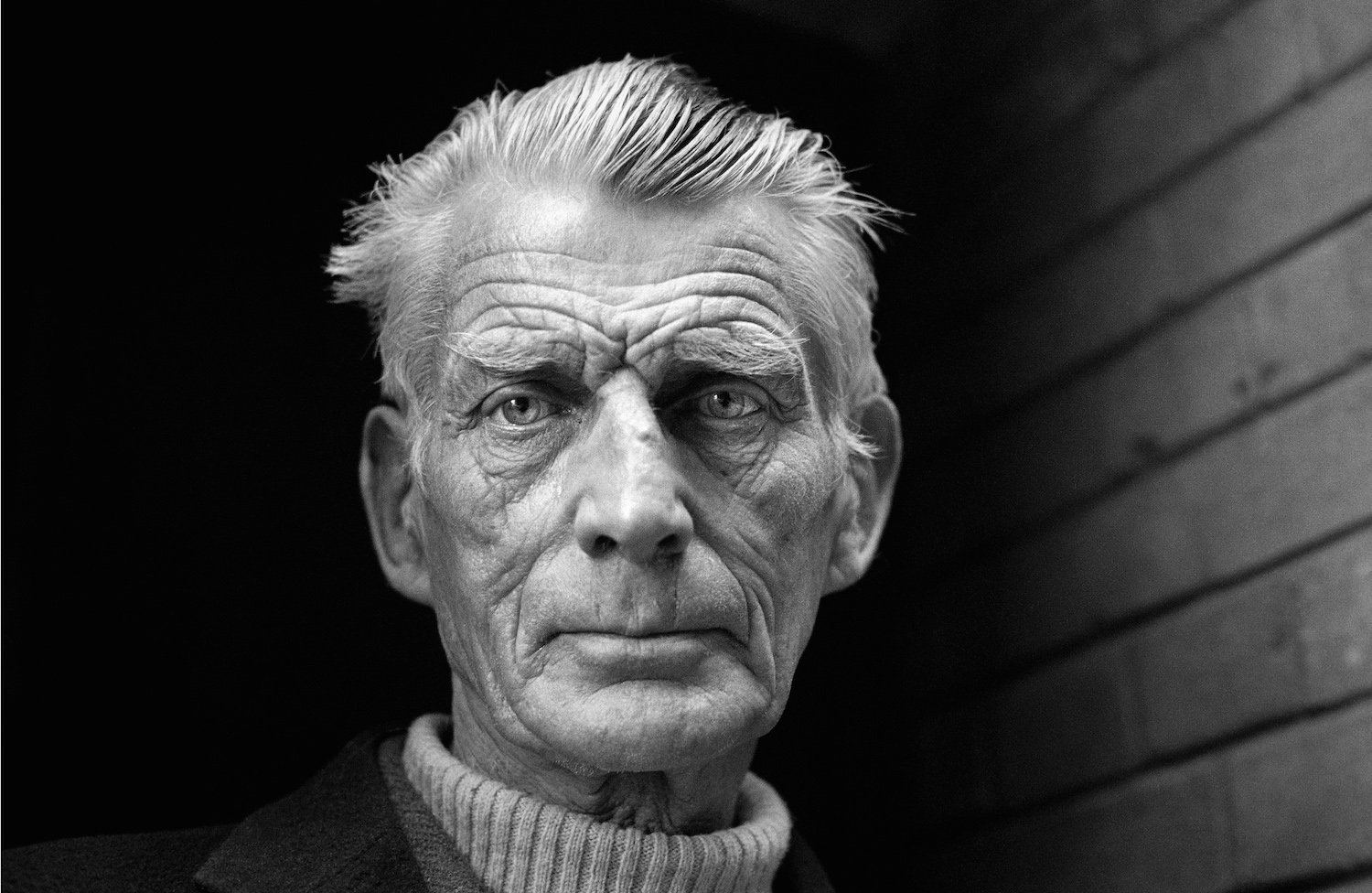 Jane Bown, who has worked as a staff photographer for the Observer for over six decades has worked in all areas of photojournalism covering everything from to catwalks to dog-shows. Bown was remarkably adept at understanding light, with certain reports citing that she could gauge the camera settings by checking how the light fell on the back of her hand rather than using a light meter. She also supposedly did little to no research on her subject before shooting them- giving her photos a fresh and non-judgemental air.

There had been no rapport between photographer and subject during Bown’s most famous portrait. Samuel Beckett, the intensely private Nobel Prize-winning playwright was described as “a mystery wrapped in an enigma.” For photographers, this made him an especially appealing subject. Bown, who had been sent by The Observer to get a portrait had initially been allowed to enter the Royal Court theatre on this pretence. However, at the last minute, Beckett changed his mind. As he tried to swiftly exit down an alleyway, Bown cornered him. Beckett, who initially tried to evade her lens, finally agreed to three shots but eventually stood still enough for her to expose five frames. 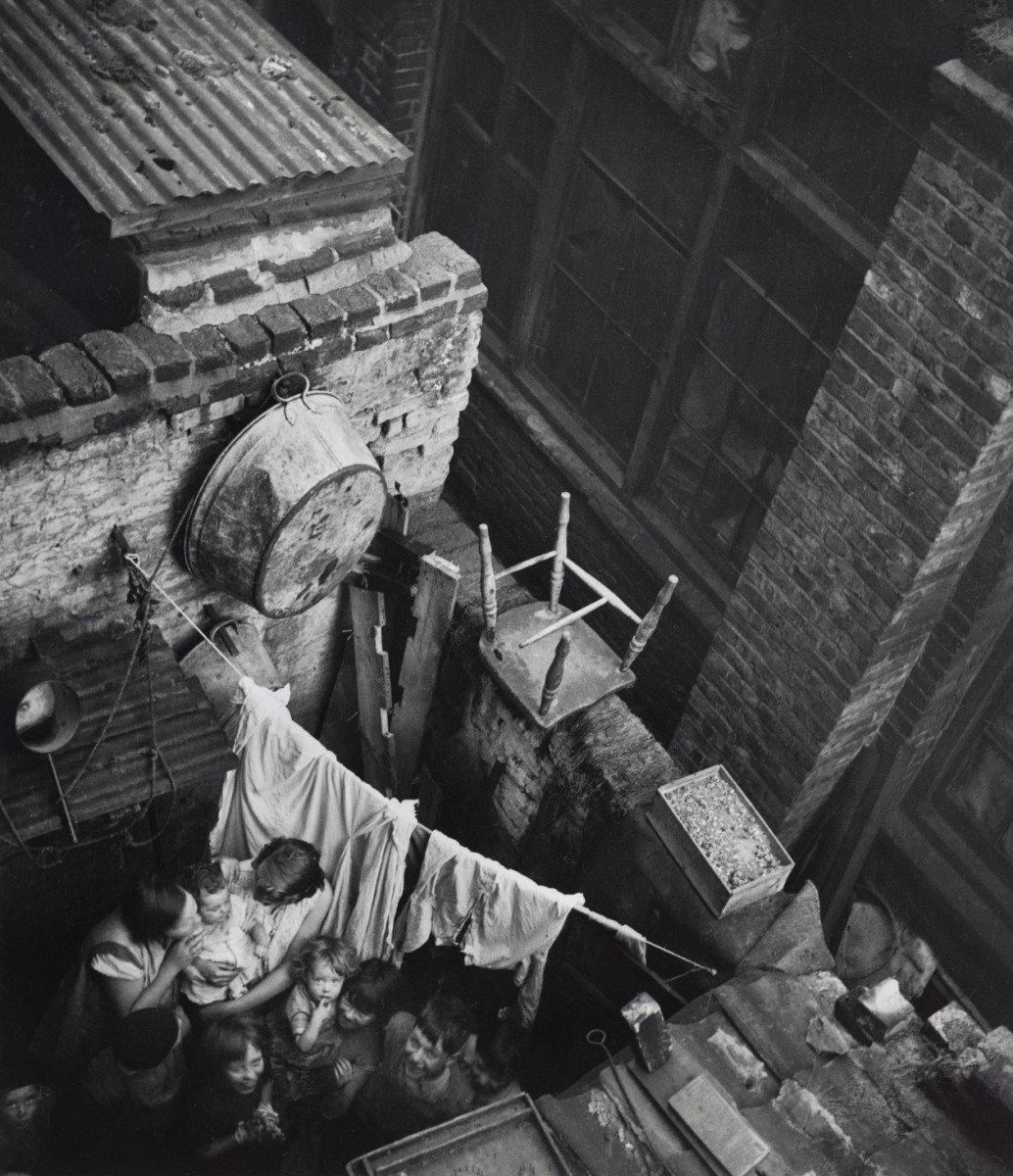 Edith Tudor-Hart (1908–73) has the most interesting story of all the photographers we have observed here. First, ‘Edith’ was her code name, and photography was not her true profession, but her hobby. A Viennese national, she had come to England to marry and remained there, but it soon became suspected – at least by covert government agencies – that she was a spy. As a secret service recruitment officer for the Soviet Union, she was a key figure behind the Cambridge spy ring at the height of the Cold War.

In a document declassified 50 years after it was written, it came to light that the British secret service MI5 subjected Tudor-Hart to round-the-clock surveillance, opened her mail, tapped her telephone, bugged her home and eavesdropped on the conversations of her friends and associates. However, it was the same qualities that made her a good agent – her unique ability to blend in, or disappear – that also made her such a great photographer. In this photo, although the subjects are aware of Tudor-Hart’s presence, we gain an insight into her background in espionage. By taking a candid shot from an upper-story building, Tudor-Hart reveals her empathy and solidarity with the British people.