Ireland’s amalgam of ancient traditions and stunning landscapes, as well as its complex and, at times volatile past, has drawn some of the greatest from across the photographic spectrum to its rugged shores; the images they have captured stand as a testament to the enigmatic beauty, and unique essence of the Emerald Isle. 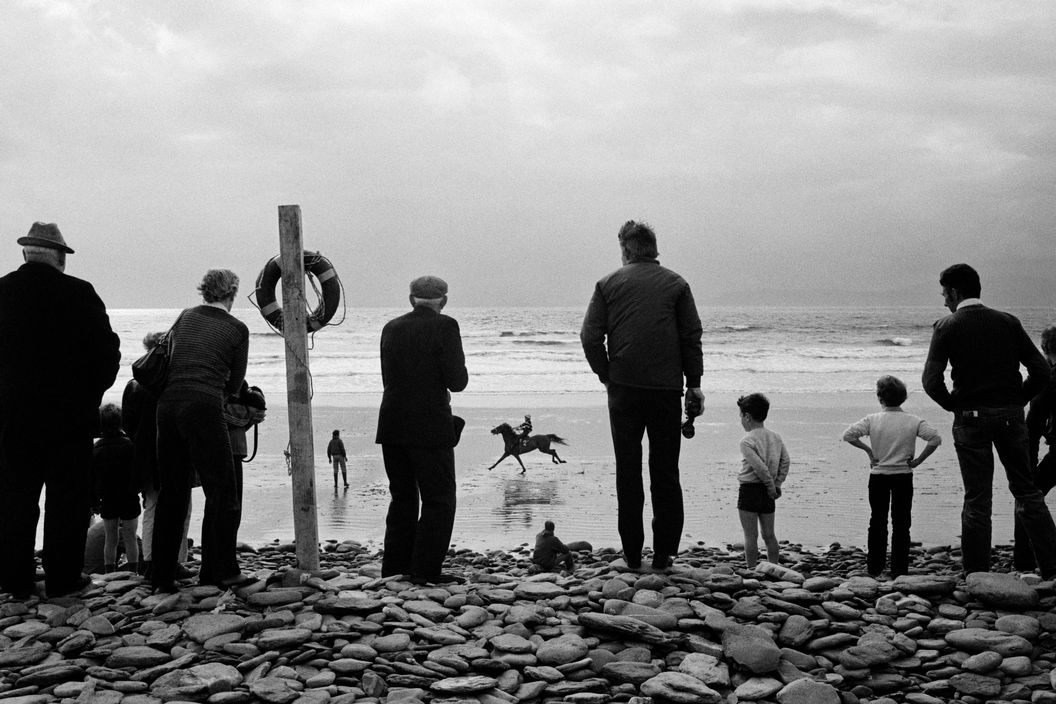 Martin Parr’s third book, A Fair Day, is a fascinating portrait of life in the west of Ireland during the early 1980s. The cover image, as with the remainder of the series, is entirely monochromatic, in contrast to the brightly colored, sometimes garish aesthetic of his usual work; in spite of this, it still retains the playful eccentricity for which he is renowned. Brimming with juxtaposition, Parr presents a society gradually transitioning towards modernity, though one in which deeply entrenched traditions remain central to everyday life. 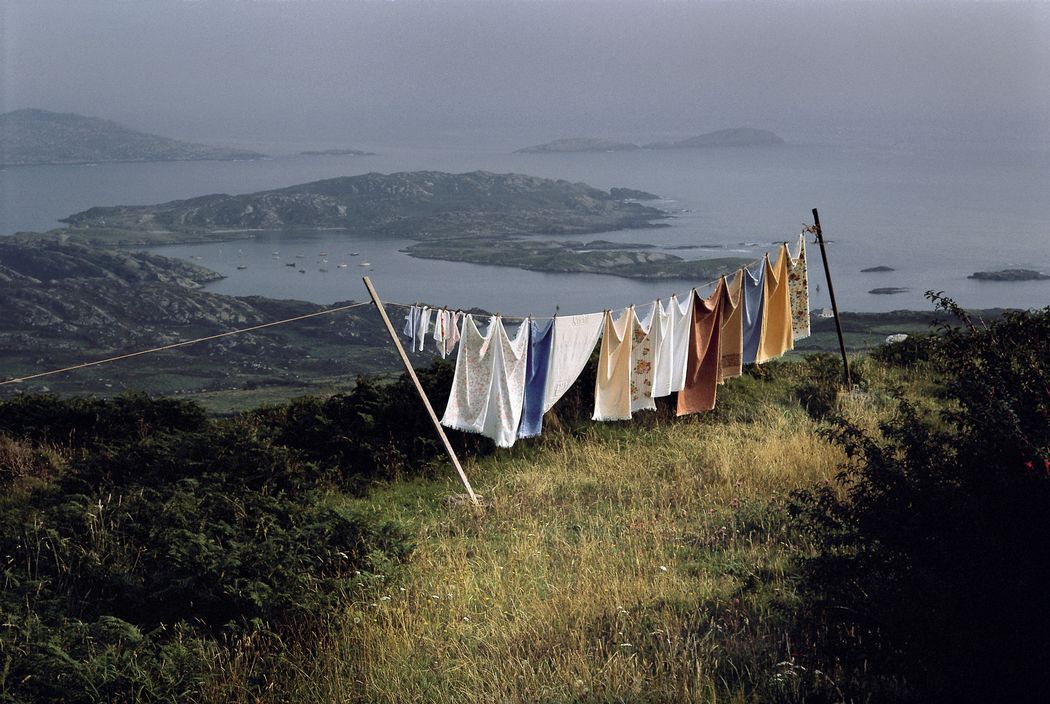 Renowned for his innovative use of color which was instrumental in him winning the Kodak prize in 1976, Belgian born Magnum photographer, Harry Gruyaert‘s depiction of Ireland’s western coastline, forms part of his Rivages series, documenting the places around the world where land meets the ocean.

A thoroughly arresting image that epitomizes the wild beauty of the region and indeed of Ireland as a whole, his trademark use of color is evident both in the pastel tones of the washing and the lush green of the grass, whilst the seemingly boundless ocean fades into the distance until it becomes indistinguishable from the sky. 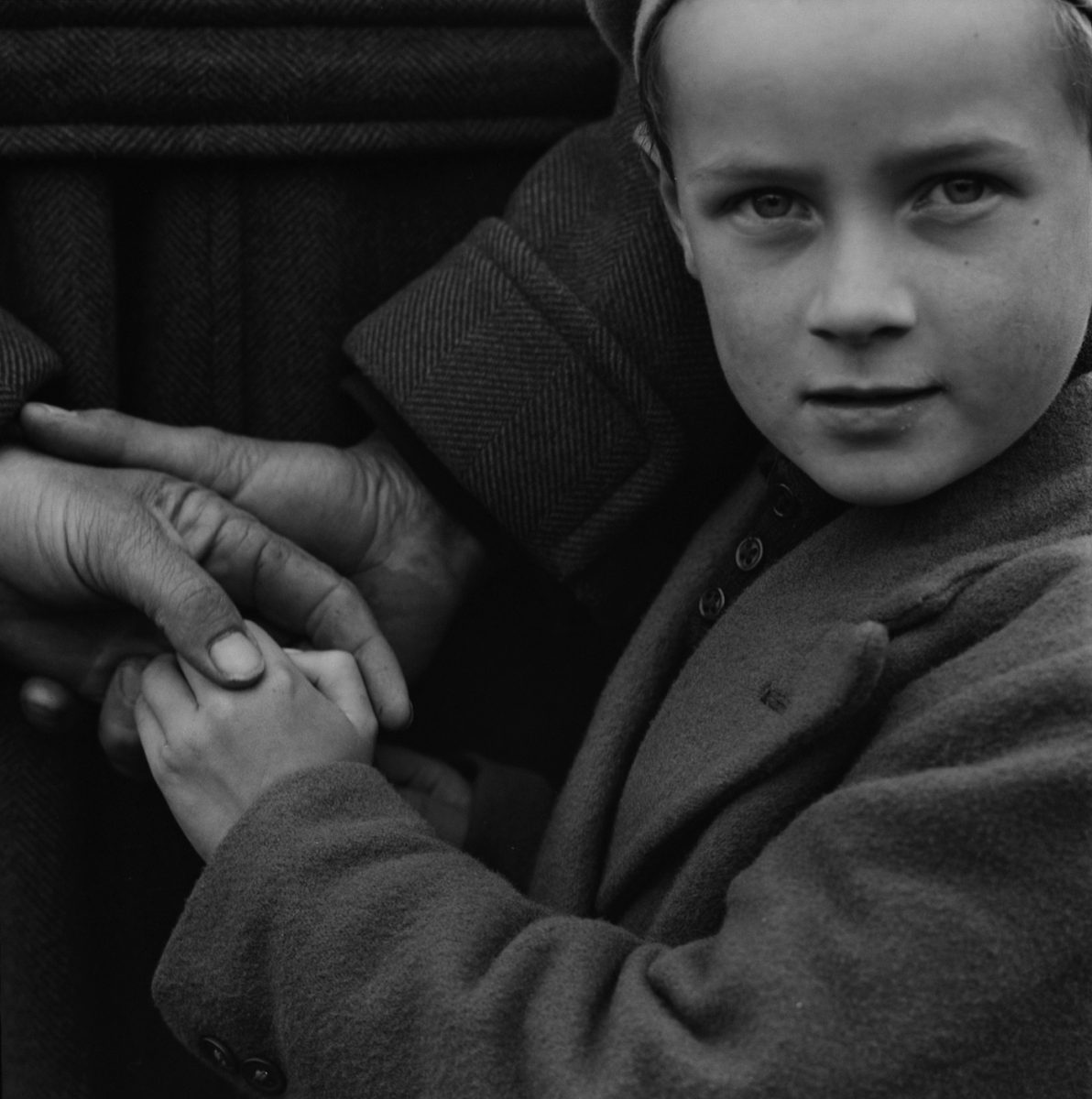 Dorothea Lange was undoubtedly one of the greatest photographers ever; her powerful depictions of depression-era America captured the zeitgeist of the period and dramatically influenced documentary photography thereafter. She visited Ireland in late 1954, on assignment from Life Magazine, her subject, the humble farming communities of the country’s remote western plains. The resulting photo-essay, ‘Irish Country People’ exemplified in this arresting portrait, represents some of her finest work, epitomizing both the striking candor and remarkable artistry for which she is renowned. 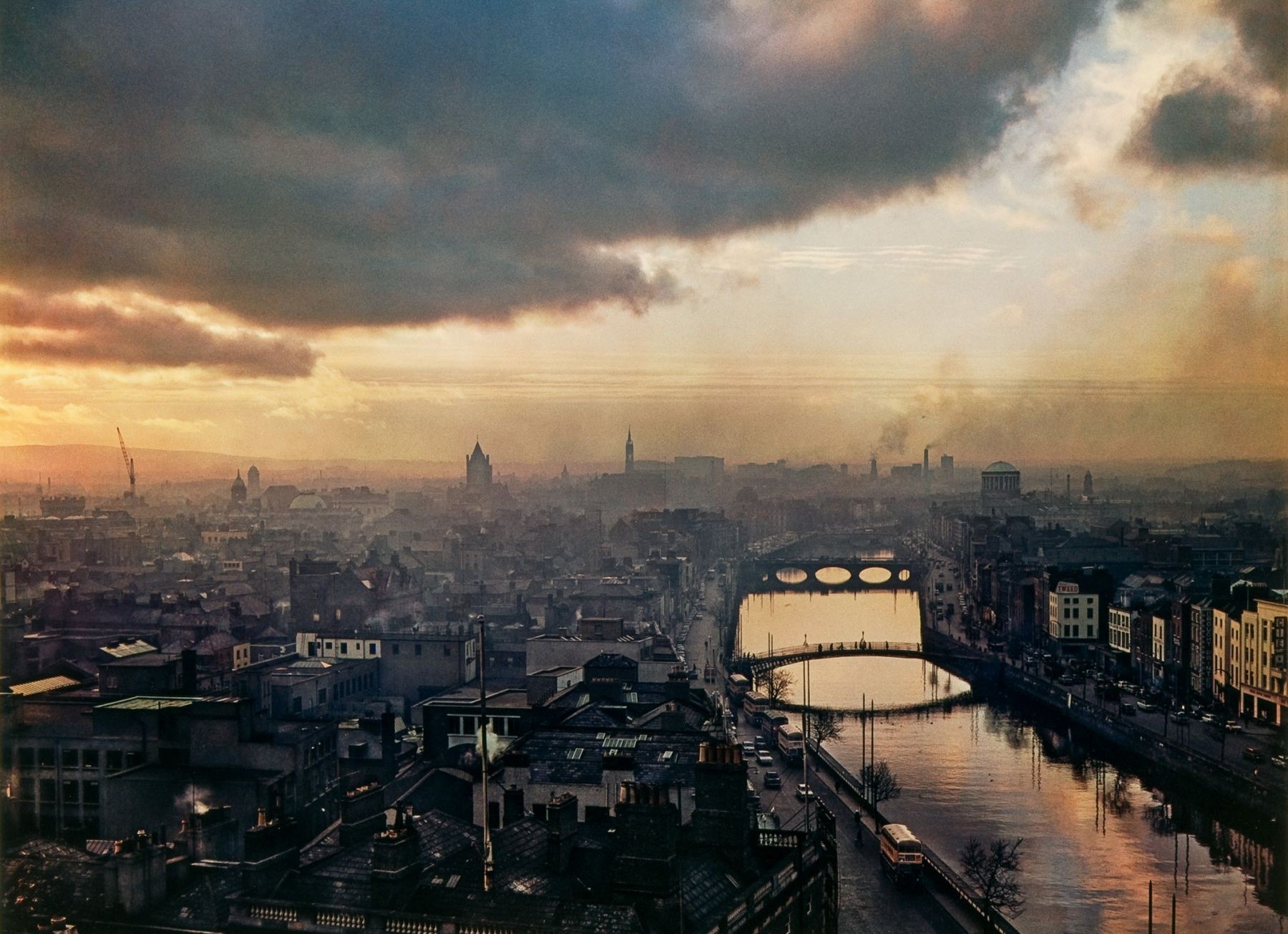 © The Estate of Evelyn Hofer

Few, if any photographers in history captured the essence of a city in the manner of Evelyn Hofer, the enigmatic German-born photographer who, throughout her impressive career, traveled the world photographing its landscapes and people.

Perhaps the most beautiful representation of Ireland’s capital ever created, Dublin Sky, is typical of Hofer’s work, possessing a painting-like quality indicative of her interest in the medium, and an elegant composure that defined her approach.

Henri Cartier-Bresson, the father of photojournalism, considered by many to be the greatest photographer of all time, visited Ireland in 1952 on assignment from Harper’s Bazaar and traveled throughout the country, capturing the vitality of Irish life with a brilliance that typified his work. His image depicting spectators at a horse race (a sport for which Ireland has a proud and storied heritage), in County Munster, is perhaps the most iconic, exemplifying his ability to convey the essence of a scene in a single image. 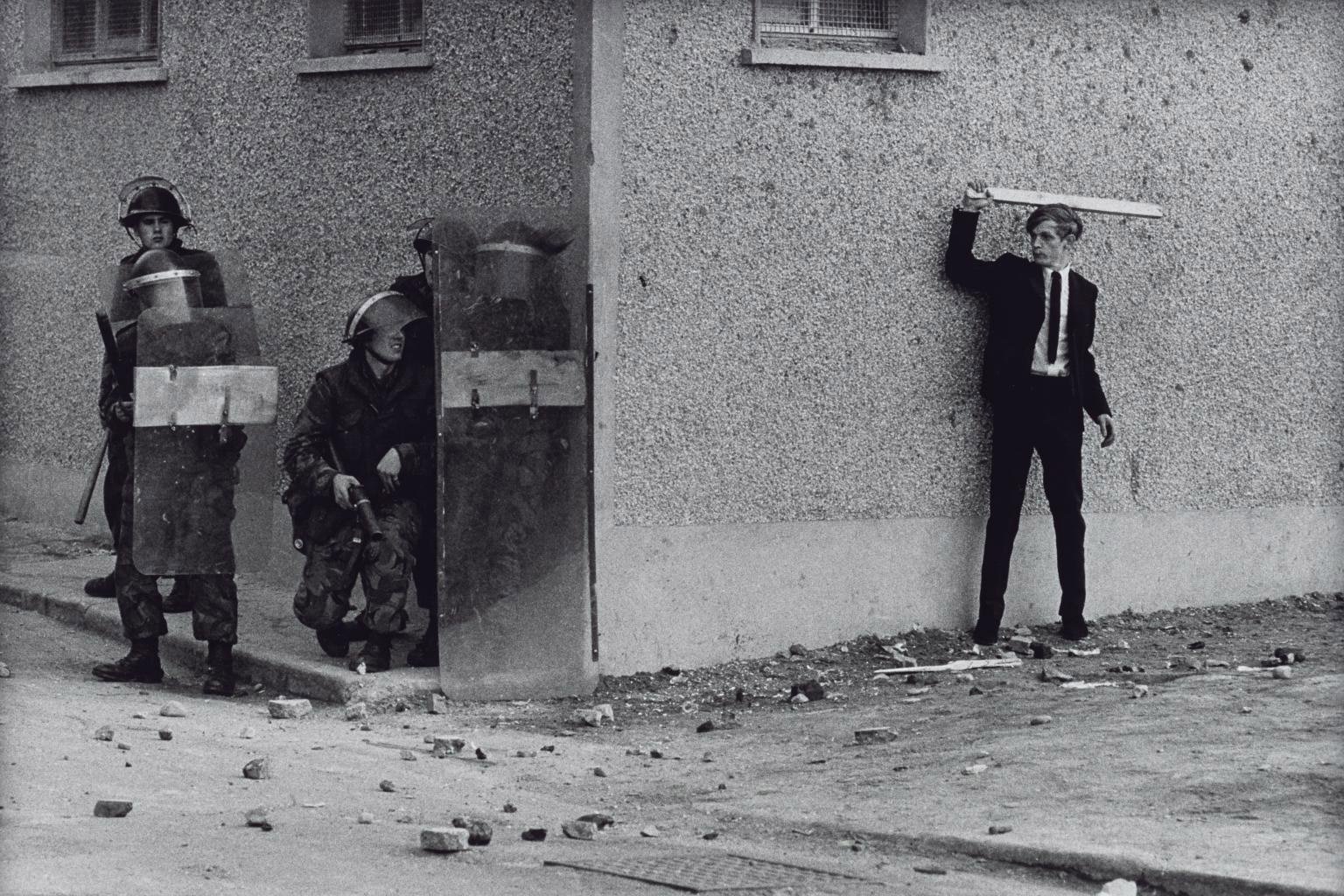 Throughout his outstanding career, British photojournalist Don McCullin has captured the complexities of war with remarkable honesty, exemplified in the images of the troubles he took whilst on assignment for the Sunday Times Magazine in 1971.

Published as the first of a three-image sequence, this is undoubtedly one of the most profound,  the contrast between the heavily-armed soldiers, and the lone, stick-brandishing young man, encapsulates the somewhat paradoxical nature of the conflict. 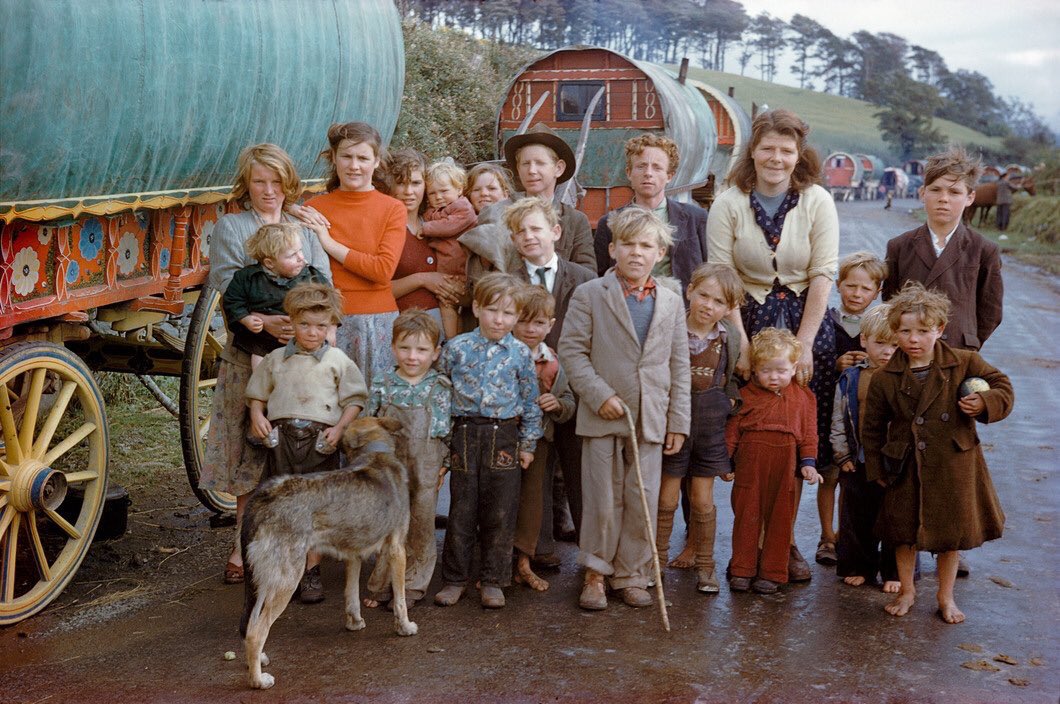 Much like Cartier-Bresson, with whom she apprenticed during the early part of her career, Inge Morath was, at her core, a humanist photographer, and remains one of the most influential figures in the history of the medium.

A gifted writer and linguist, she traveled extensively throughout her career, forming close relationships with the places she visited through her absolute immersion in the local culture. In 1954 she traveled to Ireland and spent much of her time in Killorglin, a small, remote town in the west of the country and a place permeated with ancient Gaelic traditions. It was here she captured this striking image of a local traveler family, perhaps the most iconic of the group ever created, and one that embodies the sincerity, and mastery that characterized her work. 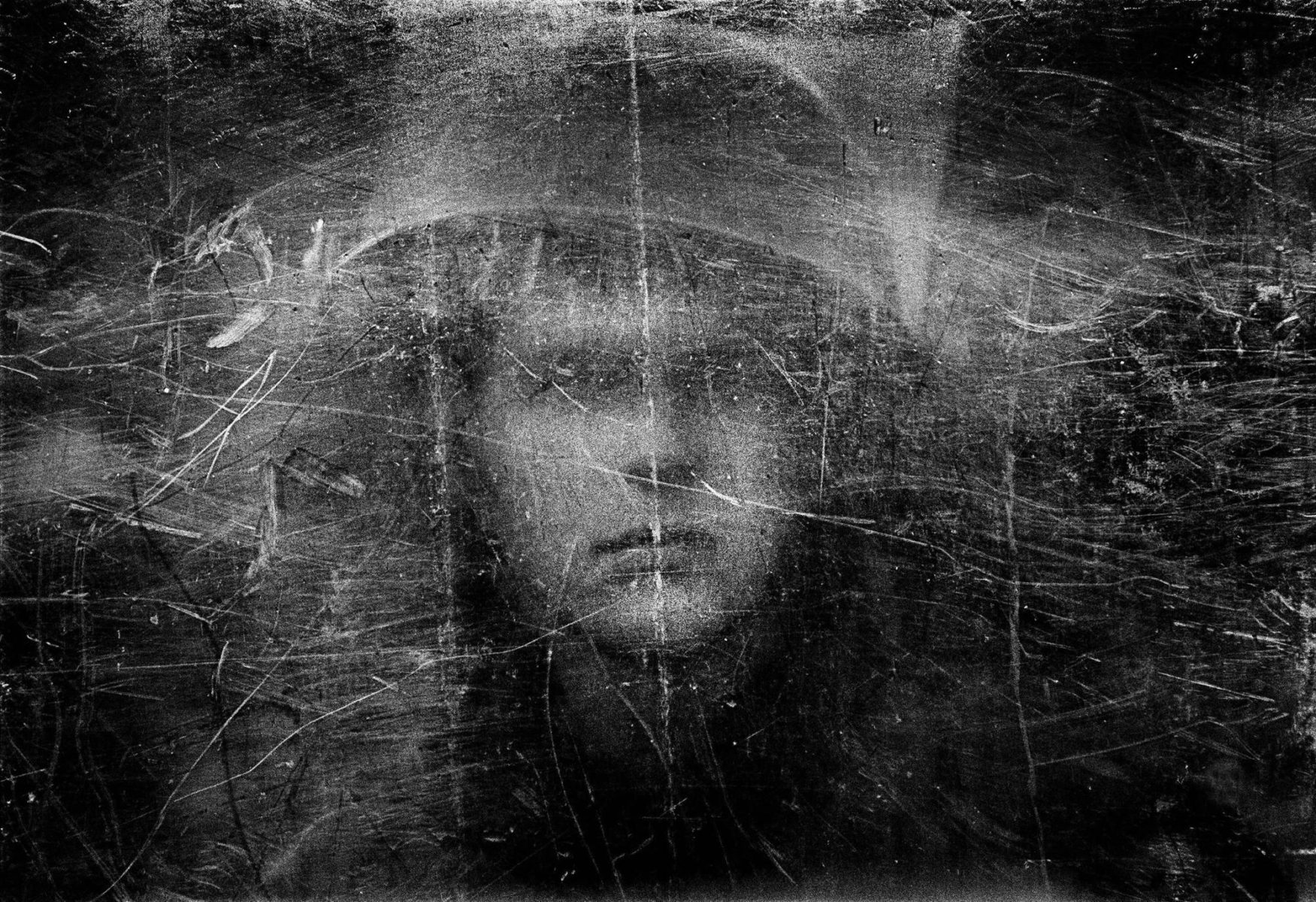 “Not since Goya has anyone portrayed war like Philip Jones Griffiths”

Renowned for his honest and compassionate images of war, Welsh photojournalist Phillip Jones Griffiths invariably focused on the human cost, exemplified in his remarkable images of Northern Ireland during the height of the troubles. His depiction of a British soldier, his obscured face appearing ghost-like through his heavily scratched riot shield, is undoubtedly one of his most compelling, and acts as a profound and somber symbol of the conflict.

The economic boom which engulfed Ireland from the early 1990s was remarkable, transforming the country from one of Europe’s poorest to one of its richest. During this time, thousands of new housing developments were built, but, in 2008, the global recession struck, causing soaring levels of unemployment and leading to mass emigration. Consequently, many of the developments were left empty, and came to be known as ghost estates, haunting symbols of the economic crisis.

In 2010, multi-award-winning Irish photographer, Kim Haughton documented these empty and often unfinished homes in her Shadowlands series, and though Ireland’s economy has since stabilized, and the majority of the homes are now occupied, this arresting image serves as a troubling reminder of the fragility of the global financial system.

A major figure within the humanist movement, Magnum photographer Martine Franck, spent her life traveling the globe, documenting those living on the fringes. In 1993, she was compelled to visit Tory Island, Ireland’s most remote inhabited region, wild and sparsely populated, yet rich in culture and tradition. She returned in 1997, and again in 2000 when she captured the islands rugged coastline during a storm. A striking image, rich in monochromatic contrast, and outstanding in composition, characteristics typical of Franck’s work; it is emblematic both of the Islands tempestuous beauty, as well as the defiant spirit of its people.