From Tokyo to its surrounding prefectures, a book recently published by Chose Commune reveals the Japanese photography master’s striking world, immersed in urban energy and a playful observation of people that distill it.

Daido Moriyama’s coal-textured photographs bluntly depicting urban life have imprinted a signature on Japanese photography. Joining the magazine Provoke early on, Moriyama has contributed to defining what was by the time considered the new photographic expression, along with many artists of his generation. Yet, the Japanese photography scene is far more complex and diverse, including photographers such as Masahisa Fukase and Issei Suda, both of whom restlessly experimented and documented with their camera. 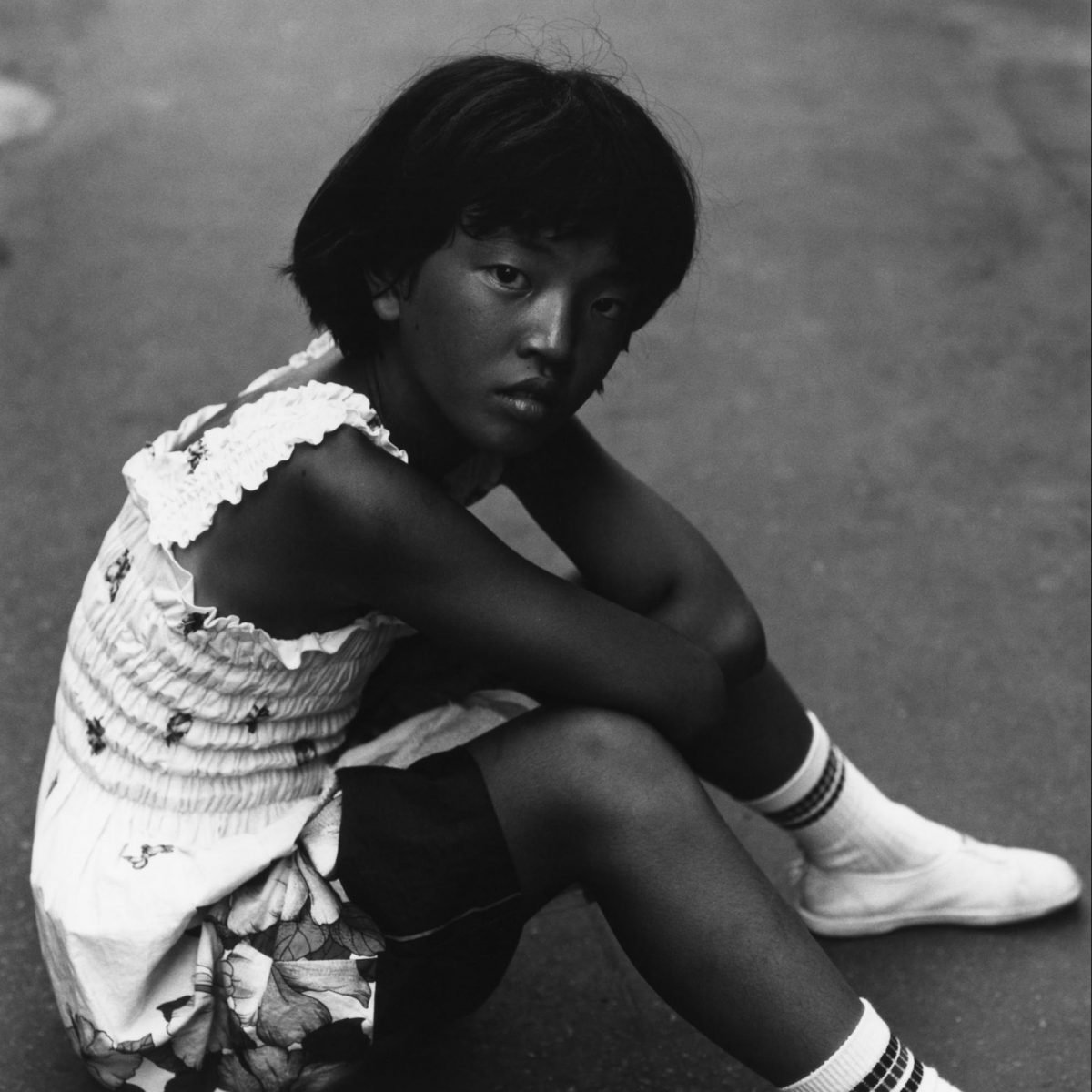 While Suda died a few months ago, he left with a promise to Cecile Poimboeuf-Koizumi, co-founder of Editions Chose Commune, to publish a book of his lesser-known work. Prolific as he was, his home is sinking under boxes of archives that Poimboeuf-Koizumi carefully explored, putting together a selection that draws a portrait of Tokyo and its surroundings as much as of the photographer himself.

The result was recently published, with the printing quality that the publisher has gotten us used to, shedding light on Suda’s mastery of light. 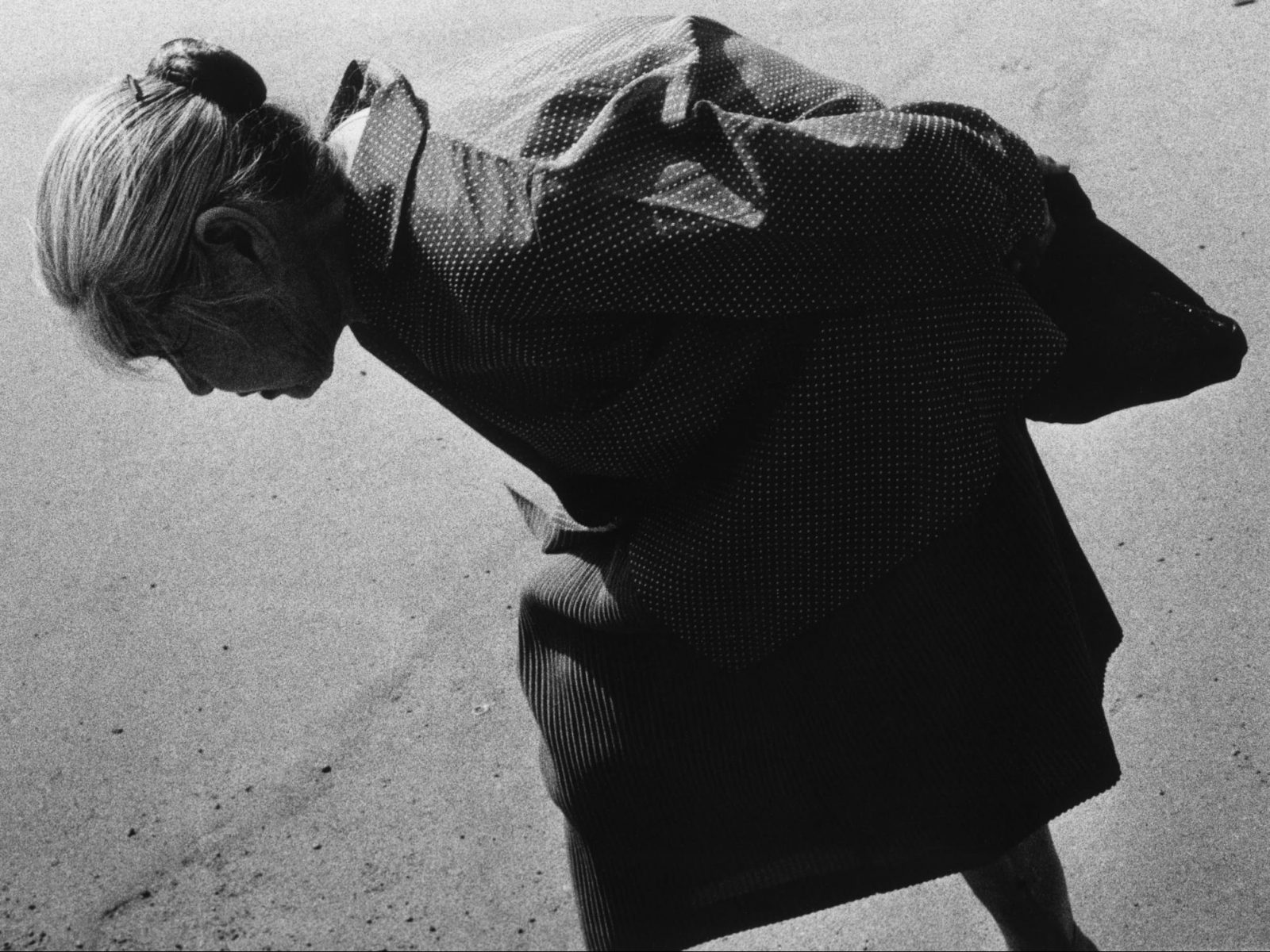 Going through the photographs, the focus on movement is striking. Each character captured by Suda seems in the midst of a choreography, both individually and as a group of bodies interacting with each other. An old lady so curved by the years that she seems to curtsy the floor; groups of friends walking in the streets whose bodies are fragmented in independent parts by the light; hair twirled by the wind echoing the comb of feathers of the bird sitting on a woman’s shoulder. Gestures are so vividly expressive they seem posed.

The sequencing of the book – titled “78” as a reference to both the number of photographs it brings together and to the age at which Suda died – emphasizes this aspect of the photographer’s work. Even static objects like wall paintings, umbrellas, trees, and carts join the dance. No doubt Suda sharpened this subtle skill at the beginning of his career, in 1967, working as a stage photographer and documentarist of the avant-garde theatre group “Tenjo Sajiki,” a troupe directed by poet-playwright Terayama Shuji.

Trained on the stages of theater too, Suda’s eye for costumes is captivating. For many years, he traveled in Japan from festival to festival to document folkloric traditions before they disappear. And when in the street of his own city, he brought the same attention to accessories. In this book, they unravel by touches the scope of Tokyo’s motley social fabric – the paint-stained jacket of the worker, the silk kimono of the elegant lady, the ruffle dress of the schoolgirl, the apron of the cook, the shorts of the fisherman, the tweed suit of the businessman. Combined with motions, the outfits reveal the true nature of Suda’s random encounters. Their attitude and surroundings come together to tell a unique story – they are not stereotypes but individuals in the most intriguing way. 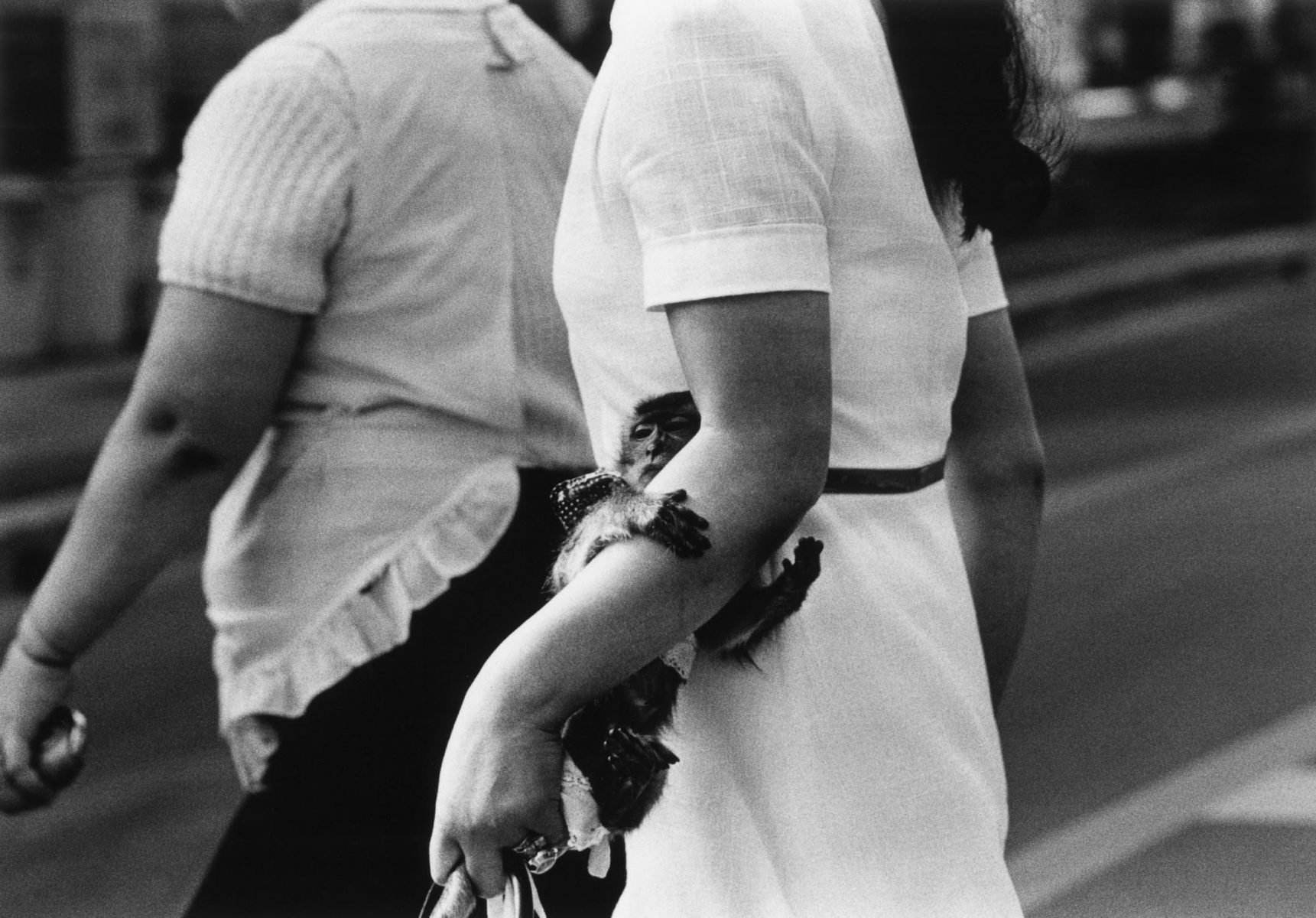 Despite their precision, never are Suda’s photographs pretentious. They render the ordinary, dotted with a mystery that may as well be the generosity and curiosity of the photographer himself. That hint at extraordinary is what makes Suda’s photographs so captivating. While they give a sense of an era – most photographs from the selection were shot in the 1970s in Tokyo and the capital’s surroundings -, the images crystalize scenes that would otherwise have gone unnoticed, that very moment when patterns and gestures form another image. 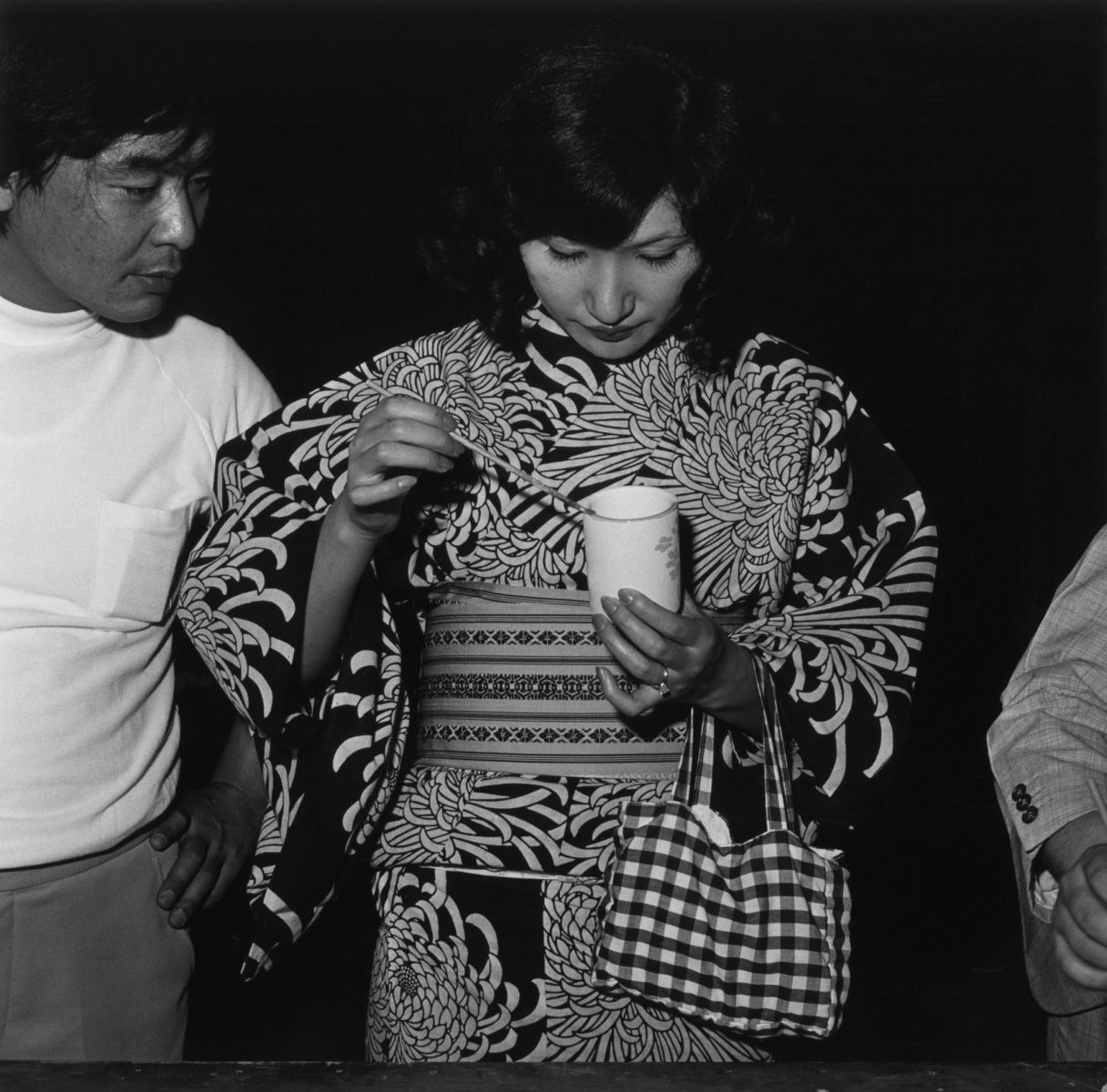 Carefully rejecting from the frame everything deemed unnecessary and likely to divert from the remarkable essence of his subjects, Suda improvises with the theater of every day. So much so they at times seem playful – a man chatting at a window, his head covered by the curtain as if hiding; siblings using large leaves as oversized hats; hands passing glasses, cups, and pots as in an illusionist trick; a delivery man with a bouquet of flowers as large as his bike.

The flowers, that also serve as a motive for the cover of the book, could be seen as a reference to Suda’s first personal series, “Fûshi Kaden”, that literally means “the transmission of the flower of acting style” and refers to a theatrical process consisting in the creation of a new apparition through the performing act. 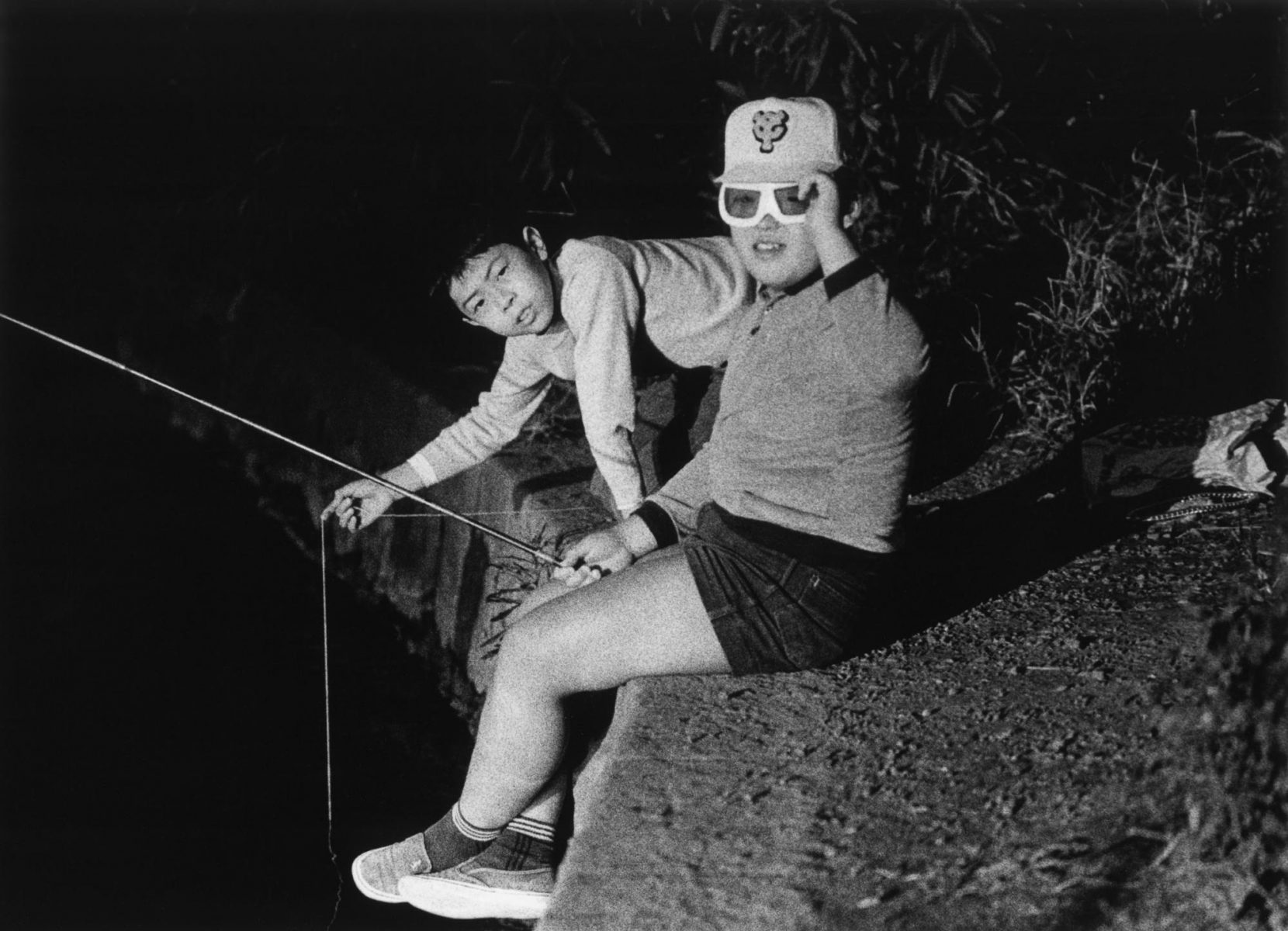 Losing ourselves in Suda’s unusual views of everyday life, framing reality to make it look appealingly unusual, one can only think that he had appropriated the concept to photography and developed it throughout his entire work.