“It’s a search for the somber truths about the inevitability of loss, the shame of inaction, and the heavy burden of guilt left in climate change’s now-ineludible path. It’s a love letter and a eulogy to a place that will soon be as spectral as the very memories of it.” – Bryan Thomas

Captured over the course of a two year period, The Sea in The Darkness Calls, the ongoing series by award-winning NYC-based photographer, Bryan Thomas, is a poetic visual ode to his native Florida, a state which, due to a dramatic sea levels rise, could be more than 9% underwater by the year 2100.⁠ 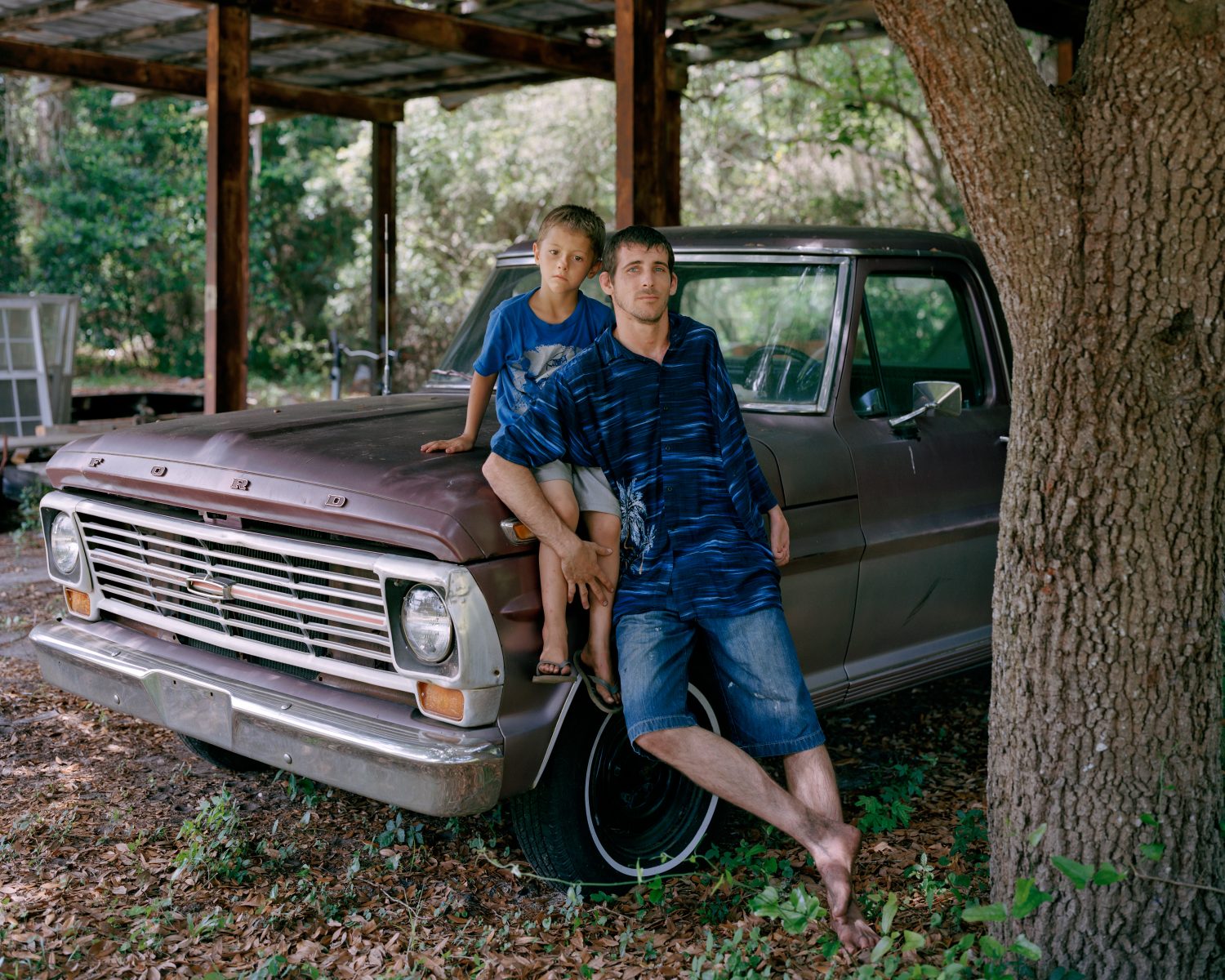 RJ Bailey and his uncle, Wayne Bailey, Carrabelle, Florida, a city where the once renowned oyster industry has been decimated by drought and rising sea levels caused by climate change.

BT: The Sea in the Darkness Calls is a travelogue along the coast of a Florida suddenly and psychically charged by the shadow of irreversible climate change. In 2015, the year following the discovery that the decline of the West Antarctic Ice Sheet (WAIS) had “reached the point of no return,” (1). I began traveling beside the more than 1,300 miles of Florida’s coastline to survey how Florida had been changed by its own inescapable future. 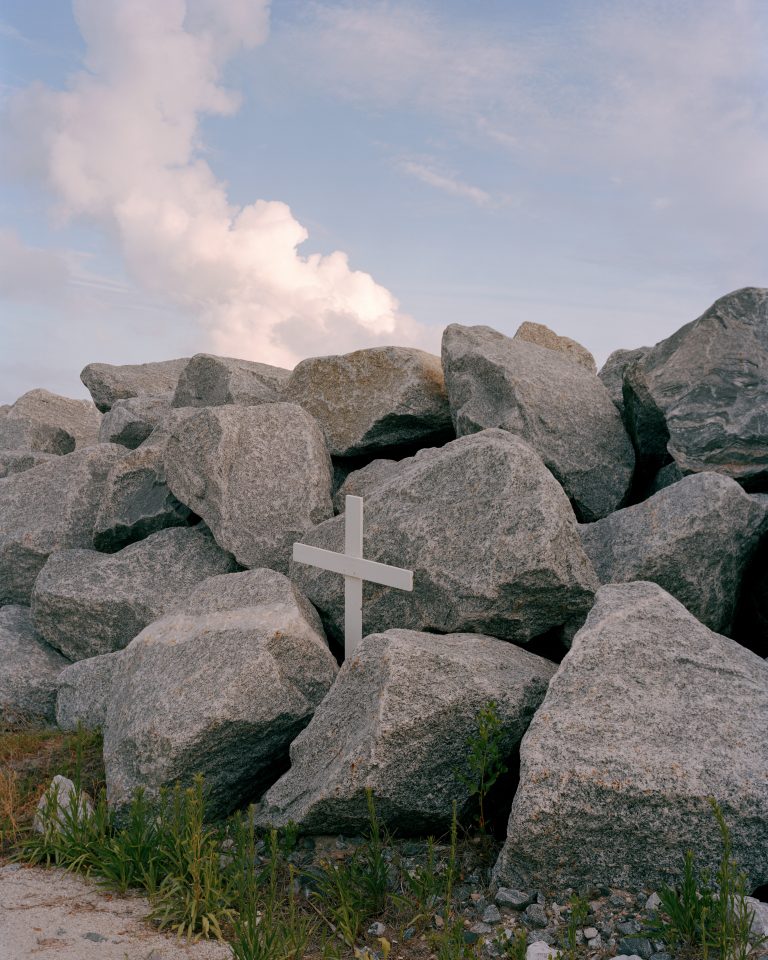 A cross in a seawall on the fast-eroding shoreline of Cape San Blas. 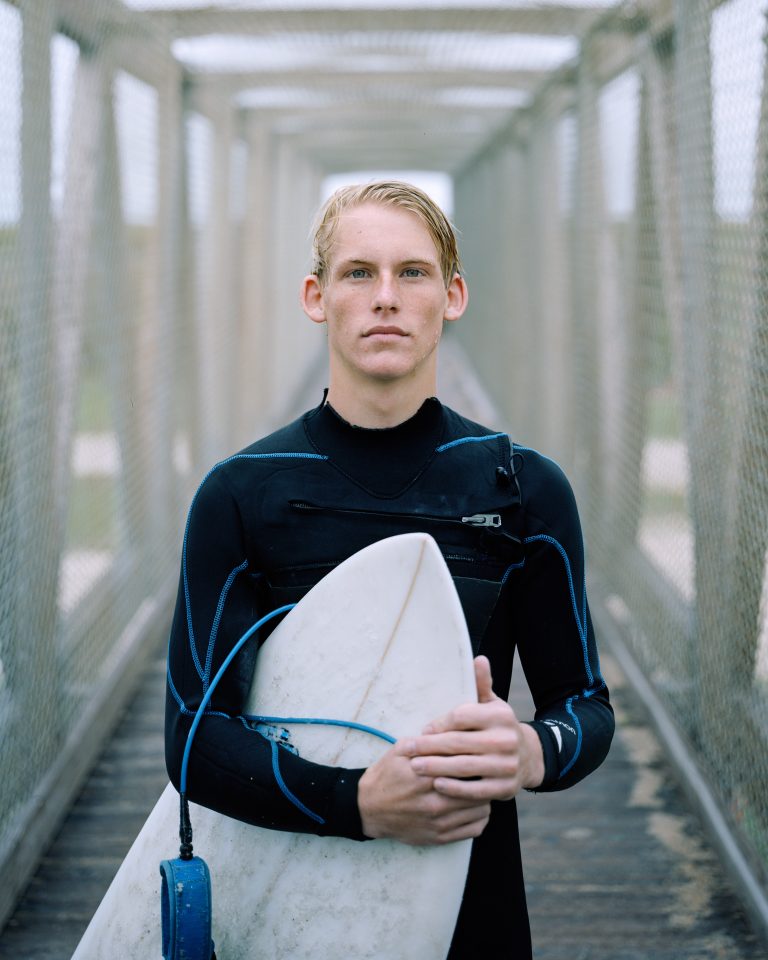 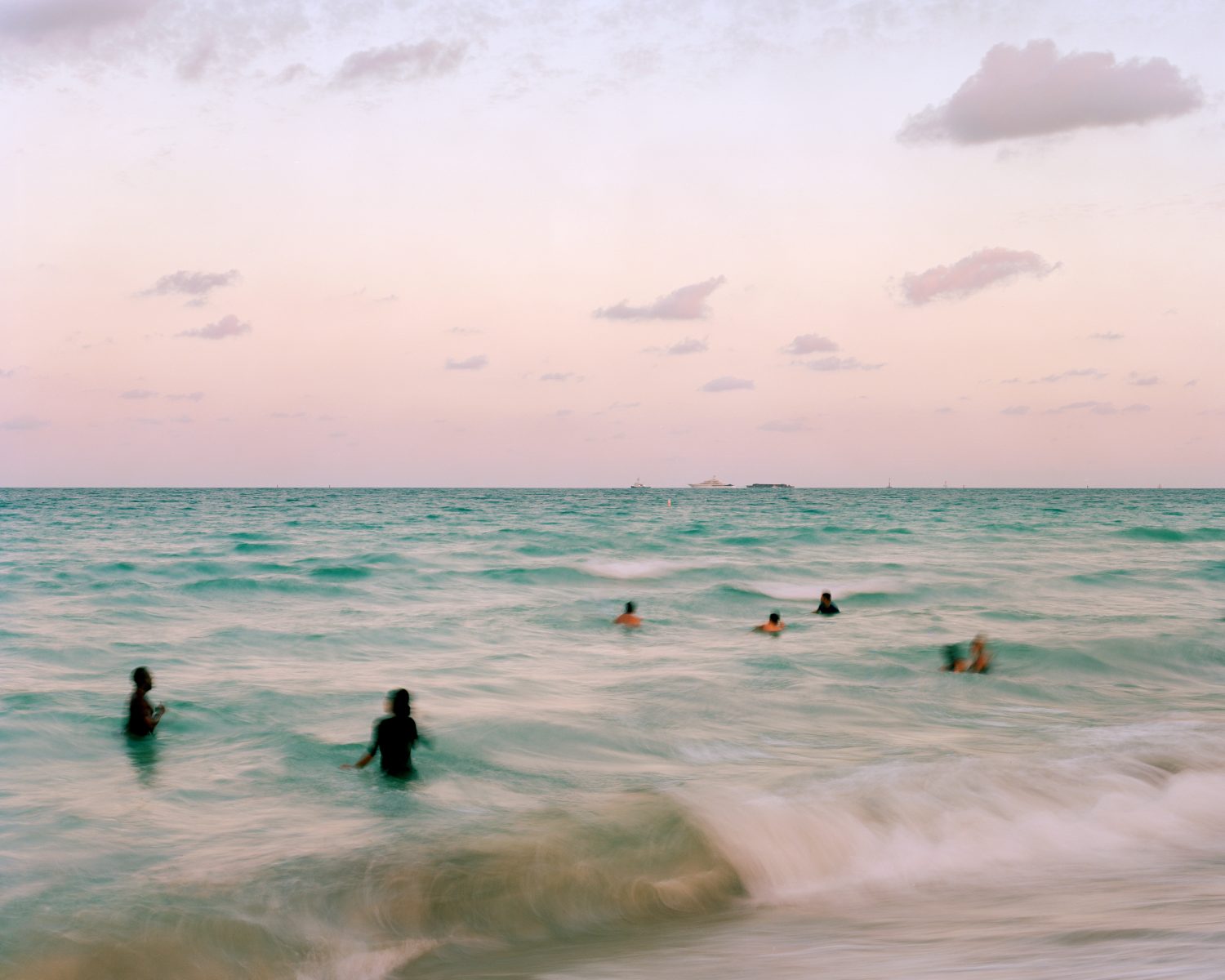 People play in the Atlantic Ocean in Miami Beach, Florida.

BT: In a state where three-quarters of Florida’s 18 million residents live within coastal counties that generate almost four-fifths of its economy, (2) how does life continue, let alone thrive, in an environment whose future has been so gravely foretold? Climate change and sea-level rise were once slow-motion disasters whose timelines were difficult to comprehend and easy to casually deny. But now, given the certainty of the WAIS’ decline, one of nature’s most destructive forces has finally arrived and there is little that can be done about it. 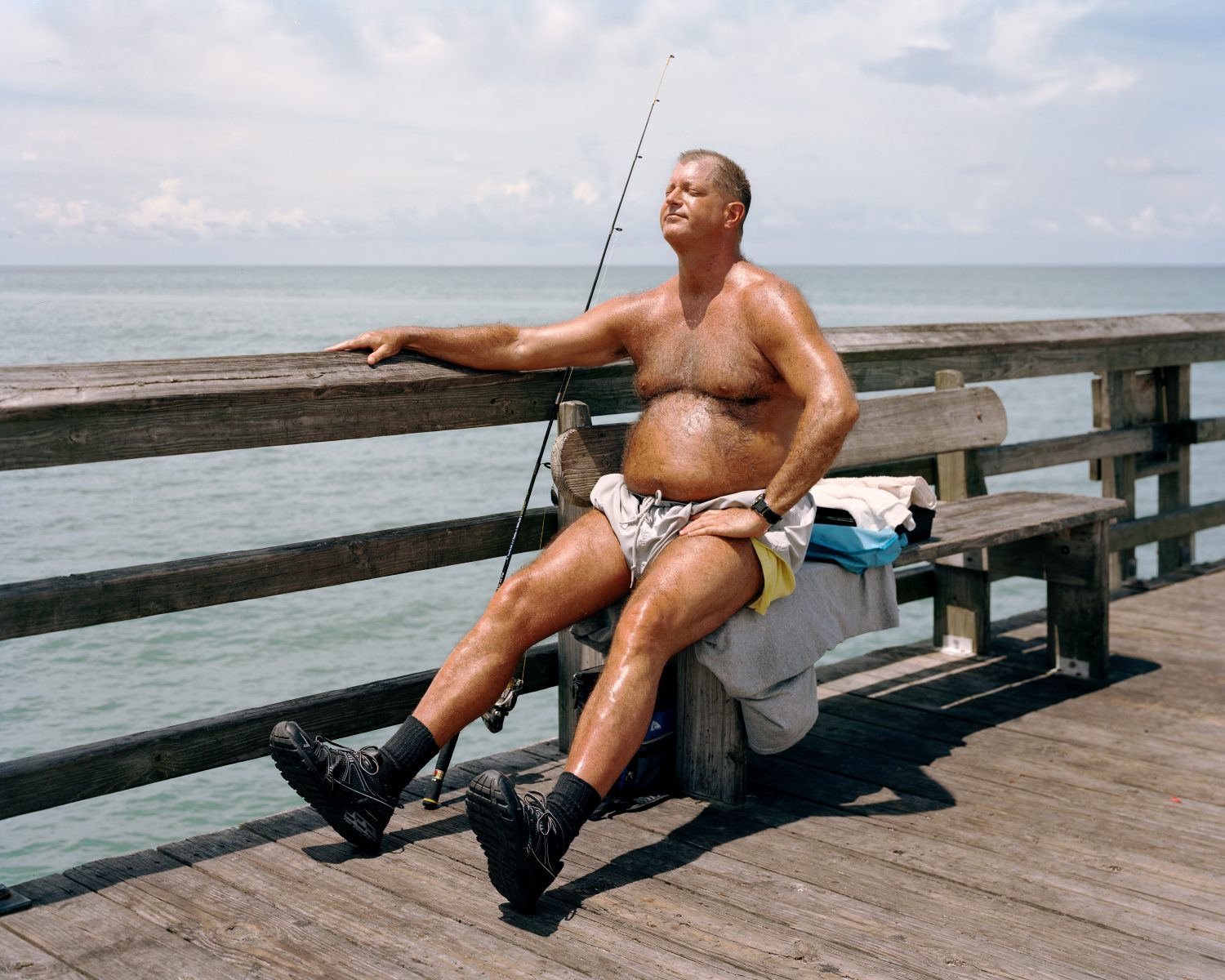 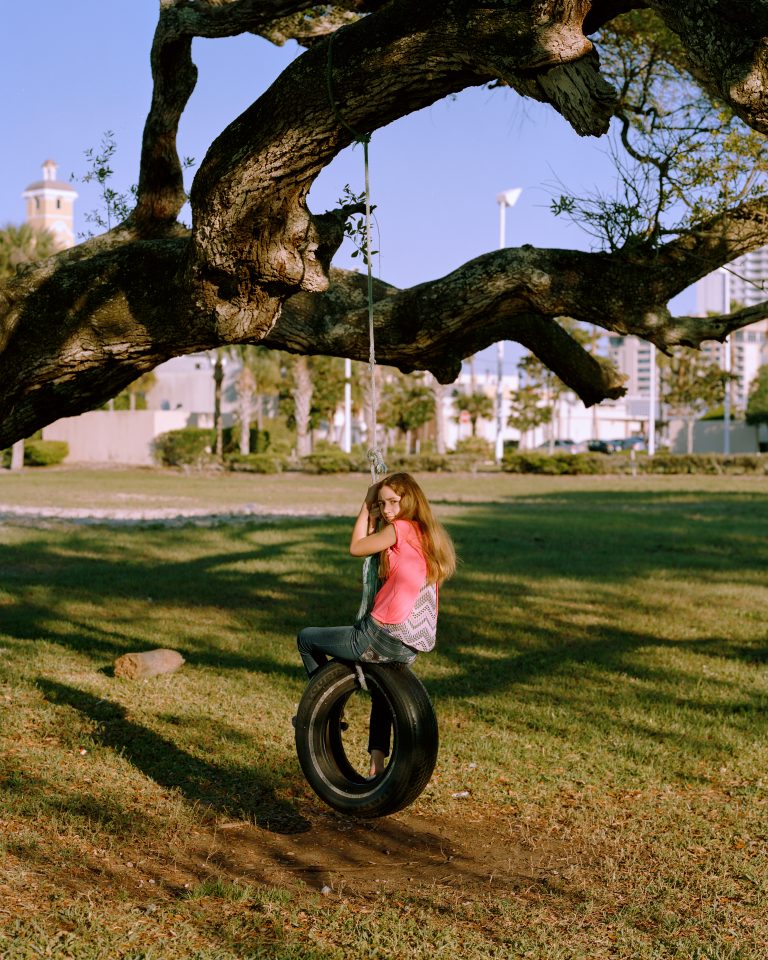 A girl hangs on a tire swing in Daytona Beach, Florida. 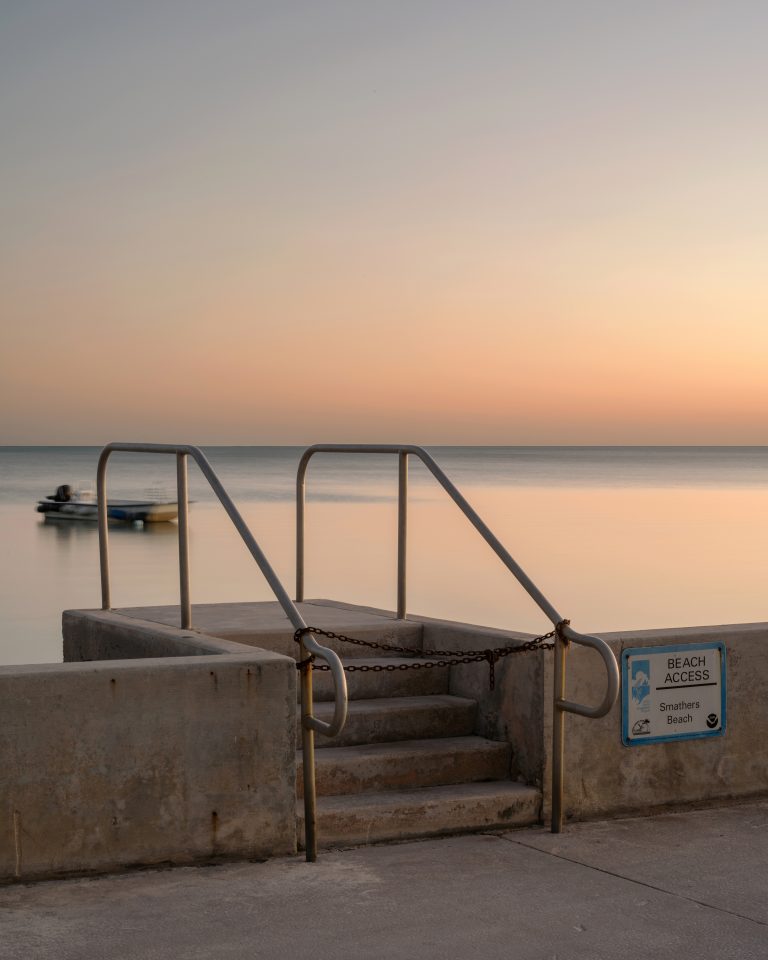 Stairs lead into the water in Key West, Florida.

BT: The collapse of the destabilised ice sheet—along with the many additional factors contributing to sea-level rise—could raise global sea levels by as much as 6 feet by 2100, (3) causing Florida’s population living below sea level to increase to 2.39 million. (4) As long as humans have stood along the shore, staring toward the horizon, they have felt fear but, often, possibility. Now there is only fear. We no longer look across the ocean. We wait for it to come to us. 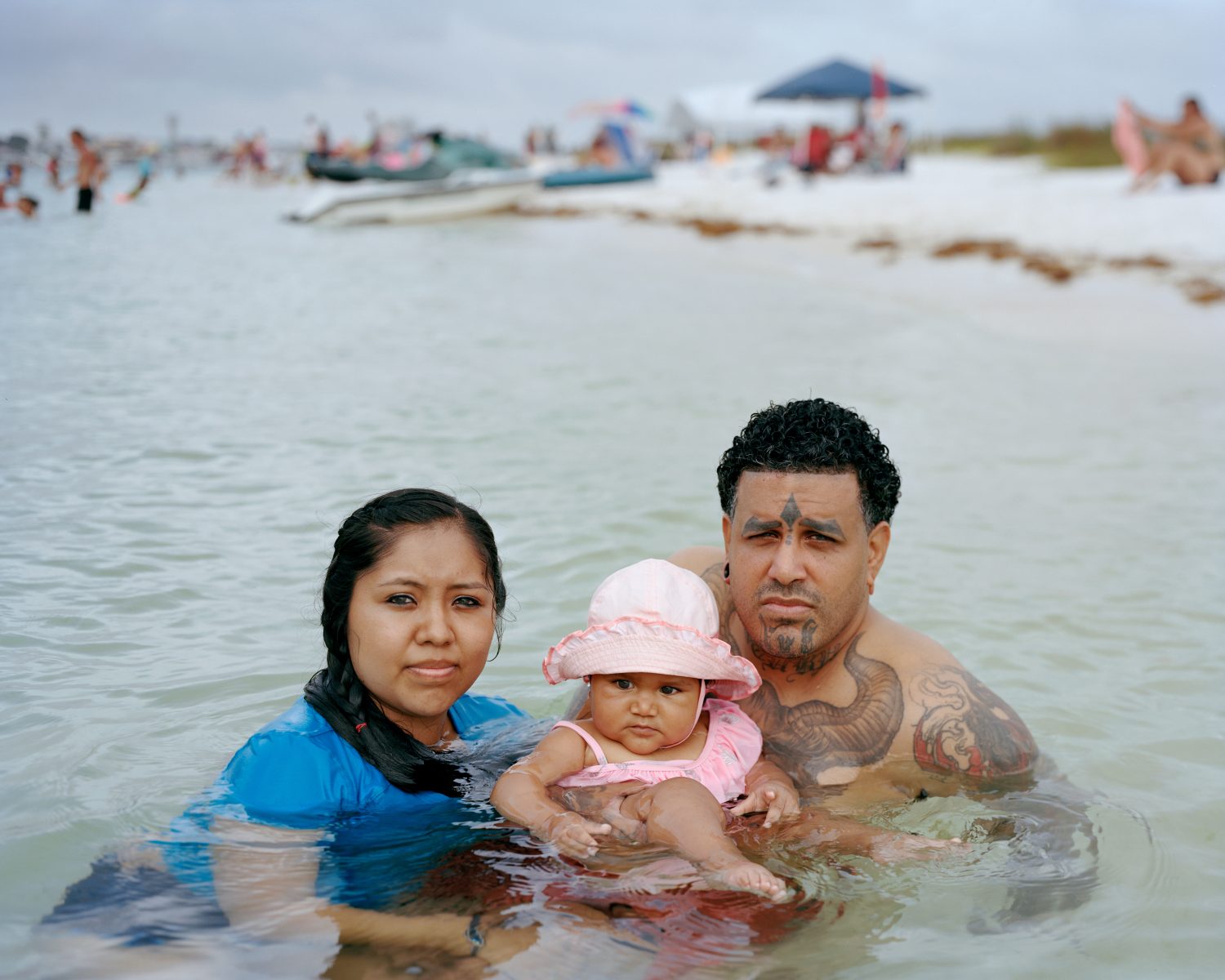 Esmeralda Garcia, Kali Cedeno, and Anthony Cedeno in Destin, Florida, a city which, due to sea level debt (the long-term sea level rise that we cannot avoid) is predicted to be 50% underwater by the year 2070.

BT: Given climate change’s newfound inevitability, depicting climate change isn’t just about showing that it exists (it does) and has affected our lives (it has), it’s also about using photography to understand how the irrevocable state of environmental decline has changed us emotionally and psychologically. 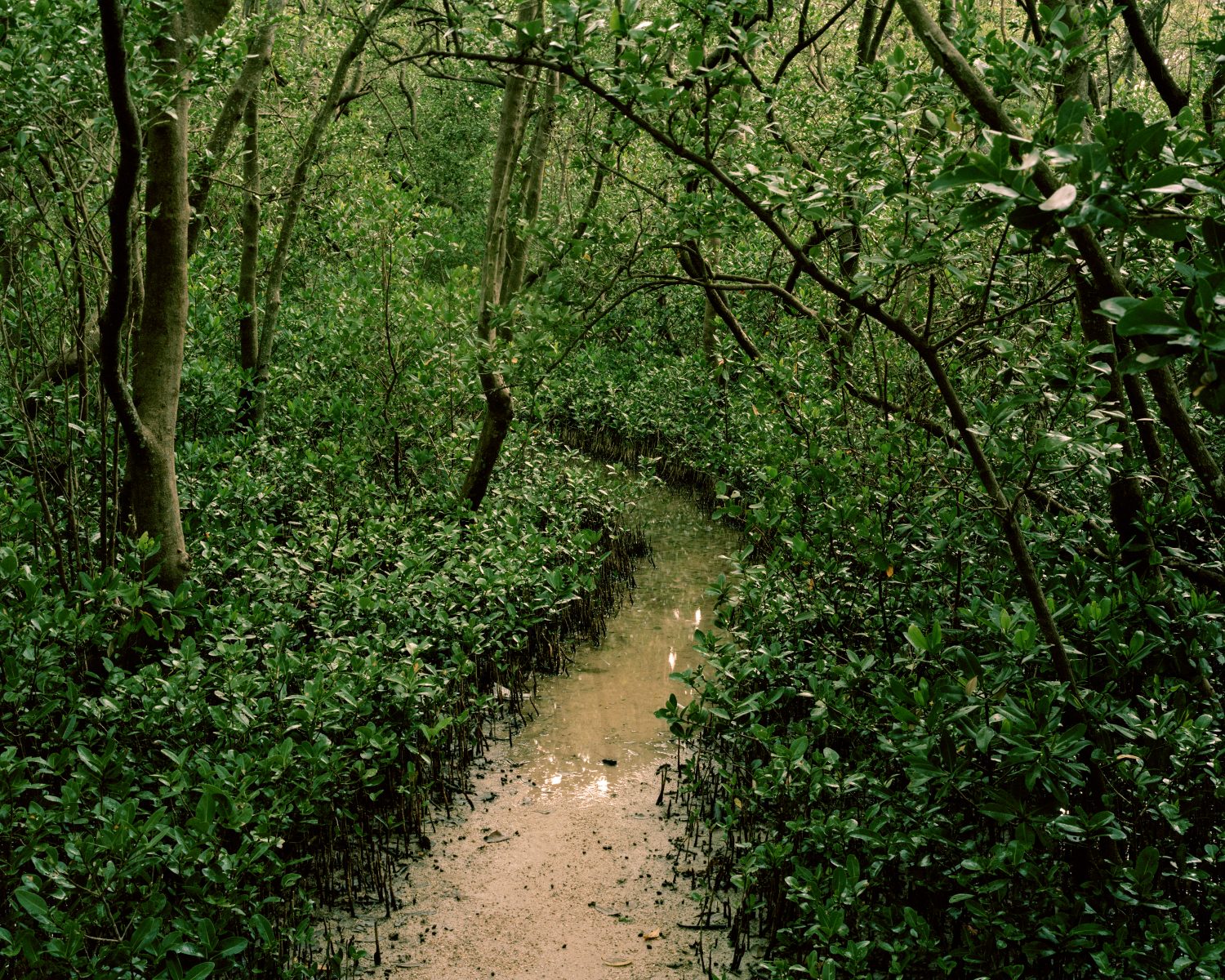 Mangroves outside of Ft. Myers, Florida. Mangroves, whose expansion is usually tempered by freezing winter temperatures in the winter, have been gradually increasing due to a decline in the number of days where temperatures fall below 25 degrees Fahrenheit. As they expand, they invade salt marshes and destroy the habitat of many organisms. 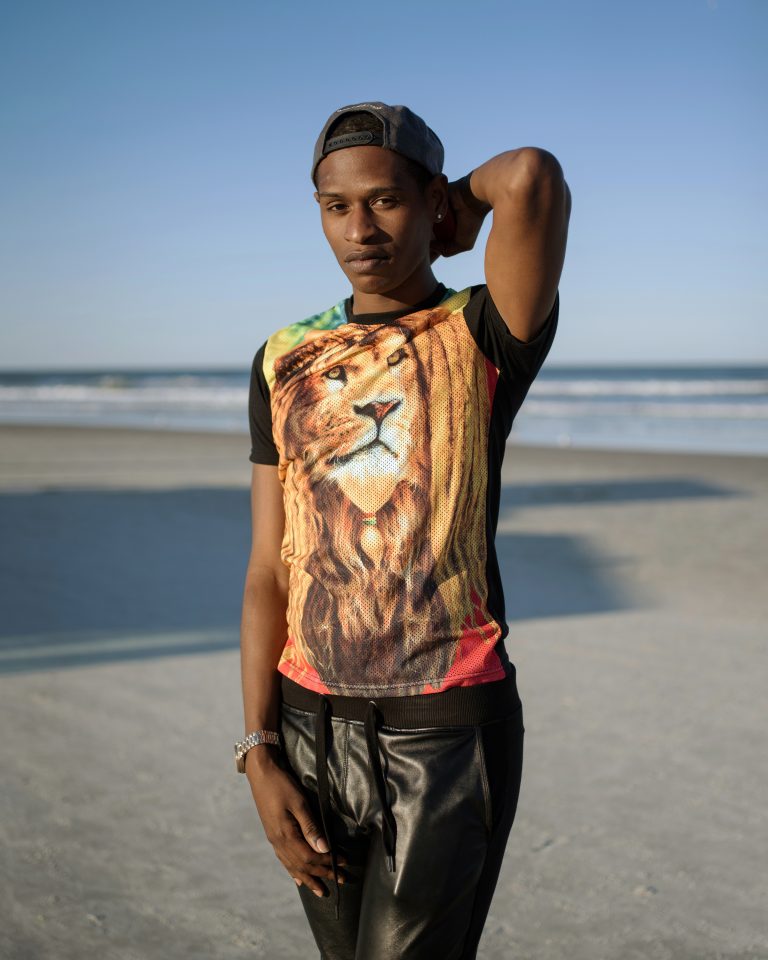 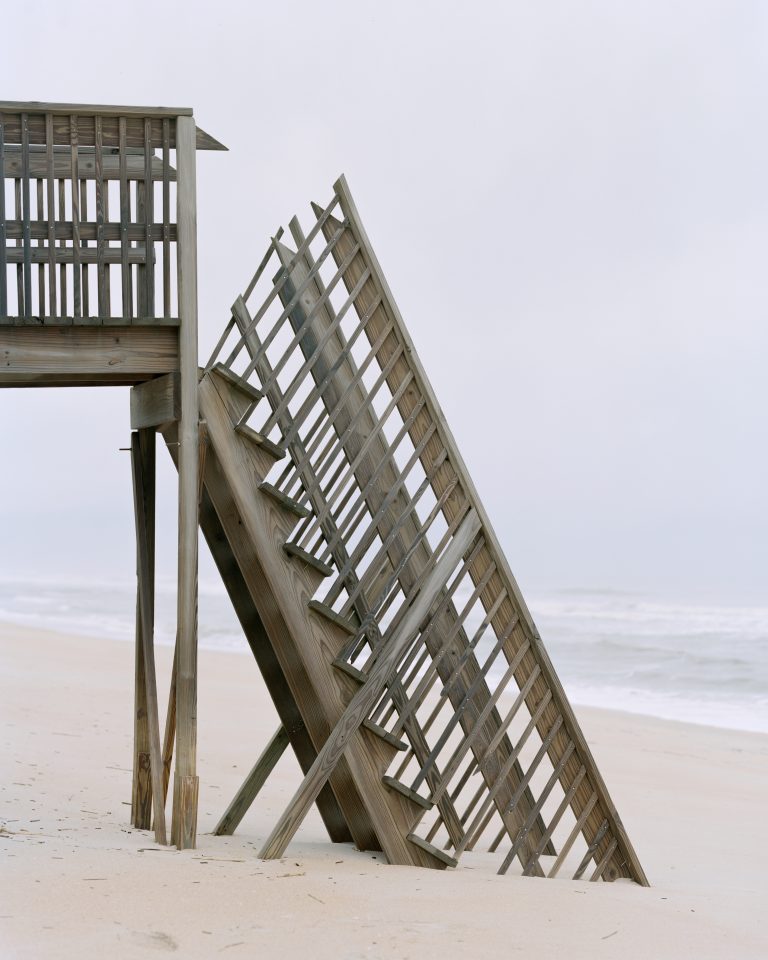 A destroyed flight of stairs descend into the sand on Vilano Beach, outside of St. Augustine, Florida, which, due to rising sea levels, now floods more than ten times a year.

BT: A billboard depicting a surfer gliding along a breaking wave becomes a premonition; a family, chest-deep in the Gulf of Mexico on a holiday weekend, becomes a portent. An idyllic postcard sent home from a bygone Florida vacation? Another piece of an expanding archive of blind folly in the face of great tragedy. 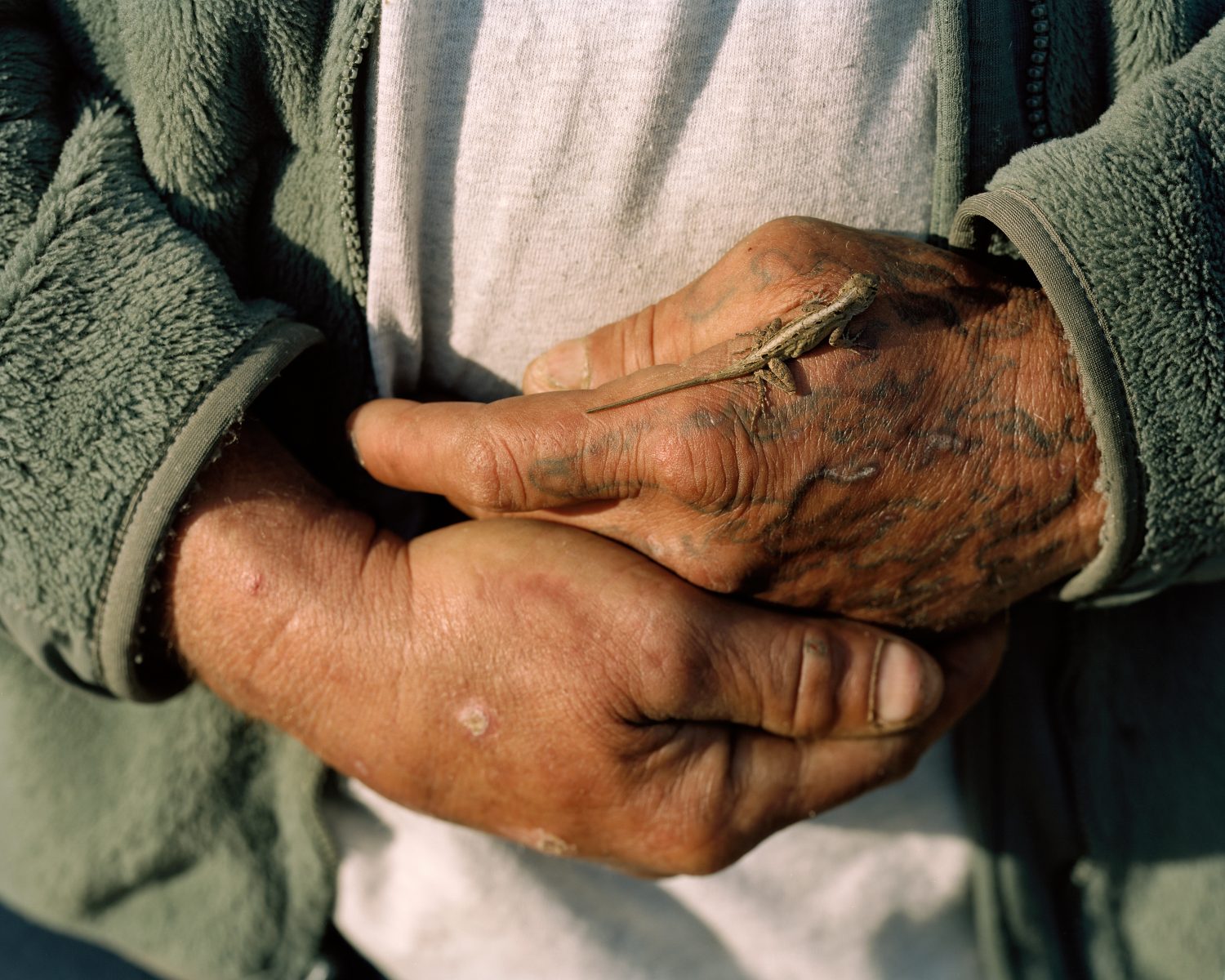 Oysterman and shrimper Erik Tatum holds a lizard in Apalachicola, Florida. Tatum, camps in a small tent next to the boat he works, as the city's once famed seafood industry has been decimated by drought and rising sea levels caused by climate change.

BT: When I return to Florida’s coast, I see the shadows of the memories that I made there. Shadows that lighten in relation to the certainty that these places will, one day, cease to exist. Photographing Florida now—through the lens of this foreboding research—is not only an attempt to illustrate that we will lose something, but also an indictment that we already have. When the water comes, we will lose homes, family, and friends, but the great sadness of climate change is that humanity—facing a disaster of its own making—now appears to be hardwired for loss itself. 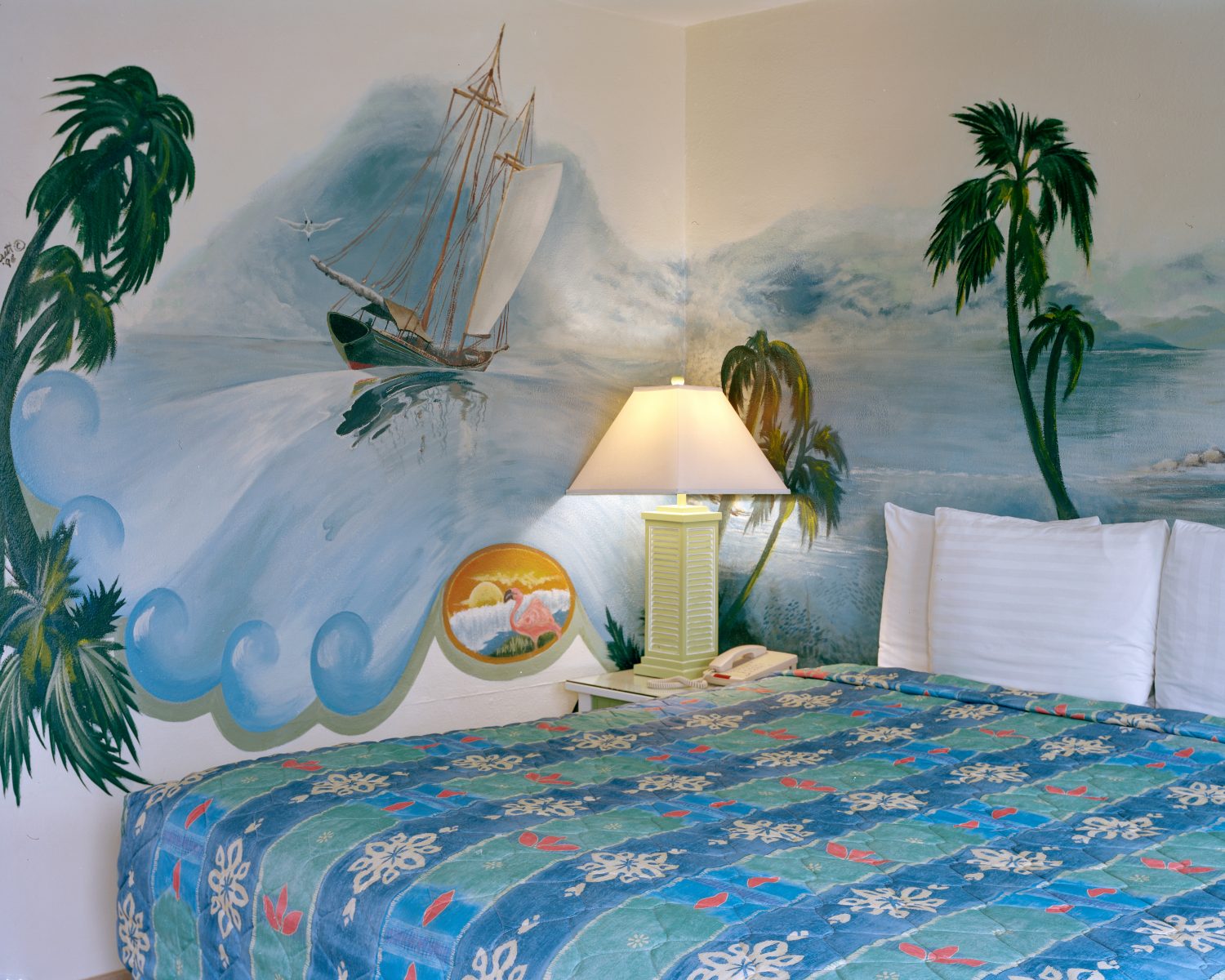 A mural on a bedroom wall at the Magic Beach Motel in Vilano Beach, outside of St. Augustine, Florida. 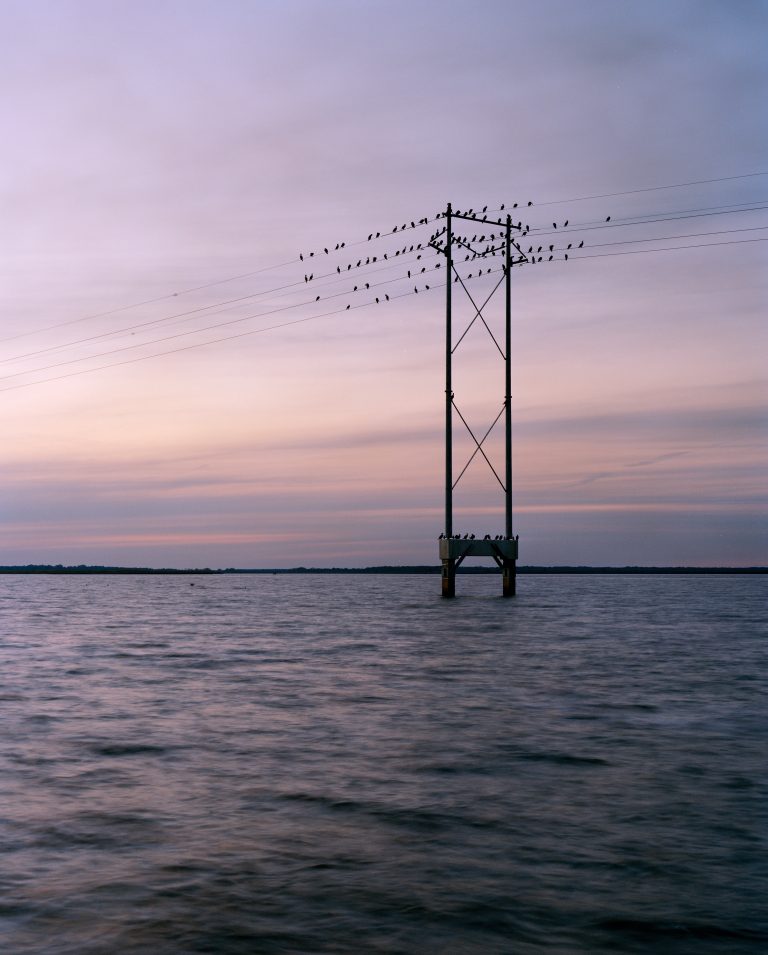 Birds rest on a power line outside of Apalachicola, Florida. 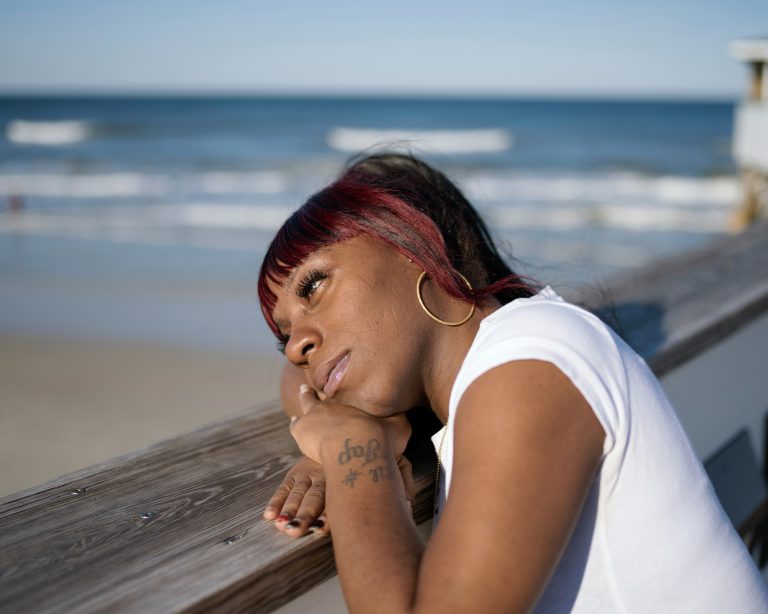 BT: Driving along the Gulf of Mexico, across the Everglades, and up the Atlantic Coast, The Sea in the Darkness Calls is a personal meditation on these melancholy whispers through the people and places of ‘The Sunshine State.’ It’s a search for the somber truths about the inevitability of loss, the shame of inaction, and the heavy burden of guilt left in climate change’s now-ineludible path. 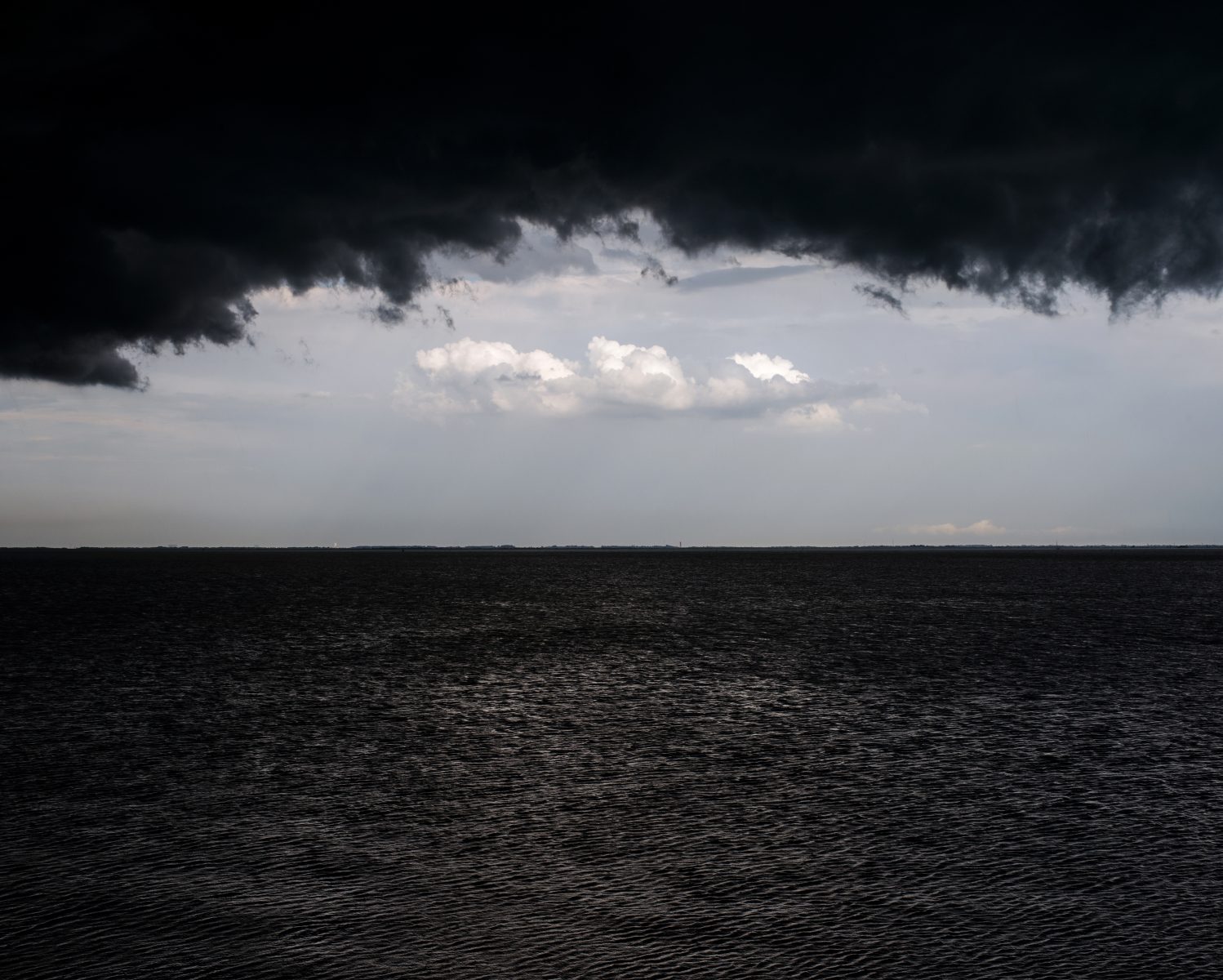 A storm gathers above the Indian River in Titusville, Florida. As the earth warms and sea level temperatures rise, the overall number of hurricanes has dropped, but their size and intensity has increased.

BT:
It’s a love letter and a eulogy to a place that will soon be as spectral as the very memories of it.