“Here I was at the end of America – no more land –
and now there was nowhere to go but back.”

― Jack Kerouac, On the Road

Road trips have been central to the evolution of American photography, but why? Perhaps it’s because the road is the single unifying element from to generation, one in which the continuities and changes in the land can be seen visually. If “road trip” photography truly exists as a genre in itself, then it includes everything from visual poetry to joy rides to political polemics and journeys of self-discovery. 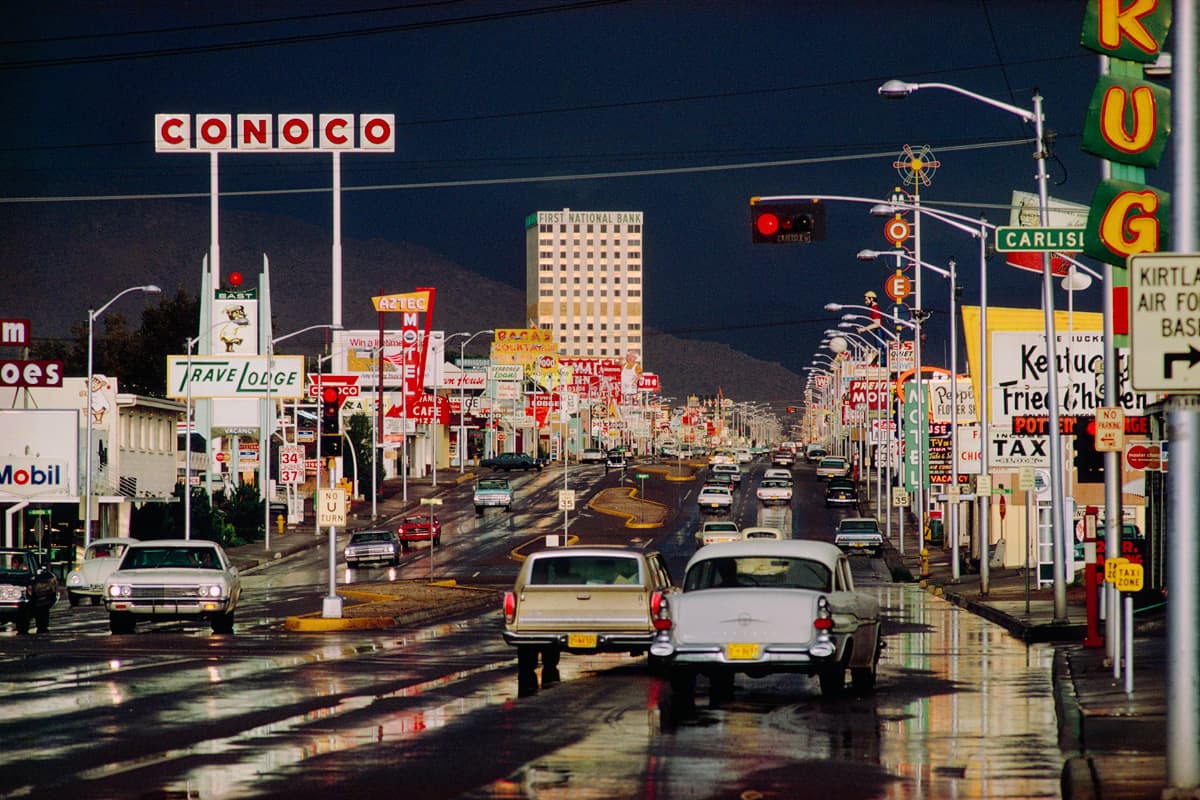 In the beginning there was Walker Evans, who never specifically made a project about the Open Road, but essentially was a road photographer, in that the car itself was integral to his work. Evans was particularly interested in exploring small towns and the idiosyncrasies within them, in the turbulent 1930’s.  His seminal book
American Photographs from 1938 gave birth to the idea that a travelling photographer could shoot and sequence a body of photographs to narrate a response to the nation as a whole.

His sensibility and influence is seen in all the subsequent projects of the great Americans of the road – in Robert Frank’s The Americans, Stephen Shore’s American Surfaces, Jacob Holdt’s American Pictures, Joel Sternfeld’s American Prospects, Doug Rickard’s A New American Picture, and later in developed by Justine Kurland, who elaborated on Evan’s idiom.

Perhaps the most important body of work to set the tone of  American “road” photography is The Americans by Robert Frank. Frank’s own worldview is clear in his work- he values honesty and avoids everything phony. The Americans is both a celebration and critique of Frank’s contemporary society, which was met bitterly by the critics of his day, but is now remembered as a masterpiece.

Funded by a government agency, Frank’s proposal was a hefty one: “The photographing of America’ is a large order—read at all literally, the phrase would be an absurdity.” In this period he shot over 27,000 images, which he later condensed to a mere 83, each image as powerful as the ones preceding or following them. They speak of the diverse, varied peoples and landscapes of the USA, the burden of the American dream, and the call to the wild innate within us all. 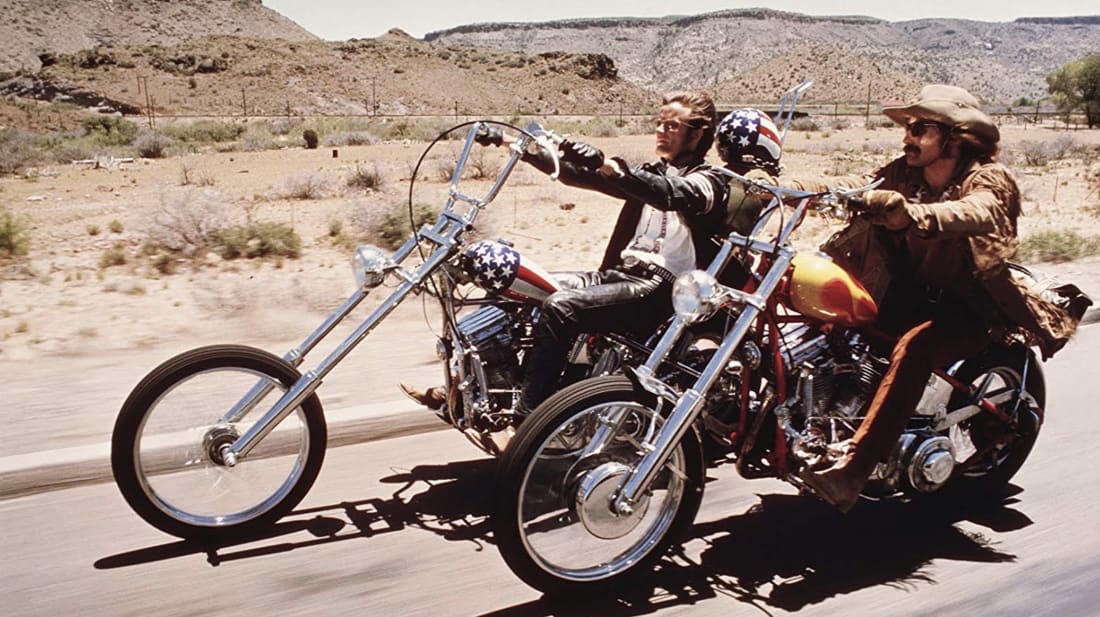 ‘Motoring’ and the road trip were marketed as consumerist experiences from the dawn of the automobile industry. Yet despite this fact, early road photography is often critical of consumerist culture and materialism. It’s as though “road” photography is informed likewise by both the hopes and disappointments of the USA as a great social experiment. Travelling photographers have repeatedly used this idea as a diving board, as if monitoring whether the experiment was a success or a failure. 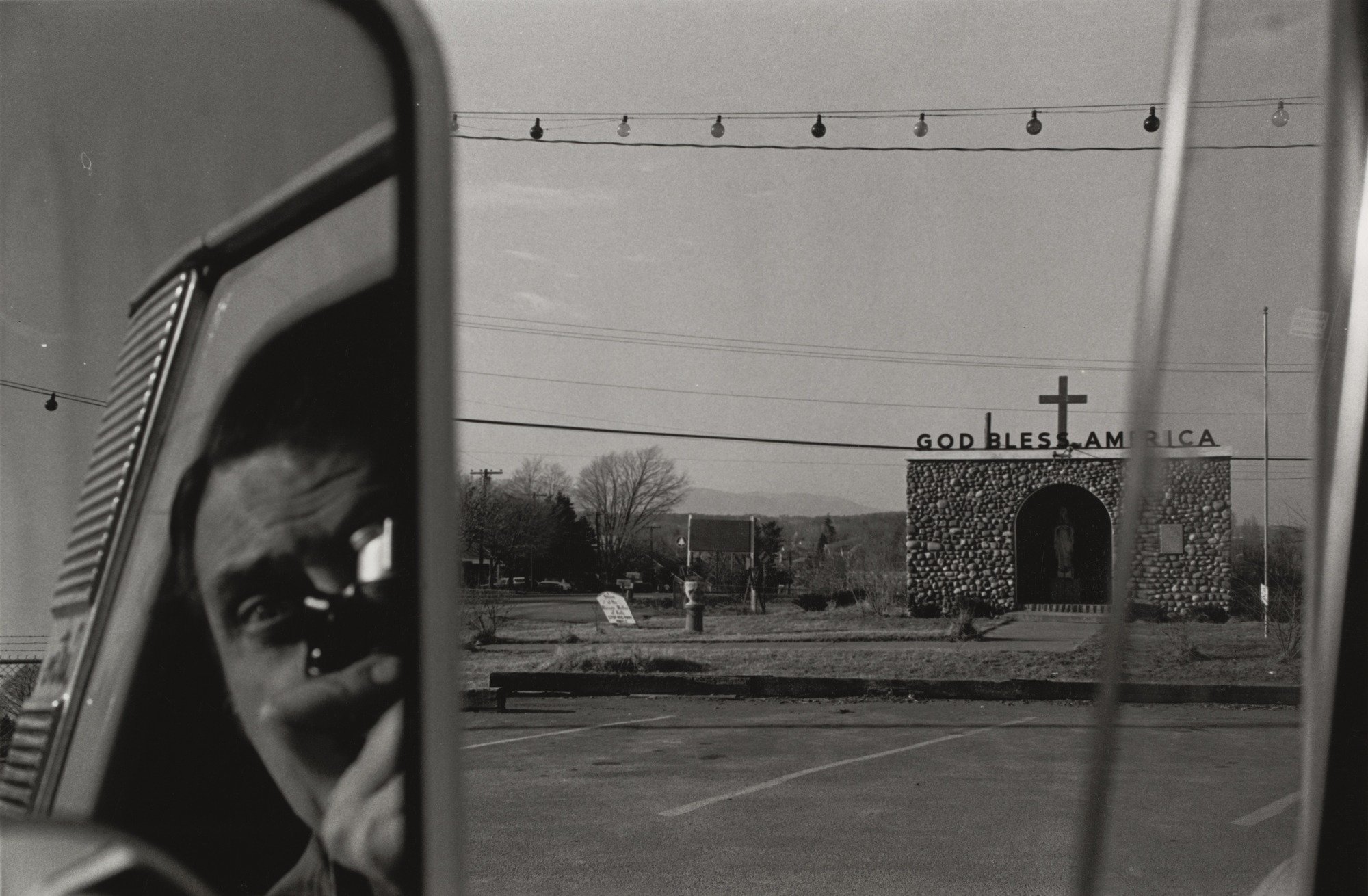 One of the most under-appreciated but likewise one of the most important projects to deconstruct this idea is Jacob Holdt’s American Pictures, a personal odyssey across the United States, in which he slept in more than 400 homes, ranging from the destitute to the extremely wealthy, for more than 5 years.

However, not all “road” photography from the 20th Century criticises the nation. Other photographers have attempted to show the freedom and flightiness that the American roads inspire.

One such practitioner was Danny Lyon, who, immersing himself within his subject matter, produced The Bikeriders, a seminal work of photojournalism, accompanied by a landmark collection of photographs and interviews documenting the abandon and risk implied in the name of the bike gang Lyon was part of- the Chicago Outlaw Motorcycle Club. The year was 1968 and Easy Rider still hadn’t made its way into the American consciousness. Lyon’s work heralded the dawn of the counterculture era, in full leathers and side view mirrors.

It’s certain visual tropes of Americana such as Lyon’s bike gang which now help cement the nation in our collective consciousness. America as we imagine it is full of cliches. They confirm our sense of possibility, our fears of inequality, our expectations of both the sublime and the banal. Through their work, the greats of American “road” photography have both helped fuel and deconstruct these cliches. 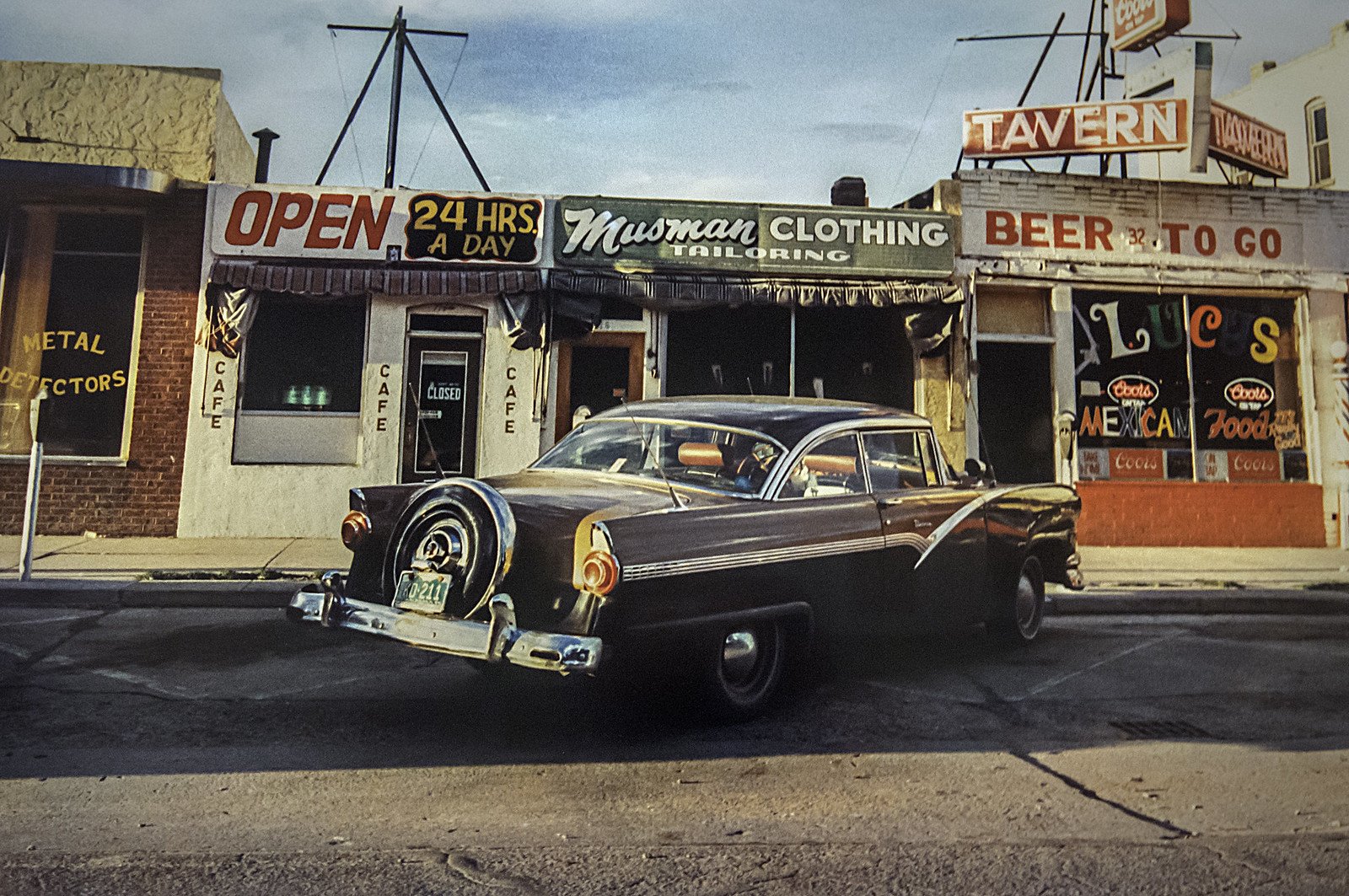 The grandfather of modern colour photography, William Eggleston, alongside Stephen Shore, particularly in his project American Surfaces, essentially catalogue these American tropes in both a poetic and regimented manner. Documenting everything from fast food meals to Cadillac cars, diners to dive bars, billboards to dashboards, these legends have created a visual encyclopaedia of what we consider modern America.

Later, both Stephen Shore, Joel Sternfeld and Joel Meyerowitz would go on to elaborate on these – depicting stranger than fiction scenarios which prove that America really is the land of infinite possibility. One recalls Sternfeld’s iconic image of a firefighter in a pumpkin patch as a house fire consumes a property in the background, an image consumed by orange. 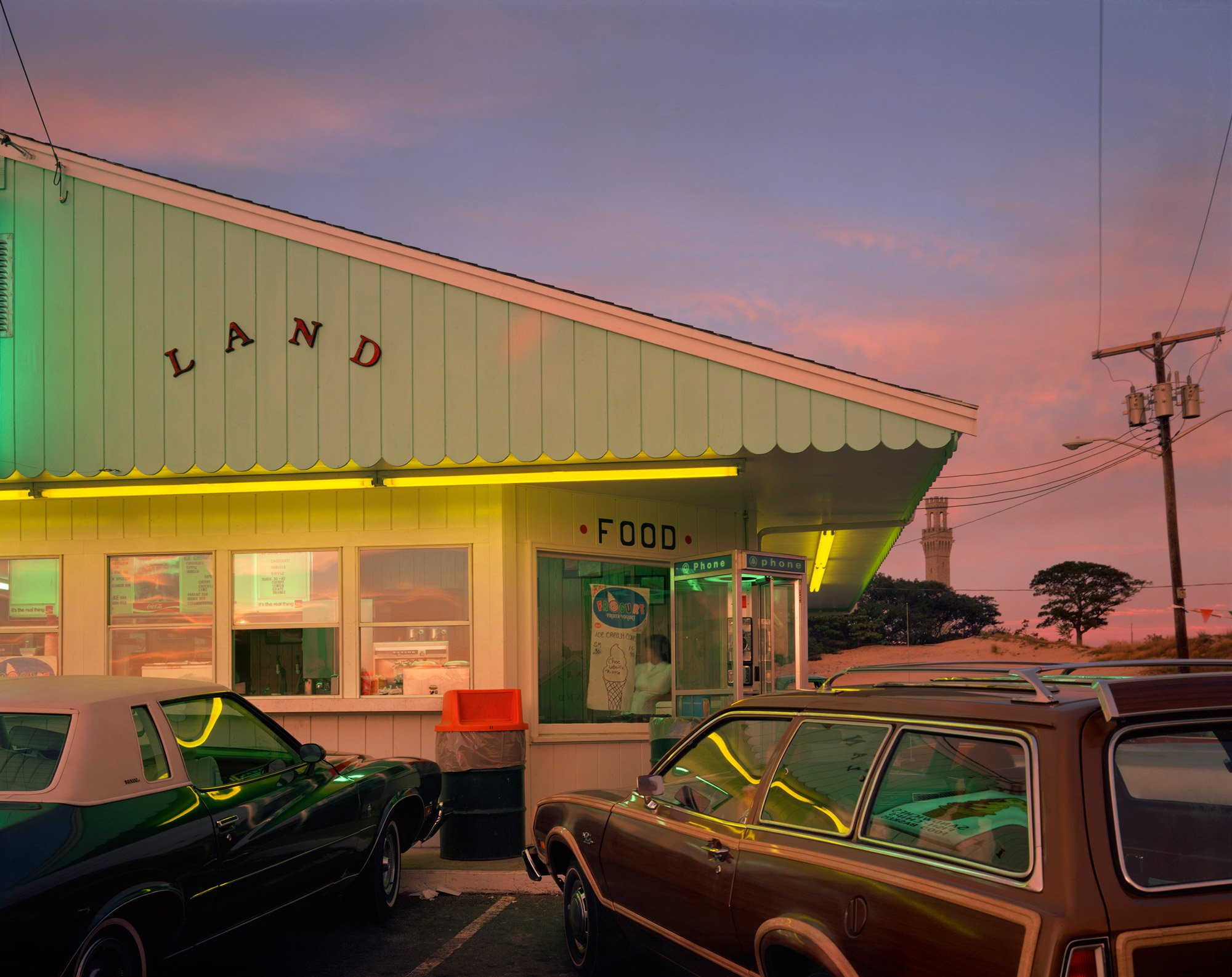 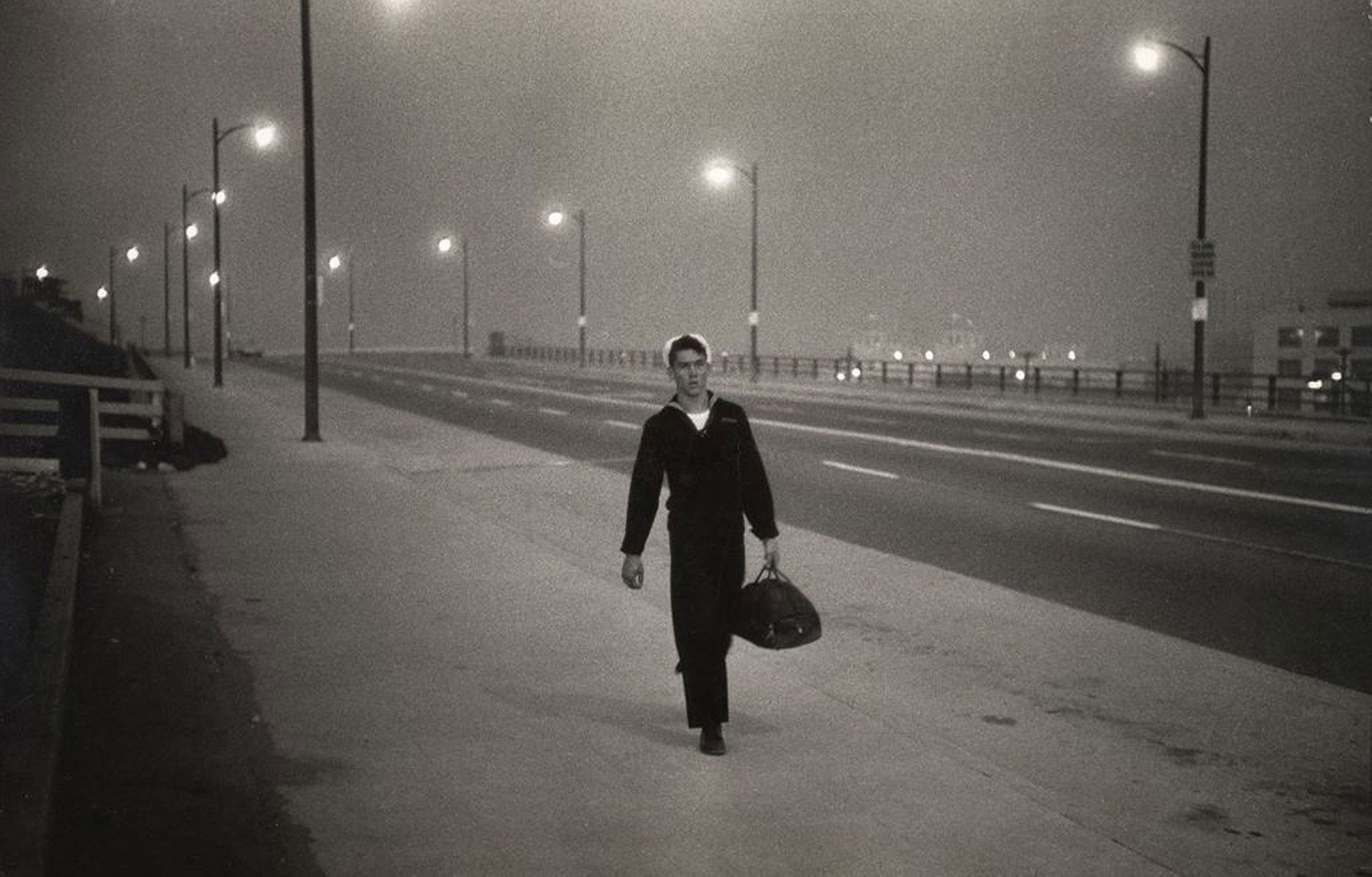 If one thing is certain of today’s USA it’s that there is no single way to define the country. Though these photographic legends the road provides a channel from the old world to the new, between mountains and canyons, from the skyscrapers of the east coast to the seashores of Big Sur, and thus may be the best way of reaching the “road” photographer’s ultimate destination- the truth of the nation, behind the curtain of the American Dream.